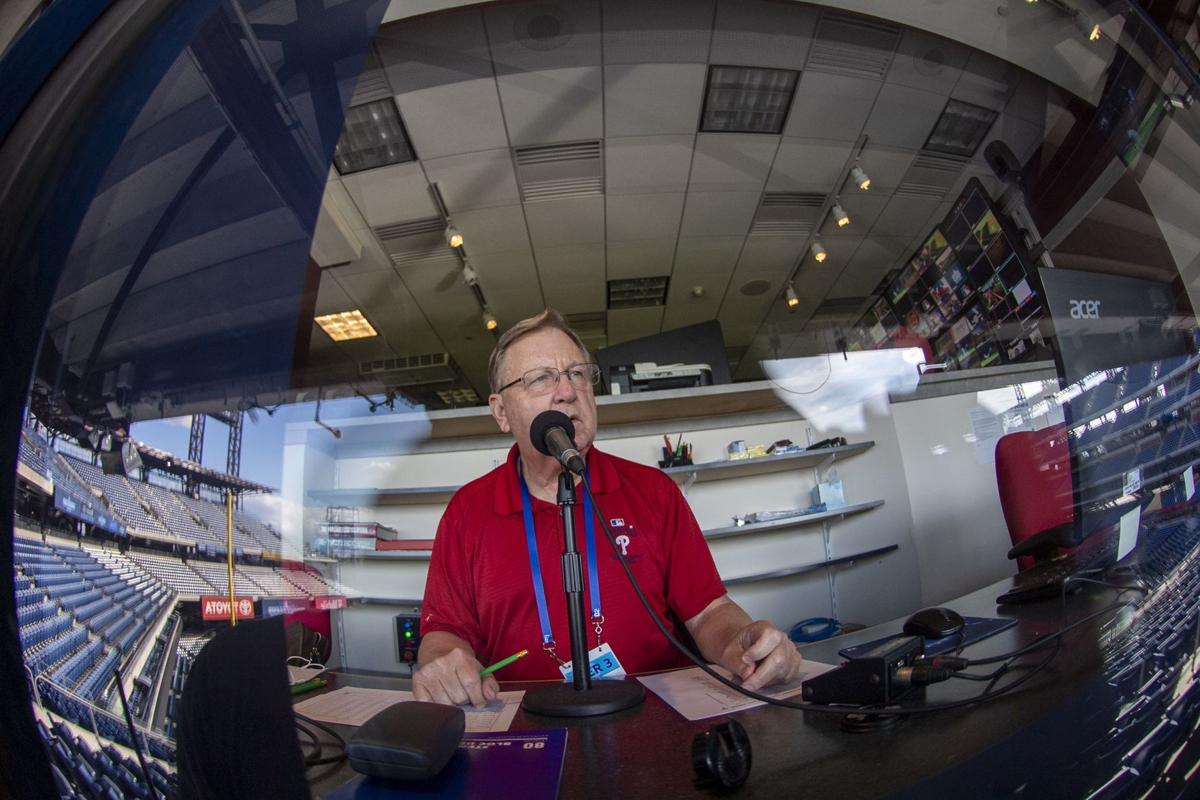 Dan Baker has been the Phillies’ longtime public address announcer since 1972, the team’s second season at Veterans Stadium. This would have been his 50th season doing Phillies games, but he did not work last season due to health issues. Below, the Gloucester County resident and annual Ocean City vacationer calls a 2011 Ocean City-Hammonton high school game. 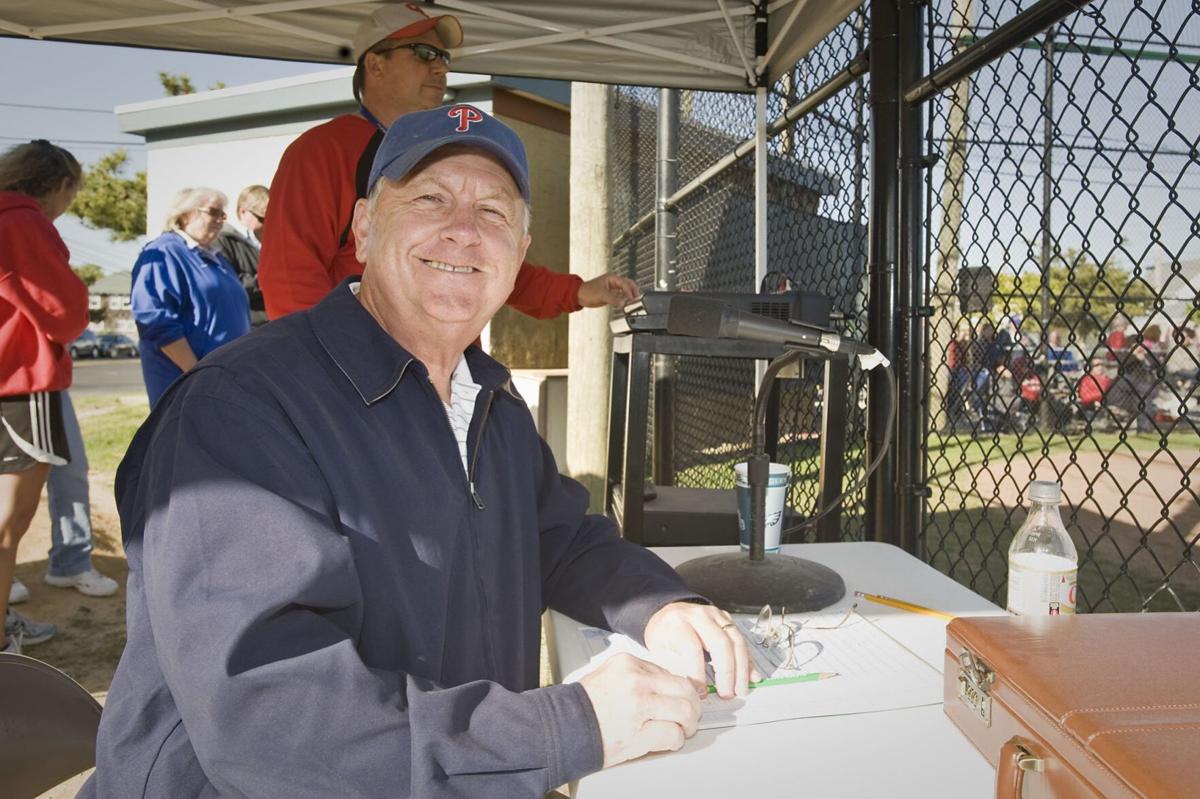 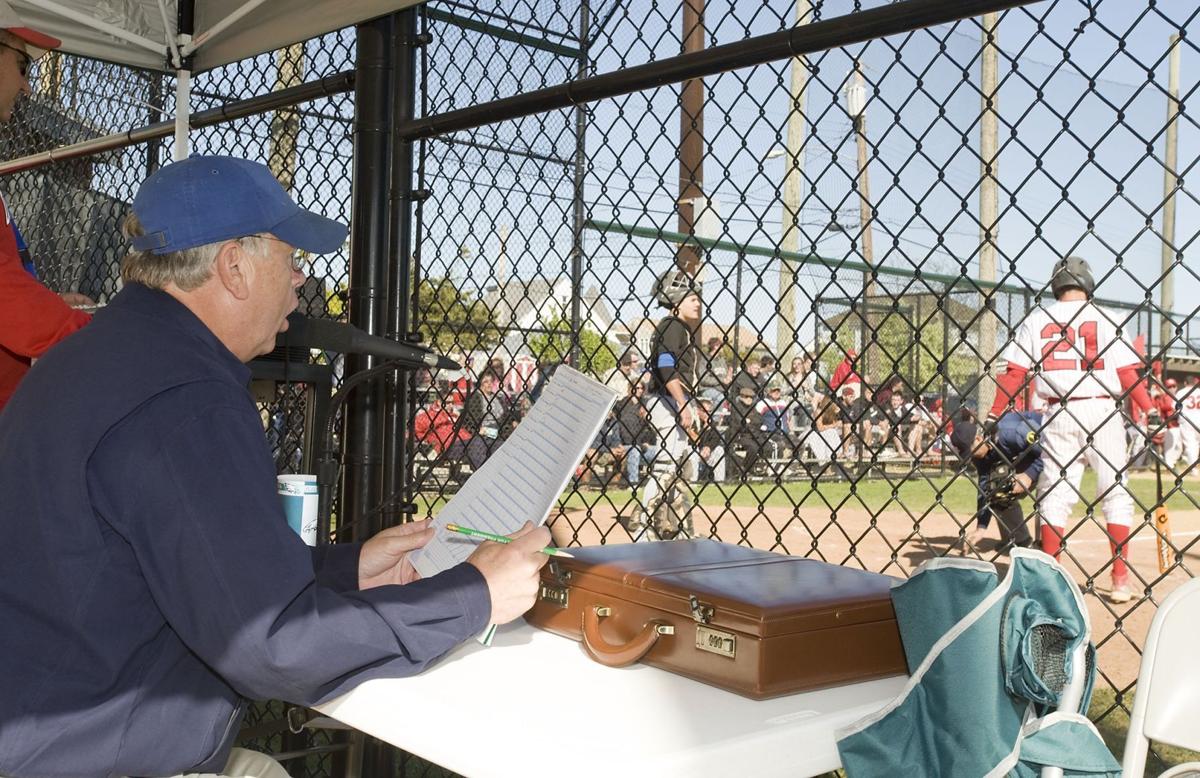 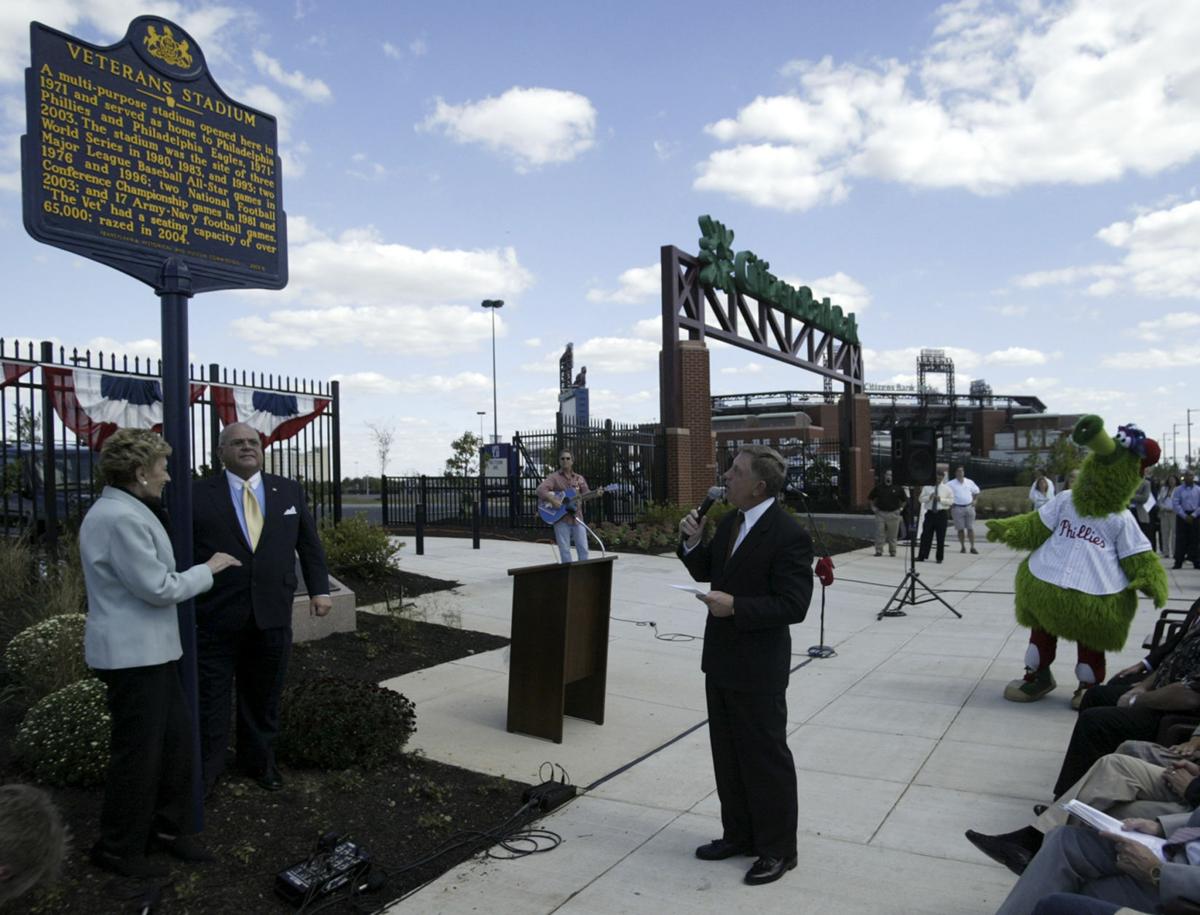 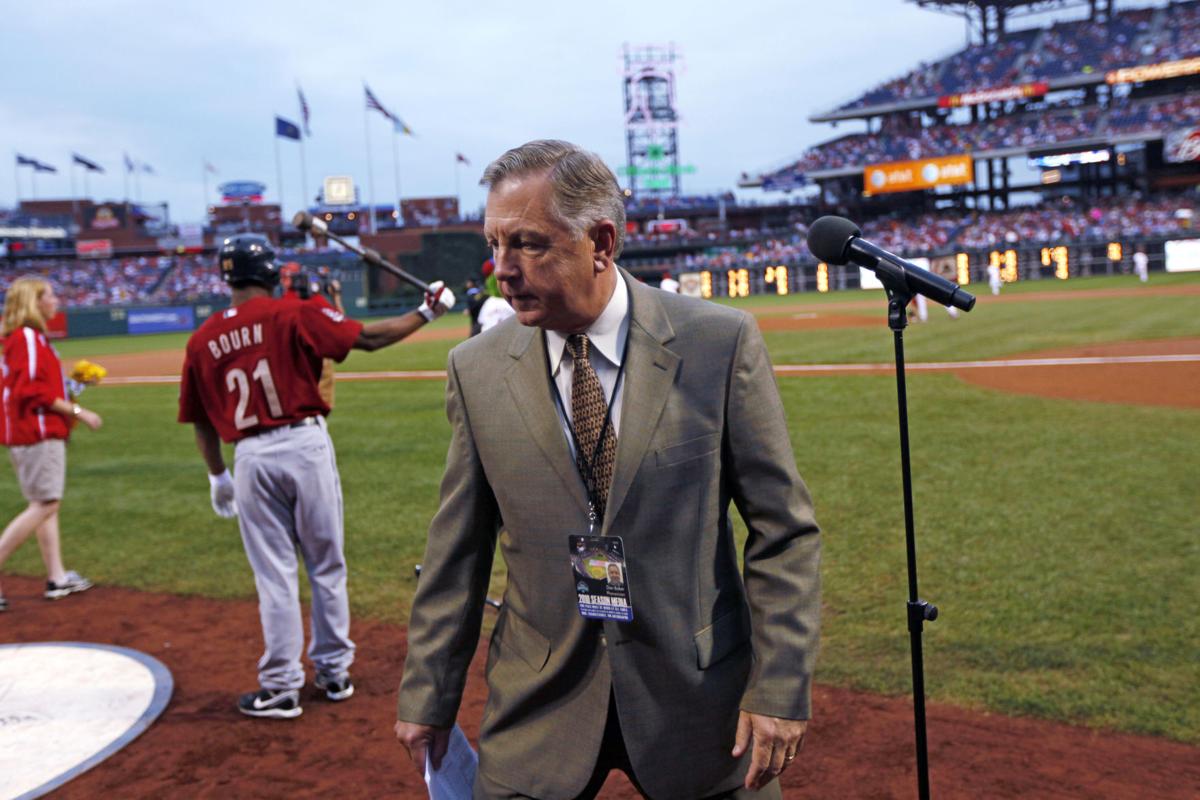 PHILADELPHIA — Fans were not the only thing missing at Citizens Bank Park last season. The familiar voice of Dan Baker, one of the friendliest human beings to ever inhabit this planet, was also absent.

“Now batting for the Phillies, No. 34, right fielder Bryce Harper!”

Close your eyes and you can hear Baker carefully enunciating each word before emoting the player’s name, which is especially true whenever a superstar like Harper comes to the plate in a crucial situation.

When Harry Kalas died a dozen years ago, the late Phillies President David Montgomery declared that the franchise had “lost our voice.”

The Phillies, however, actually had more than one voice. Baker has been the team’s public-address announcer since the team’s second season at Veterans Stadium, in 1972, making him the longest-tenured PA voice in Major League Baseball. Born in Philadelphia and raised in Mount Ephraim, he was 25 when he started. He is 74 now.

The upcoming season was supposed to be his 50th, but he now considers it his 49th because he was unable to work any games during the pandemic-shortened 2020 season.

“Two years ago, I had a series of operations in my sinuses and my mouth, and it ended up costing me 14 games,” Baker said during a recent phone interview from his home in West Deptford. “Those were the first games I missed at Citizens Bank Park, so that was a big disappointment.”

Baker, who was also the Eagles’ PA announcer from 1985 through 2014, said he had missed 15 games during his 32 years at Veterans Stadium.

“I thought the corrective measures we took would allow me to be fine last season, but the infection was a little deeper than that,” Baker said. “I had to go in for additional surgery, and it was more invasive than before. There were complications, and I ended up in the hospital for six weeks.”

Baker said a tumor was found in his right maxillary sinus.

“Obviously, it had to be removed,” he said. “It was a very lengthy surgery, and I had to have a couple follow-up surgeries after that. The folks at Jefferson Hospital did an excellent job. I just completed my 30th radiation treatment on Dec. 2, and I have certainly been improving day by day. I’m planning on being back in that scoreboard room this season.”

Without fans in attendance, the 2020 season promised to be odd from the start, but Baker had hoped to bring some normalcy by handling the PA duties from the PhanaVision studio on the Hall of Fame level at Citizens Bank Park. As always, he wanted to make sure he was prepared, so he worked four intrasquad games during summer camp and an exhibition game against the Baltimore Orioles. But before the July 24 opener against Miami, Baker’s health problems returned and worsened, leaving the PA duties to Scott Palmer and Gregg Murphy last season.

Baker is reluctant to talk about his illness because he does not want people to worry about him, but the truth is that his condition last summer was serious and scary for all the people who know and love him.

“He was greatly missed,” Phillies Executive Vice President David Buck said. “He is one of us. It was strange being at the ballpark with no fans, and then without Dan Baker it was super strange. He’s a big part of the Phillies.”

Like everyone in the Phillies organization, Baker watched Montgomery battle jawbone cancer and admired his strength and ability to work through it.

“The way he carried himself through those five years when he was battling his illness was just remarkable, especially when you consider all the things he continued to accomplish during that time,” Baker said. “He was such a great example for everybody. He was still so considerate of everyone else, and everybody who knew David liked him.”

The same can be said about Baker and, like Montgomery, he has also shown incredible courage even if he does not want to admit it.

“There are so many things going through your mind, but you just react and do what doctors tell you to and follow their directions,” Baker said. “You’re not left with much of a choice, so I tried to do that, and I think I have a pretty strong constitution.

“In the back of my mind, I knew it was going to be a challenge, but I don’t think I did anything out of the ordinary. If an obstacle is thrown in your path, you try to overcome it. You can’t give up. I never thought in terms of the worst. I felt like I’m going to overcome this, and not only that, I also want to get back to the job I love, which is so important. I don’t want to convey I was in desperate shape. I never felt that. I always felt very optimistic and resolved that everything will turn out well.”

Like so many of us, Baker fell in love with baseball when his father took him to his first game as a child.

“The smell of the hot dogs, the cigar smoke, the popcorn, and the excitement,” Baker said. “It’s just people enjoying themselves, and that’s like heaven to me.”

For the last half-century, Baker’s voice has been an integral part of the ballpark experience in Philadelphia and he has promised he will return on opening day in 2021.

“I’m taking my cue from Dan,” Buck said. “If he’s encouraged, I’m encouraged. The microphone is his whenever he is ready for it. I hope he can do all 81 games, but if he needs every other day off, that’s fine, too. We are open to whatever Dan wants and needs to do.”

When Dave Dombrowski sat down to lunch with then-free agent J.T. Realmuto on Dec. 23 in Norman, Oklahoma, he brought along a message from Phil…

Philadelphia Phillies manager Joe Girardi said last week he wanted someone to take charge of the competition for the center field competition.

Is the way Bryce Harper cares enough to lead Phillies to the postseason?: Must Win

Bryce Harper’s talent and hustle makes him one of the Philadelphia Phillies’ most popular players.

Denny Brady is set to make his second straight appearance in a big-league training camp.

Spencer Howard seems to believe the Philadelphia Phillies didn’t see the best of him in 2020.

Manager Terry Francona says no one within the organization deliberately covered anything up for former pitching coach Mickey Callaway following a report of new allegations of inappropriate behavior during Callaway's time with Cleveland.

Dan Baker has been the Phillies’ longtime public address announcer since 1972, the team’s second season at Veterans Stadium. This would have been his 50th season doing Phillies games, but he did not work last season due to health issues. Below, the Gloucester County resident and annual Ocean City vacationer calls a 2011 Ocean City-Hammonton high school game.