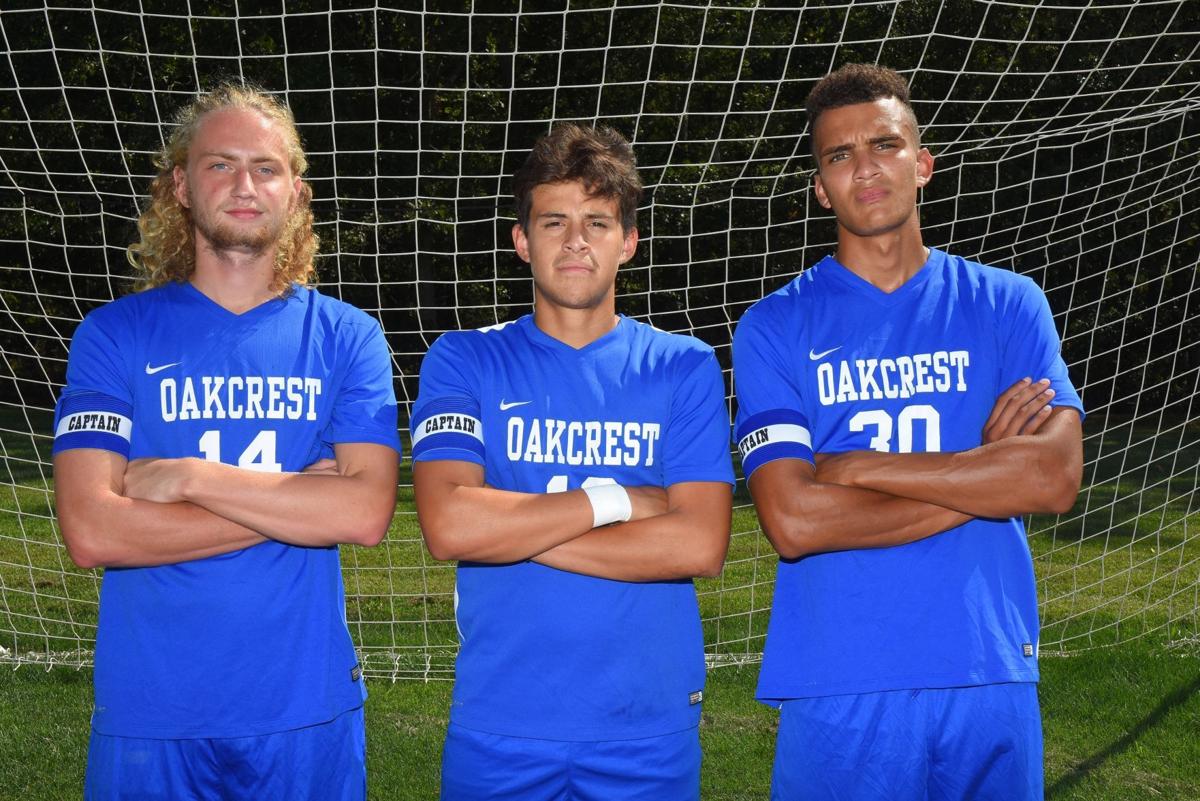 From left, Shawn McCourt, Gabe Paz and Mason Stokes. The three Oakcrest High School graduates will have to wait until spring to make their collegiate soccer debuts. 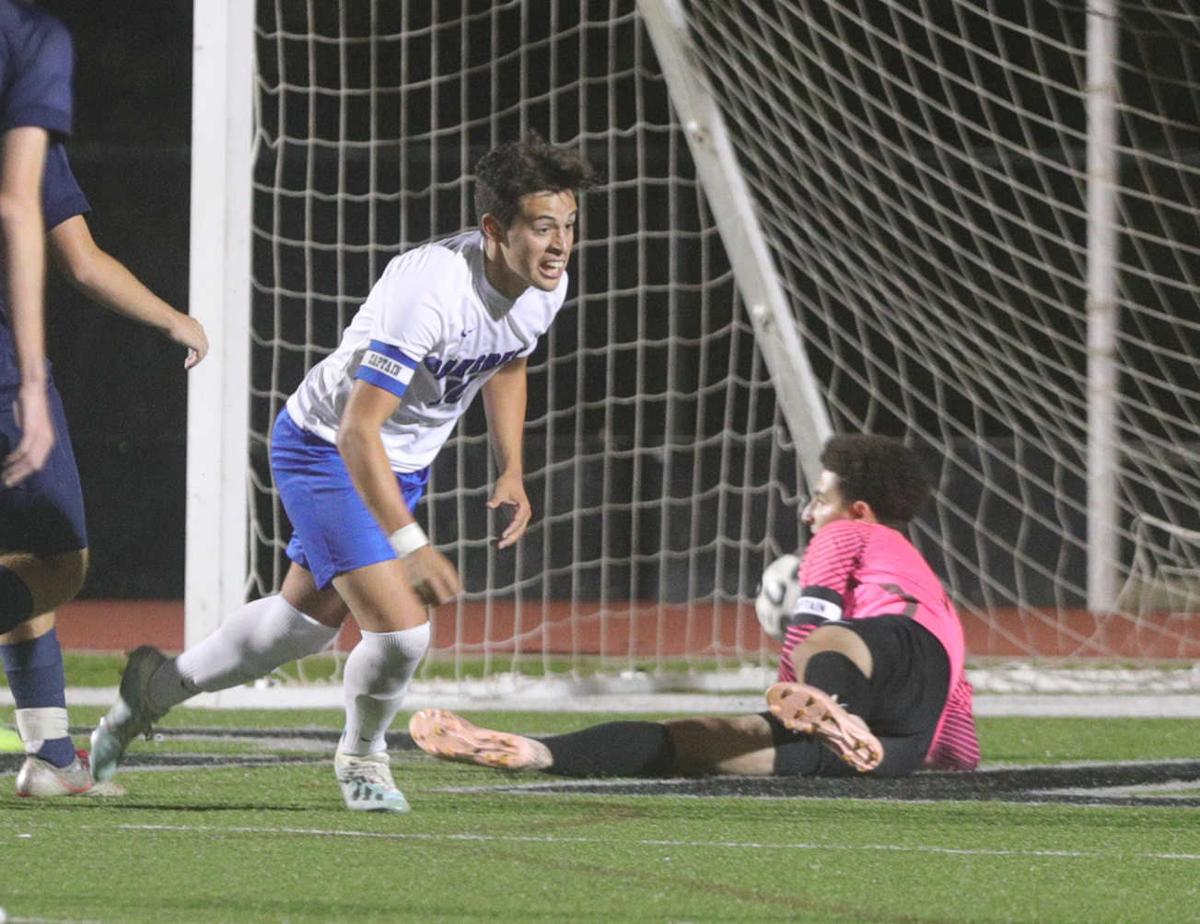 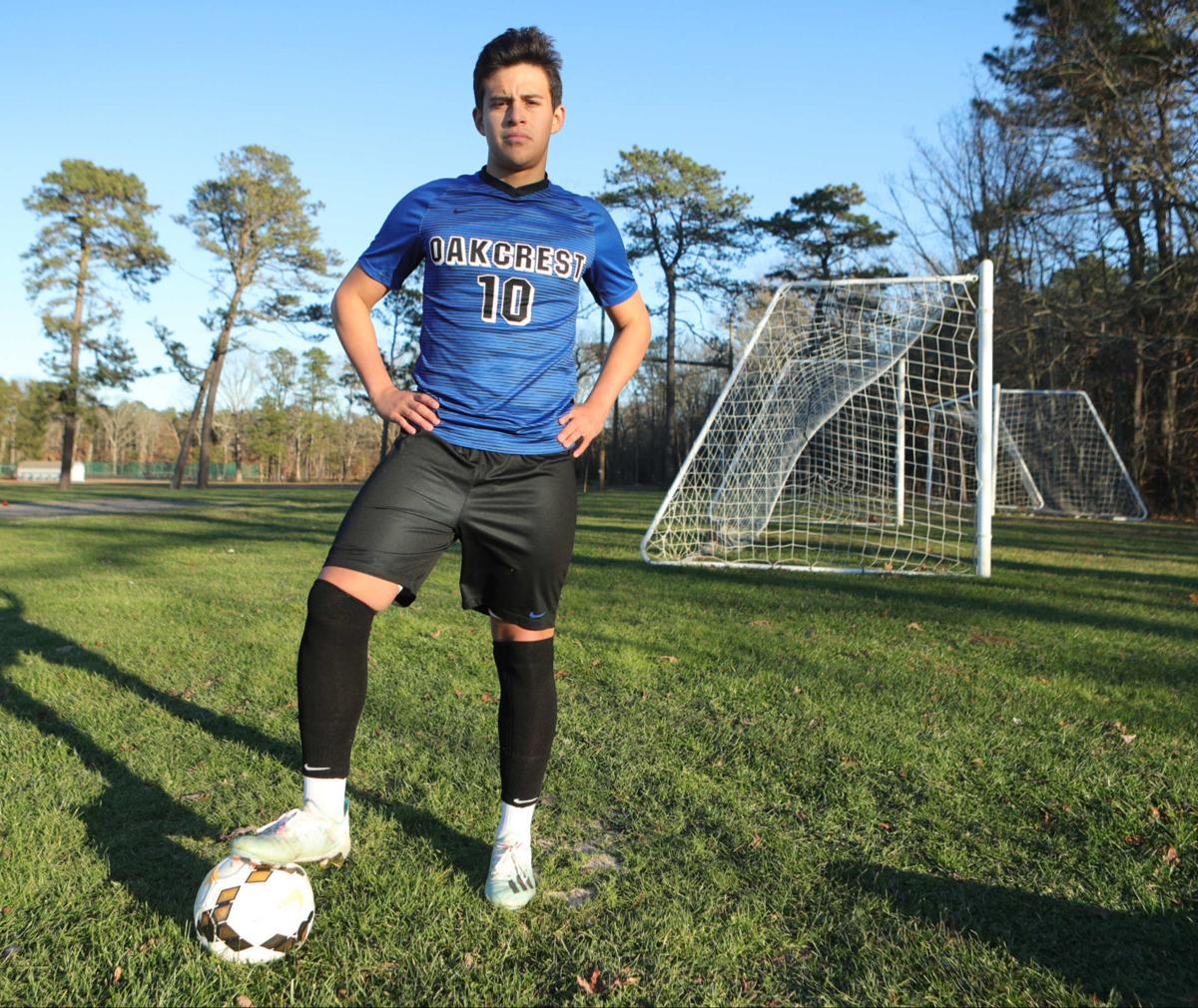 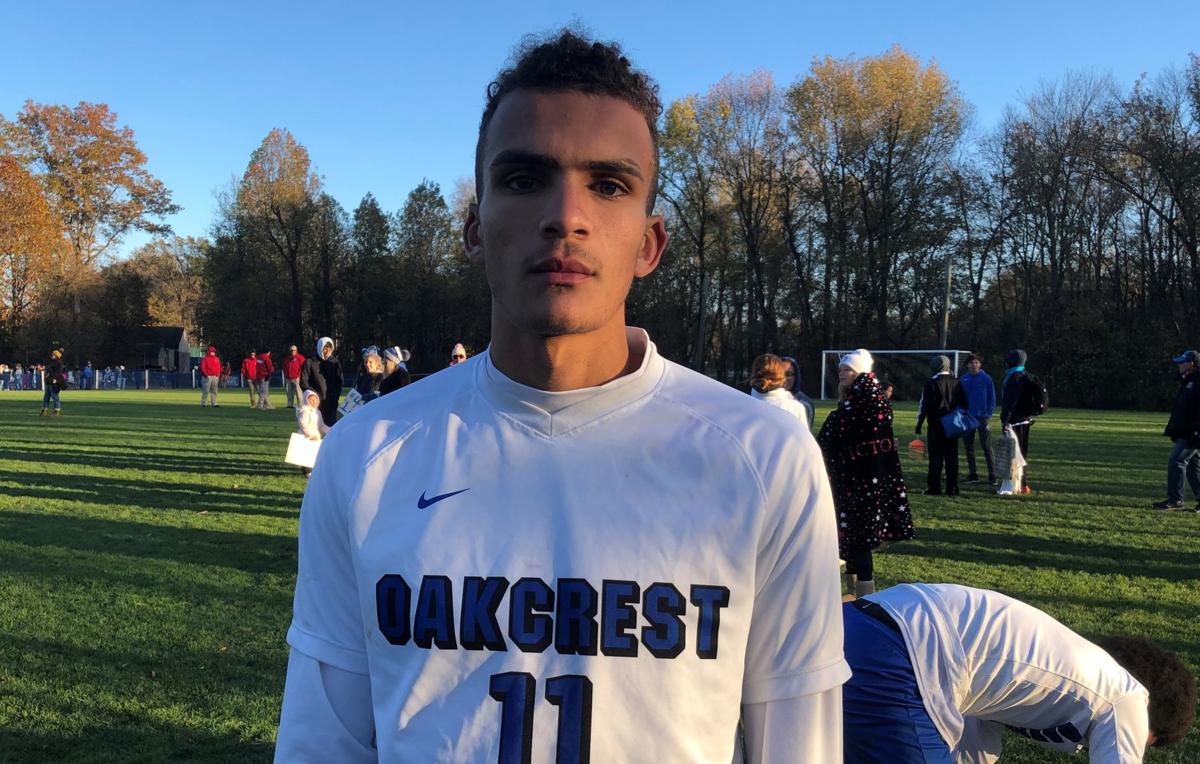 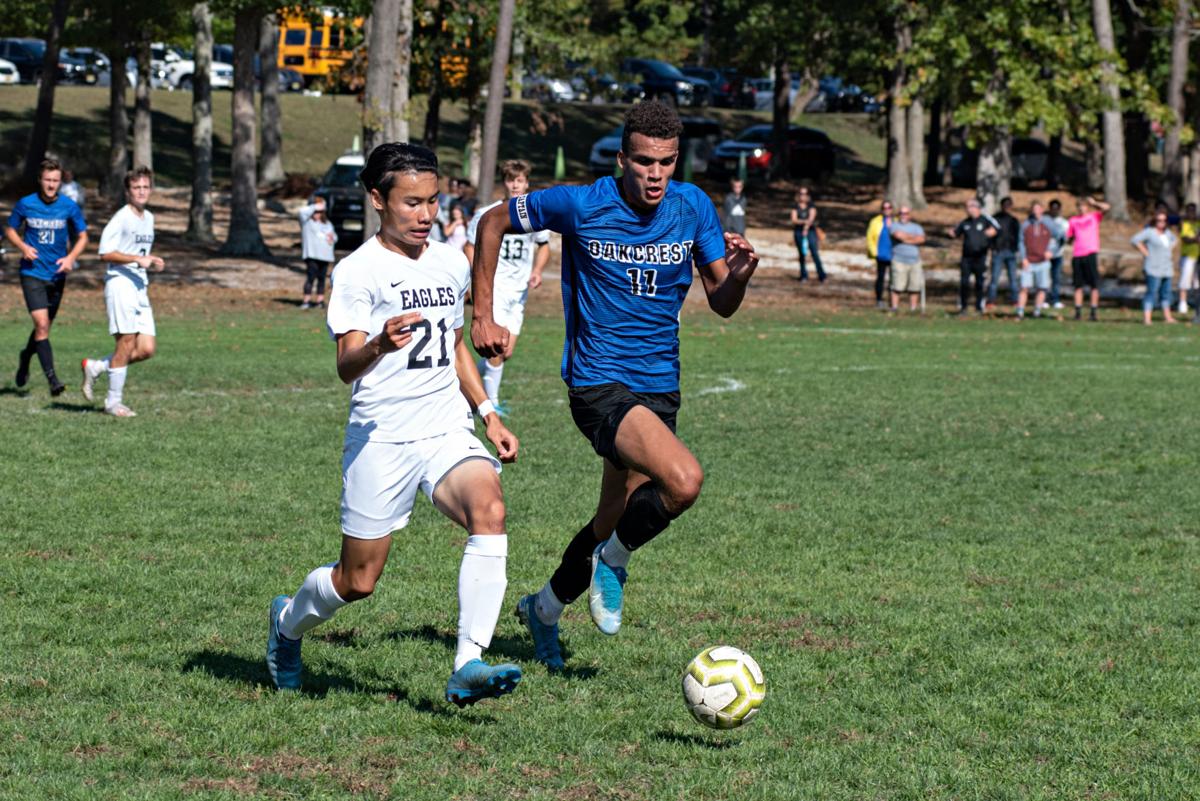 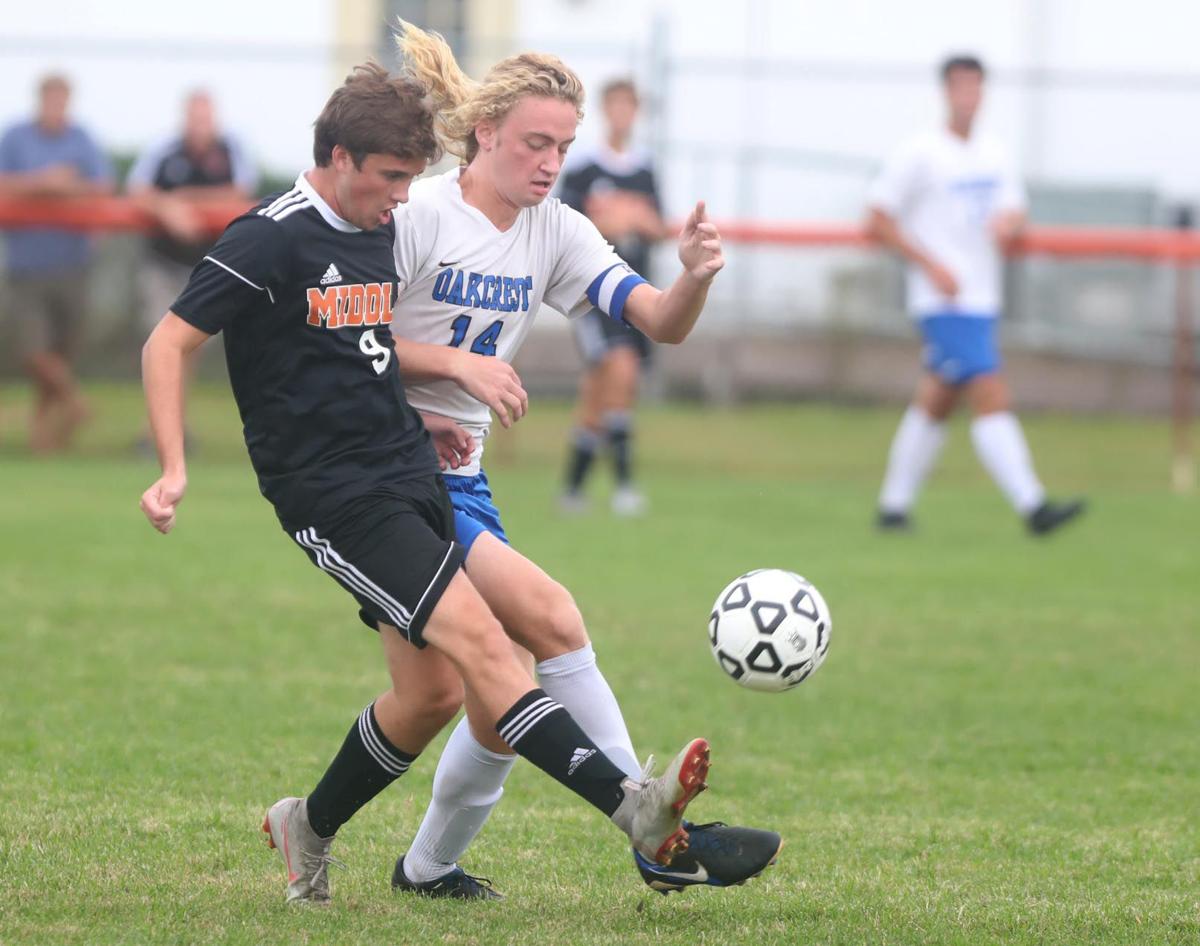 But they’ll have to wait a few months.

Paz, Stokes and McCourt, all first-team Press All-Stars last fall, have each seen their fall college soccer seasons moved to the spring due to the COVID-19 pandemic.

Paz, a forward who was The Press Boys Soccer Player of the Year in 2019, is at Thomas Jefferson University in Philadelphia. Stokes, also a forward, attends Shippensburg University in Shippensburg, Pennsylvania. McCourt, a center back, is at Tiffin University in Tiffin, Ohio. All three soccer teams are NCAA Division II programs.

The three Oakcrest graduates are all 18-year-old Mays Landing residents who were four-year varsity players for the Falcons.

“It’s really disappointing that they moved the season to the spring,” Paz said. “It’s definitely weird because I’ve never played in the spring, but it’s still something you can prepare for. I’m ready to get out there. We might have the opportunity to have a year added on. It’s still in discussion.”

Paz is receiving a partial athletic scholarship that covers most expenses. He committed to Jefferson this winter.

“Jefferson is really the only college I visited,” Paz said. “The campus is nice. It’s really close (to home), and my parents (Luis and Johanna) can come watch me play. Jefferson plays competitive soccer, and they had my major (physical therapy), so it looked like the right spot.”

Paz scored 27 goals and had a team-high 16 assists in 2019 to lead Oakcrest to an 18-4-1 record and the Cape-Atlantic League Tournament championship. He scored the winning goal in overtime to give the Falcons a 2-1 win over St. Augustine Prep in the CAL Tournament final. Oakcrest finished ranked No. 5 in The Press Elite 11. The Falcons also won the CAL National Division title.

In four years for Oakcrest, Paz had 72 goals and 32 assists.

“The coach is looking for a big season,” Paz said. “We got a couple Division I transfers and five or six freshmen.”

Stokes is starting out with a partial academic scholarship. He committed to Shippensburg in the summer. He’s majoring in business.

“I got close with the team when I visited Shippensburg, and it reminded me of Oakcrest, like a family,” Stokes said. “I stayed two days, and they showed me around.”

Shippensburg, a member of the Pennsylvania State Athletic Conference, went 10-3-4 two years ago but dropped to 2-10-3 last year.

“They had a lot of injuries last year and didn’t do too well,” Stokes said. “This year, there’s about eight freshmen and six sophomores and a good mix of juniors and seniors.

“When coach (Jeremy Spering) told us we weren’t playing this (fall) season, I was devastated. But it is what it is. I’ll try to stay in shape for the spring. I think we’ll be decent. They plan to have a half-season.”

At Tiffin, McCourt will receive a partial scholarship that’s both athletic and academic. He committed in March and is majoring in sports management.

“I wanted to go to a school with a strong soccer program, and they’ve made the NCAA Tournament the last couple years,” McCourt said. “I also wanted to travel out of New Jersey. It’s (Tiffin) a pretty good area, and the campus is small and nice. The school is an hour from Lake Erie, which has a giant beach but no waves.”

As a defensive leader for Oakcrest, McCourt helped the Falcons earn seven shutouts in 2019, and 23 during his four years. He added a goal and two assists last fall and had four goals and eight assists in his scholastic career.

Tiffin, a member of the Great Midwest Athletic Conference, went 11-5-5 in 2019 and won its second straight conference championship. The Dragon has made the NCAA Tournament three of the last four years.

“We have a second team and a first team, and I’m with the first team right now,” McCourt said. “It’s different to play in the spring, but we’ll have more time to get ready.”

The senior scored a team-leading 27 goals, including the game-winner in overtime to beat St. Augustine Prep to capture the Cape-Atlantic League Tournament title. Paz, who added 16 assists, led the Falcons (18-4-1) to their best finish in program history, which included a trip to the South Jersey Group II finals. Paz finished his career with 43 goals and 32 assists.

The junior scored a team-leading 27 goals and added 15 assists to lead the Eagles to the S.J. Group IV finals.

The sophomore scored 22 goals for the Greyhounds, who captured the CAL United Division title. He also had nine assists.

The senior scored a team-leading 33 goals and added six assists. Dougherty finished his career with 66 goals and 15 assists.

The senior scored a team-leading 24 goals, eclipsing the 50-goal career mark. He also had five assists. Gardner finished his career with 56 goals and 15 assists.

The junior scored 21 goals and added six assists. He will enter his senior campaign next season with 35 career goals and nine assists.

The senior had 13 assists and scored 12 goals for the Falcons. He finished his career with 28 assists and 26 goals.

The senior scored a team-leading 17 goals to lead the Hermits to capture their first S.J. Non Public A title since 2010. He also had an assists.

The senior scored 19 goals and had 13 assists to lead the Colts to the S.J. Group III quarterfinals. For his career, he has 20 goals and 13 assists.

The senior had a team-leading 24 goals for the Greyhounds. Casco-Quintanilla also had 23 assists.

The senior 19 goals, which broke a 42-year program record for most goals in a single season. He also had two assists. He finished his career with 33 goals, which is the second-most in program history.

The junior scored 20 goals and had two assists. He was named both the Ocean County and Shore Conference A South Player of the Year.

The senior scored 14 goals and had two assists. He finished his career with 26 goals and seven assists.

The senior score 14 goals and added six assists to lead the Mustangs to the S.J. Group III semifinals.

The junior led the Eagles defense to seven shutouts. With his help, EHT advanced to the South Jersey Soccer Coaches Association quarterfinals. He had seven assists and scored once.

The senior was a major part of the Hermits' defense that had 11 shutouts. He also contributed on offense, scoring six goals.

The senior was the leader on a Rams defense that posted nine shutouts and allowed 13 goals in 18 games. He he had two assists and scored once to lead the Rams to the S.J. Group IV and Shore Conference quarterfinals.

The senior was dominate for the Hermits, typically defending the oppositions best player. Kitch also scored four goals. His efforts carried his team to the state Non Public A title game for the first time since 2010.

The senior anchored the Falcons defense to seven shutouts. McCourt also added two assists and a goal. For his career, he led the defense to 23 shutouts and scored four goals.

The Hammonton High School football team will not play the next two weeks because of COVID-19.

MILLVILLE — An exciting game between the Middle Township and Millville high school field hockey teams went back and forth Monday.

Black sea bass and tautog fishing has been excellent

Great fall weather brings out the fishers, and fishing is great, too.

Eagles reportedly won't have Miles Sanders or Zach Ertz for Thursday vs. NYG

When running back Miles Sanders and tight end Zach Ertz had to leave Sunday’s loss to the Baltimore Ravens with knee and ankle injuries, respe…

From left, Shawn McCourt, Gabe Paz and Mason Stokes. The three Oakcrest High School graduates will have to wait until spring to make their collegiate soccer debuts. 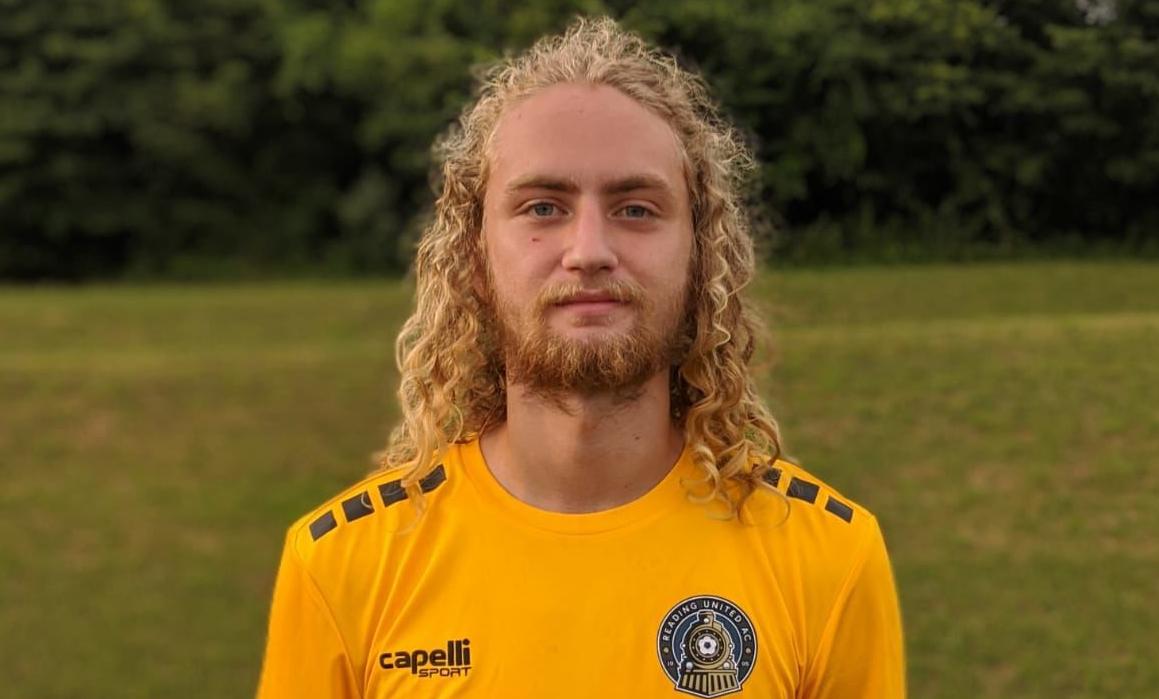 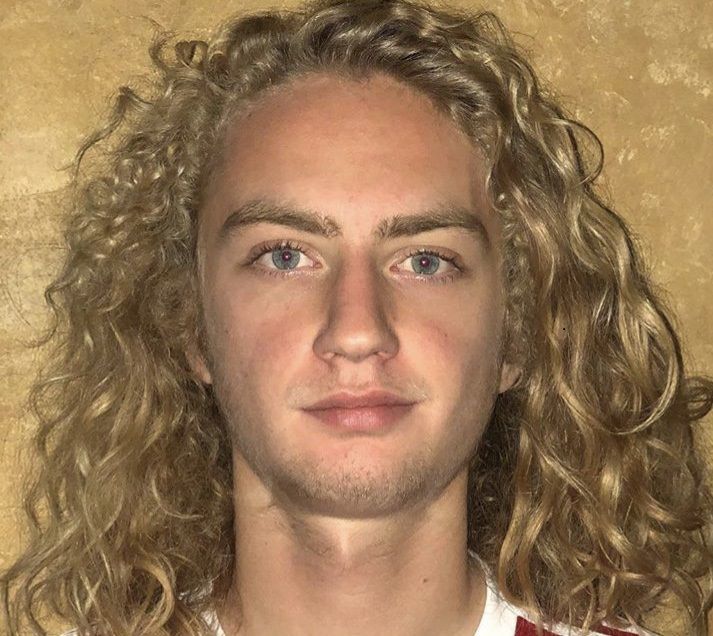