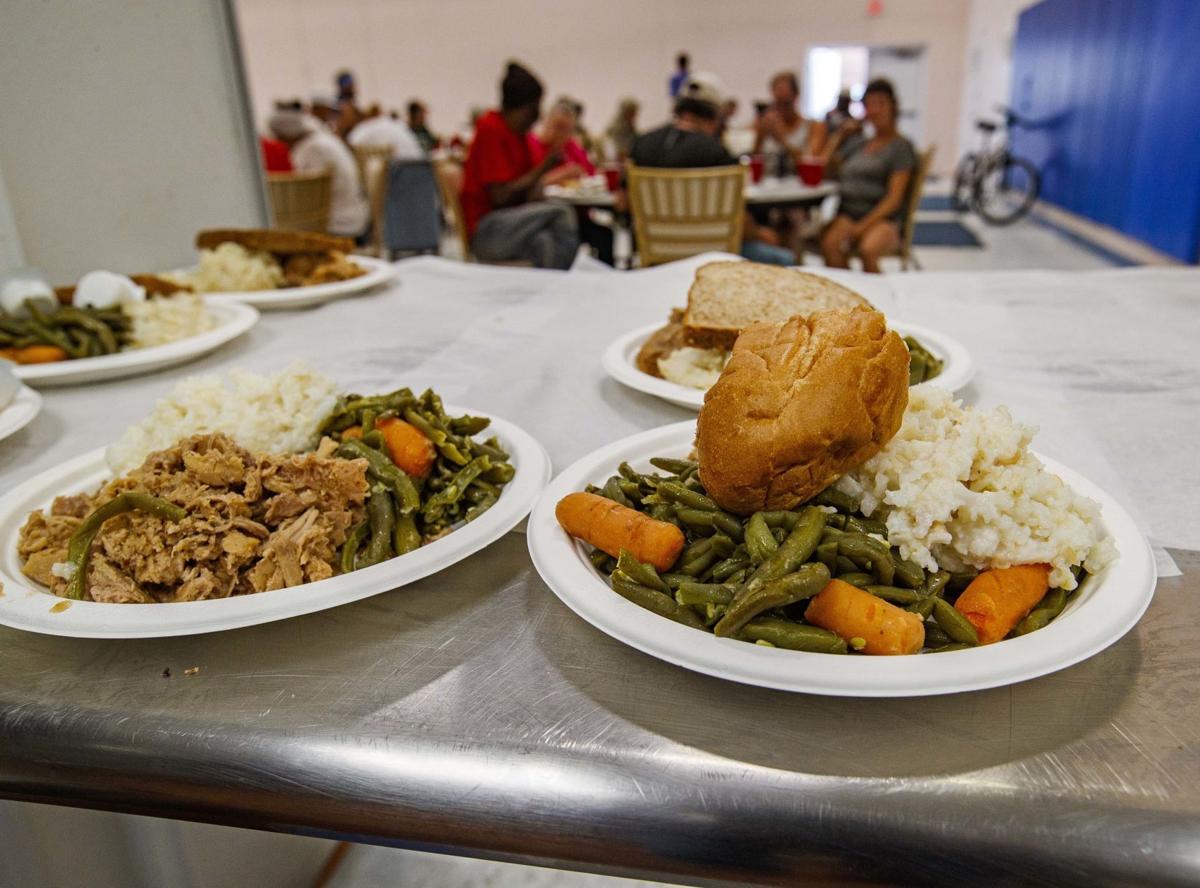 Captain Frank Picciotto, the commanding officer for Salvation Army’s Atlantic City Corps, said the Texas Avenue location has seen a 20% increase in people coming for a meal since Sister Jean’s Kitchen closed in February due to safety issues. 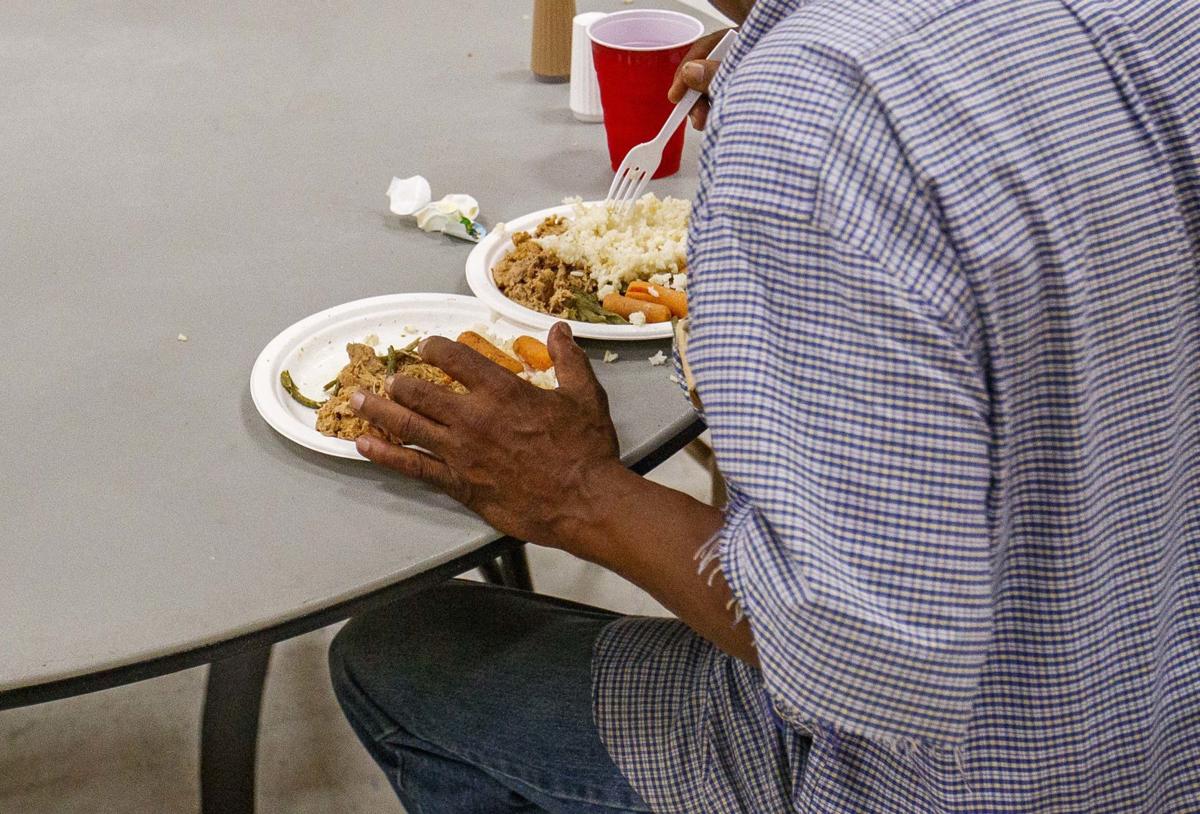 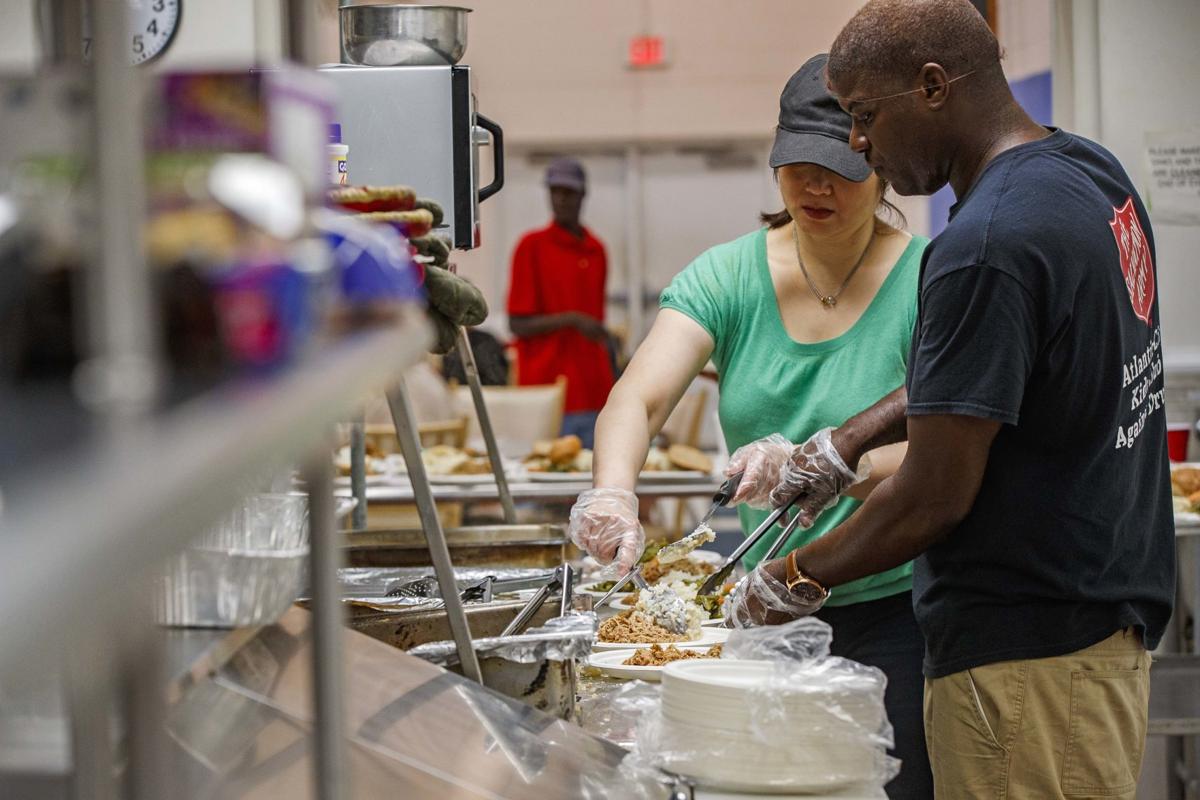 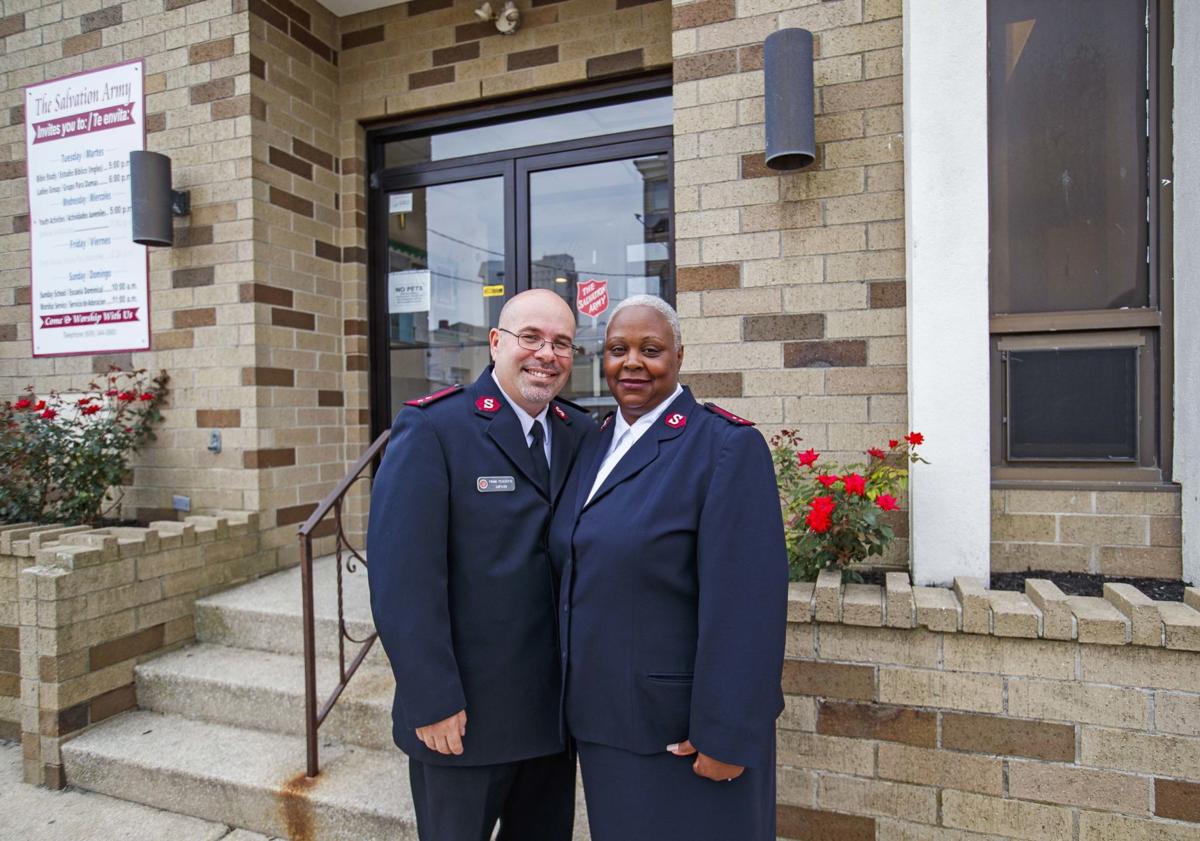 Salvation Army Captains Frank and Shana Picciotto oversee the soup kitchen, which has taken on more clients since the closing of Sister Jean’s Kitchen earlier this year. 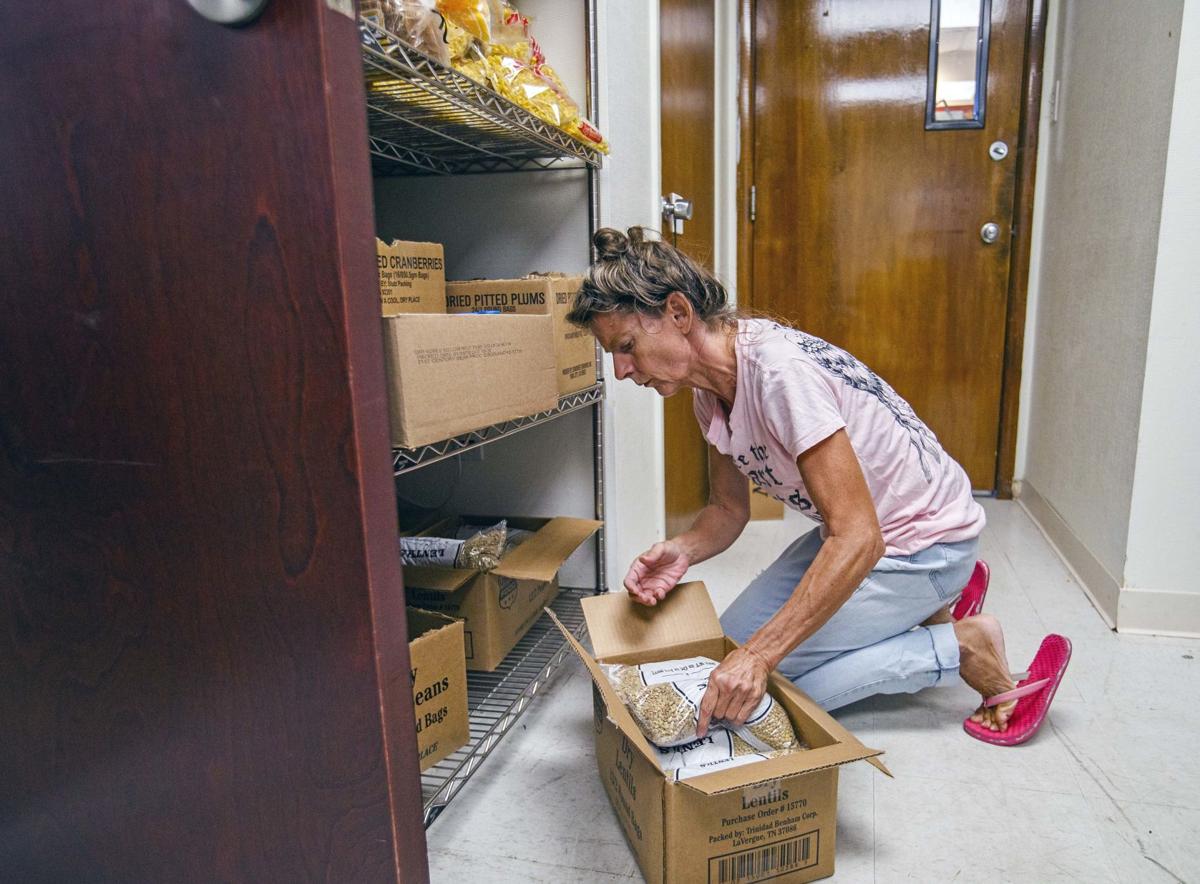 Volunteer Rhonda Charles, of Ventnor, organizes the pantry room at the Salvation Army on Texas Avenue in Atlantic City. 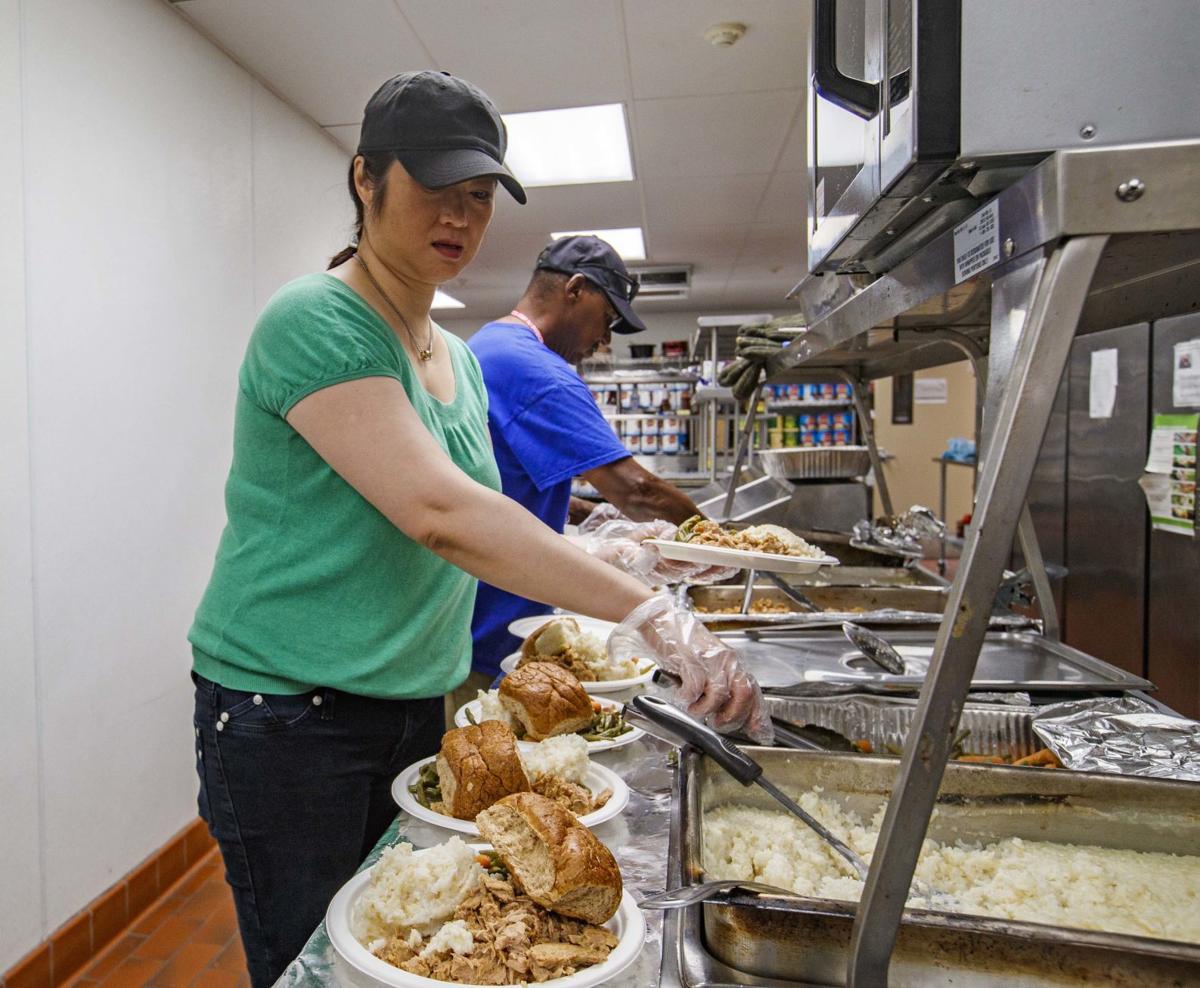 ATLANTIC CITY — On a Thursday in August, sitting in the gym at the back of the Salvation Army on Texas Avenue, Jeff Litton ate a heaping plate of chicken, rice, green beans, carrots and a roll.

The 60-year-old, who sleeps most nights on the beach or the Boardwalk, started eating lunch there when Sister Jean’s Kitchen closed last winter.

“They treated us great, just like they do here,” Litton said.

Litton is one of dozens of people who began frequenting other soup kitchens in the city after Sister Jean’s closed. Leaders at the Salvation Army and the Atlantic City Rescue Mission, situated on Bacharach Boulevard beside the Convention Center, said they’ve seen an increase in the number of people lining up for meals.

In a city with a 40% poverty rate, they may need to sustain that population into the future. The Rev. John Scotland, head of the Friends of Jean Webster, said there are no plans at the moment to reopen.

Some 1,500 people use soup kitchens in Atlantic City every month, said Kimberly Arroyo, director of agency relations and programming at the Community FoodBank of New Jersey, which provides food to soup kitchens and pantries in the city. Sister Jean’s was the largest hot meal provider in the city, she said.

“That was a huge hit to the community,” Arroyo said.

But others were there waiting to fill the need. Captain Frank Picciotto, the commanding officer for Salvation Army’s Atlantic City Corps, said the Texas Avenue location has seen a 20% increase in people coming for a meal. They’ve handled it well so far, he said, but would welcome the assistance that would come with Sister Jean’s reopening in another part of the city.

“I think us working together is meeting the need,” Picciotto said. “We’re praying that (Sister Jean’s) come back and help out the people who are hungry in this city.”

Despite the help from organizations inside and outside the resort, including the Community FoodBank, ShopRite and Acme, the Salvation Army’s Texas Avenue location is running a deficit, Picciotto said. It won’t stop them from carrying out their mission, he said. The location offers a food pantry, laundry, church services, summer day camp and more, in addition to weekday lunch.

“Financially, we’re struggling,” Picciotto said. “We’re not really getting that much money from the city or people. ... God is keeping us open.”

Sister Jean’s Kitchen on Pacific Avenue shut down in February after plans to move into St. Monica’s Catholic Church on Pennsylvania Avenue were dashed when the organization was told the building was unsafe.

Litton, a regular there, saw it as an effort to move services for the indigent out of the Tourism District. The Pacific Avenue location sat across from Hard Rock Hotel & Casino Atlantic City.

“They didn’t want us bums in front of Hard Rock,” Litton said. “There’s no doubt in my mind.”

Since then, Scotland’s chef at Sister Jean’s, who has also worked as a chef at Harrah’s Resort for more than 30 years, told him regulars have come up to him wondering when they will reopen. He’s seen regulars eating out of trash cans, he said.

“I’m certain there’s still a hunger problem in Atlantic City,” Scotland said. “Look at the unemployment figures for Atlantic City. They’ve been double digits ever since the casinos began, and even before then.”

At least for the foreseeable future, the Rescue Mission and the Salvation Army will need to make do with the new normal.

The Rescue Mission is up to the challenge, said Pastor Bill Warner, vice president of biblical education and policies/procedures. The mission serves several hundred people a day for breakfast, lunch and dinner, Warner said, including 60-70 people who came from Sister Jean’s.

“We’re a larger facility, so really, to take the amount of people, even if it was all of them — even if nobody even came to Salvation Army — we would be able to handle that overflow,” Warner said.

Warner said the Rescue Mission would accept any of the volunteers from Sister Jean’s who want to continue feeding the hungry. He pointed to their Thanksgiving and Christmas meals as proof they can handle the overflow — they serve more than 1,000 people during their annual holiday meals, Warner said.

His staff and volunteers “might have a little bit more to do,” Warner said, “but there hasn’t been any kind of stress like, ‘Oh my gosh, how are we gonna get all these people fed?’ That’s not even a problem. That’s just everyday things that we’re used to doing.”

Get on the bus

ATLANTIC CITY — Marla Scheffler munched on a piece of arugula on a recent Friday, enjoying the product of her care and patience: a vibrant veg…

EGG HARBOR TOWNSHIP — It’s a good start to the week at the Community FoodBank of New Jersey when a 16-wheel tractor trailer shows up.

ATLANTIC CITY — “These are guests in our house,” Jon Rosky said Saturday morning inside the Boys and Girls Club of Atlantic City. “These are f…

Atlantic City is getting a supermarket. Can the resort keep it?

ATLANTIC CITY — Sylvester Showell sometimes has to make three stops to get all of the groceries he needs.

New Jersey is the Garden State. But in Atlantic City, it’s a food desert

Captain Frank Picciotto, the commanding officer for Salvation Army’s Atlantic City Corps, said the Texas Avenue location has seen a 20% increase in people coming for a meal since Sister Jean’s Kitchen closed in February due to safety issues.

Salvation Army Captains Frank and Shana Picciotto oversee the soup kitchen, which has taken on more clients since the closing of Sister Jean’s Kitchen earlier this year.

Volunteer Rhonda Charles, of Ventnor, organizes the pantry room at the Salvation Army on Texas Avenue in Atlantic City.