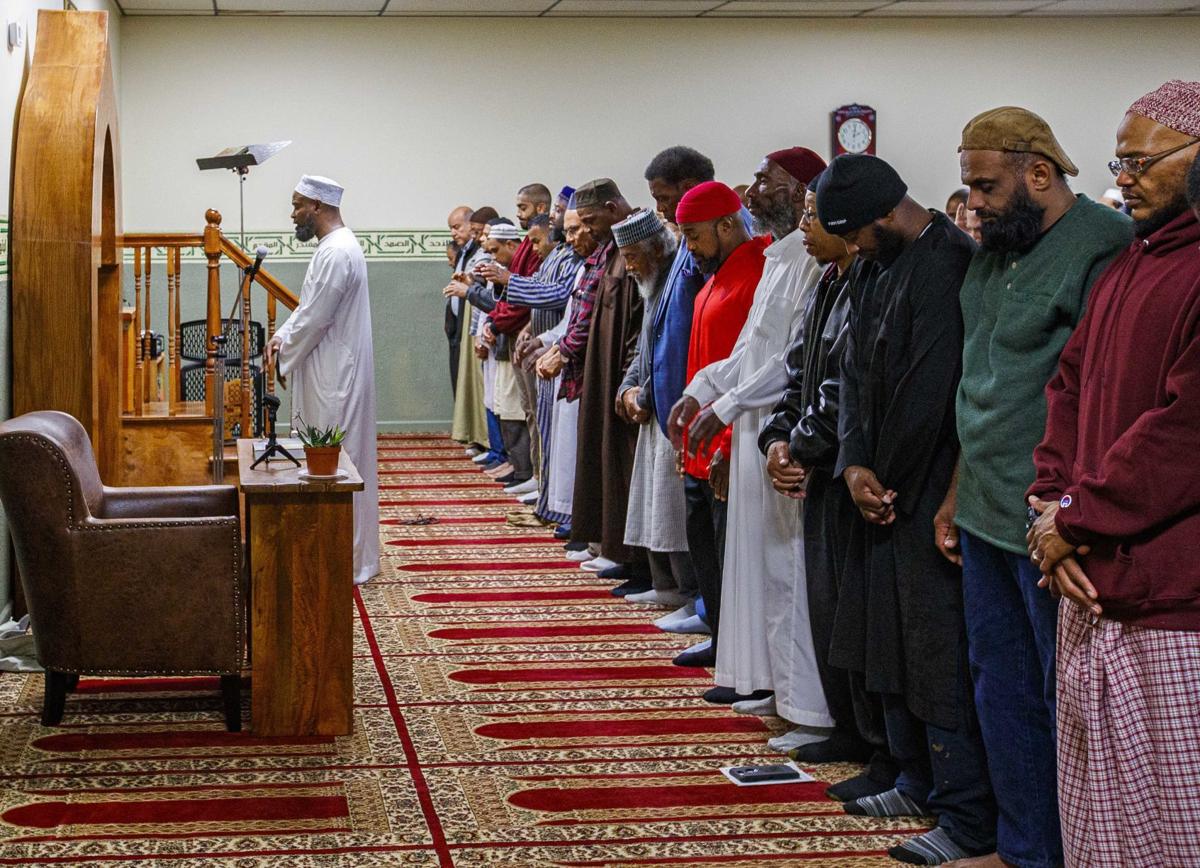 Imam Amin Muhammad at Masjid Muhammad during Muslim Jumah prayer, which takes place from 1:15 to 2 p.m. on Fridays. 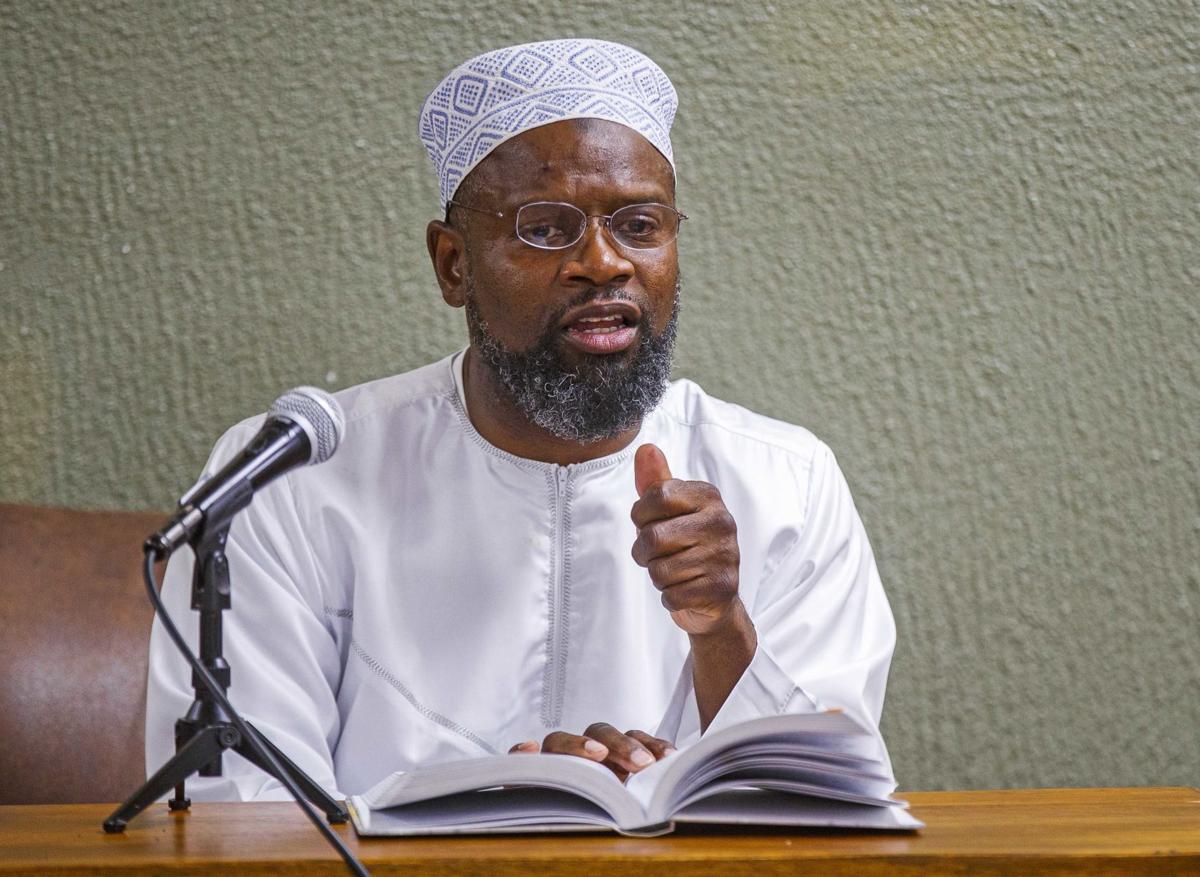 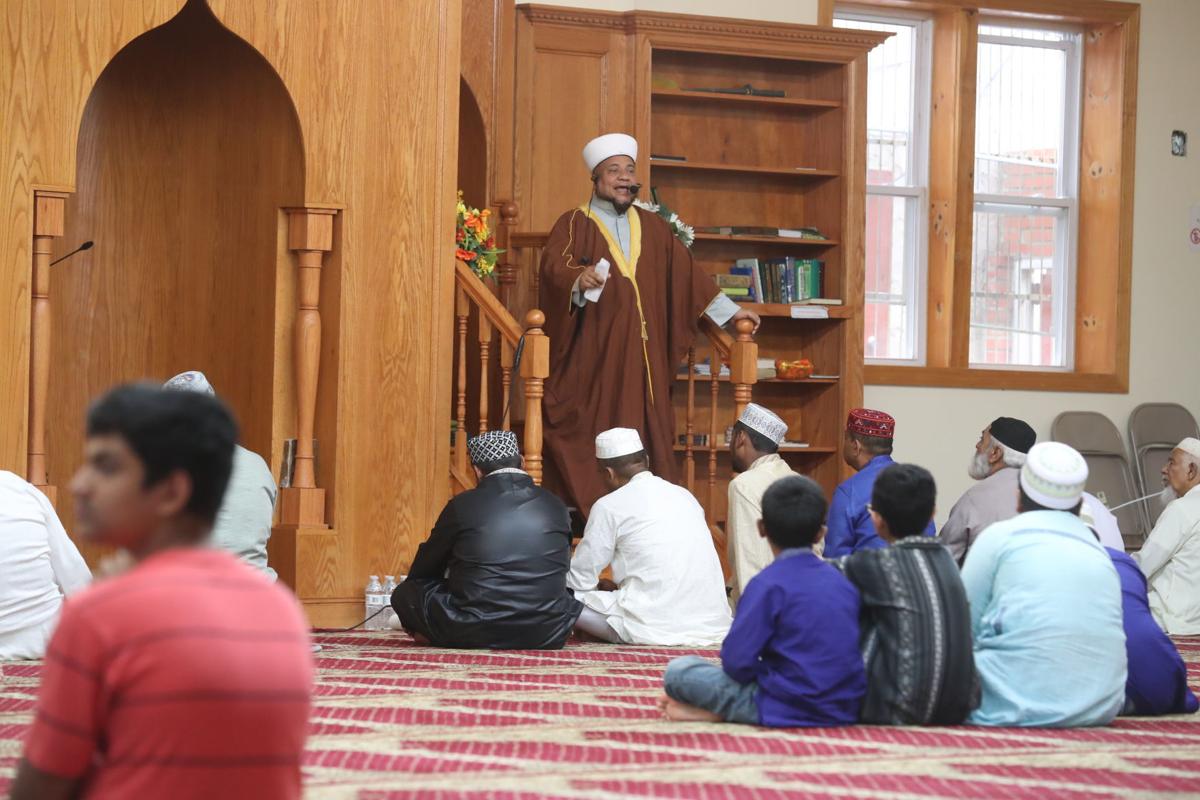 Dr. Mohammed Ruhul Amin speaks during a service in August. 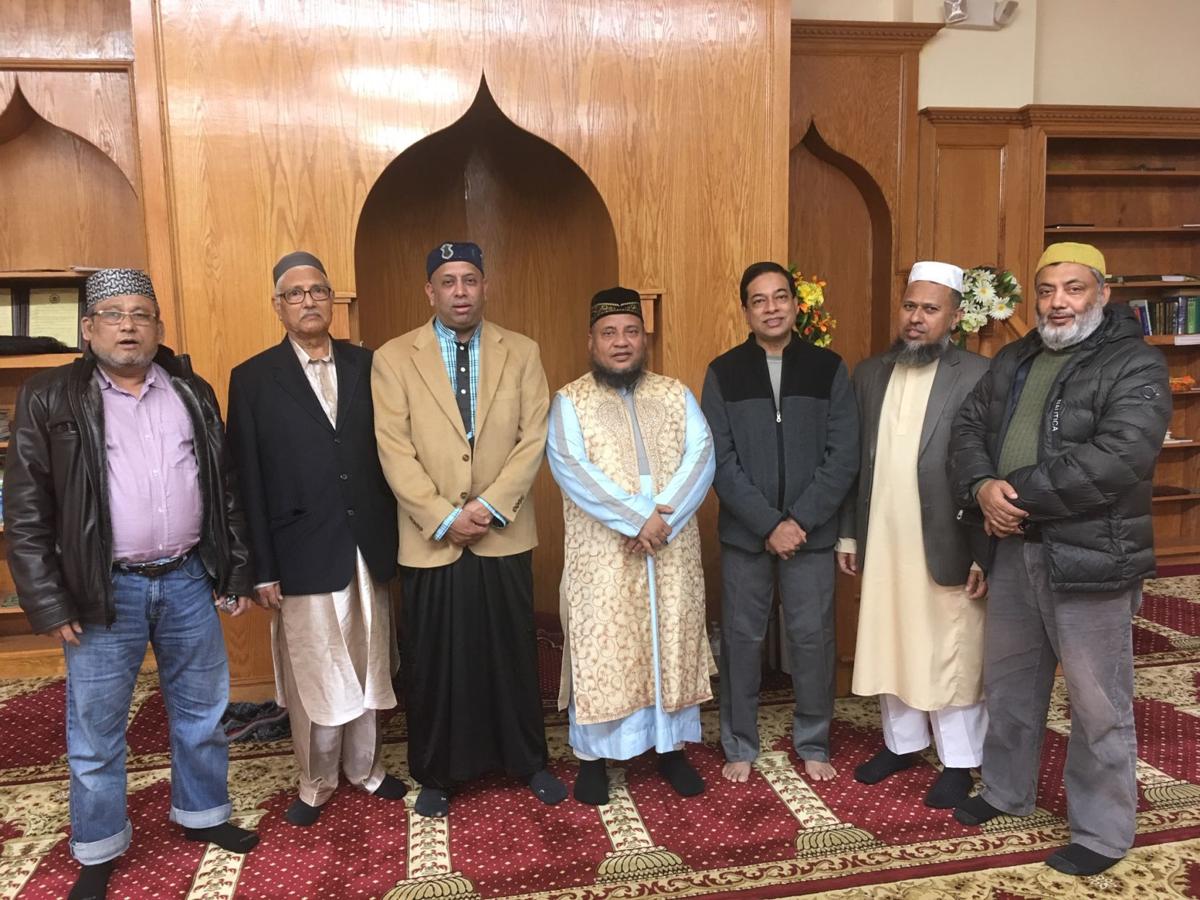 ATLANTIC CITY — Diane Abdur-Raheem converted to Islam in 1975 when she lived in Los Angeles. She returned in 1979 to her hometown here, where she has lived ever since.

Abdur-Raheem recalls receiving the most criticism for being Muslim in the resort after the Sept. 11, 2001, terrorist attacks perpetrated by the Islamic extremist group Al-Qaeda.

“It didn’t make that much of a difference until things happened, like Sept. 11, of course, how people started to look at me because I was always garbed. I always had my Muslim garb on, but I never let that bother me. I’m basically a strong-willed person, so looks and attitudes and things of that nature is not something that I will allow myself to worry about,” Abdur-Raheem said.

Since the 2016 presidential campaign and election of Donald Trump, Abdur-Raheem and other Muslims in the city say they have been able to live and worship without the fear and intimidation that exist in other parts of the country.

By comparison, someone threw a pig’s head at the Al-Aqsa Islamic Society in 2015 in Philadelphia.

A couple of women wearing head scarves, or hijabs, were attacked in 2016 in New York City.

After crimes against Jewish people, crimes against Muslims were the second highest percentage of religious bias offenses nationally, FBI statistics from 2017 show.

Atlantic City Police Department spokesman Sgt. Kevin Fair said he is not aware of any hate crimes against Muslims during his 16 years on the police force.

Councilman Kaleem Shabazz, who is Muslim, said as far as he knows, the city has been remarkably free of anti-Islamic incidents.

“The Atlantic City Police Department will treat the mosque just like they treat the church and the synagogue,” said Shabazz, who added a dialogue was started between law enforcement and the Islamic community at least three years ago. “We have been very fortunate in Atlantic City.”

The city was one of the first places in the area to have a mosque, said Ralph Hunter, co-founder of the African-American Heritage Museum of Southern New Jersey. The mosque was called Atlantic City Muslim Temple No. 10.

During a City Council meeting Friday, an ordinance was introduced that would rename one of the corners of Massachusetts and Melrose avenues Imam W. Deen Mohammed Corner to acknowledge the resort’s historical ties to Islam, Shabazz said.

There are three mosques in the city. A fourth one, Masjid Al-Furqaan, in the 1200 block of Atlantic Avenue, was damaged in a fire in 2016.

The oldest mosque still existing in the resort is Masjid Muhammad of Atlantic City on North Albany Avenue, which has mostly African-American members with some Egyptians and Pakistanis, Shabazz said.

A Muslim should acquire knowledge, practice the religion, be sincere, be scrupulous and fear Allah, or God.

Masjid Al-Taqwa, in the 3500 block of Atlantic Avenue, is attended by many Egyptians, Pakistanis and some African Americans, Shabazz said.

Masjid Al-Hera, in the 2400 block of Atlantic, has 80% attendance by people from Bangladesh, 10% from India and Pakistan and 10% from other countries, said Imam Dr. Muhammad.

“There is a misunderstanding or a misconception about Muslims,” said Amin, who lives in the resort. “Some people in the name of Islam are doing bad things. ... Real Islam is to spread peace, tolerance and tranquility.”

Prior to coming to the city, Amin was with the Islamic Society of Greater Houston, which caters to a population of 2.3 million people.

The small-town feeling of the resort, population 37,804, suits Amin. He is the founding imam of Masjid Al-Hera, which was established in 2011. Former Mayors Lorenzo T. Langford and Frank Gilliam Jr., current Mayor Marty Small Sr. and U.S. Rep. Jeff Van Drew, D-2nd, have all been to his mosque, Amin said.

“The Muslims of South Jersey are so polite, humble and help each other,” said Amin. “I love them, and they love me.”

Some of the leaders of Masjid Al-Hera in Atlantic City

Imam Amin Muhammad at Masjid Muhammad during Muslim Jumah prayer, which takes place from 1:15 to 2 p.m. on Fridays.

Dr. Mohammed Ruhul Amin speaks during a service in August. 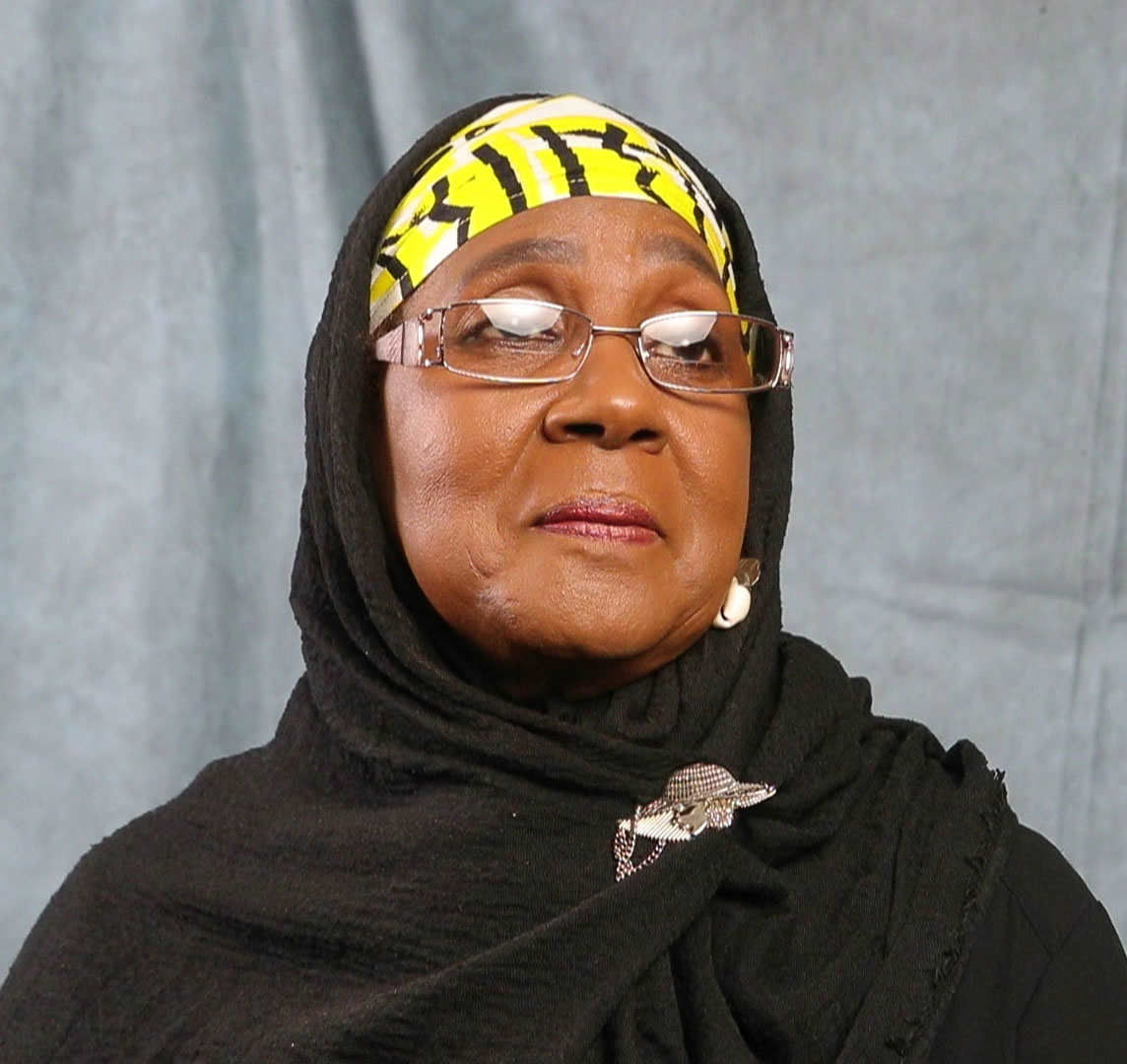