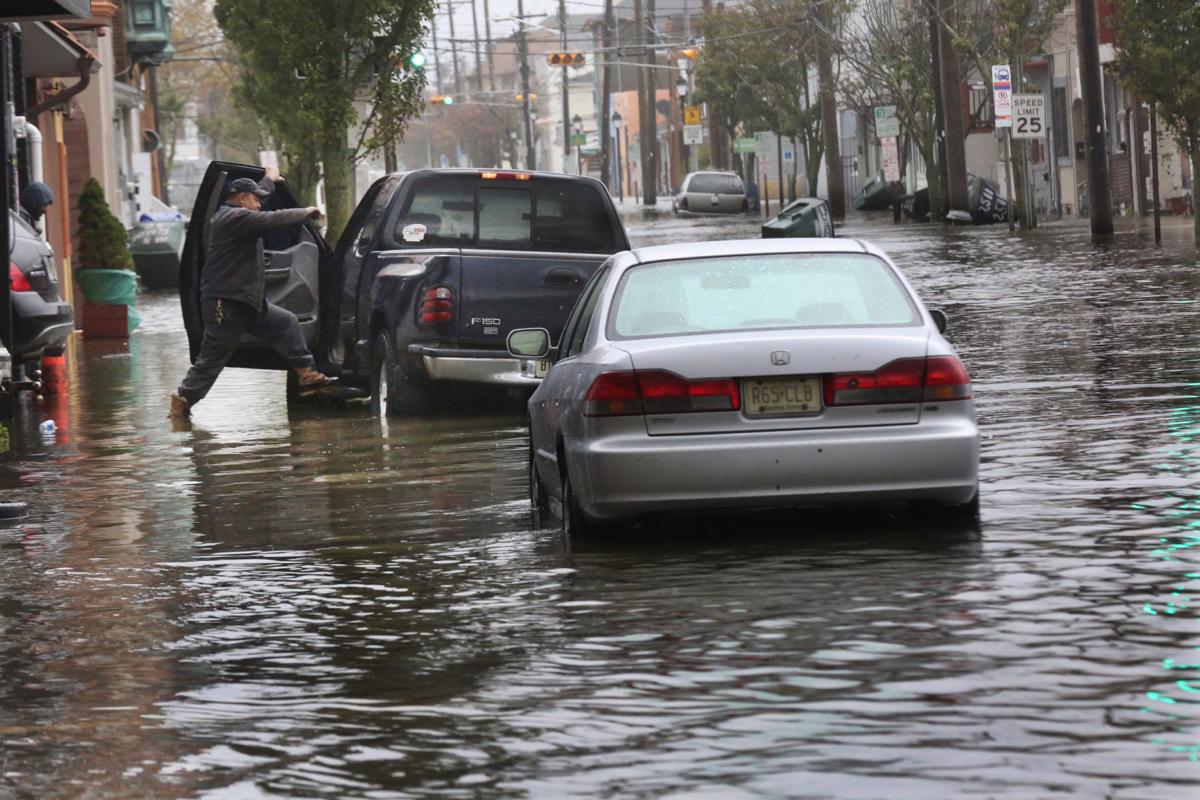 Staying dry while getting in your vehicle was a challenge on flooded Fairmount Avenue in Atlantic City, where the high water went on for several blocks for several hours, during an October 2018 nor'easter. 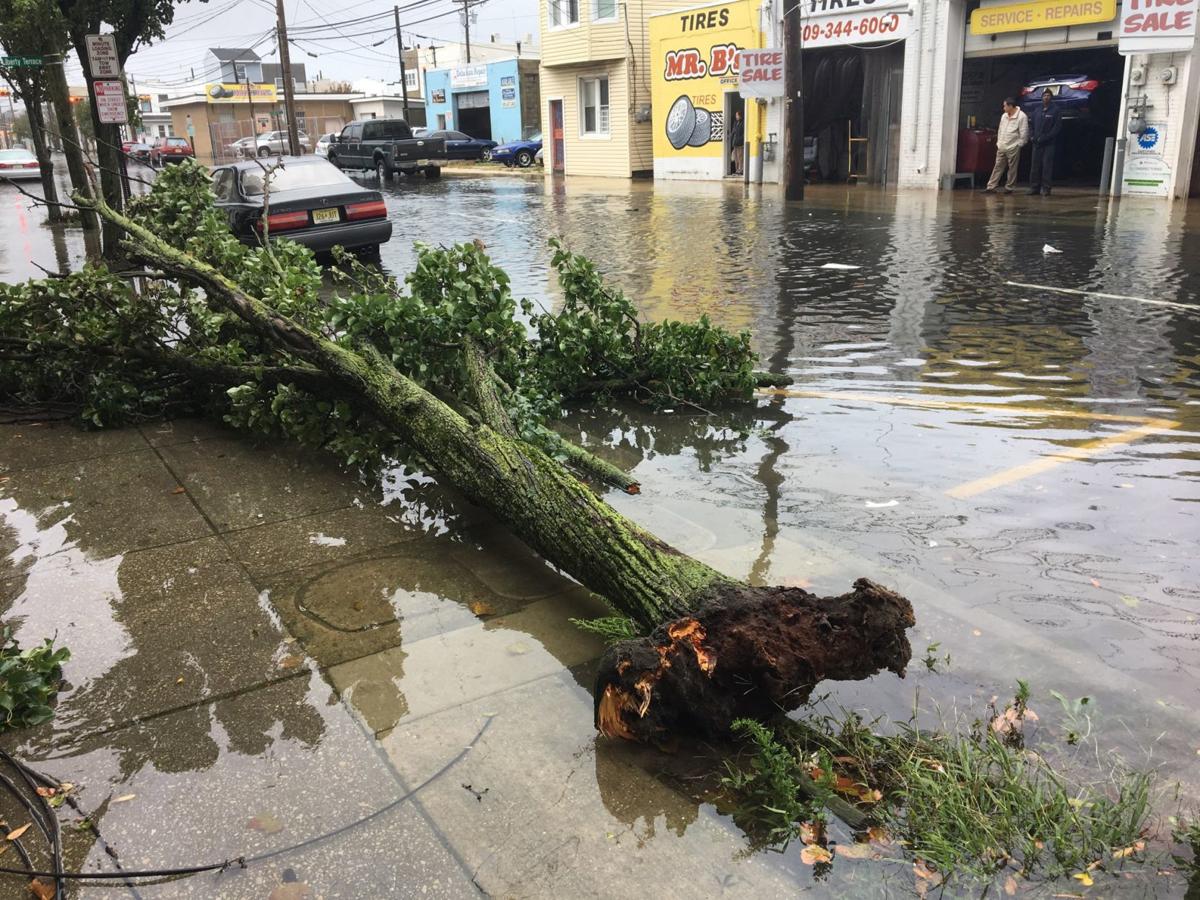 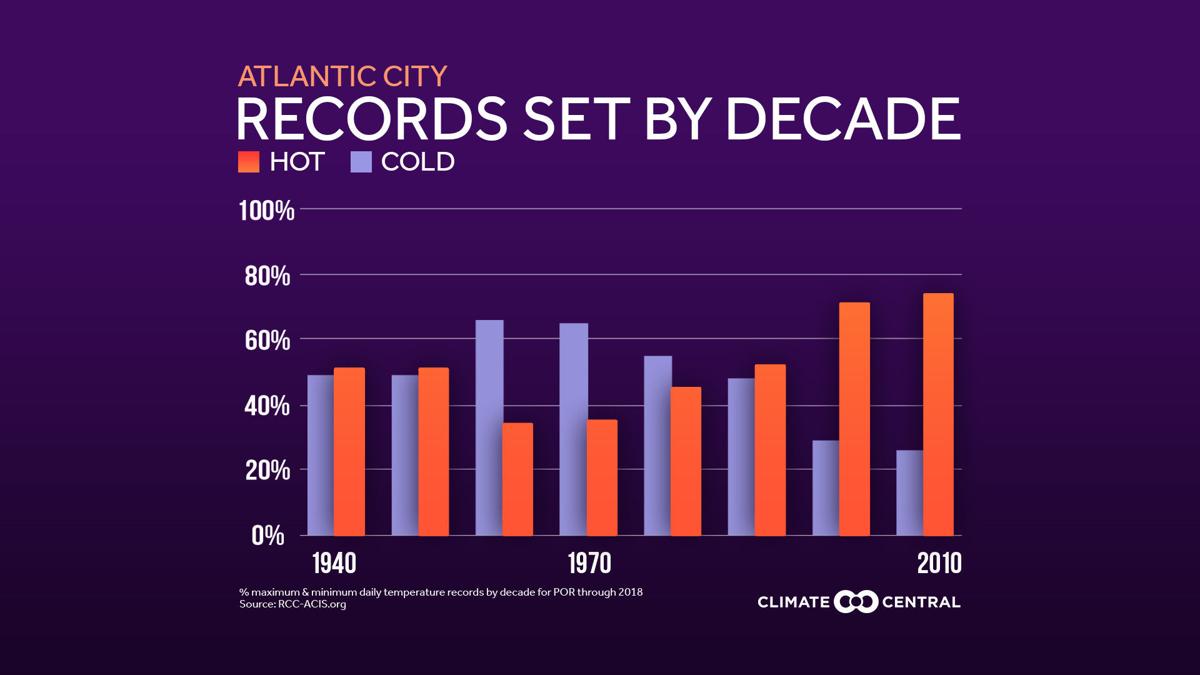 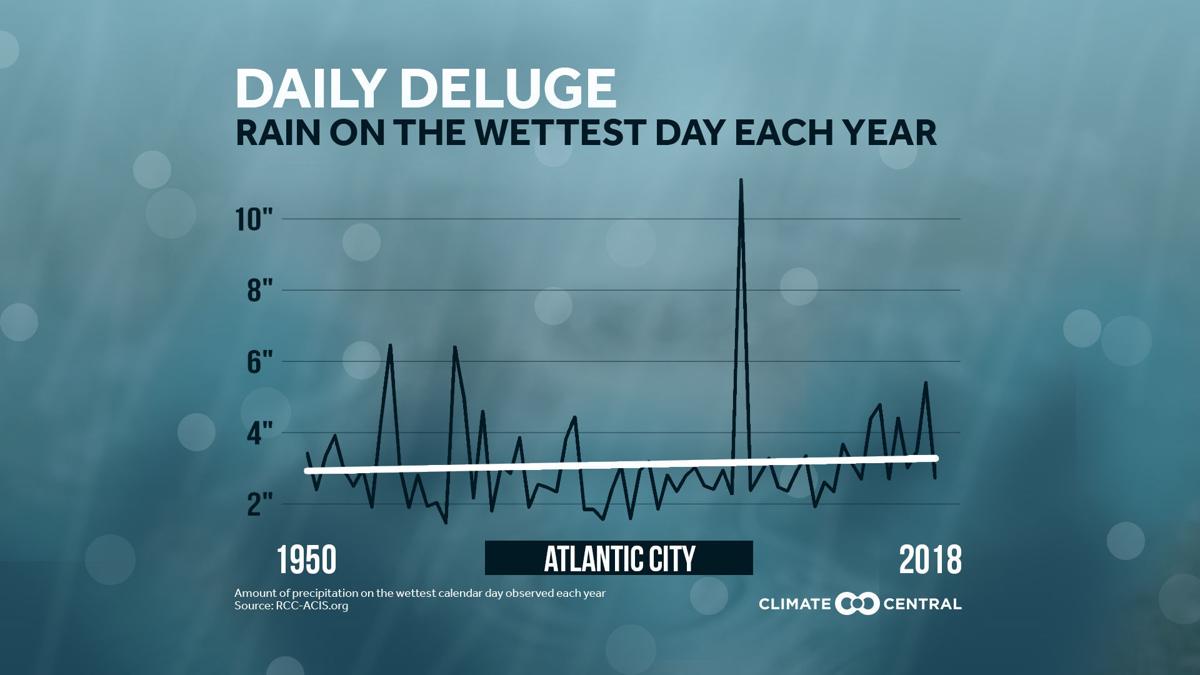 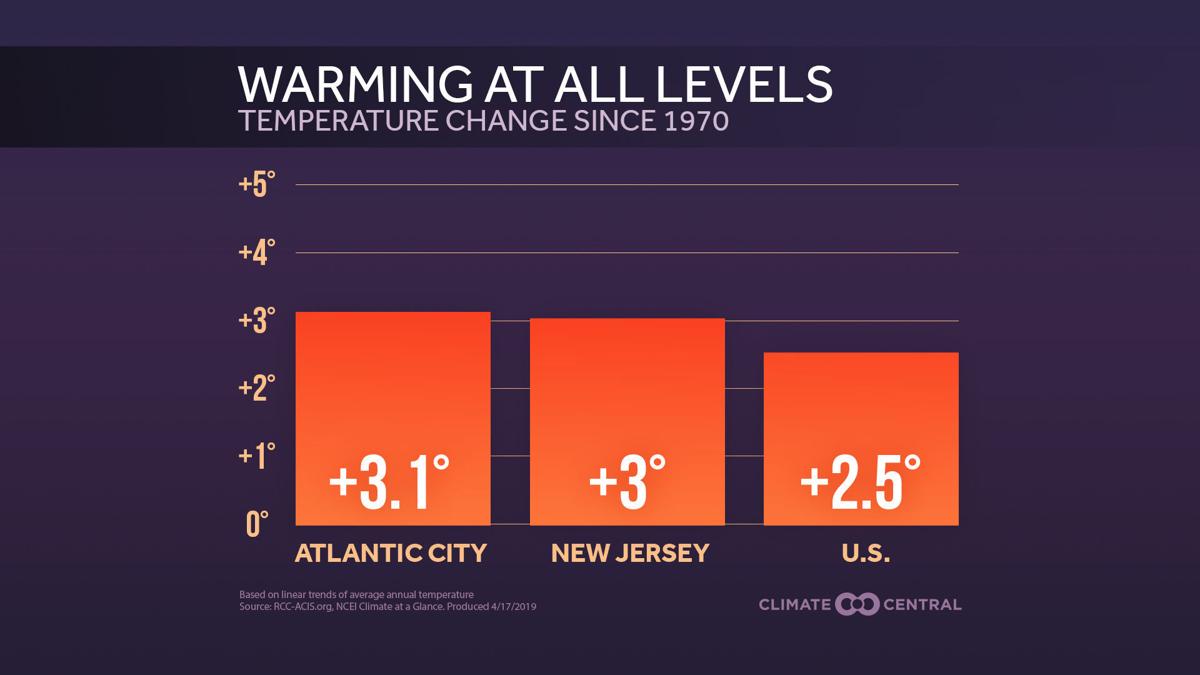 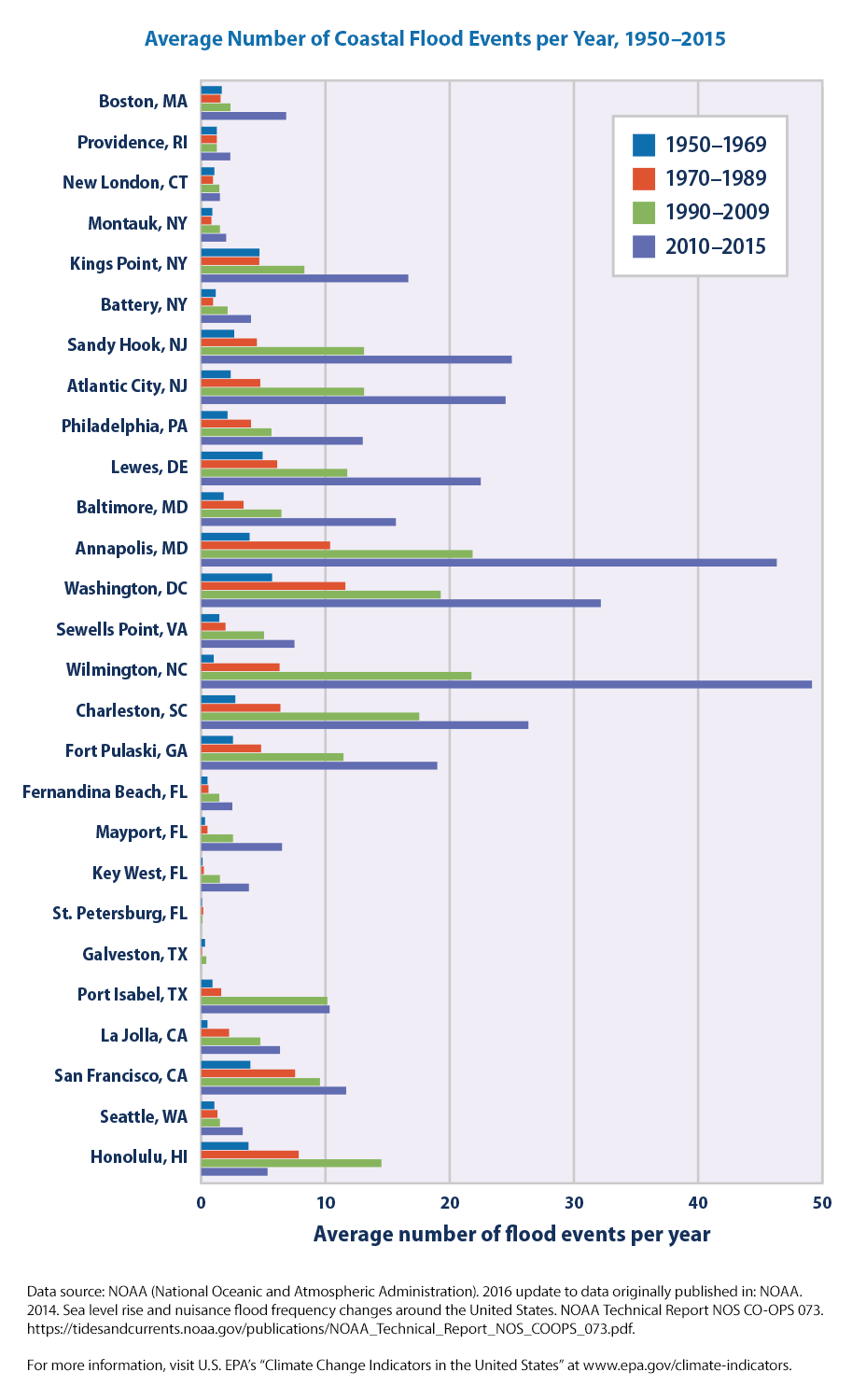 Atlantic City has seen roughly eight times as many coastal flooding event in 2010-2015 as compared to 1950-1969. That is among one of the highest increases in the United States.

Staying dry while getting in your vehicle was a challenge on flooded Fairmount Avenue in Atlantic City, where the high water went on for several blocks for several hours, during an October 2018 nor'easter.

Atlantic City has seen roughly eight times as many coastal flooding event in 2010-2015 as compared to 1950-1969. That is among one of the highest increases in the United States.

Atlantic City ranks near the top for New Jersey places most impacted by climate change.

A warmer Earth, higher water levels and a lack of financial resources by the city and many of its residents all leave the city increasingly vulnerable.

But the sea level threat along the coast is particularly alarming in Atlantic City, where levels have increased more than 14 inches over the past century, Robinson said. Flooding events that used to just reach the sidewalk now bring water into the ground floor of an unraised home.

“If an area floods, that really detracts from the value, not to mention the quality of life,” said Elizabeth Terenik, senior project manager for the Atlantic City Development Corp. and the city’s planning and development director from 2014 to 2017.

Atlantic City has seen about eight times more coastal flooding events per year between 2010 and 2015 than in the period between 1950 and 1969, according to the U.S. Environmental Protection Agency.

That translates from about three coastal flooding events a year to about 24, one of the highest rate increases of any U.S. city, according to the EPA.

Flooding has become so pervasive here that in 2012, the National Weather Service raised the threshold that would prompt a coastal flood advisory, from 6 feet to 6.3 feet, partly due to concerns the warnings were becoming too routine for residents.

Flooding cripples part of Route 40. The plan to fix it will cost $27.5M

If a full moon and rain are in the forecast, you can bet the route many take into and out of…

Climate Central reports that, within 30 years, 33% of homes in Atlantic City could be inundated with water in a given year.

“Given that Atlantic City is surrounded by water, with numerous structures and roadways very close to sea level, it is certainly one of the more vulnerable areas to flooding,” Robinson said.

The effects are unlikely to be reversed in the near future.

But how does a city without resources adapt?

The Baltic Avenue Canal has been one solution. After 50 years of being damaged, the flood mitigation solution came back to life in 2018. Receiving about $13 million in state and federal grant money, it can store flood water and pump it out after coastal flooding has subsided. 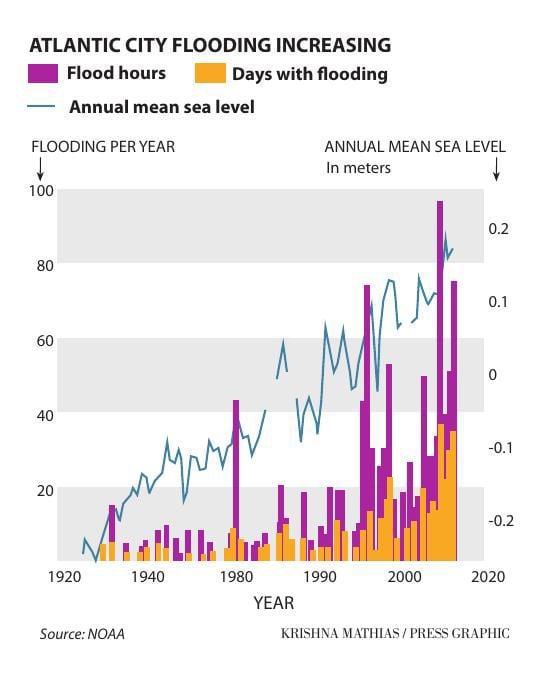 “That covers about 800 acres, which is about two-thirds of the city,” Terenik said.

While there were many challenges in the city during her time as planning and development director, Terenik reflected on little moments for little cost that helped residents.

“Coordinating with public works to clean out a drain … things like that are rewarding because you impact the quality of life. At the same time, I realize there’s so much more to do,” she said.

But fixing some of those issues will be costly and require help from federal and state agencies. The New Jersey Department of Transportation plans to raise portions of the Black Horse Pike to the tune of $27.5 million, most of it federally funded. Part of that will raise the ramp of the coastal evacuation route that turns onto West End Avenue in the city by up to 2.5 feet. The project is three years away from starting.

“You look at the nuisance flooding events. ... Some people want to move but have no money for it. If you’re going to talk climate change, you’re going to have to be honest about it. Our return so far on what we’ve spent hasn’t been anything,” said Eberwine of the city.

Eberwine recalled a trip he took with the National Guard after Superstorm Sandy to Long Beach Island. A trailer park at the south end of the island was “totally destroyed” by the water and wind, only to be replaced by three-story homes, better protected against flooding.

“If you take just one year of the climate research money, you’re talking about billions of dollars ($11.6 billion in 2014, according to the United States Government Accountability Office),” said Eberwine. “What could you do with that money? How about persons who cannot afford to relocate; give them a choice to move away from the coast or build higher as well.”

Seasonable to chilly weekend temperatures, as we 'fall back' at night

A seasonable Saturday will give way to a chilly Sunday just in time to turn back the clocks Saturday night.

Weather as quiet as quiet can be for the next week

After two weeks dealing with two 1-inch-plus rain events, multiple rounds of coastal flooding and occasions of gusts over 50 mph, it will be a…

Dry Monday, few showers Tuesday and a wintry weekend ahead

Election Day will bring a few showers, but overall, not a washout in the region. A pair of tranquil days will then give way to a rainy event, …

High pressure will dominate Wednesday and Thursday. Then, a potent cold front will move in Thursday night, bringing wet, not white, weather. T…

Dry day, a wet night and two rounds of arctic air ahead

Thursday will continue with the spot-on November weather, at least for part of the day. Then, a potent cold front will sweep through, bring ra…

Weather fluctuates between fall and winter into next week

A roller coaster ride of temperatures over the next seven days will have it feeling like winter to fall then back to winter again.

Veterans Day is the warmest of the week, as record cold to follow

Southwest wind will pump up temperatures to the warmest level of the new week, before a cold front slices through the mild weather. Record col…

Fall slips into winter as rain changes to snow Tuesday

While it’ll be more wet than white, the potential for the fourth earliest measurable snowfall on record is likely Tuesday.

After first snow of the season, record cold for next two days

After recording our first snow of the year, we’ll pass another check mark on our way to winter with mid-30s for a high and two to three temper…

After a Wednesday that saw the morning record low broken, Thursday morning may start the same way. But southerly winds will push us up from re…

The region will be squeezed between an arctic high pressure system to the north and a coastal storm starting Saturday and lasting to Monday.

After seeing two rounds of coastal flooding Sunday, the Monday midday high tide will be the most severe of this pattern we’re in. A few shower…

With coastal flooding over, quiet weather controls the week's weather

After multiple rounds of coastal flooding Sunday and Monday, the forecast will calm down, with southern high pressure bringing back sunshine a…

While two rounds of rain is expected this weekend, no washouts are expected as the busy travel week gets underway.

Another round of weekend rain; Thanksgiving week mostly dry

Saturday will be dry, though rain will arrive in the evening and last overnight and into part of Sunday. Turning toward the holiday week, Wedn…

Looking at the forecast over the next week, Sunday will be the only real blip. Otherwise, you can feast on sunshine and seasonable to mild wea…

We’ll go from warm to wintry for the rest of the week.

Strong winds to whip Thanksgiving, but not as frigid as last year

Thanksgiving Day will bring the strong winds of last year’s version, if not even stronger. However, we will not have to contend with the bitte…

While Black Friday historically denotes when stores make a profit for the year, South Jersey shop owners and shoppers will also profit from pl…

While Thursday will bring a spectacle to South Jersey, the day’s weather will be dry and benign. More noteworthy weather will come for part of…

Atlantic City gets $4M to replace bulkheads in Chelsea

ATLANTIC CITY — Bulkheads in Lower Chelsea will be replaced after the city received more than $4 million in grant funding.

Elizabeth Terenik, a former city planner in Atlantic City and current project manager for ACDevco, was appointed last month to the New Jersey …