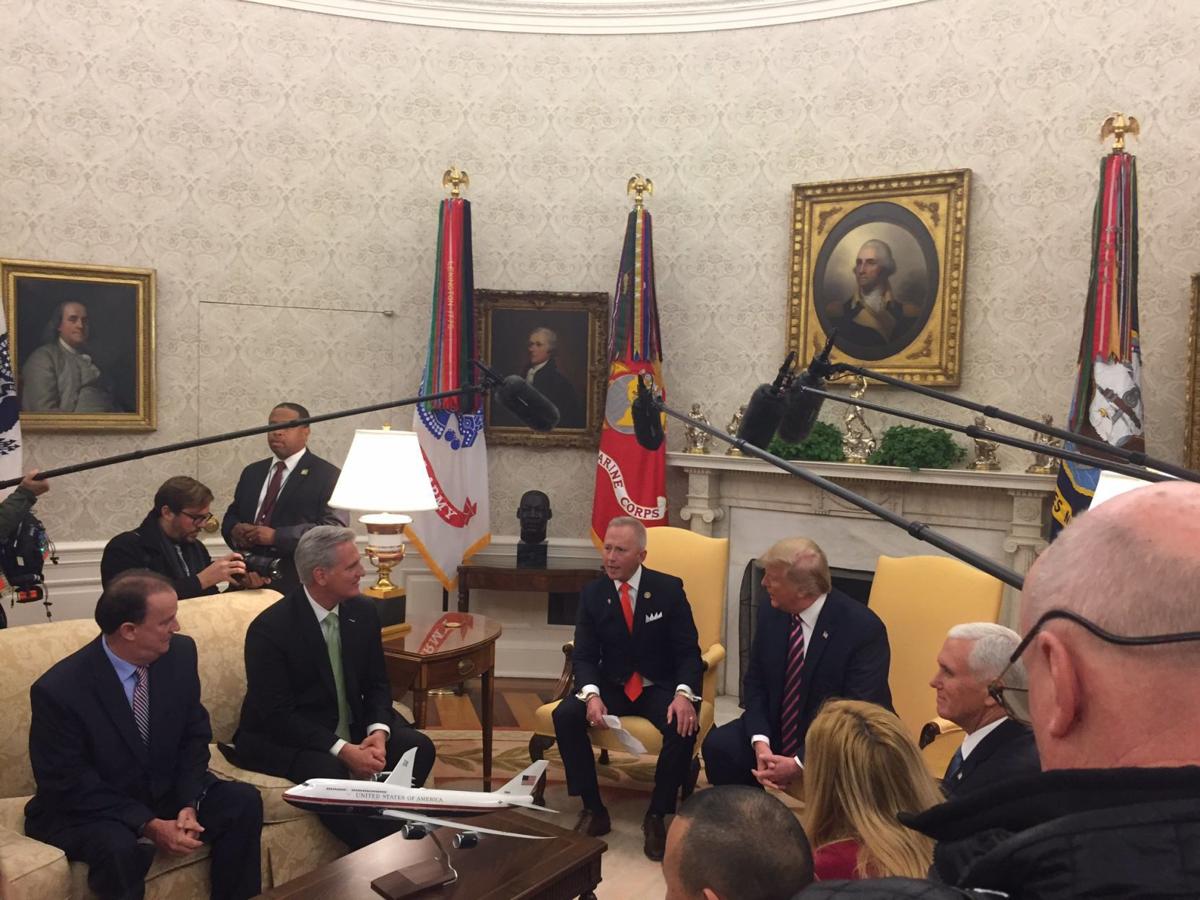 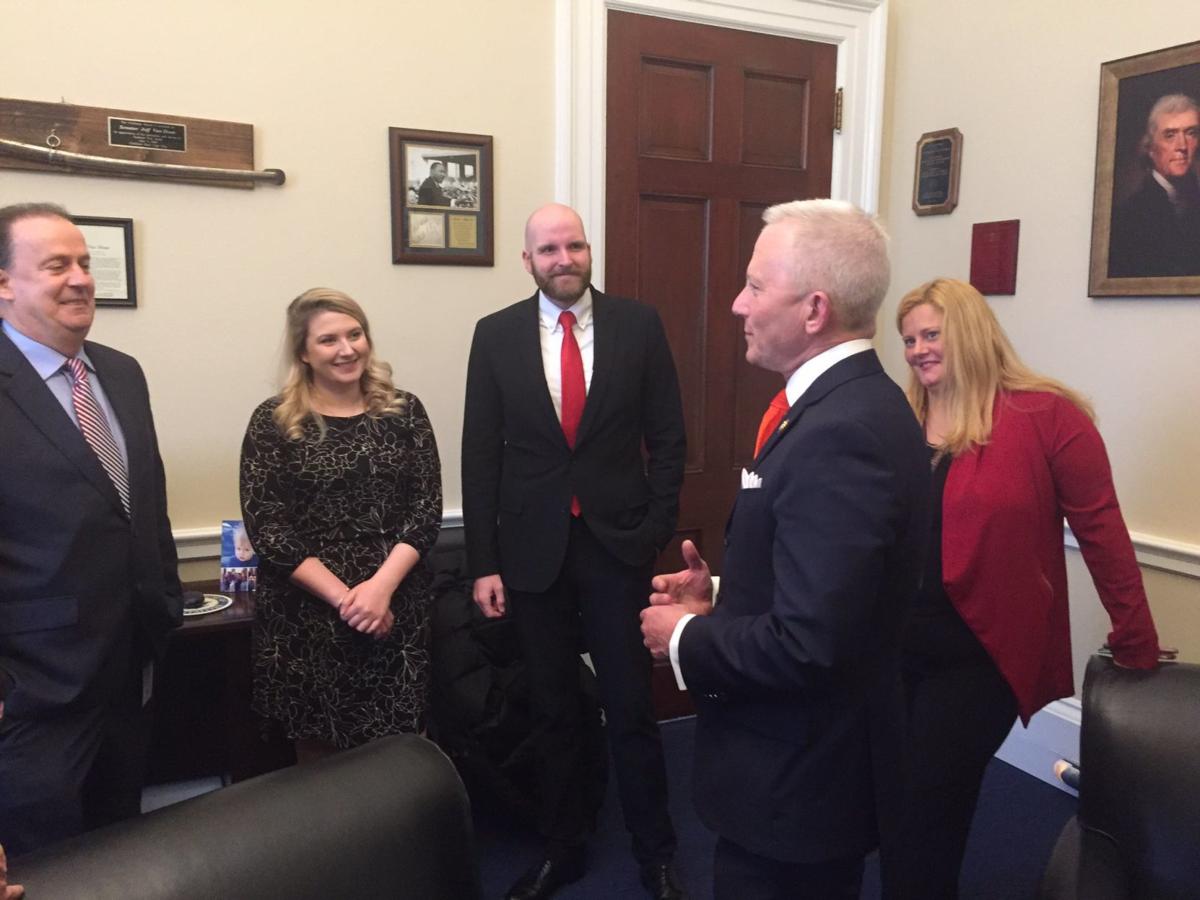 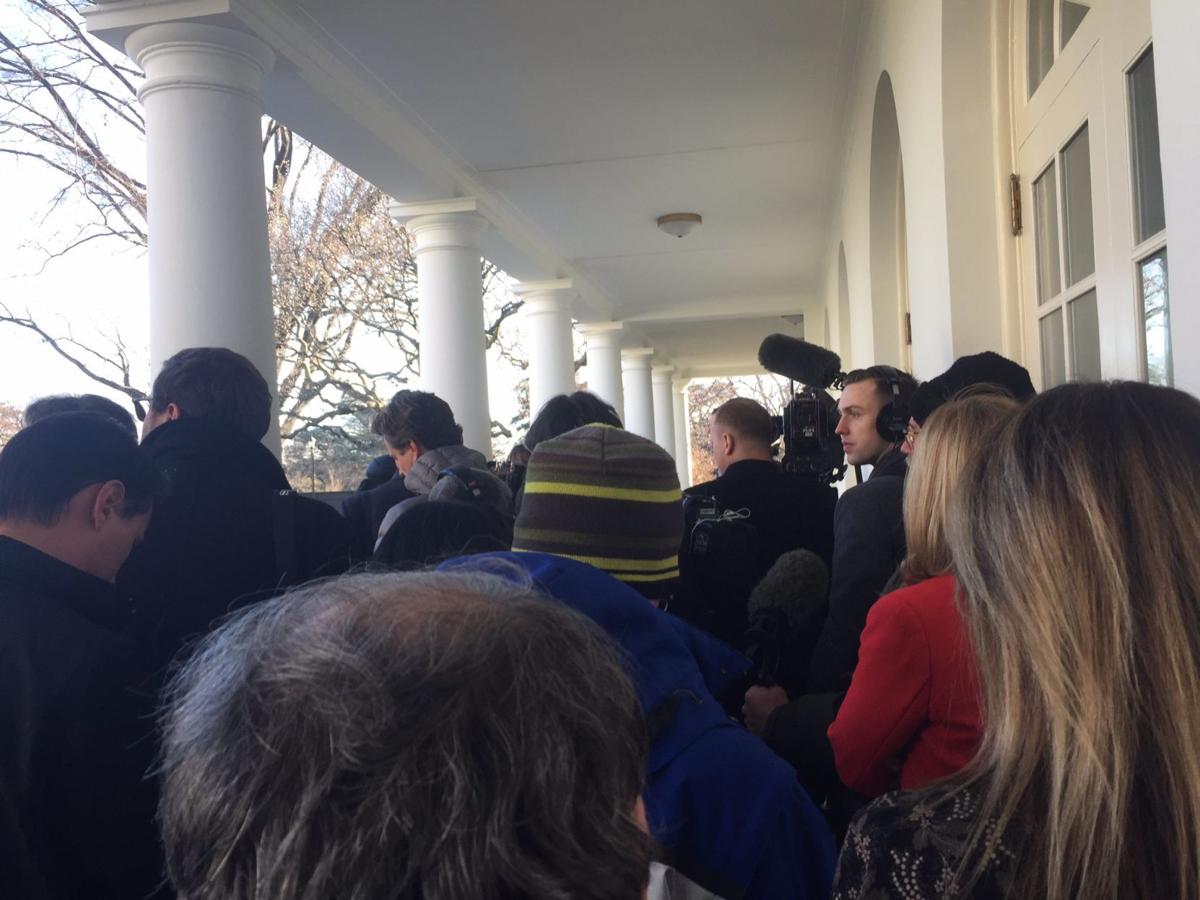 Reporters out the White House for announcement. 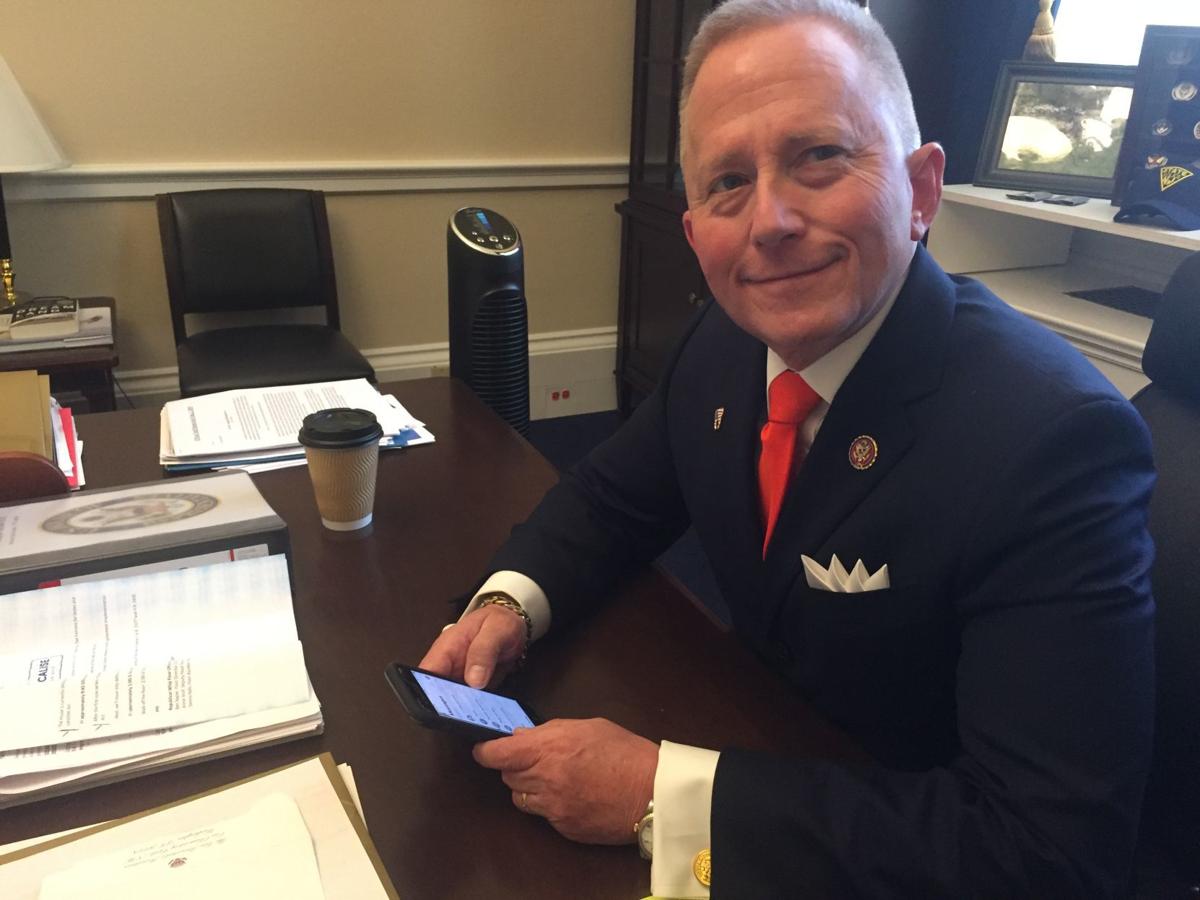 Reporters out the White House for announcement.

WASHINGTON — President Donald Trump welcomed South Jersey Congressman Jeff Van Drew to the Republican Party on Thursday afternoon at an event in the Oval Office, promising to support the freshman in his re-election bid in 2020.

“To me it’s a very exciting announcement,” Trump said of Van Drew’s switch, a day after Van Drew was one of only two Democrats to vote against both articles of impeachment against the president.

Van Drew told Trump he has his “undying support.”

“I’m a capitalist. Socialism has no place in the U.S. I believe in bipartisanship. … I believe in what you are doing with the economy.” Van Drew said.

Van Drew, wearing a bright red tie, said he could no longer stay in a Democratic Party that would threaten him with lack of support over one vote — on impeachment of the president, which he opposed.

“Jeff Van Drew should be commended for refusing to blindly follow Nancy Pelosi’s stampede of hate-filled Democrats over the edge of the political cliff,” said Tom Emmer, chairman of the National Republican Congressional Committee, in a statement. “This is now a Republican seat, and we will fight tooth and nail to ensure it remains a Republican seat.”

Van Drew said the last straw for him was when a young county chairman told him to either vote for impeachment or lose all support of the party and face a strong primary race. He didn’t name him, but he was talking about Atlantic County Democratic Chairman Michael Suleiman.

“It hurt, and it kind of made me think a little bit,” he said.

After decades delivering victories to the Democrats in a Republican-dominated area, Van Drew said he no longer felt welcome.

Suleiman said he was flabbergasted.

“If he has so much vitriol against me he felt the need to mention me in the White House, then good for me,” Suleiman said. “If I’m the reason Jeff Van Drew got pushed out of the Democratic Party, I’ll wear it as a badge of honor.”

Van Drew also talked about some of the negativity he has experienced over the years from Democrats who don’t like some of his more conservative views. He cited the anger directed at him after he sponsored a measure in the New Jersey Legislature to allow “In God We Trust” to be posted in public and private buildings, and to encourage flag flying.

He said he came to his decision to switch parties over time, before his talks with the president, because the Democratic party had moved so far to the left.

“I was always a conservative Democrat to begin with. This is just a better fit,” Van Drew said.

U.S. Rep. Jeff Van Drew’s switch from the Democratic to the Republican Party is eliciting st…

Republican members have offered to lend staff after most of Van Drew’s Washington office resigned this week, he said. Republicans have also been personally welcoming and have even said they would hold fundraisers for him in their districts.

“I don’t even know what party most of them are in,” chief of staff Murphy said.

Early in the day, Van Drew was on the House floor, voting on a resolution to move forward a bill to increase the amount of state and local taxes that can be deducted from gross income from $10,000 to $20,000. He moved from the Democrat to Republican side, looking relaxed and talking to members.

He favors raising SALT limits, and that bill is mostly being pushed by Democrats.

Later in the day, he was due to vote on the bill itself, and on the United States-Mexico-Canada Agreement, a trade deal to replace the North American Free Trade Agreement — another bipartisan effort.

The fact that he is moving from the majority to the minority party shows how strongly he feels, he said.

“The majority always knows a little more (about what is going on in the House) than the minority,” Van Drew said.

Republicans are sometimes not notified about the full schedule of the House when plans change, and sometimes miss votes because of it, he said.

But he said the advantages of being in the majority couldn’t make up for the feeling the Democrats no longer valued him because of his stance on impeachment.

Since the news broke over the weekend, the Democrats stopped sending him information on the upcoming day in the House, he said. Now he gets Republican updates.

He can no longer be part of the Blue Dog Democrats, a group of moderate to conservative Democrats. But he has been invited to join a Republican group that is similarly moderate, called the Tuesday Club, a group of Republican doctors and dentists, and an early-morning prayer group.

Here's a look back at Congressman Jeff Van Drew's freshman year in Congress, representing deep South Jersey as a Democrat. He is expected to s…

WASHINGTON — Jeff Van Drew has been getting calls from friends, asking “Are you all right?” over the last couple of days.

Well, well, well, Trump made a new friend. Considering since being elected over fake emails that every person in the white house quit or abandoned ship, I,d say its an early Christmas present.

Jeffrey is morphing into his “never take responsibility” cult leader with his whiny “how could the Democrats abandon me with just 1 vote.”

Like the “fool on the hill” that 1 vote was the most important vote he could ever cast and he truly messed up seriously.

So let Jefferson run as an Independent touting his Trump endorsement as the 2nd District Repugnants want no part of him.

A great opportunity for a real Progressive Democrat, not the Sweeney endorsed status quo Dem or the retread faux Progressive from 2016.

This weaseled, orangutan face is gonna Trump's new concubine. I demand re-election. Switching party is making me sick to my stomach.

I have worked with and campaigned with Jeff. I am almost too stunned to comment except to say seeing him amongst Kelley Anne Conway, Pence and Trump and all made me sick to my stomach. Maybe the Dems treated him badly but to see him in that company means to me, he has lost some of his way. Another of the many victims of Trump.

How do you switch parties in the middle of your term? That should not be an option. He should be required to resign.

I wonder if the people t hat voted for him can demand a new election.

No, we'll just get rid of him next election, like the bozo in the White House.

I would think that the Republicans would want a strong candidate to keep this seat in 2020. Why would they want to be represented by duplicitous, self-serving, weasel who has opposed the Republican agenda for a decade, and changes with the wind. I expect he’ll be primaried out in favor of a true Republican, especially when they see a credible Democratic challenge. Just another toady to be used and discarded in Trumpworld.

Enjoy your moment in the sun, Jeff. This time next year you'll be out in the cold.