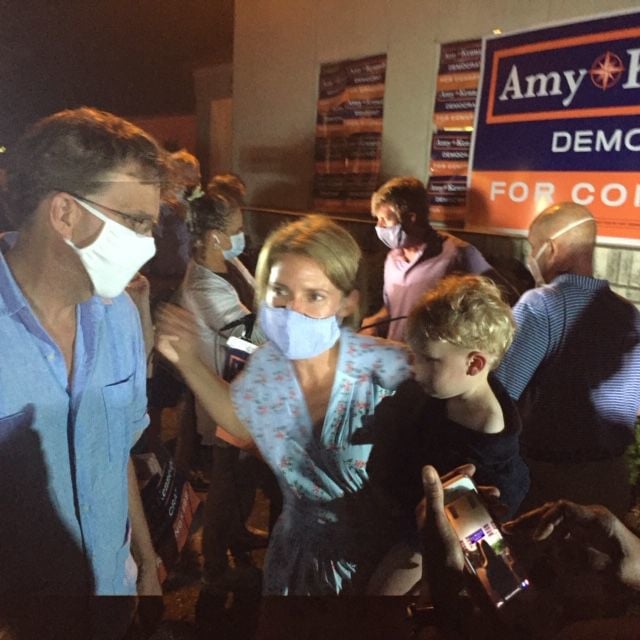 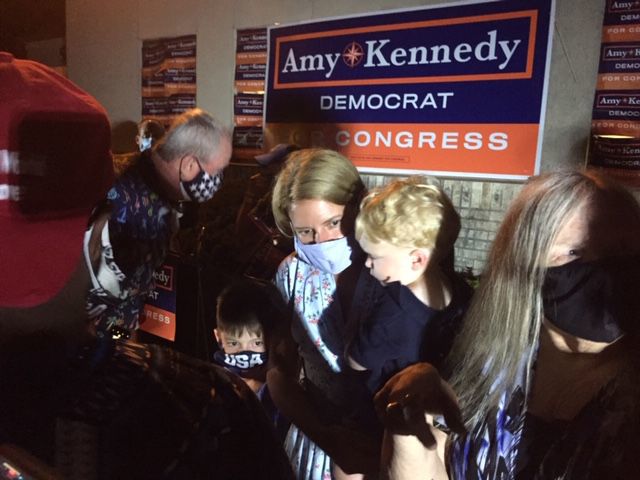 Amy Kennedy and Gov. Phil Murphy, left, greet well-wishers at a victory party for Kennedy outside her Northfield headquarters Tuesday night. Kennedy is the presumptive victor in the 2nd District Democratic congressional primary, after concessions by her main opponents, although final numbers in the race won't be available for at least a week. 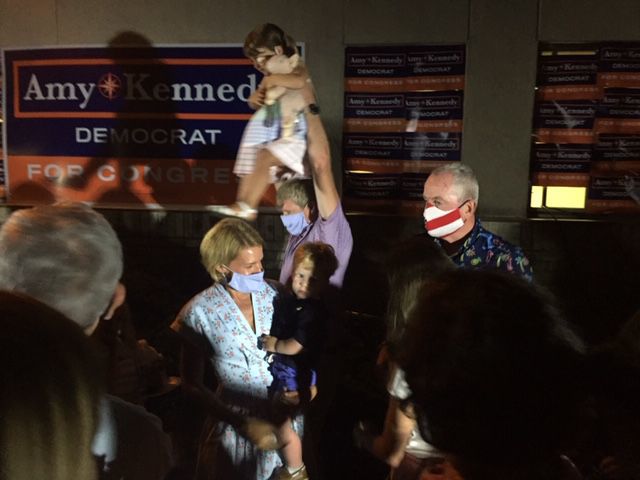 Amy Kennedy, center, greets supporters outside her Northfield campaign headquarters Tuesday night, as her husband, Patrick, hoists one of their children up high to survey the crowd. At right is Gov. Phil Murphy, who recently endorsed Kennedy.

NORTHFIELD — Likely Democratic nominee for the 2nd Congressional District Amy Kennedy, of Brigantine, is ready to mend fences after a heated primary election.

The party needs to be strong to defeat U.S. Rep. Jeff Van Drew, R-2nd, Kennedy said at a victory party Tuesday night at her headquarters.

“The first step is going to be about pulling together support — making sure the Democratic Party is unified for what will be a tough race,” she said of November’s general election against the freshman congressman. “I will make sure I reach out to people not with me in the beginning of this race.”

With about half of the more than 60,000 vote-by-mail ballots cast districtwide counted by midday Wednesday, Kennedy had about 65% of the vote to Brigid Callahan Harrison’s 26% and Will Cunningham’s 12%.

Kennedy had absorbed many attacks from her strongest opponent, Longport’s Harrison, who conceded the election minutes after the close of polls.

The attacks prepared her well for the race against Van Drew, Kennedy said.

“That’s what primaries are for,” Kennedy said. “It’s definitely been helpful to sharpen my own stance and prepare me for what’s coming.”

“We are where I thought we would be,” Van Drew, who beat his primary opponent, Bob Patterson of Ocean City, handily with more than 80% of the vote, said of Kennedy winning the Democratic primary.

He said he will stress the differences in vision between him and Kennedy.

“What my campaign is going to be about is a strong America, strong military, energy production, strong borders and education,” Van Drew said. “And a strong supply chain.”

In a concession video, Harrison said she wanted to coalesce the party to defeat Van Drew.

Harrison had gone after Kennedy regarding her husband, Patrick Kennedy’s donation of $500,000 to a super political action committee that financed $75,000 in attack ads against Harrison, after Amy Kennedy had promised not to self-fund her campaign. She also criticized other aspects of Kennedy’s campaign and family finances.

Kennedy said she had spoken to both Harrison and Cunningham, of Vineland, who based on the earliest results placed a distant third. Kennedy said both candidates were gracious and generous in their remarks to her.

She had not yet heard from state Senate President Steve Sweeney, she said, who supported Harrison, but hoped to talk to him soon.

On Wednesday, Sweeney released a statement on Kennedy’s win.

“The democratic process must be respected, and our goal remains the same — and that is to defeat Jeff Van Drew and elect Joe Biden president of the United States,” Sweeney said. “I congratulate Amy and look forward to her victory in November.”

“Looking at the numbers, Kennedy won in every county,” Froonjian said. “The only ones even a little close were Camden and Gloucester, but Kennedy still won by double digits in Norcross and Sweeney territory.”

George Norcross is a political powerbroker based in Camden County, and Sweeney’s home county is Gloucester. Both had supported Harrison, who had the coveted county line in six of eight counties in the district. That put her name under Biden’s for president and U.S. Sen. Cory Booker, both of whom won their contests.

“In Cumberland and Cape May, there was a 20-to-30-point spread. It’s very early in Atlantic County, but the numbers even now are unbelievably lopsided,” Froonjian said.

Kennedy and many of her supporters said they were surprised by Harrison’s early concession.

“I knew it could be a longer process, and I was prepared for that,” Kennedy said. “I’m grateful to be able to focus on the general election.”

Van Drew ignited Democrats’ ire when he switched to the Republican Party after voting against impeaching President Donald Trump, amassing a crowded field of opponents.

Some contenders had already dropped out, leaving five Democratic candidates in the race Tuesday night. In addition to Kennedy, Harrison and Cunningham, the two others were West Cape May Commissioner John Francis and retired FBI agent Robert Turkavage, of Brigantine.

Kennedy celebrated Tuesday night at her headquarters in Northfield with family, friends and Gov. Phil Murphy and his wife, Tammy.

Kennedy said Murphy made the decision to drive down from his home in Monmouth County after hearing Harrison had conceded just minutes after the polls closed at 8 p.m.

Some politicos had seen the race as a proxy fight between Murphy and the South Jersey political machine run by Norcross and Sweeney, both of whom are considered foes of Murphy.

The gathering was held in the parking lot of the campaign offices on New Road, near the produce store owned by Assemblyman Vince Mazzeo, D-Atlantic, who supported Harrison.

Everyone wore a mask, but it was difficult for all to stay 6 feet apart, especially as just about all attendees seemed to want a photo with the presumed winner.

Amy Kennedy, of Brigantine, was one of dozens of Democratic candidates nationally endorsed Monday by former President Barack Obama, her campai…

When Philadelphia developer Carl Dranoff geared up to exercise his long-held development rights on the Camden waterfront, he says, he was sudd…

As lotteries near billion-dollar jackpot, South Jersey residents reveal what they'd do with the winnings

Pete Manes has dreams of year-round warmth and sunny beaches.

The Democrats vying to challenge Jeff Van Drew in the 2nd Congressional District agree that reforms in policing and immigration are needed. Th…

Amy Kennedy and Gov. Phil Murphy, left, greet well-wishers at a victory party for Kennedy outside her Northfield headquarters Tuesday night. Kennedy is the presumptive victor in the 2nd District Democratic congressional primary, after concessions by her main opponents, although final numbers in the race won't be available for at least a week.

Amy Kennedy, center, greets supporters outside her Northfield campaign headquarters Tuesday night, as her husband, Patrick, hoists one of their children up high to survey the crowd. At right is Gov. Phil Murphy, who recently endorsed Kennedy.