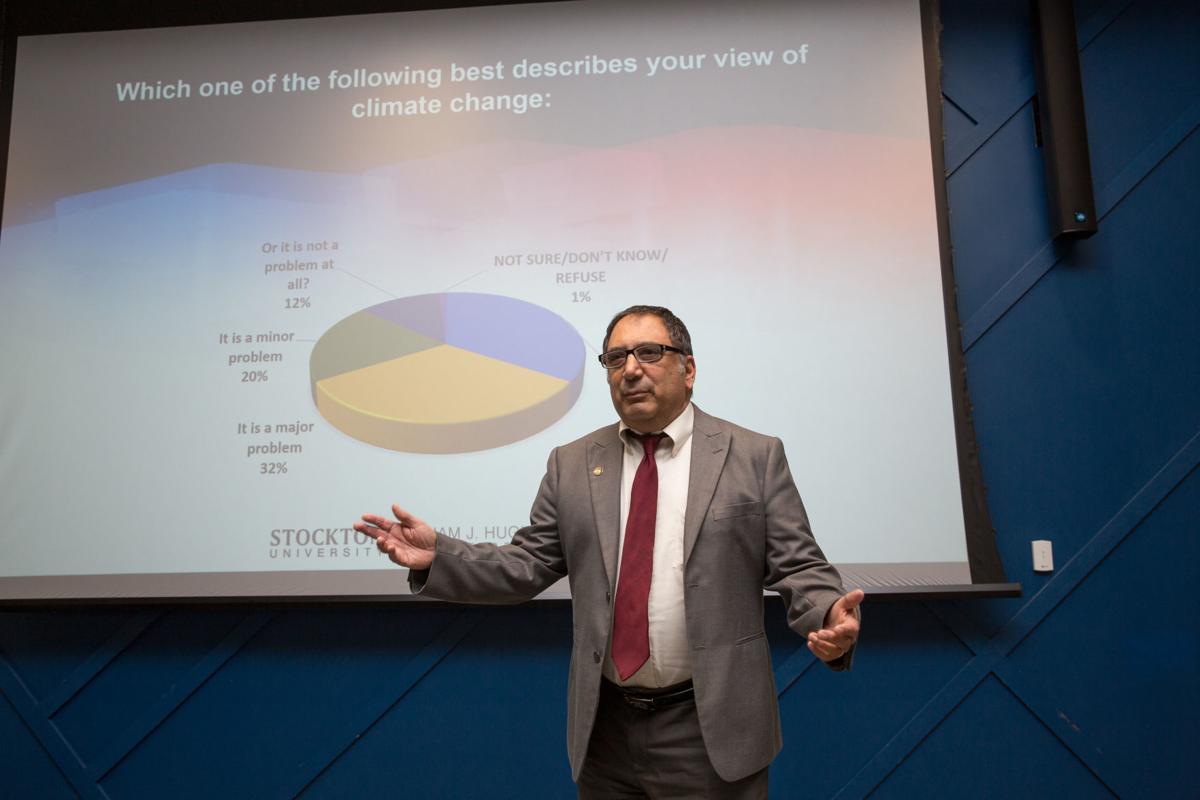 The William J. Hughes Center for Public Policy at Stockton University will partner with a national group to help promote civil discourse during the 2020 presidential and congressional election, said John Froonjian, interim executive director of the center. In this file photo from Oct. 19, Froonjian presents results of a public opinion poll on climate change conducted by the Stockton Polling Institute. 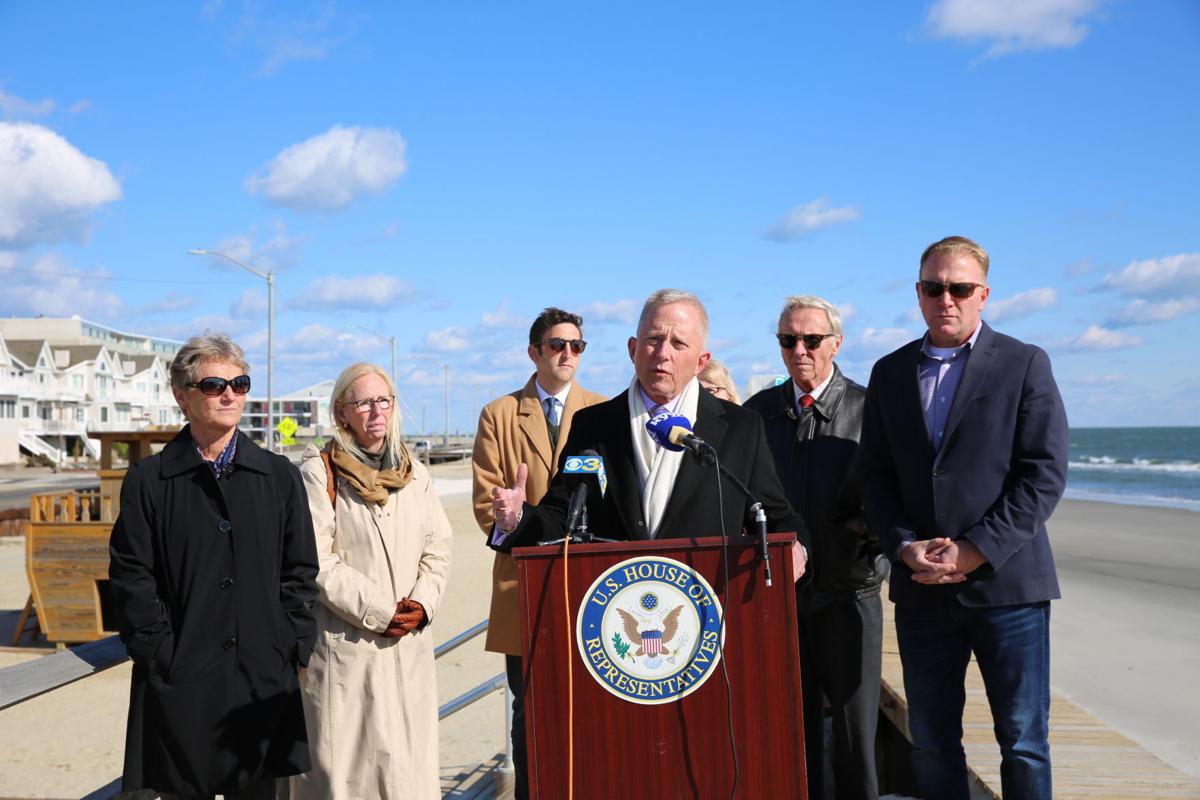 GALLOWAY TOWNSHIP — It won’t make this year’s Thanksgiving and holiday dinners less uncomfortable, but a plan to increase civility in South Jersey politics could help during next year’s presidential election.

The William J. Hughes Center for Public Policy at Stockton University is partnering with the National Institute for Civil Discourse to make the 2020 elections more civil, and will start community meetings on the topic in January.

“Part of the philosophy ... is that you can’t just change an entire society, so you have to change what you can and begin at an individual level,” said Hughes Center interim Executive Director John Froonjian.

The center will open up the meetings to anyone who is interested, and try to keep each to about 25 people so there is time for everyone to participate.

Froonjian said the institute provides materials and guidance on how to help people recognize their own biases, and to see their own tendency to listen only to things with which they agree.

“The ideas are there to elevate the political conversation. It’s not only to get more individuals thinking and talking about it, but to raise the consciousness of everyone,” Froonjian said. “People see there are people out there who consider this important — who want to see political conversations rise above the gutter.”

U.S. Rep. Jeff Van Drew, D-2nd, who is running for reelection next year, called the civility program a “wonderful idea.”

Incumbent Democrats are leading in the 2nd District Assembly race, but there are still 2,068…

“There is just too much literal hate and hurt,” Van Drew said. “Toxicity is the word I use for what goes on.”

Lawmakers share stories about the poisonous political atmosphere, he said, citing a story from a congressman he declined to name on the other side of the aisle. A woman had come up to him when he was in his district “and got as close as she could to his face and said, ‘I hate you.’”

Van Drew said a woman recently approached him in the district, saying, “What’s wrong with you?” over his vote not to proceed with impeachment rules against President Donald J. Trump.

When he explained his vote, she told him, “You do not have enough hate in your heart. You don’t hate Republicans. You don’t hate the president,” as if his lack of partisan hatred was a problem.

Former Republican Gov. Christie Todd Whitman is the honorary co-chairwoman of the institute’s national advisory board, giving it another connection to the state.

“I was a newspaper reporter who covered the Whitman administration in Trenton,” Froonjian said. “I saw firsthand how inclusive, tolerant and respectful the governor was to a great diversity of people.”

Van Drew is a member of the Problem Solvers Caucus in Congress, which brings together Democrats and Republicans to work on issues. He recently helped Republican mayors in Stone Harbor, Avalon and North Wildwood get the Interior Department to change its rules to allow them to mine sand from Hereford Inlet for beach replenishment, rather than going farther afield at an additional cost of $6.5 million.

Bipartisanship is important for getting things done, Van Drew said, but while it used to be a positive thing to be moderate, now it’s considered a negative by many people.

“A moderate is someone who wants to see and learn and be affected by people from all walks of life,” Van Drew said. “But moderates are in the minority, not the majority anymore.”

In addition to the U.S. president, all 435 members of the House of Representatives are on the 2020 ballot.

The center will hold small-group and community discussions in which members of the public will be invited to participate in a dialogue about how to reduce hostility and polarization in political talk.

Sessions will also be offered to Stockton students.

“It’s important for students to know there was a time when people could disagree over politics and not call each other names,” Froonjian said. “We welcome their ideas on how we can return to more civil conversation.”

Whitman and former Gov. Jim Florio will receive Distinguished Lifetime Achievement Awards at the Hughes Center Honors at the Seaview Hotel and Golf Club in Galloway on Thursday.

South Jersey residents divided over impeachment hearings, but most find them hard to follow

ATLANTIC CITY — When he has a customer in his chair, barber Abdullah Anderson tries to keep political conversation to a minimum.

Stockton choir to sing with Mariah Carey in Atlantic City

ATLANTIC CITY — Singer Mariah Carey has selected the Highest Praise Gospel Choir, a Stockton University club, to perform with her during Carey…

ATLANTIC CITY — A city restaurant is planning on giving an early Thanksgiving dinner to those in need.

WILDWOOD — The stretch of Boardwalk in front of the Convention Center was eerily still and unusually quiet Tuesday morning.

OCEAN CITY — Former U.S. Rep. and Ambassador William J. Hughes was a leader on the environment, Pinelands preservation and keeping what is now…

The William J. Hughes Center for Public Policy at Stockton University will partner with a national group to help promote civil discourse during the 2020 presidential and congressional election, said John Froonjian, interim executive director of the center. In this file photo from Oct. 19, Froonjian presents results of a public opinion poll on climate change conducted by the Stockton Polling Institute.