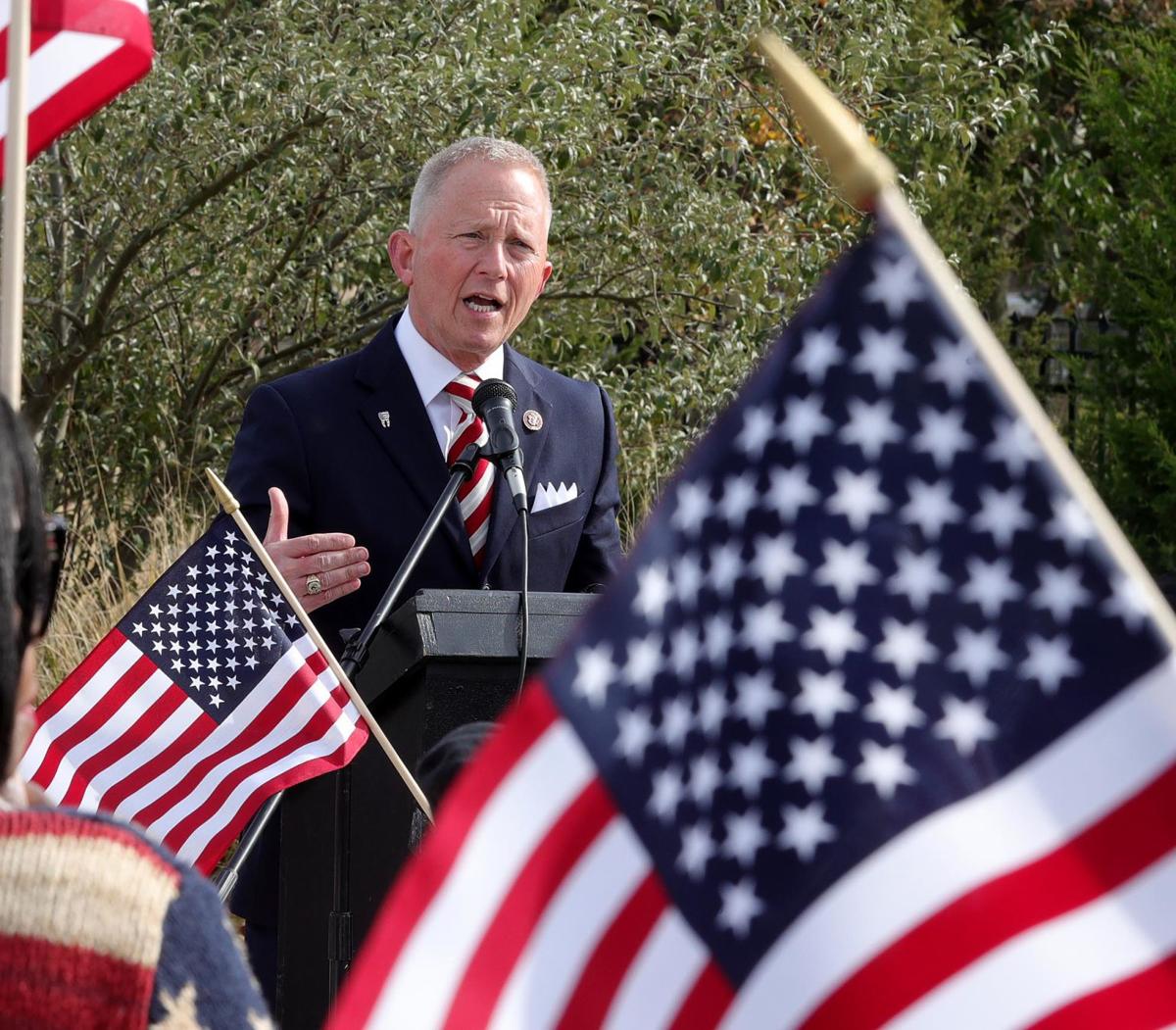 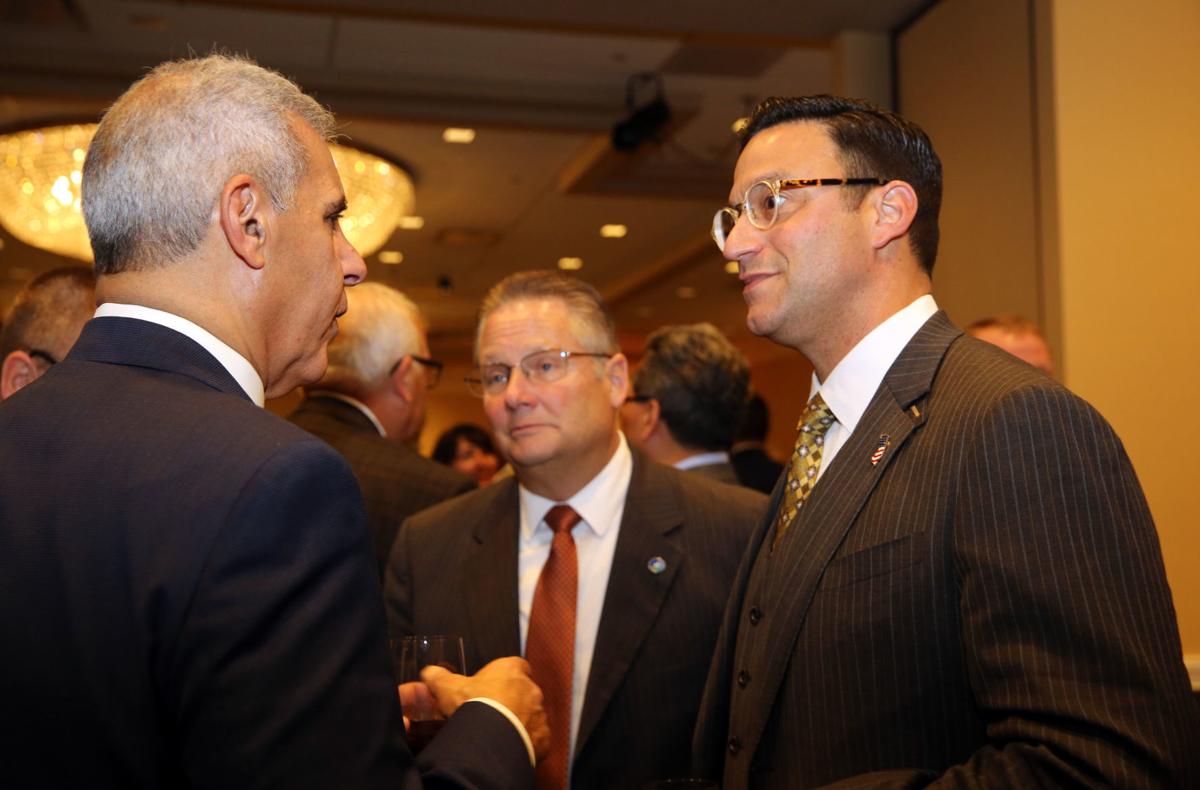 State Senator-elect Michael Testa chats with other guests at the cocktail reception for the 2019 William J. Hughes Center for Public Policy Honors at Seaview Hotel and Resort in Galloway Township (Nov 14, 2019) 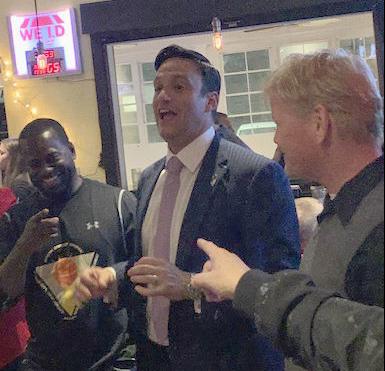 State Sen.-elect Michael Testa Jr., center, with running mates for Assembly Antwan McClellan, left, and Erik Simonsen, celebrate their win in the state's 1st Legislative District on election night. McClellan is the first African American elected to 1st District office, and will be the only Republican African American in the state Legislature. Simonsen is the mayor of Lower Township. 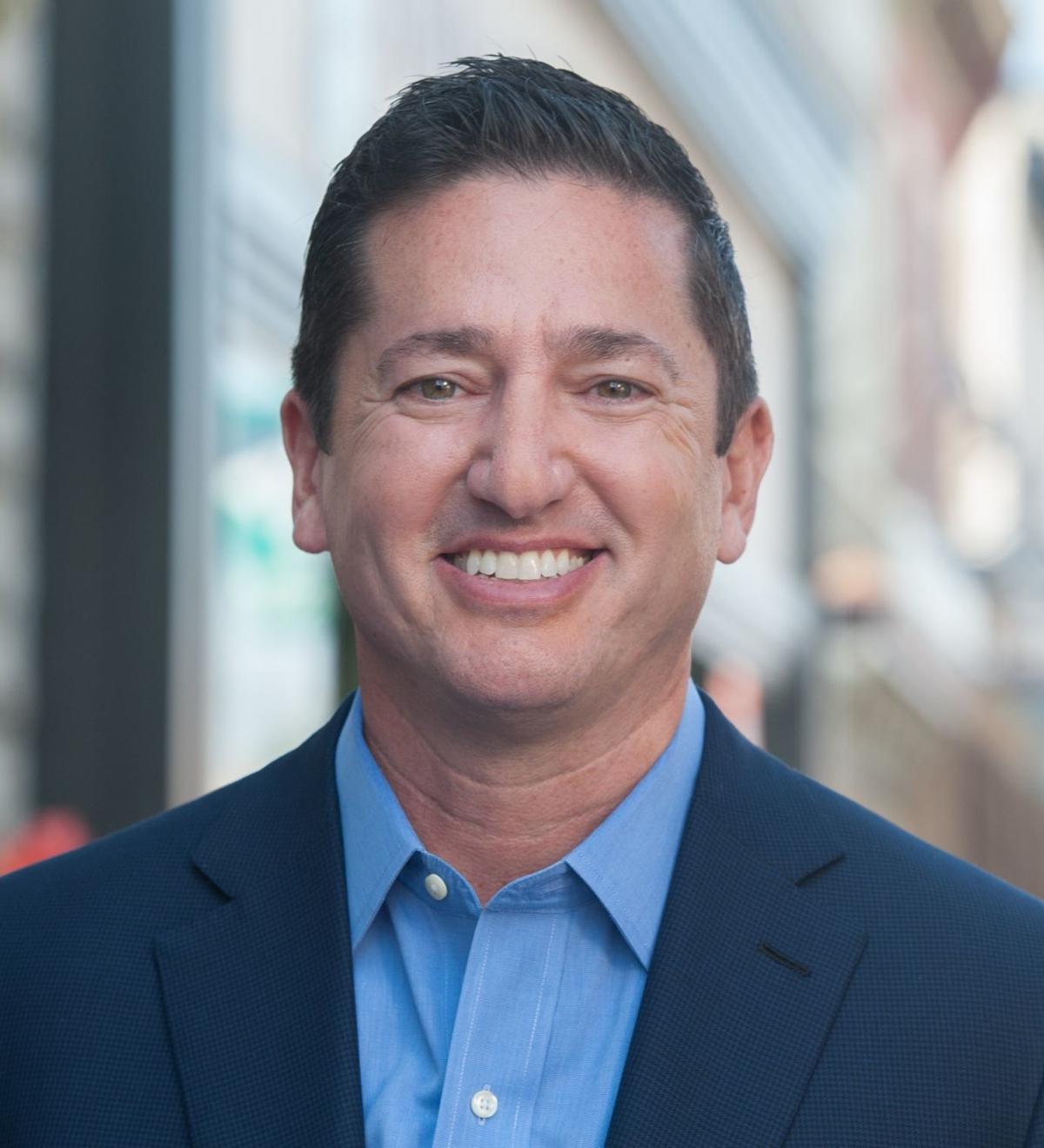 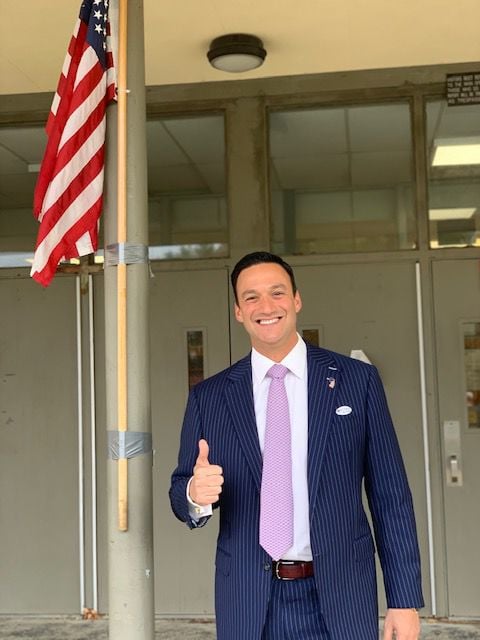 State Senator-elect Michael Testa chats with other guests at the cocktail reception for the 2019 William J. Hughes Center for Public Policy Honors at Seaview Hotel and Resort in Galloway Township (Nov 14, 2019)

State Sen.-elect Michael Testa Jr., center, with running mates for Assembly Antwan McClellan, left, and Erik Simonsen, celebrate their win in the state's 1st Legislative District on election night. McClellan is the first African American elected to 1st District office, and will be the only Republican African American in the state Legislature. Simonsen is the mayor of Lower Township.

“I think results in South Jersey were terrific from a Republican perspective,” said David Richter, who moved this year to Avalon from Princeton, one of three Republicans who have announced their candidacies to challenge Van Drew. “Certainly Mike Testa and his team winning in LD1 ... is a very good sign for what’s coming up in 2020.”

“As much as it’s of course disappointing, it was not completely surprising,” Van Drew said of the loss by state Sen. Bob Andrzejczak and Assemblymen Bruce Land and Matt Milam, all D-Cape May, Cumberland, Atlantic, who ran as Team Van Drew.

“Our closest elections have always been during those years” when the Assembly was at the top of the ticket, Van Drew said.

The winners were Vineland attorney Mike Testa, who will fill Van Drew’s state Senate term given up when he became a congressman; Ocean City councilman Antwan McClellan, the first African American to represent the district; and Lower Township Mayor Erik Simonsen.

The Cook Political Report House Analysis puts Van Drew and Rep. Andy Kim, D-3rd, in the Democratic Toss Up column. That means their districts are held by Democrats, but either party has about an equal chance of winning.

Both are freshman Democrats elected in 2018 to replace Republicans, and history has shown incumbents are most vulnerable to losing the first time they run for re-election.

The odds are reflected in how the state races went this year.

New Jersey’s 2nd Congressional District, in which Van Drew and his opponents will compete, includes all or most of the state’s 1st, 2nd, 3rd, 5th, 8th and 9th legislative districts. In the Nov. 5 election, half went Republican for Assembly seats (1st, 8th and 9th) and half went Democratic (2nd, 3rd and 5th).

In Kim’s 3rd Congressional District, results were similar. But overall the Republicans have more of an edge in the 3rd District, analysts say.

While they didn’t win in the 2nd Legislative District, which covers much of Atlantic County, Republicans exceeded expectations there, Richter said. The team of former longtime Brigantine Mayor Phil Guenther and Atlantic County Freeholder John Risley won at the ballot box, but lost after mail-in ballots were counted.

“Atlantic County is certainly more purple than the rest of South Jersey,” Richter said. Democrats outnumber Republicans there 53,185 to 37,330.

Van Drew does, however, worry the impeachment process against President Donald J. Trump could hurt him next year if it continues in Congress.

He was one of only two Democrats to vote against rules to proceed with impeachment, angering some of the Democratic base. He has said there should not be an impeachment so close to an election, when the people can decide. He has also said nothing he has seen so far about allegations against Trump rises to the level of impeachable offenses.

“The more that it goes on, the more vocal and the more enthusiastic and angered Republicans are going to be,” Van Drew said. “The bottom line is this could really energize their base and push them into working even harder. There might be a backlash.”

He predicted the House will vote to impeach and Trump will be exonerated in the Senate.

“We will have the same president, the same candidate, but the electorate will be even angrier,” Van Drew said. “That’s not what drove me to (vote against the impeachment process), but besides everything else, people may not get the result they think they are going to get.”

The 1st Legislative District, where there is a tight Assembly race and the state's only stat…

A confluence of state and national issues worked against Democrats in the 1st Legislative District, said John Froonjian, interim executive director of the William J. Hughes Center for Public Policy at Stockton University.

The Democrats’ vote on proceeding with the impeachment process came right before the Nov. 5 election, as did Democratic Gov. Phil Murphy’s push to keep Cape May County from continuing its 287(g) agreement with U.S. Immigration and Customs Enforcement. Both actions were unpopular among 1st District Republicans, and energized them to vote.

Even though Van Drew, who entered Congress Jan. 1, voted no on impeachment, “he’s still in the middle of a political maelstrom that was riling up the Republican base,” Froonjian said.

It’s difficult to tell whether Van Drew’s no vote may have caused some Democrats to stay home Nov. 5, Froonjian said.

“But it clearly demonstrates the incumbents did not get their people out,” he said. “When you have a really low voter turnout, anything can affect things easily.”

Richter said Van Drew has a tough road ahead, with the Democratic base on one side pushing for impeachment and the overall conservative nature of South Jersey.

“Now he’s got the liberal Democratic base furious with him, and they are going to do one of two things: Either put up a primary opponent, which is likely at this point. He could very well lose. Or they could stay home next November,” Richter said. “Politics in general has been all about Trump.”

LD1 (All of Cape May County, parts of Cumberland and Atlantic)

LD2 (Most of Atlantic County)

LD3 (parts of Cumberland and Gloucester counties, all of Salem)

U.S. Rep. Jeff Van Drew, D-2nd, reassured constituents Thursday night he has been a Democrat all his life and will remain one, even as he cont…

CAPE MAY — With funding in place from the city, Cape May County and the county library system, Cape May is poised to finally renovate the hist…

Republicans swept the 1st District legislative race and almost won in the 2nd, despite being outspent about 3:1 by Democrats, according to a T…

TRENTON — There was a celebratory mood Thursday morning in the state Senate chamber, as the first Republican to flip a New Jersey Senate seat …

The swearing-in of two new members of the state Assembly on Tuesday will leave vacant seats in two municipal governments in Cape May County.