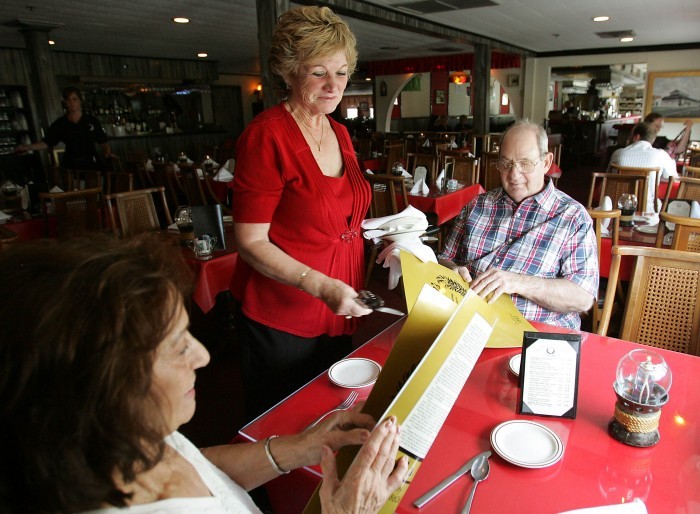 Hostess Pauline Taylor, a 35 year employee of Busch's, seats Dave and Dorothy Fetters of Delran for dinner. The Fetter's have been customers of Busch's since 1958. Busch's Seafood Restaurant, a landmark establishment in Sea Isle City, is in its final year of service this season. Although Busch's will be closing for good at the end of the summer, Owners Al and Kim Schettig will be opening up a smaller, seafood take-out version of the restaurant, next year on the adjacent block. Tuesday Jun 15, 2010. (Dale Gerhard/Press of Atlantic City). 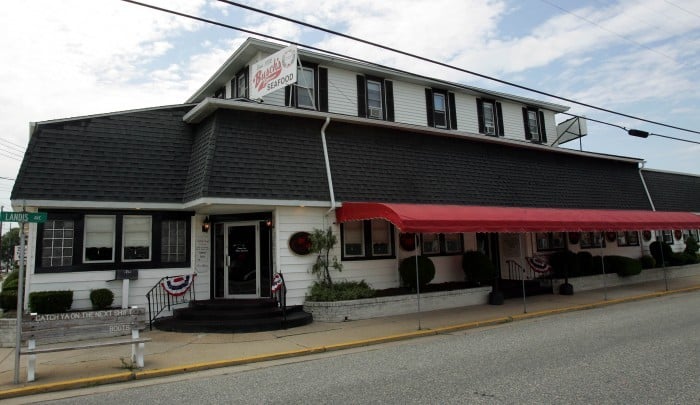 Busch's Seafood Restaurant, a landmark establishment in Sea Isle City, was slated to close at the end of the summer, until a real estate deal fell through 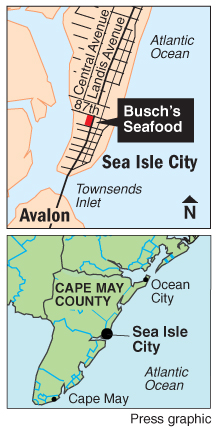 SEA ISLE CITY — Busch’s Seafood is bracing for its last summer after 98 years of serving shore vacation meals to generations who have enjoyed its traditional  deviled crab and lobster tail.

The 450-seat seafood restaurant, bar and packaged goods store at 87th Street and Landis Avenue is being sold to a development company that plans to demolish the structures to build a city-block-wide complex of several new restaurants with 13 condominiums above them.

Meanwhile, Busch’s Seafood will remain in Sea Isle City, but will operate as a takeout seafood establishment across the street at the site of the restaurant’s prep kitchen.

For fifth-generation owners Al and Kim Schettig, the decision to sell was not easy, and not something they welcomed, said Al Schettig, a chef who was stirring she-crab soup Tuesday afternoon before the restaurant opened.

Schettig, 63, of neighboring Ocean View, Dennis Township, said the building would require costly renovations in the coming years. And the overhead, expenses and labor costs made the summer restaurant, which is open 99 days of the year, no longer financially viable.

The restaurant employs more than 100 people in the summer, including 10 Bulgarians through a work-exchange program, he said.

“Many of the people who come in say where are we going to go for dinner (after it closes)?” Schettig said. “To me, it’s a testament, if people miss you, you must have to be good.”

The 86th Street Development LLC, whose principals are local businessmen Joe Ragusa and Christopher Glancey, are the contract purchasers of the property, records at the city’s construction office show.

Glancey said their decision to buy the property was based on a zoning change approved by Sea Isle City Council in 2008 to allow more residential units above businesses. The change was designed to encourage businesses from becoming entirely residential properties.

The change to city zoning meant about 10 more residences could be built above the commercial units, making the project economically feasible, he said. The company, which plans to start construction in October, has a contract to buy but won’t make settlement until the fall, he said.

At Busch’s Seafood, business was off last year, Schettig said, but the costs of maintaining and running such a large restaurant — coupled with an offer last year to buy — swayed the decision, said Schettig, who did not disclose the price.

Busch’s Seafood is in the southern end of Sea Isle City near Townsends Inlet. It is among a small stretch of businesses in an area a few miles from downtown Sea Isle City.

Busch’s started as a hotel in 1882 at a time when Sea Isle City bore little resemblance to what most shoregoers know today. The hotel even predated the Ludlum Beach Lighthouse, which was constructed three years later at the urging of city founder Charles K. Landis.

Busch’s established the restaurant in 1912. Today, the large white-and-black building is a landmark site for motorists and bicyclists crossing the Townsends Inlet Bridge from Avalon.

The traditional seafood eatery will be the latest of the long-established restaurants to close on the southern New Jersey shore in the face of developments that made such establishments less attractive than residences or other uses. In 2008 in Stone Harbor, Henny’s Restaurant on Third Avenue closed after more than 70 years. A development firm plans an upscale hotel and restaurant.

Schettig has high hopes for the takeout seafood business that will become Busch’s future.

A film company is making a commemorative documentary on the Busch’s Seafood that the restaurant plans to sell in August and play at the takeout seafood business next year.

Al and Kim Schettig’s children — Logan, 17, and Tyler, 13 — may one day inherit the family seafood business, if they so choose, Al Schettig said. Logan has worked as a line cook who taught foreign work exchange students how to use the dishwasher.

“We’re going on, and we’re continuing on in the highest-quality manner,” he said.

The decision to adapt the business has drawn mixed feelings.

“That’s a shame,” said Anna Biegalski, of Avalon, who was riding her bicycle past the restaurant on Tuesday afternoon. “They did the same thing in Avalon, too, tearing down lots of buildings like Donnelly’s Deli.”

“If you’re going out to dinner with the family, (Busch’s) is where you go,” she said. “It very established — almost like a landmark.”

Annie Ryan of Avalon said, “My parents come here a lot, a place to get seafood in Sea Isle.”

Memories remain for Busch’s. But not the 6-foot lobster—that was stolen.

SEA ISLE CITY – Bob Phillips stood across the street from Busch’s restaurant, listening to the sounds of an excavator crunching through the la…

Hostess Pauline Taylor, a 35 year employee of Busch's, seats Dave and Dorothy Fetters of Delran for dinner. The Fetter's have been customers of Busch's since 1958. Busch's Seafood Restaurant, a landmark establishment in Sea Isle City, is in its final year of service this season. Although Busch's will be closing for good at the end of the summer, Owners Al and Kim Schettig will be opening up a smaller, seafood take-out version of the restaurant, next year on the adjacent block. Tuesday Jun 15, 2010. (Dale Gerhard/Press of Atlantic City).

Busch's Seafood Restaurant, a landmark establishment in Sea Isle City, was slated to close at the end of the summer, until a real estate deal fell through