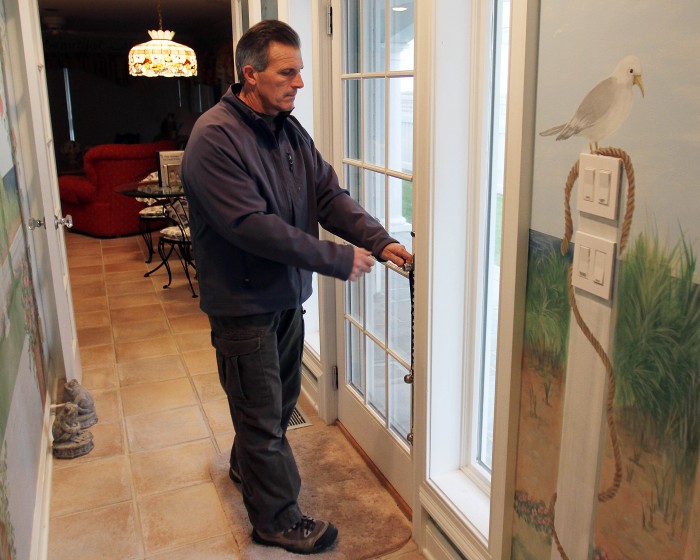 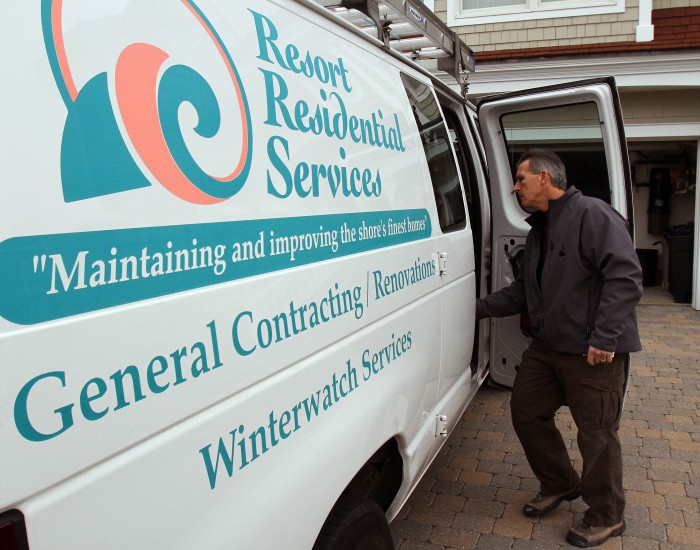 OCEAN CITY — Pete Patrizzi opened the door to the million-dollar beach house and checked that the alarm was functioning.

Inside, the home was still as a museum. Nobody had lived here in several months, and the air was slightly stale. The temperature was a cool but comfortable 60 degrees as the furnace whirred to life in a low hum.

“I spend more time in this house than the owners do,” said Patrizzi, general manager of Resort Residential Services.

His business keeps silent watch over Ocean City, Ventnor, Longport and Margate summer homes in the long off-season and repairs any minor damage caused by storms, leaks or — occasionally — burglars.

Patrizzi checked to ensure the front and side doors were locked. Then he ventured to the sliding-glass doors facing the panoramic ocean view that gives this oceanfront neighborhood its name: the Gold Coast.

Patrizzi stepped out onto the deck. The beach was deserted in both directions as far as he could see. He stepped back inside and relocked the doors, slid the deadbolts in place and set the alarm.

Burglars have been busy in the south end of Ocean City this year, where they have ransacked 20 homes, mostly for high-end electronics. The south end is the quieter side of Ocean City, where block after block sits empty for most of the winter. Some years these burglaries can go virtually unnoticed until spring, when the owners return to the shore to reopen their homes. But lately second-home owners have been spending more winter weekends at the shore, police Lt. Steven Ang said.

“People would go south and forget about their seasonal home through March or April. But in Ocean City, because of all the activities we have through New Year, we have a pretty good volume of weekend clientele,” Ang said. “Up until the first of the year, we’re seeing people use their houses on the weekends.”

So the reports have been trickling in about break-ins, especially on the 4100, 4400 and 4800 blocks of Central Avenue.

The burglars have been brazen, breaking down doors by shattering their frames to gain access to the beach side of the homes, Ang said.

“They have to be making noise,” he said. “They’re picking these isolated neighborhoods. It’s obvious someone has taken the time to stake out and watch the properties for a few days.”

Once inside, the burglars have taken their time, disconnecting home-theater components and flat-panel televisions, he said.

“They’re being more cautious removing the equipment. They’re not rushing when they’re inside these properties,” he said.

Vacation homes are annual targets of burglars in resort towns and seasonal campgrounds.

In one memorable case in 2003, a homeless man took up residence in a vacant West Avenue summer cottage, pawning some of the home’s antiques, decorations and furniture for food money. The homeowner grew suspicious when he got a high electric bill in the mail.

“We generally do see criminal activity like this in the wintertime, when the barrier islands are vacant,” Prosecutor Robert Taylor said.

There is less foot traffic on the south end, since many businesses there close for the winter. And a loud bang or crash is a common enough sound on an island where contractors are rebuilding beach homes, despite a wintry economy.

Patrizzi has filled out police reports on behalf of clients whose homes were burglarized. Some of his clients in Atlantic and Cape May counties spend the winter as far away as Singapore. When the burglar or fire alarms go off, he is the contact for police and fire departments.

“We had a house that someone tried to break into last year. They threw an umbrella stand through a sliding-glass door,” he said. “The alarm system stopped them.”

Patrizzi said he knows if something is amiss the moment he sets foot in one of his clients’ homes.

“It might be a funny odor or the little noise of wind from a popped window,” he said.

On Dec. 10, he checked on a home at 35th Street to find the TV remote control out of place on a coffee table next to condensation marks from a carelessly placed drink. He phoned the homeowner and learned his family had paid a recent visit.

Once, he checked on a home after one of southern New Jersey’s famously punishing northeasters to find a 6-foot skylight had been blown off the roof of the house.

But it’s the little things that keep him busy — jiggling the handle on a running toilet, lowering or raising the thermostat in accord with the clients’ wishes, and making sure the home weathers another New Jersey winter.

“Some of these houses have five bedrooms and four baths with Jacuzzis. These are elaborate homes. We can’t take a chance to have damage,” he said.

Police said they will check on more properties looking for signs of disturbance to give the burglary suspects a shorter window of opportunity to strike.

A breakdown of burglaries at the shore by county