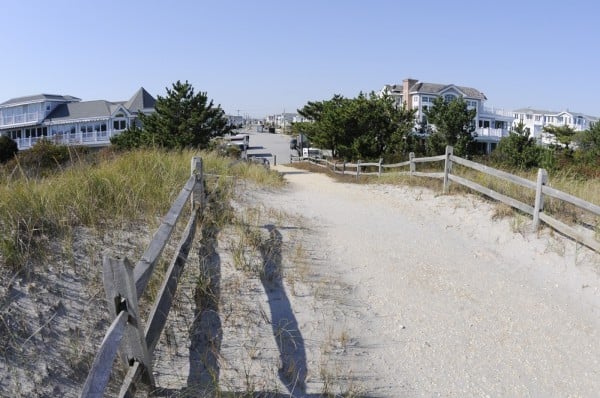 The 1962 March storm destroyed a beach house located at 75th Street in Avalon. The area is now all dunes, and the borough argues it has to stay that way. 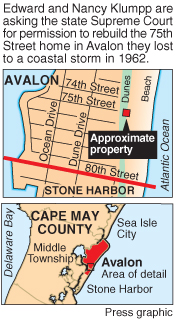 AVALON - A Moorestown couple is asking the state's highest court to consider whether the borough stole a beachfront parcel from them after the great northeaster of 1962.

Edward and Nancy Klumpp's Nantucket-style home on 75th Street was destroyed by the infamous storm. The couple looked into rebuilding the home over the years, and in 1997 applied for a coastal permit.

By then, the borough had built an extensive network of dunes along the ocean to protect people from future coastal storms.

The case has resonated among coastal towns across New Jersey. Avalon has fielded calls from a dozen other beach towns that also have vacant beachfront lots in private hands, Mayor Martin Pagliughi said.

A state Appellate Court this year sided with the borough, marking a second victory for Avalon over recent efforts by homeowners to rebuild on the beach.

A lower court ruled in 2008 that the borough effectively took possession of the property after the storm when it built the dunes and made other public improvements. The couple was obligated to seek compensation years ago, when they first learned that Avalon was turning their beachfront lot into a protective dune, the court said.

The state Appellate Court agreed, saying the borough effectively claimed the property through inverse condemnation - a process of taking land for the public good without paying compensation to the owners.

"Inverse condemnation occurred here by both the borough's physical occupation of plaintiffs' property for public use and its adoption of the regulatory scheme to support the protection of the engineered sand dune," the court ruled.

Months after the storm, the borough launched a property-exchange program to compensate homeowners whose lots were being converted to public dunes. But the Klumpps could not reach an agreement on compensation at the time, according to their lawyer, Richard Hluchan.

The Klumpps' initial complaint was for street access to the now-landlocked property - one of the conditions needed to obtain a building permit.

Hluchan filed an appeal to the state Supreme Court, along with friend-of-the-court briefs from the Builders League of South Jersey, the property-rights group The Pacific Legal Foundation and the New Jersey Land Title Association.

"It was only in 2005 that the borough dreamed up this idea that they owned it because they took it in 1962. There is not a shred of evidence to support this," Hluchan said.

He noted the borough sends property notices to the Klumpps about neighborhood zoning issues. Until the lower-court decision, the property was listed in the couple's name in tax records. The owners paid property taxes continuously since 1962.

According to court records, the property is assessed at just $100. The annual tax bill amounts to just 46 cents.

Avalon won a similar court argument in 2007 over Henry Raab and his sister, Clara Montagna. The siblings wanted the borough to pay for a beachfront lot at 76th Street that, likewise, had been covered in dunes since the 1962 storm.

"It's getting a little ridiculous," the mayor said. "They lost (the property) after the '62 storm and the U.S. Army Corps of Engineers set the dune line and said there will be no construction past it."

Pagliughi said the borough's coastline has about 20 other privately owned lots - former beachfront cottages that met the same fate after the storm and were replaced with dunes.

"From the research we did, there were public hearings back then. The people were given notice they had to approach the municipalities to get compensation," he said.

Borough solicitor Michael Donohue represented the borough in the lawsuit. Donohue, who is running for 1st District Assembly, could not be reached for comment Wednesday.

The 1962 March storm destroyed a beach house located at 75th Street in Avalon. The area is now all dunes, and the borough argues it has to stay that way.