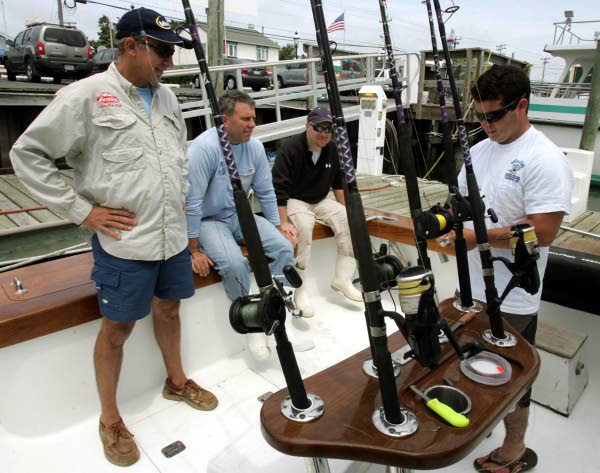 From left: Andy Locascio, Mitch Wergiles and Steve Palmo, all from Long Island, New York, watch as captain's mate Josh Zar of the Hooked Up charter fishing boat in Cape May, prepares rigs for drum fishing in the Delaware Bay. The trio were chartering the boat for a day of fishing. Story on the Charter fishing boat industry. Thursday May 27, 2010. 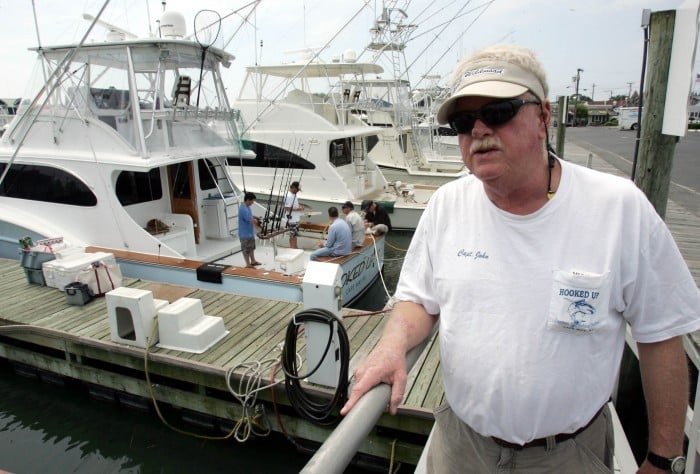 Captain John Sowerby runs the charter boat "Hooked Up" out of the Cape May Marina and sometimes takes as many as two trips per day. 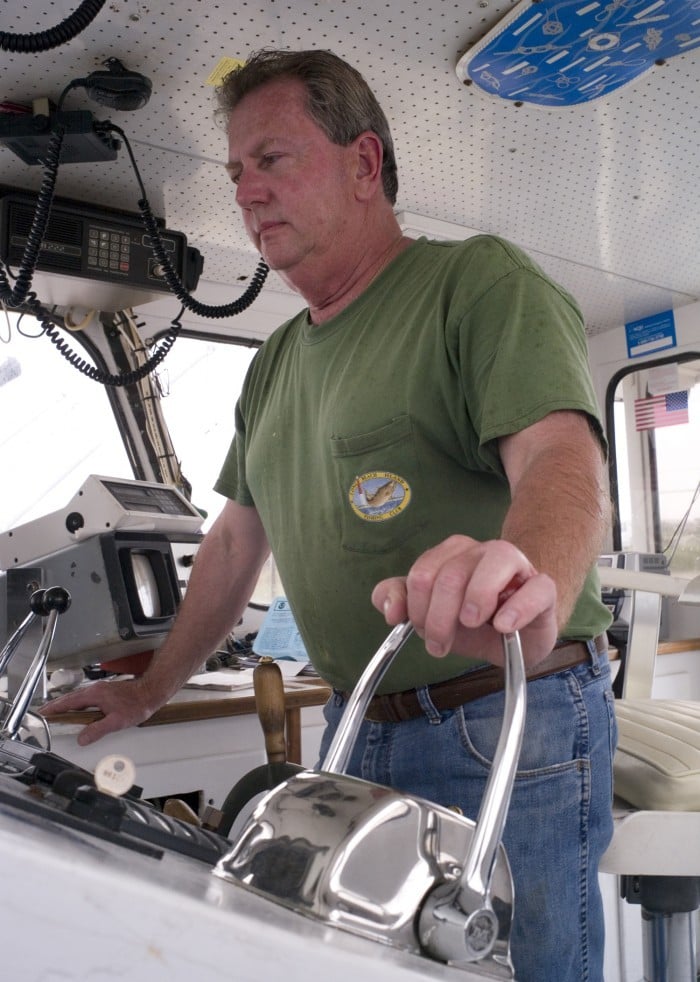 CAPE MAY — Local charter boat captain Rick Shepanski worries about some of the charter boats he sees carrying customers offshore. He doesn’t think they always belong out there.

“I’ll be 60 miles offshore in the middle of January and there’ll be a boat out there that shouldn’t be out there, a single-engine outboard,” Shepanski said.

He said he makes sure his boat is safe, and marine officials and statistics suggest that the boating public has little to worry about.

The region’s Coast Guard inspection chief says that overall, the charters are safe, and accident statistics appear to back him up. Captains must be licensed and drug-tested, and larger boats are inspected every year.

Excursion boats are a $457 million industry in New Jersey, according to federal data that is kept on the bulk of the excursion fleet: party and charter boats. The excursion boat industry ranges from barely regulated small charters, which are known as “six-pack charters” that carry six passengers or fewer, to the highly regulated ferry boat. Excursion boats take passengers fishing, whale-watching, dining, parasailing and sightseeing.

The boats Shepanski sees are often the small charters, which are not required to be inspected by the U.S. Coast Guard. They are required to carry some basic safety equipment, such as life preservers, but they don’t have to carry emergency radio beacons or inflatable life rafts.

Though not required, Shepanski said he has both on his small charter boat.

Shepanski’s advice to vacationers planning a deep-sea fishing trip is to do a little research first. “You might want to ask the locals who to go with instead of just picking a boat off the Internet,” Shepanski said.

The U.S. Coast Guard does not even know how many small charters are out there, said Lt. Cmdr. Jonathan Maiorine, the chief of the Inspection Division of Coast Guard Sector Delaware Bay.

Since they are not inspected, the Coast Guard doesn’t track the numbers. But Maiorine said the smaller boats have a voluntary inspection program. One bit of advice he has for the public is to look for a Coast Guard inspection sticker on them.

“Uninspected passenger vessels can request an inspection and get a decal. Look for the decal,” Maiorine said.

All excursion boats, even the smallest ones, have licensed captains who are required to undergo drug testing. License requirements increase with the size of the boat. For some boats, the hull material and the construction are approved prior to the keel being laid.

Coast Guard Sector Delaware Bay covers the bay and north along the Atlantic Coast to Shark River Inlet in Monmouth County. It inspects all excursion boats except small charters at least once a year. Maiorine believes the vessels the Coast Guard inspects are very safe.

“I go on the boats and I take my family, and I’m chief of inspections for this whole zone. It’s as safe as it can be,” Maiorine said.

There don’t seem to be many accidents considering the size of the industry. Figures from the National Oceanic and Atmospheric Administration show there were 630,000 charter and party boat trips in New Jersey in 2006, although each person on the boat counts as a trip. That year, there were 16 incidents, what the Coast Guard refers to as “reportable marine casualties.” Those incidents can range from groundings to bridge strikes to death and injuries.

However, no major accidents occurred in 2006.

The last fatal charter boat accident in southern New Jersey was April 30, 2005, when Nicholas Johs, 14, of Staten Island, fell off a whale-watching boat off Cape May Point and died.

There have been some major disasters on excursion boats in the past.

The worst charter boat accident on the East Coast was on Labor Day weekend in 1951 when 41 drowned after the Montauk, N.Y., boat Pelican capsized in Long Island Sound.

The worst accident locally was in July 29, 1906, in Hereford Inlet when a southeast storm caused two sloop yachts laden with out-of-town fishermen to capsize, killing 13 men.

Some of the accidents have led to regulation changes.

Tony Bogan, of the trade group United Boatman, which represents 120 vessels in New Jersey and New York, calls the state of his industry tenuous at best due to regulations and the economy.

But while the economy can change, the price of diesel can change and regulations can change, safety is one thing that Bogan does not want to change.

Bogan, who owns Bogan’s Deep Sea Fishing Center in Brielle and Point Pleasant Beach, said his is a highly-regulated industry and most of the regulations are about safety.

“Are we safe? It’s a common question. We tell them we are inspected every year by the Coast Guard. All our captains are licensed by the Coast Guard, and every two years our vessels are pulled out of the water and inspected on land. All our employees from captains to mates are required to be drug-tested. If you sail in cold water more than 20 miles offshore you have to be able to flood any one compartment to the deck and be able to float with a full load of people and a full load of fuel. All inspected boats have watertight bulkheads,” Bogan said.

However, all the regulations in the world can’t address operator error, a factor behind most marine disasters and one that often relies on one person.

“It’s really the captain’s responsibility to make sure it’s operated in a safe manner. The captain is ultimately responsible,” Maiorine said.

Rick Shepanski knows this. That could be why he worries when he sees a small charter boat 60 miles offshore in January.

Charter boats not an easy way to make a living, captains say

Charter boats are a big business in New Jersey, but they are not always a great business for their operators.

From left: Andy Locascio, Mitch Wergiles and Steve Palmo, all from Long Island, New York, watch as captain's mate Josh Zar of the Hooked Up charter fishing boat in Cape May, prepares rigs for drum fishing in the Delaware Bay. The trio were chartering the boat for a day of fishing. Story on the Charter fishing boat industry. Thursday May 27, 2010.

Captain John Sowerby runs the charter boat "Hooked Up" out of the Cape May Marina and sometimes takes as many as two trips per day.

Capt. Ed Yates checks the engines on his fishing charter boat "Hunter" on Wednesday.
© Copyright 2020 The Press of Atlantic City, 1000 West Washington Ave. Pleasantville, NJ | Terms of Use | Privacy Policy
Powered by BLOX Content Management System from TownNews.com.
You don't have any notifications.