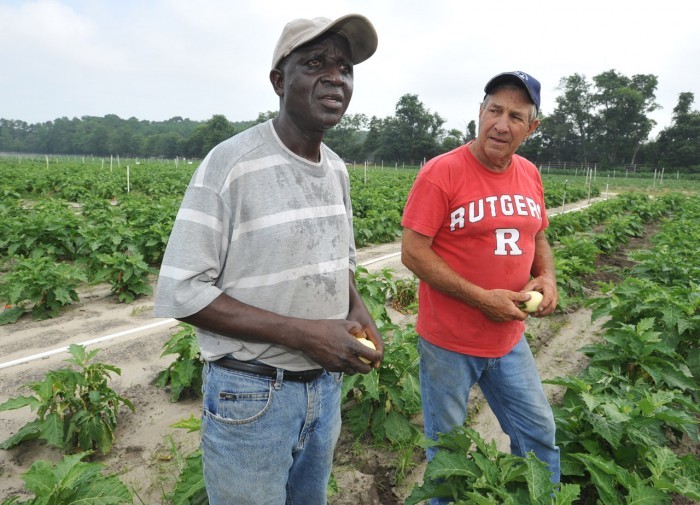 Farmers Morris Gbolo, left, and former state Secretary of Agriculture Art Brown, both of Galloway Township, stand in a field of bitterball eggplants Wednesday at their farm, B&B Farms, in the Pomona section of Galloway Township. The pick-your-own farm grows several African vegetables. 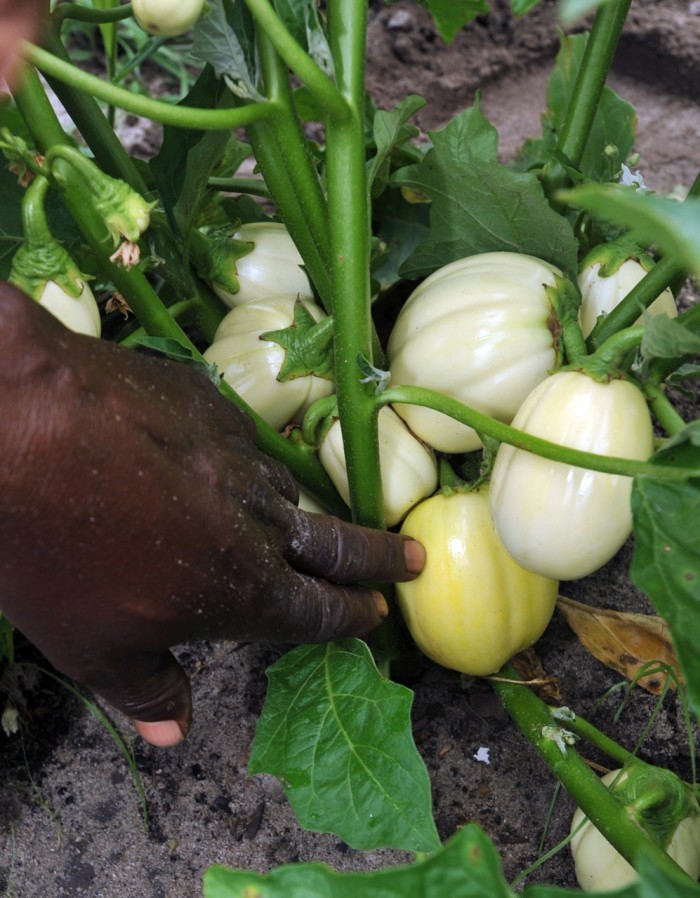 GALLOWAY TOWNSHIP - Morris Gbolo's farm officially opened for the season Thursday, his fields sitting 4,500 miles from where he learned to grow the West African crops he harvests now in South Jersey.

His Manheim Avenue fields bear produce foreign to the dirt and dinner plates of most people in America, but to the growing population of immigrants living here, the crops taste like home.

The Garden State already is a vegetable-producing powerhouse, but an increasingly diverse country has led local farmers such as Gbolo to plant a wider variety of crops aimed at specific ethnic groups. Some of the farmers are immigrants themselves who understand the need firsthand, while others are long-established growers looking to take advantage of niche markets.

People of Asian, Hispanic and African descent have driven population growth here and nationwide, and food producers have sought to supply their demand with items such as bok choy, bitter gourd, chili jalapeno and Malabar spinach.

"They want it, but they can't get it," Gbolo said. "We want to break that gap, give them what they want and make them happy."

To understand these markets, Rutgers University agricultural researchers have studied the eating and buying habits of different cultural groups to see how the small- and medium-sized farms in the state can improve their profits by growing crops sought by the under-served segments of the population.

A study undertaken by professors from Rutgers and other East Coast universities in 2006 - and presented last year in the Journal of the American Society of Farm Managers and Rural Appraisers - found "local producers can benefit by concentrating their efforts in producing ethnic vegetables and fresh produce and making these newer products available in the local and regional markets."

Surveys from 16 East Coast states, from Florida to Maine, found that Asian and Hispanic residents tend to spend more money each month on fresh fruits and vegetables than the national average, the study states.

The study also found that few purchasers of ethnic foods are willing to travel more than 20 miles to reach an ethnic store. Food quality and freshness followed by store selection and availability were easily the most important aspects for these buyers, far more than price, language of vendors and packaging.

That is a good thing for local farmers, since many of the traditional New Jersey crops, such as tomatoes, bell peppers, cucumbers and corn, have lower prices per weight on the market than the specialty crops that minority groups buy.

Professor Richard VanVranken, an agricultural agent with Rutgers Cooperative Extension of Atlantic County, worked on that last study and said they are currently analyzing data for a follow-up paper on the same subject.

He said he has used grants from the U.S. Department of Agriculture to help fund the study, as well as working with ethnic farmers throughout the region to improve their production and find connections with retailers and wholesalers to market their new products.

Meanwhile, vegetables originating outside North America have been planted by farmers in South Jersey for decades. Cilantro, which is known as coriander in much of the world, is a common crop today in Cumberland and Atlantic counties but is native to Africa, Asia and southern Europe.

John Formisano Sr. has been planting cilantro and a variety of other ethnic vegetables and herbs for longer than he can remember, with several acres of his 300-acre property in Buena planted with dill, basil and fenugreek.

They take their produce to auction in Vineland, where it is sold and transported to markets as far north as New York, Boston and Canada, as well as to Philadelphia and Washington, D.C.

A large portion of their cilantro and fenugreek, common ingredients in curries, goes to Edison, Middlesex County, a township of 100,000 people, about 43 percent of whom are Asian.

"I don't know how they use it all," Formisano said, "but they use it."

Farms such as Zhong Shan Farm in Hammonton and Evergreen Produce in Buena Vista Township are other local producers of foreign crops, specializing in Chinese greens such as bok choy, yu choy, Chinese broccoli and mustard green.

Locally grown products aimed at Hispanic communities, such jalapeno, poblano and Anaheim chili peppers, also commonly pass through the Vineland Produce Auction to be sold in South Jersey and along the East Coast.

And there are a few restaurants in the area that principally sell Jersey Fresh ethnic cuisine, such as Poteau African Village Restaurant on Tennessee Avenue in Atlantic City.

Gbolo's farm in Galloway is a pick-your-own farm, and people come from all over the region and from other states to get the hard-to-find vegetables he grows.

He began farming on a small plot in Egg Harbor Township, but, through VanVranken, got in contact with Art Brown, a former Rutgers professor who served as state secretary of Agriculture from 1982 through 2001. Brown agreed to let Gbolo grow his crops on Brown's Manheim Avenue farm, and they now manage about 10 acres of crops together. They call their joint effort Morris Gbolo's World Crops Farm at B&B Farms.

Bitter ball, a goose egg-sized white eggplant, is ready now to be picked, and in about two to three weeks they will have other African delicacies such as okra, Malabar spinach, roselle, jute leaves and habanero peppers, a favorite of Africans as well as Mexicans.

On Wednesday morning, Max Lamin, of Egg Harbor Township, another native of Liberia, was one of the first people in the fields to get his supply of fresh vegetables, which he said his wife would freeze so that they could enjoy them year-round when they are not available fresh.

He said it means a lot to have access to food from his home county. Before he had to drive hours to northern New Jersey to get the vegetables and herbs he desired.

Gbolo said he is also happy to again be growing the West African foods he learned to plant and harvest as a child, far away from the civil war that nearly took his life and the reality that all the farm work there had to be done by hand.

"I told him we're not doing anything if we can't use a machine," Brown said, smiling with Gbolo. "It's a lot easier with a machine, and he agrees."

Top New Jersey vegetables in 2010 by value of production

Farmers Morris Gbolo, left, and former state Secretary of Agriculture Art Brown, both of Galloway Township, stand in a field of bitterball eggplants Wednesday at their farm, B&B Farms, in the Pomona section of Galloway Township. The pick-your-own farm grows several African vegetables.