A heat wave that drives you to the shore, warm water temperature that draws you to the surf and a yellow flag “for moderate rip currents” that hints at danger, but doesn’t prevent you from swimming: These conditions can prove to be a dangerous, even deadly combination, according to research by the National Weather Service.

Most people know that rip currents, caused by breaks in the sandbar, can make swimming dangerous and require numerous lifeguard rescues during the summer.

But the National Weather Service, over the winter and spring, analyzed a number of other factors and found it is a mix of conditions that can lead to a drowning death where rip currents are a factor.

What they found was there are days when the risk of dying from rip currents in South Jersey are greater than others. It comes down to factors such as water temperature, time of day and how hot it is in Philadelphia. They are broken down into behavioral, measurable risk and demographic indicators.

“It’s what entices us to go in the water,” said Lance Franck, meteorologist for the National Weather Service in Mount Holly.

And why was Philadelphia chosen? Because it’s the largest city in NWS Mount Holly's coverage area and far enough from the ocean that it’s not subject to cooling sea breezes.

When it gets hot in the City of Brotherly Love, people flock to the beach.

But whether they’re at the beach or not, swimmers also prefer warm water. On average, the water temperature in Atlantic City is above 60 degrees from June 1 to Oct. 15, when most people are on the beach. Water temperatures above average may further entice people to hop on in.

Between 1998 and the end of September 2017, there were 47 rip current fatalities in the NWS Mount Holly’s coverage area, which includes the Atlantic coastal counties of Monmouth, Ocean, Atlantic and Cape May in New Jersey, as well as Sussex County in Delaware. Of those 47, 24 deaths were in Ocean (11), Atlantic (6) and Cape May (7) counties; 2017 was the deadliest year since the NWS began counting, with eight people dying.

Franck said those incidents were the only ones they could clearly attribute to rip currents.

“There could be more,” he said.

According to the study, the most common times for rip current fatalities are when air temperatures in Philadelphia are more than 3.1 degrees above average as well as when water temperatures are above 60 degrees (with a temperature anomaly of 2.5 degrees in Atlantic City, which was used as the focal point for the research).

Finally, when the rip current risk is moderate, as opposed, to high, they found the highest amount of rip current fatalities.

That may or may not be surprising, but as Franck pointed out, fewer people actually are swimming when the risk of rip currents are high — and the flags are red.

However, for a moderate risk of rip currents, associated with a yellow flag, shore beach patrols, “may have swimming restrictions, but may not also,” Franck said.

Randy Townsend, lifeguard captain for Harvey Cedars, backs up that assessment, although he believes most risks can be avoided if swimmers heed lifeguard warnings.

“The general public ... are very aware of the risks associated with these circumstances. However, you do have individuals who do not pay attention to the warnings and often wind up in a life-threatening situation,” he said.

The NWS research found other factors, including wave heights, the interval at which the waves pass, and wind direction are all factors.

Among their finds, rip currents presented the greatest threat when:

Waves were at least 2 feet high.

Wave intervals measured at the buoys, was 8 seconds or slower.

Winds were perpendicular to the land.

Franck said that the longer the wave period, “the greater the impact, because the waves have more strength to them.”

In addition, tropical systems, even if they are hundreds of miles away, can lead to longer periods swells and additional periods, which will also raise the rip current risk, Franck noted.

The data show swimming at a guarded beach is, in fact, the best way to avoid being overwhelmed by a rip current.

“The majority of fatalities occur at unguarded beaches,” Franck said.

Townsend said Harvey Cedars has taken these factors into account.

“Our agency has an after-hours program every day of the 11-week (third week in June to Labor Day Weekend) summer season. We have mobile units on patrol from 5 p.m. to 8 p.m. to assist the public with whatever they may need.”

To help beach patrols, the NWS this year began holding conference calls with lifeguard chiefs and captains up and down the Jersey Shore and on Delaware beaches.

This ‘boots on the ground’ method of listening and sharing ideas holds promise to save even more lives. Townsend said having direct access to the National Weather Service and its information is exciting news.

ATLANTIC CITY — Before Atlantic City students were let out of school for the summer last week, they got some tips about how to stay safe while…

After days of anticipation, the first heat wave of 2018 is upon us.

How did end of June, early July heat wave occur?

Buckle up, South Jersey — heat wave is coming our way

For the fifth consecutive year, Ocean City was named New Jersey’s Favorite Beach Friday as part of the annual contest by the New Jersey Sea Gr…

The hazy, hot and humid weather continues. A heat advisory remains in effect for parts of the region until 8 p.m. Monday. Meanwhile, an air qu…

The weather forecast for every 4th of July South Jersey event

Marissa Luca already has you covered on the hottest events in South Jersey for the 4th of July. Now, find out how hot it'll actually feel cele…

MARGATE — Lt. John Toland sat on the back porch of the city’s Beach Patrol headquarters at noon Tuesday and looked out at the crowd of people …

ATLANTIC CITY - Members of the city Beach Patrol pulled one adult and two juveniles from the water after dark on the July Fourth holiday.

Spot on summer weather through the week as Chris moves away

A new high-pressure system will recharge the region with seasonable sunshine and low humidity as Tropical Storm Chris moves out to sea.

A high-pressure system building from Atlantic Canada will be the weather player this weekend.

You can swim in the ocean, but yellow flags will stay the norm up and down the Jersey Shore through Saturday as meteorological conditions have…

Heat and humidity slowly build, but will any thunderstorms develop?

Two weekends ago, it was extremely hot. Last weekend was comfortably cool.

New Jersey is in a good place heading into the 2019 Affordable Care Act marketplace, experts say, but upheaval on the federal level is causing…

The current hot and humid air mass will feel like a distant memory by the time we reach the end of the it. It’ll just take one sweeping cold f…

OCEAN CITY — As a certified EMT, Brian Wheelock is used to dealing with tragedy. But a recent event during a family vacation to the beach shoo…

The National Weather Service in Mount Holly has issued a rip current statement for the beaches on Tuesday. A small craft advisory is also in e…

Watch out, swimmers, dangerous rip currents will crash through the Jersey Shore on Wednesday.

Ocean City lifeguards save toddler who stopped breathing on beach

OCEAN CITY — For Ocean City lifeguard Colt Lacovara, Tuesday was a typical day on the Eighth Street beach, until just after 3 p.m.

12:15 p.m. update: The statement has now been dropped. A moderate risk of rip currents is in place.

Expect to see many red flags out along the Jersey Shore on Wednesday.

SEA ISLE CITY — An off-duty state trooper vacationing in the city earlier this month rescued a man who was drowning in the ocean.

As summer winds down, Ocean City Beach Patrol will be reducing its guarded beaches after Labor Day, the city announced.

Seasonable late summer weather and water temperatures in the 70s make it tempting to get in the water. However, stay on the sand, as life thre…

New York man dies after drowning off Cape May beach

Out on the water, rip current and high surf alerts

Do not swim in the waters and small boats should be kept docked Tuesday and Wednesday.

The thermometer will climb in South Jersey, but the cloud cover prevalent for much of the holiday weekend will remain. Just as temperatures wa…

ATLANTIC CITY — As the resort reopens amid the COVID-19 pandemic, the city’s Beach Patrol chief urged residents and visitors Friday to swim on…

A rip current is clearly visible from the shore, out to sea, in this Wednesday time lapse in Harvey Cedars by Beach Patrol Chief Randy Townsen…

A closer look at: rip currents

A high risk of dangerous rip currents will be likely Friday.

There are three scenarios at play

There are three options at play. However, it will not be until Saturday when they can be narrowed down. If the storm makes landfall before rea…

Paulette continues to move further and further away from New Jersey, but it continues to bring dangerous rip currents to the waters Wednesday. 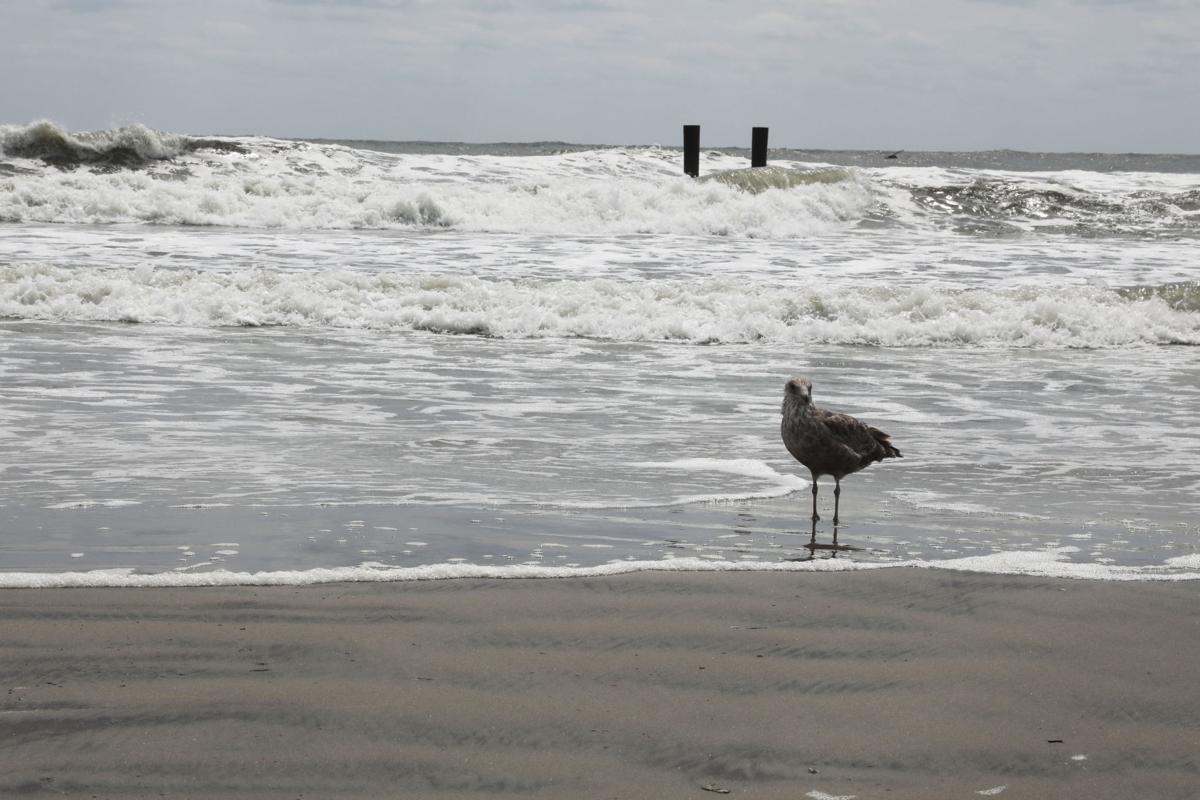 Beachgoers are limited to knee-to-waist depth in the ocean off of Atlantic City beaches due to rip currents and high waves. The restrictions are expected to carry through tomorrow depending on the weather. Beach patrol on duty were busy making sure those who braved the waters were at safe depths. 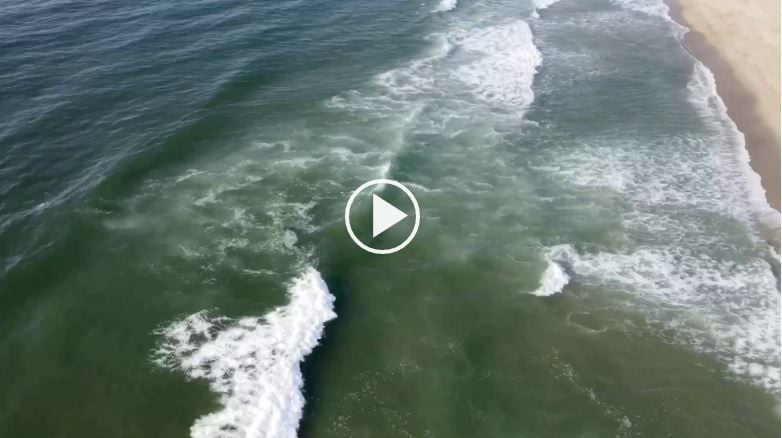