In a landscape as sensitive to coastal flooding as South Jersey, residents can mark a once a year phenomenon on their calendars for likely tidal flooding.

The "king tide" or the highest tide of the year, will occur Sunday for the tidal stations in Atlantic City and Cape May. For many locations along the Atlantic coasts, they happen over the weekend. The king tide almost always happens during September or october.

To have a king tide, there are four factors at play, involving a combination of factors.

In South Jersey, Atlantic Ocean high tides are within a half hour of each other. However, ba…

King tides occur when the moon near full or new moon phase. Due to the gravitational pull between the earth and moon, the tides are highest at these times. The new moon is Oct. 16 in 2020.

The moon also has to be especially close to the earth, which is known as "perigee". The moon orbits not in the circle but in an elliptical pattern, so the moon can be closer to the earth at different times than others. These two factors alone are called a "perigean spring tide". The Ash Wednesday storm of 1962 was during this time. This kind of tide happens six to times a year, on average.

Taking it a step further, the king tide has the earth closer to both the moon and the sun. The earth also revolves around the sun is a slightly non circular fashion. At its closest, it's called "perihelion", which is typically in January. This happens twice annually - during the spring, and within the fall. Both tides are considered king tides. However, the one in the fall is slightly higher than the spring one, making it the ultimate king tide.

The reason being is that water temperatures during the fall are warmer than during the spring. Just as warm air expands so, too, does warm water. Therefore, the weekend tide is actually the highest naturally occurring tide of the year.

King tides are a good indicator of what future tides levels will be due to climate change.

“We think of king tides as a way for people to get a look at future flooding that will be caused by sea-level rise,” Lisa Auermuller, assistant manager at the Rutgers-administered Jacques Cousteau National Estuarine Research Reserve, said.

ClimateCentral, a non-profit organization in Princeton, New Jersey, took a look at coastal flooding in an average year at 30 United States wide locations. The number of cumulative flood days have risen from only about a hundred in the 1980s, to a couple hundred in the 2010s. By the 2070s, about 9,000 cumulative flood days will be expected in an average year.

Coastal flooding will always be a concern, and that concern has steadily increased in recent…

A weak cold front passed through Friday night without much more than a change in the wind direction. So, sunshine and low dew points will cont…

September start sunny in South Jersey, but how long will it last?

Many people tell me how much they love September weather — the warm, but not oppressive days with plenty of sun.

The U.S. Small Business Administration will accept disaster loan applications for up to $2 million from businesses of all sizes and private no…

Thursday will be a bright, warm, almost stick-your-feet-in-the-sand kind of day in the region. Clouds will build in after, though, ahead of a …

Weather: Over an inch of rain for some Friday, dry, crisp weekend ahead

A low-pressure system will ride along a stalled-out front, bringing showers and periods of rain Friday, mainly during the afternoon and evenin… 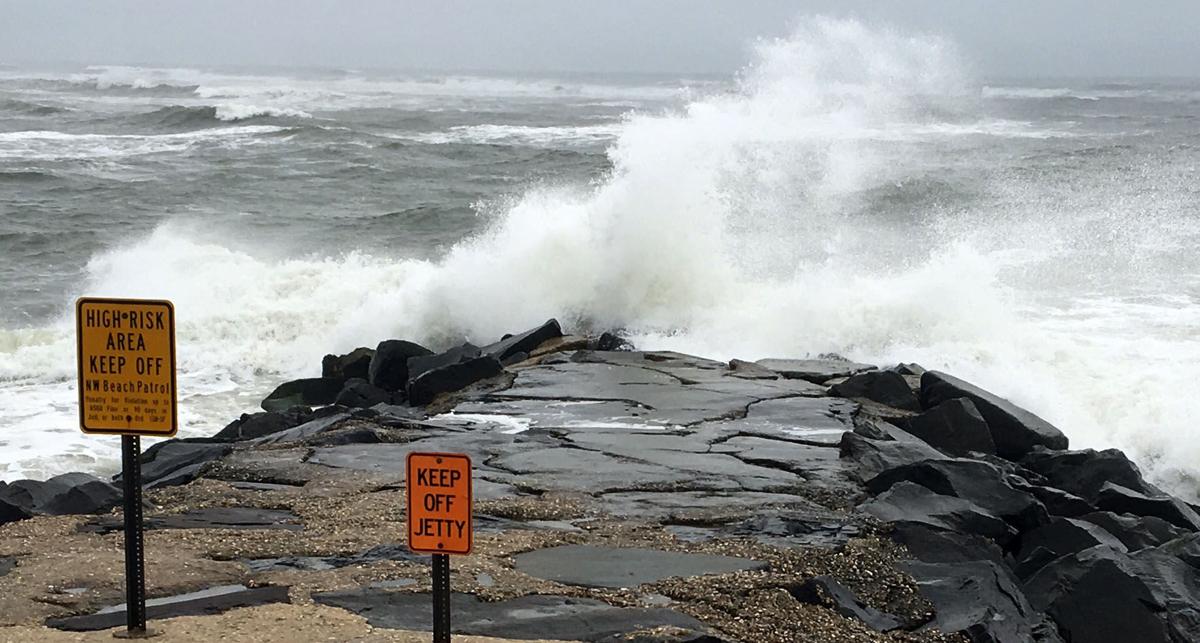 Strong waves crash the jetty at 2nd Avenue and JFK in North Wildwood, as Hurricane Maria looms off the coast raking the South Jersey shoreline with rough surf.

The position of the Sun, Moon and Earth determine whether it is a neap tide, a period of moderate tides, or a spring tide. A king tide is a type of spring tide, where the Moon is between the Earth and the Sun. The spring tide is not named after the season.