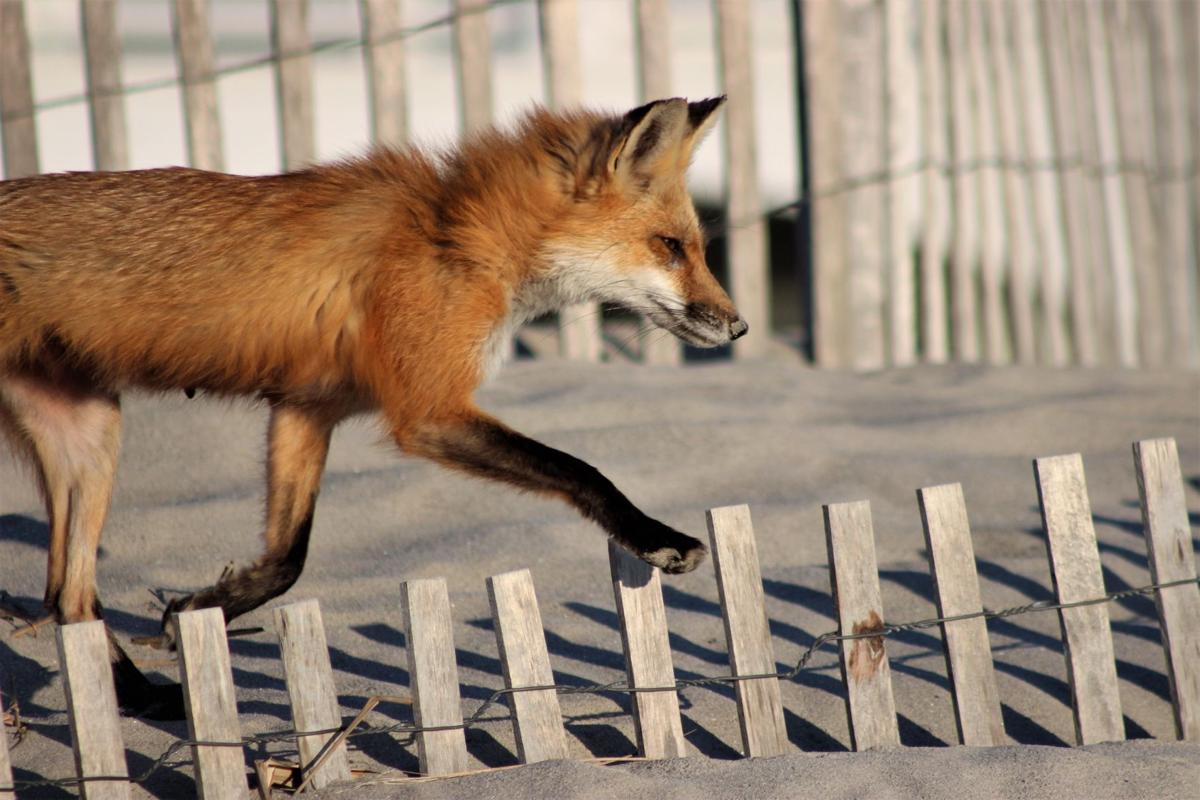 A healthy fox makes its way along the dunes in Ocean City. 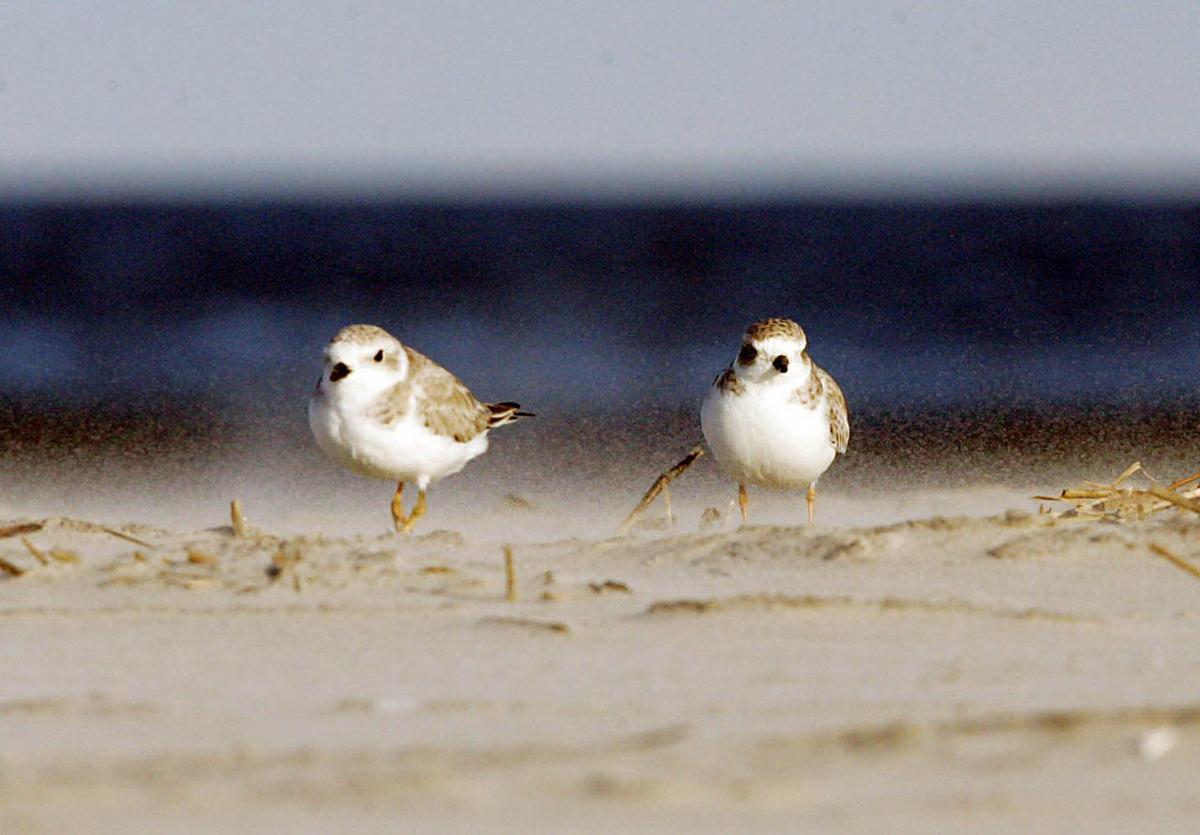 One late April day, a Stone Harbor resident posted a photo online of a dead red fox in a snare trap at Stone Harbor Point, a quiet conservation area at the southern tip of Seven Mile Island.

The picture quickly grabbed the attention of the small shore community, where the state has been capturing and euthanizing foxes to protect endangered piping plovers nesting there from predation. Now, some are questioning whether the use of snares is humane.

“The thought of an animal struggling in a trap for 12 or 14 hours, I have a problem with it,” Stone Harbor Mayor Judy Davies-Dunhour said. “I understand the ecosystem needs to be preserved. ... But isn’t there a more humane way?”

The New Jersey Department of Environmental Protection did not respond to a request for comment.

Piping plovers, tiny, sandy-colored birds, dig shallow nests near sand dunes and walk to the shoreline to feed. They are declining in numbers across the state and Stone Harbor, where there were 15 pairs in 2009 and below five in 2018, according to the New Jersey Division of Fish and Wildlife. Of 34 nest failures in the state last year, foxes were behind at least seven — more than any other mammal. One or more American minks, opossums, crows, gulls and owls also destroyed nests.

The mayor said she has long been aware of predator control at Stone Harbor Point, but did not know until recently about the use of snare traps. In its 2008 Conservation Plan, Stone Harbor said it would work with the state to trap and relocate predators like red foxes, but DEP guidelines say relocation must be within two miles of the capture site. Stone Harbor is a little over one-square mile, and largely developed.

The state alerts the borough before setting up traps, the last time being mid-May, Davies-Dunhour said. It’s unclear how many red foxes live at the Point or how many have been euthanized.

A handful of animal rights activists have been outspoken at council meetings, urging the borough to persuade the state to either relocate the animals instead or use pain-free “box traps.” The mayor backs those ideas, while other council members want additional information from the DEP.

The borough is now asking state and federal representatives to give a presentation at a work session about why snare traps are used and whether alternatives exist.

“It’s heartbreaking,” said Debbie Parkinson, a Stone Harbor resident who sees the state prioritizing one species over another. “There’s more money in birds than foxes.”

Ron Soldano, of Ocean View, voiced concerns at Tuesday’s council meeting that state wildlife officials are tampering with the environment.

Piping plover numbers have plummeted in Cape May County over the past two decades by 93%, and this year, Avalon was lost as a nesting spot. Development and habitat loss from storms also affect the population.

“I have a problem with killing those mammals,” he said. “Natural selection allows for wildlife to find its path.”

Commercial trapping of red foxes is legal in New Jersey, though a bill in the state Legislature in 2018 sought to ban the sale and manufacturing of snare traps.

The controversial wildlife management plan is also used 45 miles to the north in Brigantine, where a petition in April 2018 against the strategy garnered over 100,000 signatures and media attention.

About 40 to 50 red foxes were brought to the island years ago to manage the rodent population, Councilman Vince Sera said, but the Public Works Department estimates there are only 10 left.

It’s been a highly emotional topic for the shore town, where foxes are the “unofficial mascot.” Sera said some residents have been fined thousands of dollars over the past year for cutting the cables on snare traps on the northern end of the island to make them nonoperational.

Now, the borough is working to draft a management proposal to present to the DEP looking at ways to protect both species. The state has said it already sets up fencing around plover nests for extra protection from predators, but foxes can dig under those barriers.

Sera said he is sympathetic to plovers too. The North Brigantine Natural Area once hosted 17 pairs at its peak in 2003, but now has only two pairs, according to a 2018 state report.

“I understand it’s a delicate balance,” Sera said. “We’re trying to put together a plan on how to protect piping plovers and foxes.”

These birds are taking over a Stone Harbor marsh, and NJ biologists are worried

'It's been horrible': Big surge in turtle deaths on Jersey Shore roads this year

With a shovel in one hand and a rake in the other, Jeneen Spano scraped up a shattered diamo…

Which Jersey Shore fishers will be hurt most by climate change?

NJ ended its horseshoe crab harvest. Should other states do the same?

AVALON — A judge on Monday set the trial date for Elaine Scattergood, a resident the borough has taken to court over the length of the ivy on …

STONE HARBOR — Waves crashing behind him, a drenched rooster named Bluff flapped his wings and dried off on the 92nd Street beach.

Nothing natural about destruction of NJ beach nesting birds

The residents and officials of Stone Harbor are the latest shore community to grapple with conflicting feelings about wildlife.

More piping plover pairs nested in New Jersey this year — 114 compared with 98 last year — with an average of 1.24 young per nest reaching ind…

There is some good news for a state-endangered plant that grows in ocean beach sand and was once thought lost to New Jersey.