Subscribe
Read Today's E-Edition
Share This
'Things are looking up': These adults have earned their high school diploma years after dropping out
0 Comments
Share this
1 of 2 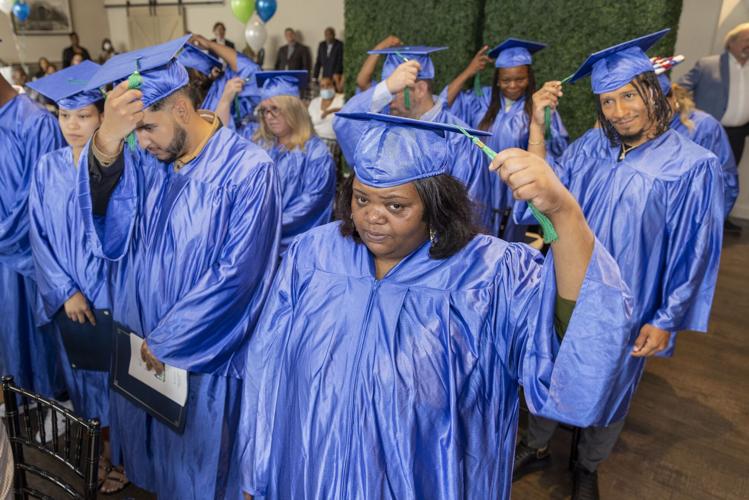 Naché Grant, 34, of Philadelphia, leads her classmates with the ceremonial turning of the tassels. They received high school diplomas at Goodwill’s Helms Academy graduation ceremony Thursday at the Camden County Boathouse in Pennsauken. 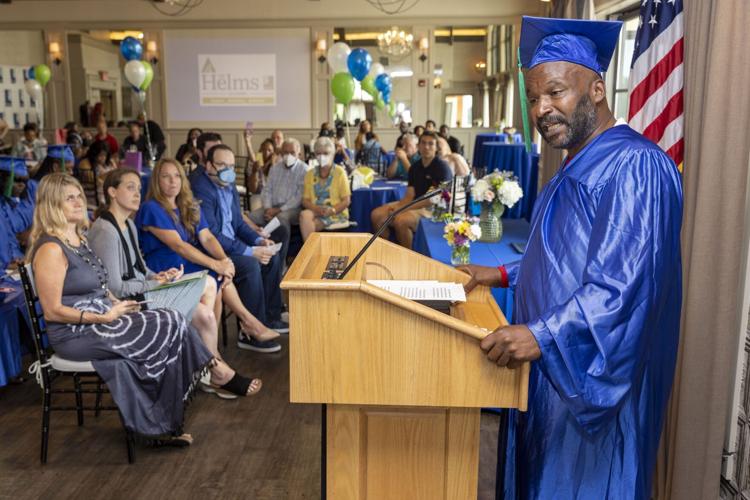 After dropping out of Camden’s Woodrow Wilson High School at age 16 to help his single mother raise his three younger siblings, Kevin Dorman doubted he would ever get another chance to graduate.

More than three decades later, Dorman, 52, donned a blue cap and gown and picked up his high school diploma Thursday from Goodwill’s Helms Academy during a ceremony on the Cooper River at the Camden County Boathouse. He gave one of the commencement addresses.

“Things are looking up,” said Dorman, of Camden. “I did it!”

Currently unemployed, he plans to continue his education and become a medical assistant.

Almost three dozen students from South Jersey and Philadelphia graduated from the program sponsored by Goodwill to help older students obtain their high school diploma, which they earned either by passing a test or completing 30 college credits. Goodwill uses sales from donations at its retail stores to pay for the program.

Like Dorman, the graduates left high school for personal reasons, hoping to possibly return later. Some said they dropped out when they became teen mothers, or they had financial problems or were expelled for bad behavior.

“I do regret it,” admitted Danielle Day, 32, of Philadelphia. “Now, look what I’ve done. I’m very proud of myself.”

Day said peer pressure pushed her to drop out of Overbrook High School when she was 16. She said she wanted to get her diploma to show her three children, “If I can do it, you can do it, too.”

“It always seems impossible ‘til it’s done,” she said.

Named for Goodwill founder Edgar Helms, the academy provides free tuition to adults 18 and older, as well as basic skills training and tutoring. Students can attend classes virtually or at locations in Philadelphia and Stratford, Maple Shade and Toms River, New Jersey.

“To be able to give them a second chance is an amazing opportunity,” said Mark Boyd, Goodwill’s president and CEO. “The courage, conviction and discipline it takes to go back and complete that degree is truly inspiring.”

Aspiring nurse Monica McDuffie, 36, of Philadelphia, said she decided to pursue getting a diploma after her son, Zymere, threatened to drop out. She left school in 2002 when she was pregnant with him.

“Everyone has a motivation, and mine was to stop history from repeating itself and show my children that giving up is not an option,” McDuffie said. Her son, now 20, graduated last year, and she plans to continue her education at community college.

In 2019, there were 2 million high school dropouts between the ages of 16 and 24, according to the National Center for Education Statistics. They are more likely to be unemployed, have low-paying jobs or land in jail, experts say.

“It really limited me,” said David Huesken, 43, of Palmyra, a warehouse worker for 17 years. “Every job I saw said high school diploma required.”

Huesken enrolled in the Helms academy after encouraging his daughter, Tiana, 22, who dropped out in the 11th grade, to try the program. She earned her diploma last year and participated in Thursday’s ceremony because hers was canceled due to COVID-19.

“It feels amazing,” said Hueske, who hopes to pursue a bachelor’s degree. “I never thought I would see this day, never in a million years.”

With family and friends packed into a second-floor ballroom, the graduates nervously marched inside as “Pomp and Circumstance” played on a speaker. Every graduate received a laptop donated by Comcast.

“I’m so proud of myself that I didn’t quit,” said Trudy “Moe” Brown, 32, of Philadelphia, a security officer. “I applied all of my failures to get me to my successes.”

Brown said she left Germantown High School when she was 16 to look after her seven younger siblings. She said she landed in jail in 2010 for selling drugs and suffered bouts of homelessness. She had to put school on the back burner.

“I never graduated from anything,” she said. “I had to show I can do something other than being out on the streets.”

Brown said she plans to get a commercial driver’s license and become a truck driver.

Some of the graduates skipped the ceremony, officials said, embarrassed to publicly acknowledge that they had not received a high school diploma until now. Others like Shavonna Henderson, 30, of Sicklerville, were applauded for sharing personal testimonials about overcoming obstacles.

Henderson said she was expelled from Timber Creek High School in 2011 for bad behavior. She was eventually diagnosed as bipolar, she said.

After enrolling in the Goodwill program, Henderson opted to seek college credits. She recently graduated from Camden County College and ultimately plans to seek a doctorate in psychology and establish her own psychology practice.

“Here I am today to tell you nothing is impossible,” Henderson, a mental health associate, told her classmates. “Success has no age limits.”

After suffering a spinal cord injury when she was 17, Erica Moran, 31, of Philadelphia, withdrew from Kensington High School. Her medical problems left her “too depressed and negative to do anything positive” like return to school, she said.

Moran enrolled in the Helms program in 2021. On Thursday, she was named “Adult Learner of the Year,” cheered on as she navigated her wheelchair to receive the award.

Moran said she wants to motivate others to pursue their dreams. She plans to attend college and possibly study computers or coding.

“I’m just trying to prosper. I want to do something with my life,” she said. “I want to inspire other people who they think they can’t do it.”

Woman in $400K GoFundMe scam gets 1 year in federal case

A woman who admitted her role in a scam that raised $400,000 using a fake story about a homeless man has been sentenced in federal court. A New Jersey judge sentenced Katelyn McClure Thursday to a prison term of one year and one day. McClure and her then-boyfriend Mark D’Amico fabricated the story that homeless veteran Johnny Bobbitt, Jr., rescued her from the side of a Philadelphia highway in 2017. They publicized their story and more than 14,000 people donated, thinking the money was for Bobbitt. Prosecutors say the pair instead spent the money on luxury items and travel. McClure also pleaded guilty to state charges in 2019 and faces sentencing next month.

Naché Grant, 34, of Philadelphia, leads her classmates with the ceremonial turning of the tassels. They received high school diplomas at Goodwill’s Helms Academy graduation ceremony Thursday at the Camden County Boathouse in Pennsauken.