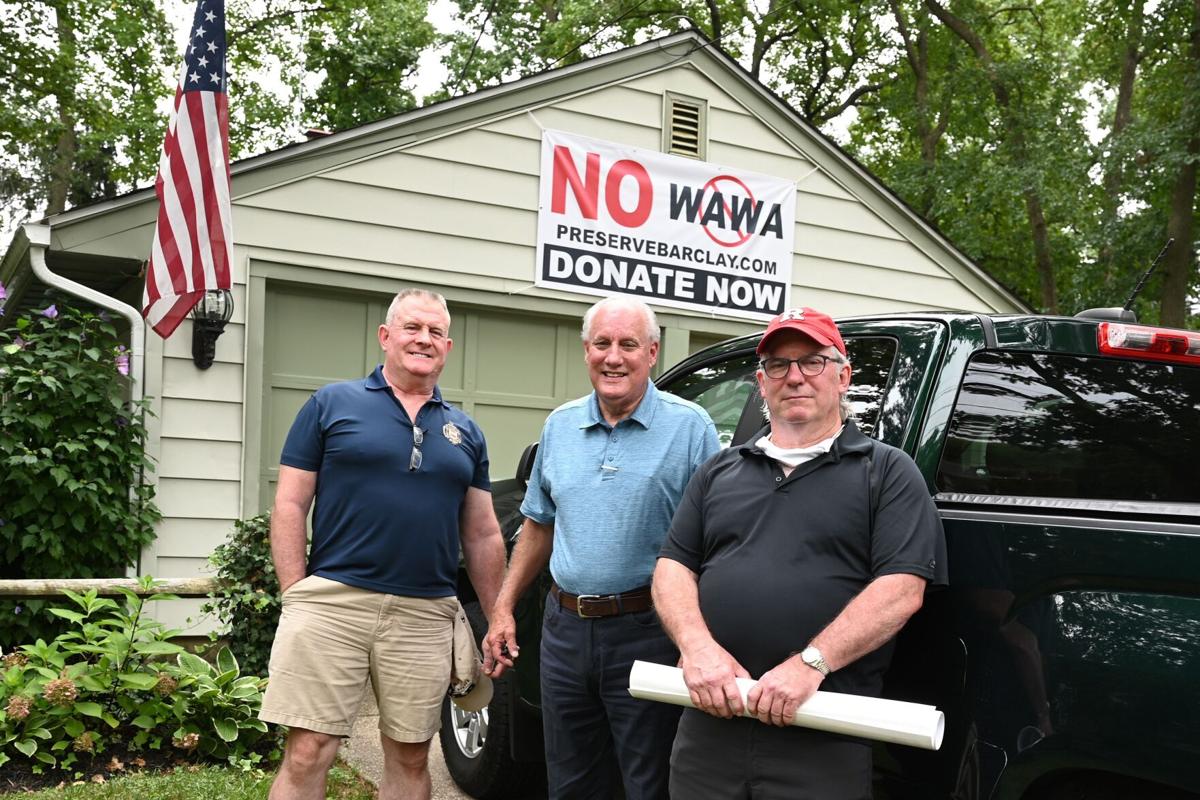 Cherry Hill residents Steve Walsh, left, Wes Hughes and Bruce Sizer gather in front of Hughes’ garage in the Barclay Farms neighborhood of Cherry Hill near the site of a proposed “super” Wawa. 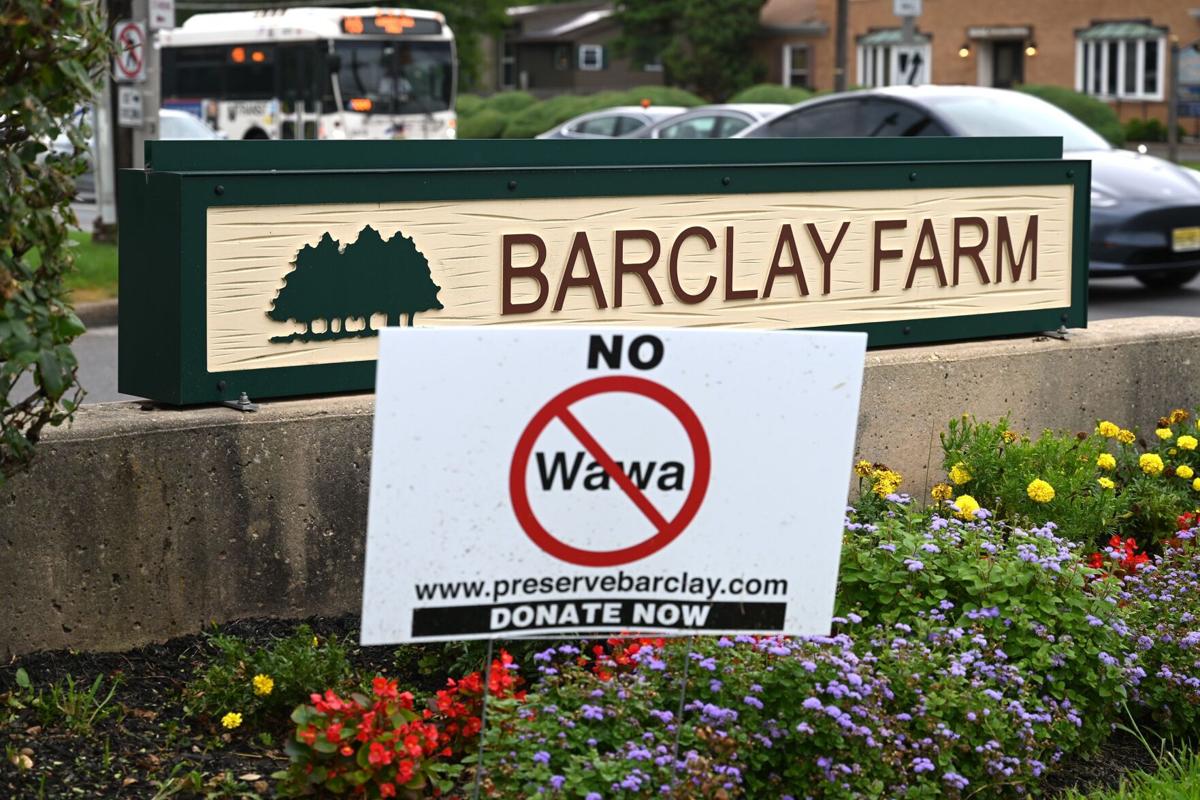 Residents of the Barclay Farm section of Cherry Hill are concerned about a proposal to build a super Wawa, with gas pumps, on part of the Barclay Farms Shopping Center adjacent to the their residential streets. They also want to preserve the medians at the entrance to their neighborhood.

When Robert K. Scarborough began to build his Barclay Farm development in the mid-1950s, much of Cherry Hill was still agricultural, and Wawa was a family-owned dairy business in Delaware County, Pennsylvania.

The company has evolved into a convenience store and gas station empire by methodically expanding its footprint in the Philadelphia region and along the East Coast. And Barclay Farm has long been a desirable neighborhood in the densely developed suburban township of about 71,000 people.

But in a region that really does love Wawa, Barclay Farm and nearby Kingston Estates are among the latest communities saying no to one of the chain’s proposed outlets. A similar fight is underway in the Holland section of Northampton Township, Bucks County, and in 2020, the Philadelphia zoning board rejected a Wawa-with-gas proposed near the Delaware River Waterfront in South Philly.

“We don’t need another Wawa in Cherry Hill. We want to maintain the community we have here, and a Wawa would create a whole different atmosphere,” said Carol Saldutti, a certified public accountant who has lived in Barclay since 1992. There are six Wawas in the township, and many more near its borders.

Saldutti is one of the leaders of the “Preserve Barclay” campaign against the proposal — in the works since 2019 — to redevelop a portion of the Barclay Farms Shopping Center on Route 70 with a 24-hour Wawa store and gas station with 16 fueling stations as a new centerpiece. The application for site plan approval was filed last spring with the Cherry Hill Planning Board.

Although the board has yet to schedule a hearing on the matter, opponents have hired a lawyer and have been meeting regularly, raising money, pressuring elected officials and distributing an assortment of the “no Wawa” signs sprouting up across Barclay. They regard 24/7 hoagies, fast fill-ups and landscaping improvements as insufficient compensation for the additional traffic, noise, light pollution and other issues they expect to arise from the project.

A prolific public official, McKernan was Camden’s city attorney from 1974-79, and served for…

Steve Walsh, who grew up in Barclay, lives in his childhood home (“I bought it from my dad”) and hopes to pass the house along to his son, said the proposed Wawa “will destroy the character and decrease the property values of the neighborhood. And the list goes on.”

With two swim clubs, a historic farmhouse, a community garden and even a covered bridge, Barclay Farm retains a distinctive sense of place. It has remained somewhat insulated from the redevelopment-driven commercial encroachment facing other attractive midcentury neighborhoods on Cherry Hill’s west side, such as Kingston and Erlton.

“We are concerned about the multifaceted degradation of the quality of the communities and the lives of residents living in ... Barclay Farm and Kingston,” the executive board of the Greater Kingston Civic Association said in a statement. The two neighborhoods each have about 1,800 homes.

“We’re proud of our neighborhood, we care about our neighborhood, and this just feels disrespectful,” said board member Yolanda Lorenz, who has lived in Kingston for 37 years. “You need to really consider the residents if you want your town to remain vibrant.”

The success of earlier campaigns against unwanted development proposals in the Kingston-Barclay area, such as a new town hall on Kings Highway in 2016, a freestanding fast-food restaurant at the shopping center in 1993 and an adults-only “Romantic Video and Boutique” emporium on Route 70 in 2006, may be difficult to duplicate.

Wawa is known for doing its site selection homework, and the company has prevailed over the opposition of Cherry Hill residents near the two convenience store-gas stations it has constructed on Haddonfield Road since 2012. It also won approval over local resistance for a store and gas pumps in Mount Laurel last December.

Wawa’s Barclay store and station is proposed for a section of the center’s parking lot close to Route 70 and east of Westgate Drive, where commercial development is allowed. The site plan calls for demolition of a pet store (formerly a movie theater) and the Barclay Pavilion office building on the west side of the shopping center. A Westgate Drive house used as a medical office also would be razed to make way for a new entrance and exit for patrons of Wawa and other businesses.

Officials at Wawa and at the Kaiserman Co., the Philadelphia real estate firm that owns the shopping center, declined to answer questions about the proposal.

Some opponents researched property records and discovered restrictions in a 1956 deed they believe don’t allow construction of a gas station at the shopping center. A story on the local news website 70and73.com last month quoted a letter by a lawyer for a Kaiserman-related company insisting the prohibition of oil drilling there is irrelevant to the site plan application.

Cherry Hill Township Council President David Fleisher has notified the New Jersey Department of Transportation about concerns regarding changes Wawa wants to make to the Westgate Drive entrance of Barclay Farm and the Kingston Drive entrance to Kingston. These two signature gateways are directly across Route 70 from each other, and together with the state highway, already create a chronically traffic-clogged intersection.

In an Aug. 18 letter to the DOT’s Office of Major Access Permits, Fleisher said Cherry Hill objects to the removal or alteration of the “median islands” at both entrances, calling them “representative of the character and charm ... of these neighborhoods with well-maintained homes and quaint, tree-lined streets.”

The council was scheduled to vote on a resolution expressing opposition to removing or modifying the medians at the Route 70 entrances to Barclay, as well as Kingston, on Monday. Separately, in a statement, Mayor Susan Shin Angulo encouraged residents “to continue to make their voices heard including (by) the Planning Board.”

A word common to Arabic, Persian and Urdu — three of the languages Muqqadas Ejaz speaks in a…

John Andraka, an entertainment production manager, bought his house on Westgate Drive eight years ago. By email, he said he was shocked to learn the adjacent house could be “demolished and paved with an access road just feet from my home in an effort to accommodate the increased traffic to and from a business that operates 24 hours a day, seven days a week.”

“I never imagined that this kind of imposition could even be entertained when I bought my home here in Cherry Hill,” he said.

A Preserve Barclay meeting in the basement of Trinity Presbyterian Church on Aug. 31 drew about 35 people. There were many questions about how to block the Wawa project and much discussion about how best to spread the “No Wawa” message through signs, social media, and letters to news outlets and elected officials.

Martha Wright, who lives in the Hunt Tract neighborhood adjacent to Barclay, urged the audience to consider testifying against the proposal when the Planning Board schedules a public hearing, likely this fall. She said the Wawa proposal is “contrary to the township’s Sustainability Road Map” as well as the “legal basis of zoning” as described on the township’s website.

During an interview, Wright also noted that a gas station is a “conditional” allowable use in a commercial zone.

“It’s not automatically allowed,” she said. “An argument could be made in favor of a conditional use in an area where gas stations or convenience stores weren’t available. But Barclay has ample access to those already.”

The lawsuit was filed on behalf of Suze DiPietro by Dennis C. Schmieder of the law offices o…

Wright, who was born and raised in the township, also said opponents recognize that Cherry Hill is evolving and “are not interested in clinging to the past.”

Scarborough, a respected builder who died in 2011, filled Barclay with variations on the “Colonial” style houses popular in the ‘50s and ‘60s, and the shopping center evoked a country village, with barnlike buildings and rustic details.

What matters in the battle over Wawa is not nostalgia, Wright said, but the community’s sustainability.

“What kind of future is there in a gas station?”

Loud music is keeping South Jersey and Philly's riverfront neighborhoods up late. They blame each other.

Late last year, residents of Fishtown and Port Richmond began complaining about music flooding their homes at night. “Where is this awful musi…

Secondary home at the shore

Cherry Hill couple Rose Anne and Andy Noll discuss why they shown Ocean City as the location for their second home at the shore.

Cherry Hill residents Steve Walsh, left, Wes Hughes and Bruce Sizer gather in front of Hughes’ garage in the Barclay Farms neighborhood of Cherry Hill near the site of a proposed “super” Wawa.

Residents of the Barclay Farm section of Cherry Hill are concerned about a proposal to build a super Wawa, with gas pumps, on part of the Barclay Farms Shopping Center adjacent to the their residential streets. They also want to preserve the medians at the entrance to their neighborhood.