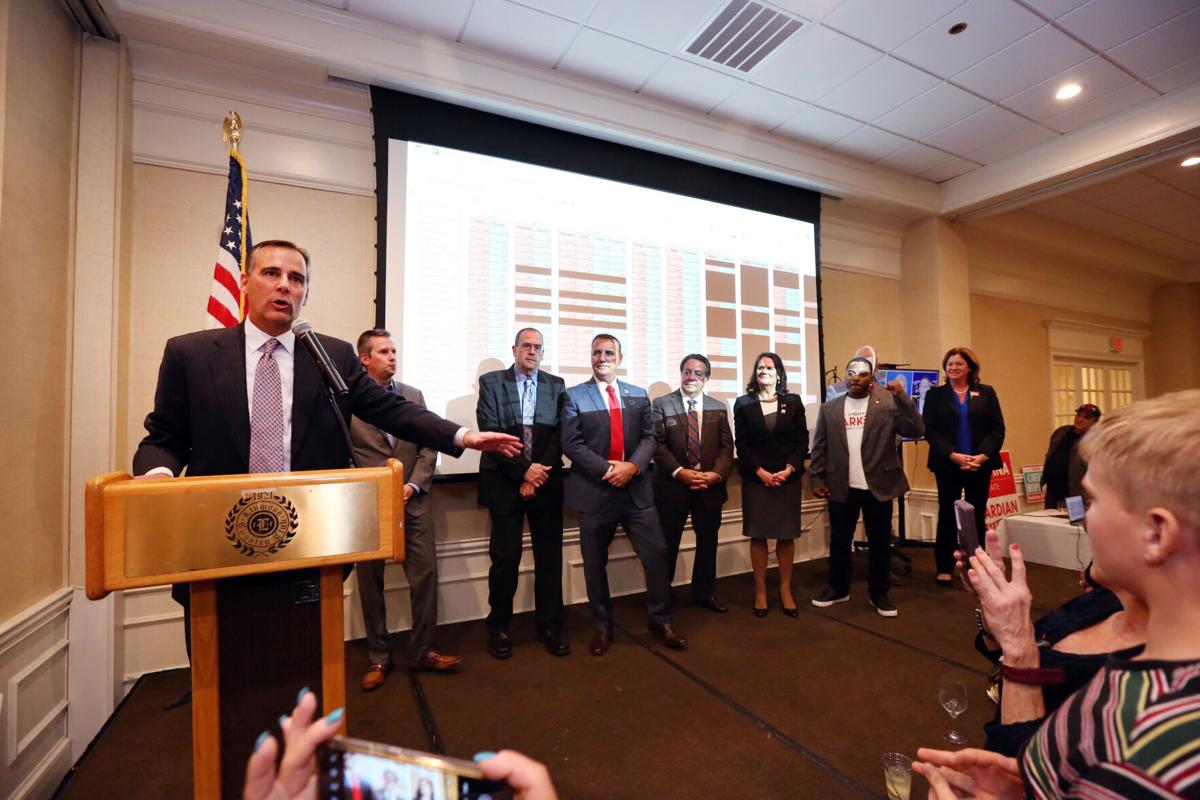 Republican state Sen.-select Vince Polistina celebrates his victory and those of his down-ticket colleagues on election night at Linwood Country Club.

State Senate President Steve Sweeney was swept out of office on Election Day in favor of Republican newcomer Edward Durr. 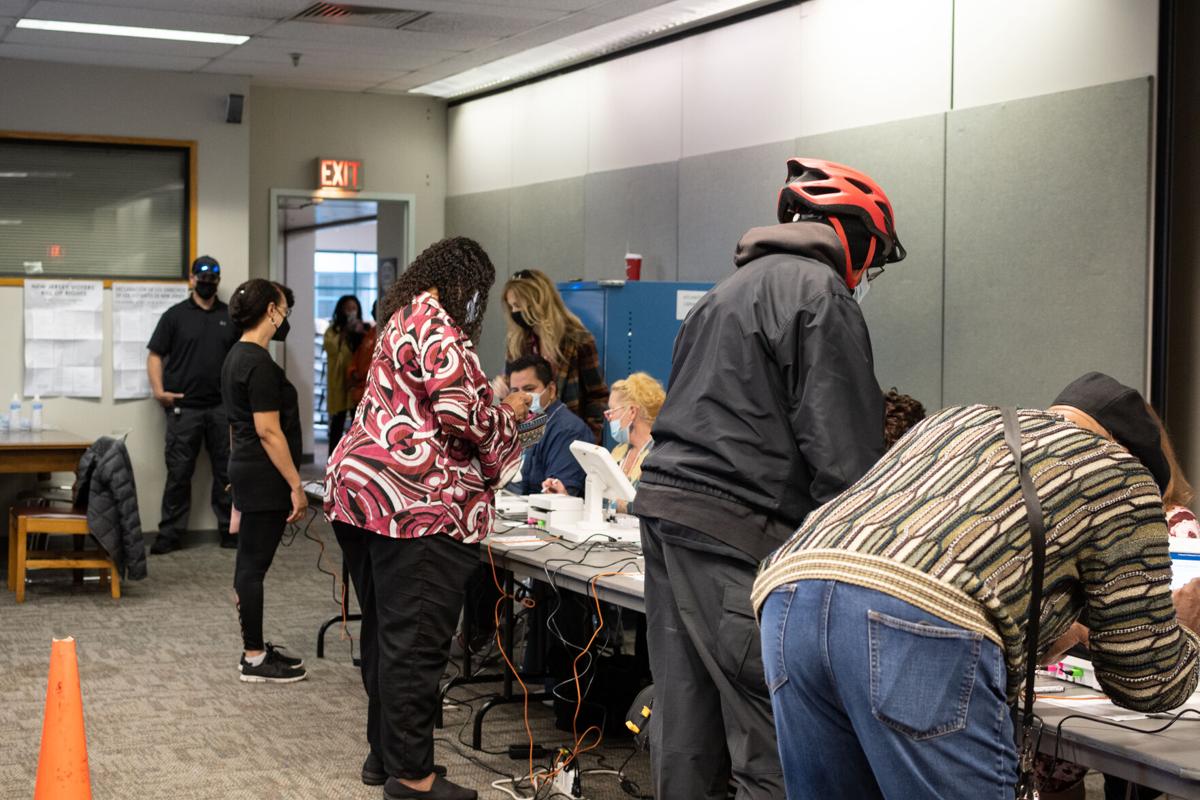 As soon as the doors opened on the first day of early voting, people streamed in to the second floor of the Atlantic City Free Public Library on Oct. 23. Most voters said the new process on high-tech machines was easy and convenient.

In a year full of political upsets, head-scratching decisions and momentous changes in the way elections are run , some events still stand out as the highlights of 2021.

“To me, the biggest story of the year was the red wave of the election. Very few people expected it,” said John Froonjian, executive director of the William J. Hughes Center for Public Policy at Stockton University.

Overall, Republicans picked up six seats in the Assembly and one in the state Senate, with the most gains in South Jersey, giving the GOP a path out of the New Jersey political wilderness after many years, Froonjian said.

The wave swept even powerful state Senate President Steve Sweeney, D-Salem, Gloucester, Cumberland, out of office. Defeating him was truck driver Edward Durr, of Logan Township, Gloucester County, who has run for office before but never gotten a major party nomination or won a race.

“I think the most important thing, really, is they recaptured the suburbs that had been gong to Democrats for a few years, especially in rejecting Donald Trump,” Froonjian said. “Was this a one-time reversion, or are they going back to the Republicans? — in which case that would be big trouble for the Democrats.”

For the past 15 years, the highly competitive 2nd legislative district has sent a mix of Rep…

The 2nd District 2021 race is now the fifth costliest in New Jersey history, with $7.7 million spent, according to the state Election Law Enforcement Commission.

Froonjian cited the gubernatorial races in New Jersey and Virginia, in which Republicans did much better than expected, as another major story.

“Murphy is one of most liberal governors in the country. His small margin reflects the difficulty he will have in his second term to enact progressive liberal policies,” Froonjian said. “So the key word in Trenton right now is affordability. It’s never good when the key term in the capitol (under a Democratic administration) is set by a Republican.”

Hammonton Councilman Joe Giralo will be the next Atlantic County clerk, after getting 67% of…

The year started with Republican state Sen. Chris Brown, R-Atlantic, resigning to take a job advising Murphy on Atlantic City. Since Brown’s reelection was highly likely, the move flummoxed most people, but Brown said he wanted to enjoy his life more as he got older. He also sold his law practice.

The unusual move poured gasoline on an already hotly contested battleground race in the 2nd District.

A future for polls?

A third major story this year was the failure by pollsters to accurately predict results in New Jersey, Froonjian said.

Small percentage of voters used early voting, but officials expect it to grow

About 3.5% of Atlantic County registered voters and 4.6% of those in Cape May County opted t…

“Every major academic and independent public poll really blew it and overstated Murphy’s majority,” Froonjian said. “Polls have to solve the problem of Republicans refusing to participate or there is no future in political polls.”

A Stockton University poll released in September showed likely voters favoring Murphy over Ciattarelli by nine percentage points. In fact, the results election night were too tight to call, and Ciattarelli ended up behind by just 74,000 votes, or three points.

Froonjian said one possibility is to give up on the telephone poll — traditionally the gold standard because it is so random — and instead use panels of people who sign up to participate.

Sweeney’s loss was the shocker of the year, Froonjian said, followed by the predictable announcement that he is considering a run for governor in 2025.

“I don’t think this loss disqualifies him,” Froonjian said. “He’d rather be Senate president ... but it does free him up to continue laying out a rationale for a run he began doing in his Path to Progress town halls.”

“Now he has the opportunity to continue in that vein, being an outsider who is free to criticize whatever,” Froonjian said, and without having to defend his party’s more progressive leanings.

“Many New Jersey Democrats are not real liberal,” Froonjian said. “This is a state that elected Christie Todd Whitman and Chris Christie and found Jack Ciattarelli’s message of affordability pretty appealing.”

In spite of spending an estimated $80 million to provide nine days of early voting in New Jersey, only 207,000 people, or 3.1% of registered voters, opted for the new option this year. That’s a cost of almost $400 per vote.

But election officials still considered it a success.

“The reaction of the voters has been nothing short of phenomenal as far as liking the system and feeling good about it,” Atlantic County Board of Elections Chair Lynn Caterson said of early voting by machine. “I believe it is the wave of the future.”

Caterson said those who used it and liked it will tell others, and she expects use of early voting to increase in the future as a result.

It was expensive to buy the electronic poll books and new voting machines needed for early voting, and to train poll workers on the new equipment and pay them to staff the county’s six early voting sites. But most of that is a one-time expense, Caterson said.

Atlantic County commissioners approved a $2 million expense for the voting equipment, most of which was reimbursed by federal dollars.

Through Dec. 31, The Press will look back at 2021 through the lens of several major topics. COMING FRIDAY: 2021 by the numbers.

Looking back at the year that was in South Jersey

2021 was a challenging year for everyone. Over the last week, the staff at The Press of Atlantic City looked back at the stories that shaped S…

ATLANTIC CITY — Three men who gave him a second chance almost 30 years ago, keeping him moving toward success in spite of some mistakes, stood…

Working as the deputy chief of public affairs for the Washington, D.C., Homeland Security and Emergency Management Agency, Rebekah Mena had se…

Republican state Sen.-select Vince Polistina celebrates his victory and those of his down-ticket colleagues on election night at Linwood Country Club.

State Senate President Steve Sweeney was swept out of office on Election Day in favor of Republican newcomer Edward Durr.

As soon as the doors opened on the first day of early voting, people streamed in to the second floor of the Atlantic City Free Public Library on Oct. 23. Most voters said the new process on high-tech machines was easy and convenient.