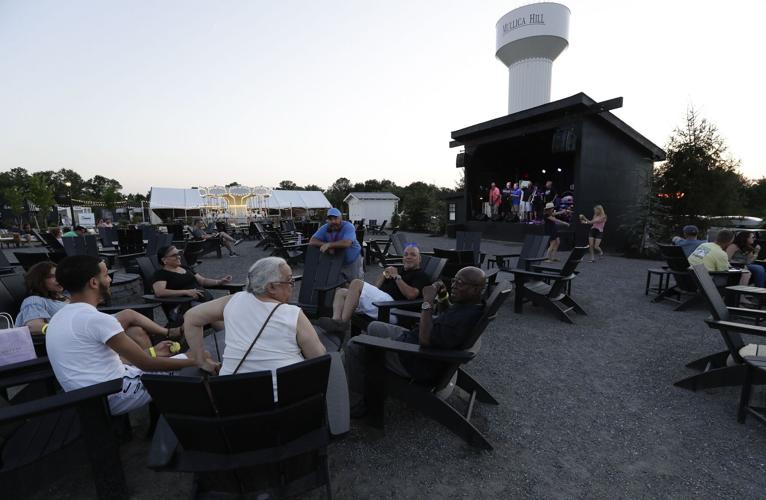 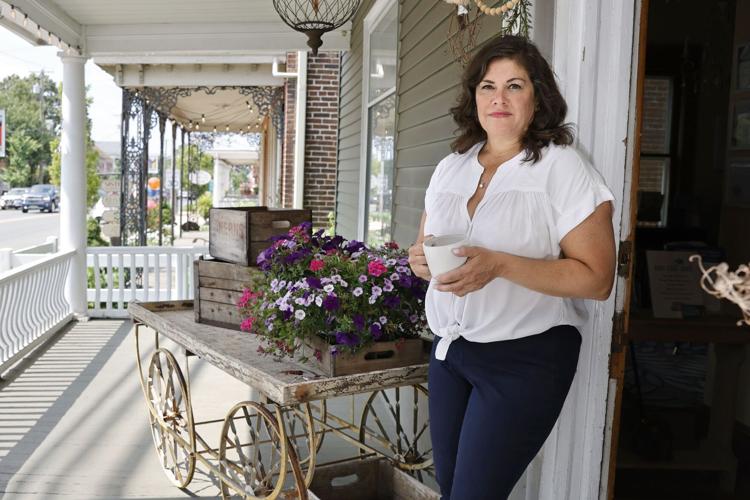 “We’re having a renaissance,” local merchant Hazel Dilsaver said. “I hear over and over again from customers that Main Street looks like something out of a Hallmark movie. And that’s something that can’t be manufactured.” 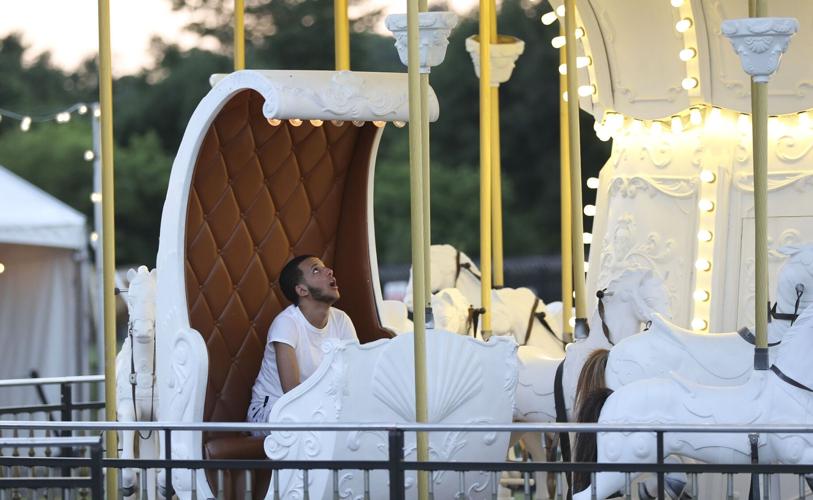 Steve Harbaugh — builder, philanthropist, dad — is creating a family-friendly entertainment destination in Mullica Hill, where he grew up.

What he said began when he “put up a bunch of Christmas lights” at his home four years ago is now expanding into a year-round attraction on vacant land along Route 77.

“I have a vision for this to be a place I want to take my own children, who are 9, 8 and 6. I keep them in mind with everything I do here,” said Harbaugh, whose family-owned company builds luxury homes on the Jersey Shore. “I want the village to be a place where my wife and I can enjoy a glass of wine and listen to acoustic music while the kids have fun.”

Harbaugh Village has the support of Harrison Township Mayor Louis Manzo and some members of the business community along Mullica Hill’s Main Street, which has evolved from a rural hamlet into a stylish, even hip, shopping and dining district.

Harbaugh Village is open only on Saturdays, except for special events, and charges admission. (It’s closed Saturday over the Independence Day holiday weekend). Yet some merchants and restaurateurs in the restored Victorian homes and other vintage buildings in the heart of town are concerned that it will lure customers away.

“We have a charm no other town can capture,” said Hazel Dilsaver, who opened her Farm House Design store on Main Street 22 years ago. Since then, she and other merchants have weathered economic downturns, construction projects and the pandemic, but have been buoyed by an influx of specialty clothing and houseware retailers and new dining spots.

Main Street is also home to the Old Town Hall Museum and has long been on the national and state registers of historic places.

“We’re having a renaissance,” Dilsaver said. “I hear over and over again from customers that Main Street looks like something out of a Hallmark movie. And that’s something that can’t be manufactured.”

Harbaugh said he views his namesake attraction as an “extension” of Main Street, not a competitor.

Sarah Noll grew up in Mullica Hill and opened her Cherry on Top Ice Cream Shoppe five years ago. “In the last few years a lot of great little boutiques have opened in town,” she said. “We have a little something for everyone.”

Noll is also among the Main Street merchants who have opened a satellite space in the row of vendor huts at Harbaugh Village. She says it has boosted business at her shop, as well.

“It’s been good for my sales,” she said. “It’s been good to see new people coming through town. New businesses like Harbaugh Village push everyone else to do more.”

‘Great for our downtown’

Originally home to the Lenni Lenape people, Mullica Hill was settled by English and Irish Quakers, and later, Finns and Swedes, beginning in the 17th century. It’s now part of Harrison Township, a 19-square mile, steadily developing expanse of gentle hills crossed by major highways, including the New Jersey Turnpike.

“The township has wanted to control the growth, bring in desirable commercial development, and maintain and enhance the charm of our historic main streets,” Manzo said. Harbaugh has a five-year, $6,000 annual lease with the township for the village site.

“I believe that what Steve is building could become a really major destination,” Manzo said. “It could be great for our downtown, accentuating it and bringing in more people. He never does anything halfway.”

Harbaugh Village was born from a 2018 holiday decorating extravaganza that turned the Harbaugh family home in East Greenwich Township into an homage to 1988′s beloved “National Lampoon’s Christmas Vacation.”

Drive-by visitors dropped off so many toys that Harbaugh and his family decided to establish a year-round charity to provide toys to sick or needy children. Harbaugh House is now headquartered in the village, which itself was launched for 12 days last Christmas and attracted thousands of toy-bearing visitors, he said.

Harbaugh Village “enables us to do more,” said Harbaugh, noting that the charity also has partnered with other organizations to assist families in need of housing.

Meanwhile, the village is a work in progress, with a barn raising and further expansion planned. An agro-tourism feature also is a possibility.

“We want to keep the charity in mind with everything we do and keep this the family-friendly outdoor venue rolling throughout the year,” Harbaugh said. “We’re planning a corn maze and an amazing pumpkin walk in the fall.”

A fire burning in Wharton State Forest was 95% contained as of late afternoon Tuesday, and f…

Genevieve Gramaglia, who has a Main Street clothing and accessories shop called Serendipity XIX and also rents a vendor hut at the Village, sees it as a plus for the entire community.

“It will make Mullica Hill more of a destination spot,” she said. “It means there’s more to do in town. The more you have to offer, the more people who might not have traveled through here will come here.”

A mother of four, Gramaglia also said the village and Main Street share a “families with strollers” sort of vibe that “draws people from all over.”

But Jim Malaby, who owns Blueplate — a fixture of the Main Street dining scene for 17 years — said Harbaugh Village “is a hot-button issue for a lot of people” in the center of town.

“If you go to the village and spend a couple hours, you’re not going to stop on Main Street for another couple of hours,” he said.

“Everybody can get behind that,” he said. “But as for how the village affects Main Street, I don’t see it as complementary.

Jeff Downs, the owner of Main Street’s newest establishment — the Brew X Bread cafe — also is a lawyer in town, and he’s trying to facilitate the relationship between Harbaugh Village and the business community.

“I’m doing everything I can to bridge the gap so both can work together,” he said. “I hope the larger community can support both.”

As a trustee of the Harrison Township Historical Society, Jim Turk is well-versed in all things Mullica Hill, past and present. He said that in addition to having served as a retail and community center for surrounding farms, Mullica Hill historically was a place that attracted visitors, especially in the summer.

“In the 1880s there was a train, and people came here from Philadelphia and Camden,” he said. “There was stuff to do here in the summertime. People were coming here essentially for entertainment.”

“As long as we care for Mullica Hill and preserve the charm and the characteristics that make it a destination,” he said, “it will do well.”

LAYTON — Alongside fields of wildflowers and on restaurant porches, written large outside a sportsmen's store above ads for firewood and deer …

Months of hearings by the House Jan. 6 Committee have failed to change public opinion on former President Donald Trump and the events at the C…

New Jersey’s top environmental officer says the state is not ready for the worsening effects of climate change and rising seas. Speaking Thursday at a state government hearing in Toms River, Commissioner of Environmental Protection Shawn LaTourette said, “We should all be alarmed.” He says warming temperatures and rising seas will only get worse and New Jersey, its people and businesses need to commit to years of sustained action to shore up the state's defenses. That includes elevating homes, building storm barriers and using natural solutions like restoring salt marshes and wetlands to absorb stormwater and trap planet-warming carbon.

2 killed, 17 injured when Megabus on way to Philadelphia crashes

Most of New Jersey is 'abnormally dry' as Gov. Murphy asks residents to conserve water

It’s not hard for South Jersey residents to gauge how dry things have become: All they have to do is look at their lawns and gardens.

A bomb threat to a northern New Jersey hospital has resulted in weapons charges against a hospital executive. Police in Secaucus say bomb detection dogs sniffed out a cache of weapons last month in an unlocked office closet at Hudson Regional Hospital. Reuven Alonalayoff, the hospital's marketing director, was arrested Sunday at Newark Liberty International Airport and charged with possessing an assault firearm and possessing high capacity magazines. Police say in addition to the assault rifle and magazines they found 11 handguns and 27 rifles or shotguns. The bomb threat turned out to be a hoax.

If what doesn’t kill you truly makes you stronger, then Titan is the strongest turtle in the ocean. The juvenile Loggerhead turtle has been gashed by a boat propeller, had part of his front flipper bitten off by a shark, and was being attacked by a different shark when two New Jersey fishermen saved him. They called Sea Turtle Recovery, a group that rescues and rehabilitates turtles before returning them to the ocean. Tuesday morning, Titan was among eight turtles returned to the sea in Point Pleasant Beach after being nursed back to health. The group has returned 85 rehabilitated turtled to the ocean since 2016.

“We’re having a renaissance,” local merchant Hazel Dilsaver said. “I hear over and over again from customers that Main Street looks like something out of a Hallmark movie. And that’s something that can’t be manufactured.”