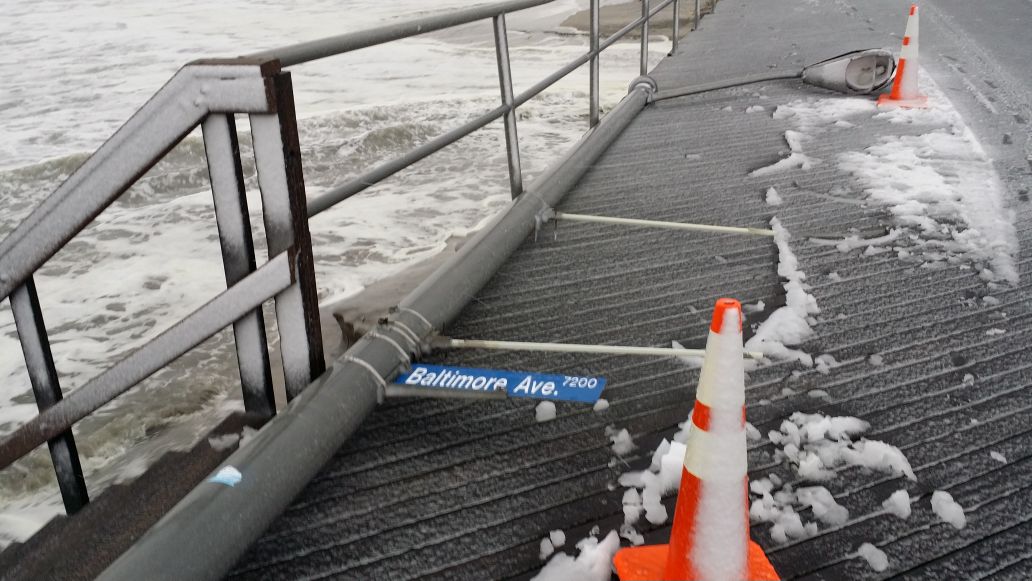 This streetlight on Ventnor's Boardwalk was a storm casualty Saturday. The ocean was almost at the Boardwalk two hours before the evening high tide. 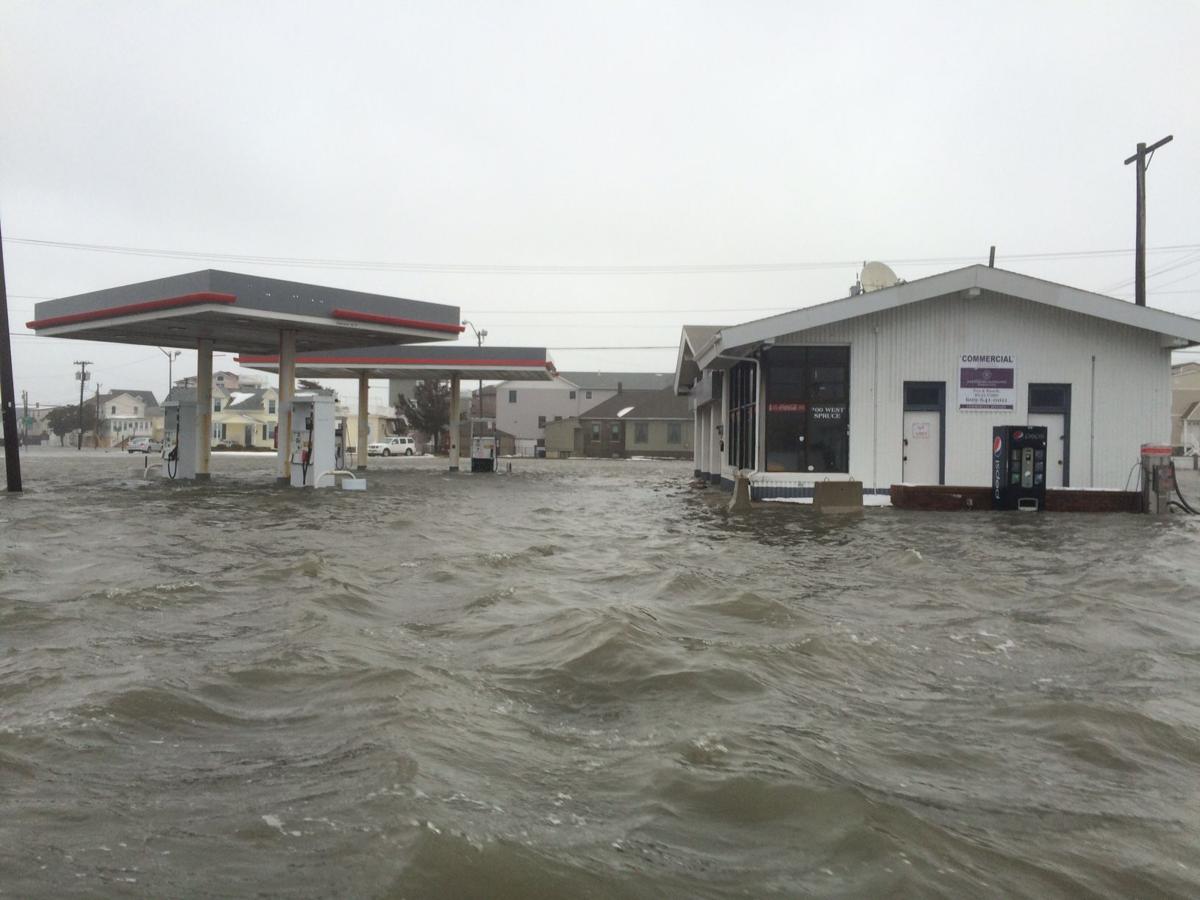 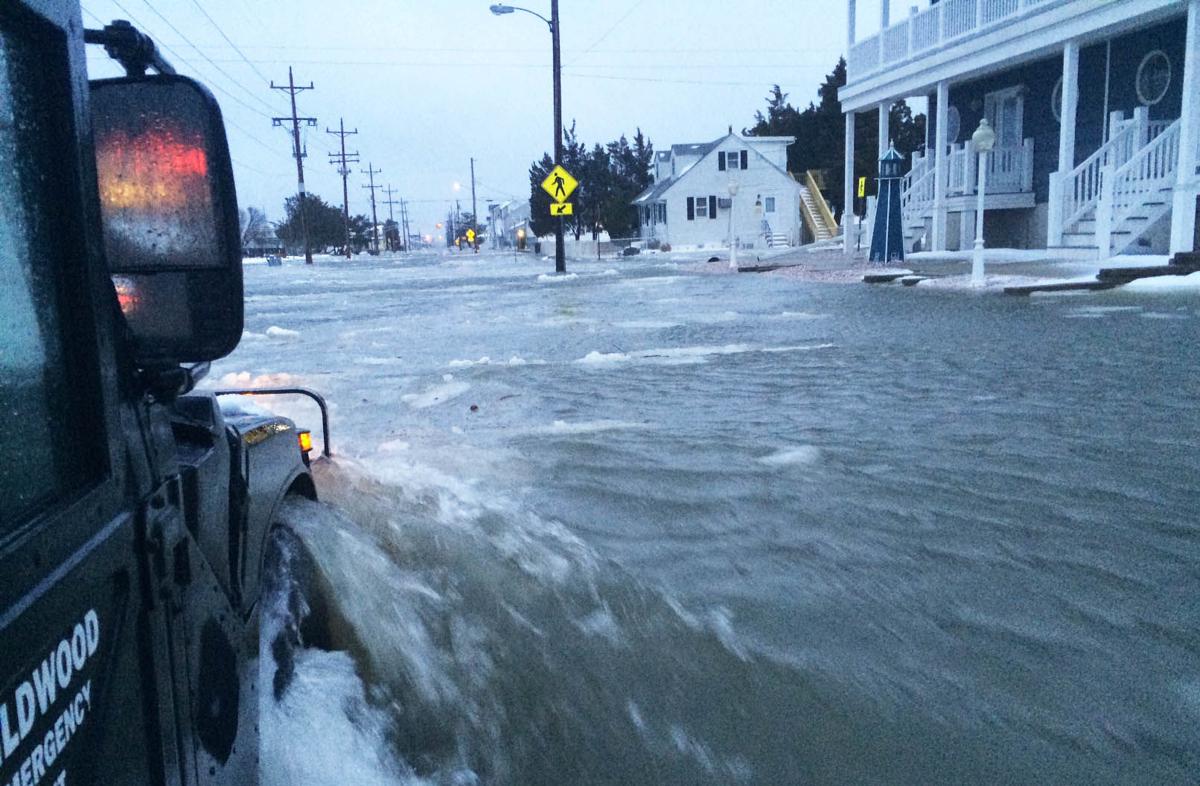 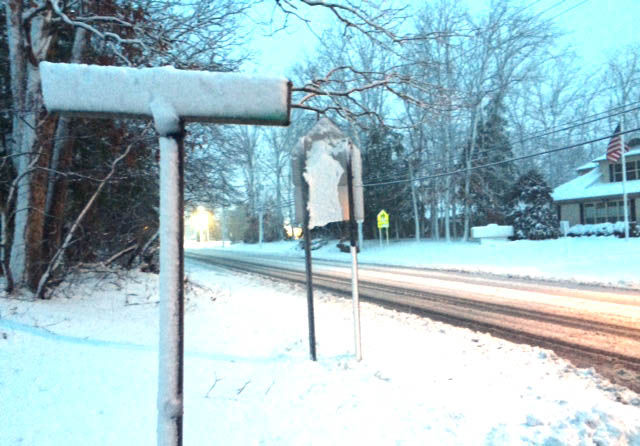 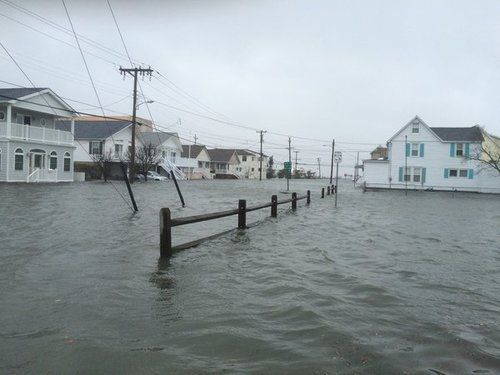 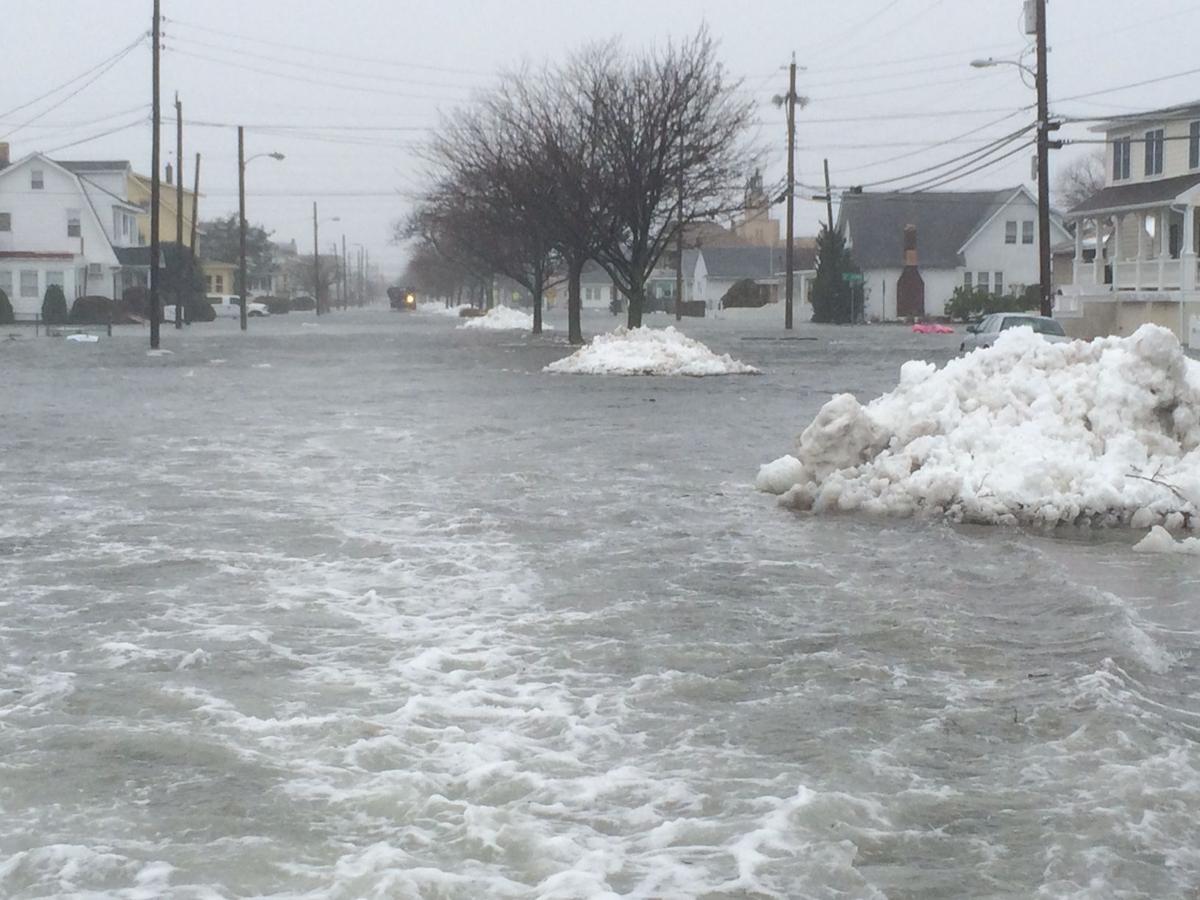 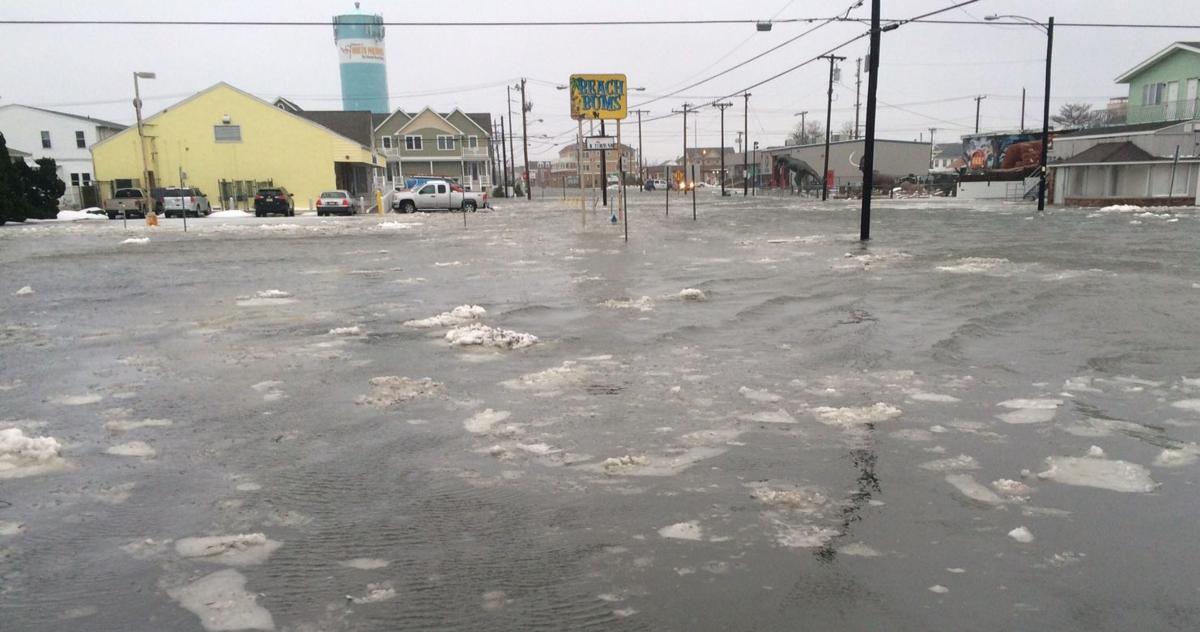 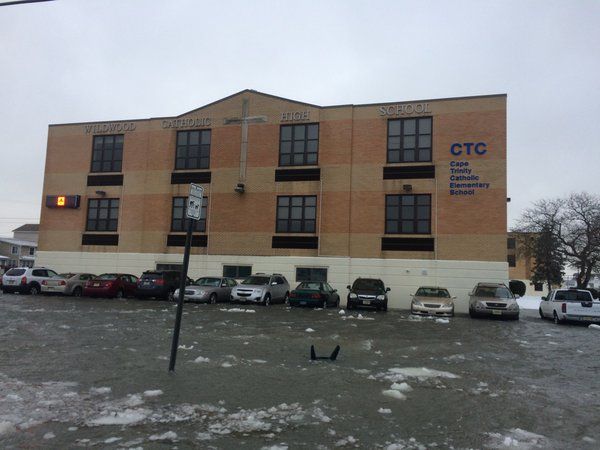 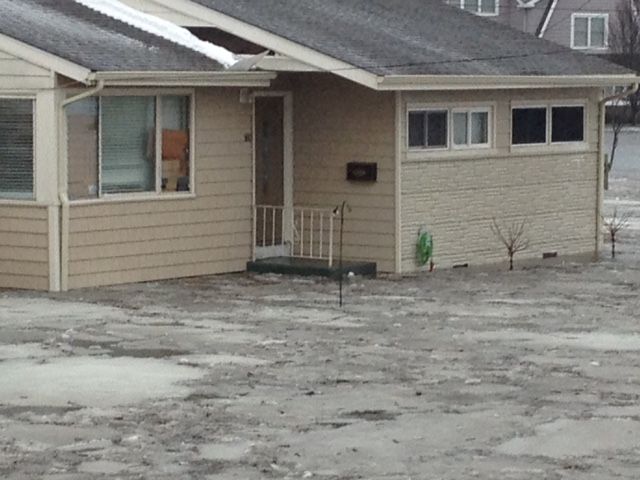 Floodwaters surround a home Saturday at Oxford and Somerset lanes in Ocean City.

“This is definitely one of the worst Northeast storms that we’ve experienced in a long time,” acting Atlantic City Fire Chief Scott Evans said. The city’s Police and Fire departments rescued more than 125 people from floodwaters Saturday, officials said.

The bay poured over bulkheads, creating a lake that spread over most of the island. Higher parts of the Wildwoods weren’t spared, as water inundated yards, driveways and parked cars. North Wildwood and Ocean City emergency crews used military-surplus vehicles to ferry stranded residents to warming centers as the storm turned city streets into a network of canals.

Pam Bross spent the afternoon mopping up water that flooded her 24th Street Market in North Wildwood. It takes extreme flooding for her store off New Jersey Avenue to see flooding, she said. The last time was during Sandy.

“I just hope it isn’t a sign of things to come,” she said.

“We’re bailing water out like crazy,” Barbara DeCicco said from her home on Vendome Avenue in Margate, near the bay. “Our street looks like the Arctic, with the ice and the water.”

“We had a number of people who had flooding in their homes and businesses in the north end of Atlantic City and Ventnor,” said Ed Conover, Atlantic County’s deputy director of emergency management.

Causeways up and down the coast were closed to flooding.

In Atlantic County, eastern stretches of the White Horse and Black Horse pikes were closed, along with parts of Route 9 and Shore Road in Absecon. Mill Road in Absecon was closed but later reopened.

Downe Township has emergency flood plans that include opening shelters if necessary, Wood said, adding the Red Cross and Salvation Army are standing by in case they’re needed.

More tidal flooding is expected this morning, though not to the same extent, Press meteorologist Dan Skeldon said.

Meanwhile, more than 33,000 Atlantic City Electric customers were without power Saturday as winds topping 60 mph lashed the shore. Outages stretched from Barnegat Township south to Cape May and as far west as Mantua in Gloucester County.

Frank Tedesco, a spokesman for the electrical utility, said crews could not begin aerial repairs to malfunctioning wires until winds dip below 40 mph.

“It could be into (Saturday) evening before the winds subside” and crews begin working in bucket trucks, he said. “We’re going to restore as much as we can and also work around the issues as best as we can.”

Cape May County suffered the largest number of outages, at more than 20,000, with large pockets reported in the Wildwoods, Avalon and Stone Harbor.

Statewide, utility companies reported that nearly 50,000 customers were without power, with the majority along the coast.

Jersey Central Power & Light said nearly 16,000 customers are without power, with outages along the coast from north of Sea Bright south to near Barnegat Light on Long Beach Island. Among the problems that utility faced was removing the mast of a sailboat that got caught in power lines Saturday in Belmar, Monmouth County.

On top of that, fires were reported at a coffee shop at 42nd Street and Landis Avenue in Sea Isle City and a condo complex in Brigantine. Both fires are under investigation, and it is unclear whether they are linked to the storm. There were no injuries reported.

Gov. Chris Christie paused his presidential campaign to travel from New Hampshire to New Jersey, where he urged residents to stay home so crews could continue clearing roads. At a Saturday afternoon news conference he again assailed Margate officials for fighting a state-mandated beach-and-dune project.

“Early this morning already there was significant water in the streets in Margate and ice that was floating up the streets, that had already gone up the wall the residents and (city) government says is good enough to protect them from any storm,” Christie said. He also took to task the Ocean County town of Point Pleasant Beach, which is fighting the state on dunes, too.

Snow that began blanketing South Jersey on Friday night was forecast to continue through Saturday, with another 2 to 6 inches expected to pile up across the region by day’s end.

Western Atlantic County saw as much as 18 inches of snow on the ground Saturday afternoon, with 11 inches reported in Weymouth, 9 inches at Atlantic City International Airport and 7 inches in Cape May Court House. As much as 9 inches fell in parts of Cumberland County, where the Cumberland Mall in Vineland was closed and expected to reopen 11 a.m. today.

On Millville’s Main Street, cars were boxed in by banks of snow, some more than 3 feet high, built up by passing plows. Bob Moore said he started shoveling out his two cars about 7 a.m. There was still plenty more snow to move by 11 a.m., but Moore said he’s taking it in stride.

Jackie Marquez dug out her driveway as her 12-year-old nephew, Marcus Loatman, frolicked nearby in the snow.

Atlantic City opened warming centers at the Pennsylvania Avenue School, the All Wars Memorial Building and the Police Athletic League for residents who had no heat or electricity or whose homes were flooded.

By afternoon, “electrical transformers started blowing all over the city. It was like the Fourth of July,” fire chief Evans said. The city’s Fire Department assisted with the blaze in Brigantine, saving nine of 12 units from heavy damage.

The Associated Press and Staff Writer Thomas Barlas contributed to this report.

Two of the main roads heading into Atlantic City are closed as of 8 a.m. this morning.

17 dead, up to 3 feet of snow amid East Coast storm

NEW YORK (AP) — A blizzard with hurricane-force winds brought much of the East Coast to a standstill Saturday, dumping as much as 3 feet of sn…

Stone Harbor waiting to be plugged in after damaging nor'easter

STONE HARBOR – It wasn’t the floodwaters that drove Mayor Suzanne Walters to The Reeds at Shelter Haven. It was the power outage.

NORTH WILDWOOD – As officials toured their towns in the light of day Sunday, it became apparent in Cape May County that Jonas had toppled Sand…

ABSECON - Police announced Sunday afternoon that all roads previously closed due to this weekend's coastal storm are open once again.

About 300 still without power in South Jersey

The flood waters rose during three perilous high tides as a nor’easter made its way through the region Friday and Saturday, but Atlantic Count…

Jonas' toll: $67 million and counting in Cape May County

If this year’s hurricane outlook is correct, we’ll get to Matthew.

What to know about Tidal Flooding

Firefighters battled a fire at a condominium in fierce winds early Saturday in Brigantine.  Most of the state was facing a blizzard warning fr…

South Jersey residents began to dig out from the first big storm of the season. The storm, which hit just after the evening commute, dumped to…

Click here to see what others are saying about the storm

Governor Christie: We Need To Get Moving On These Dunes Projects

This streetlight on Ventnor's Boardwalk was a storm casualty Saturday. The ocean was almost at the Boardwalk two hours before the evening high tide.

Floodwaters surround a home Saturday at Oxford and Somerset lanes in Ocean City.