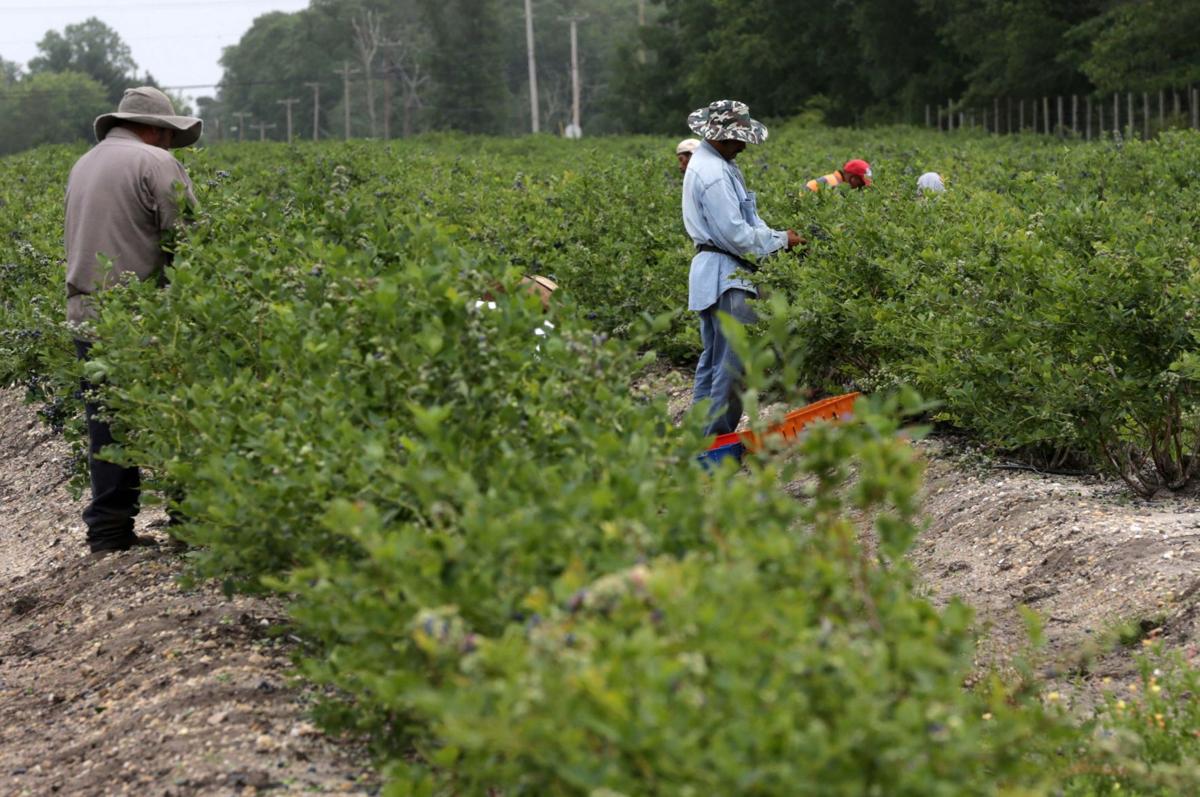 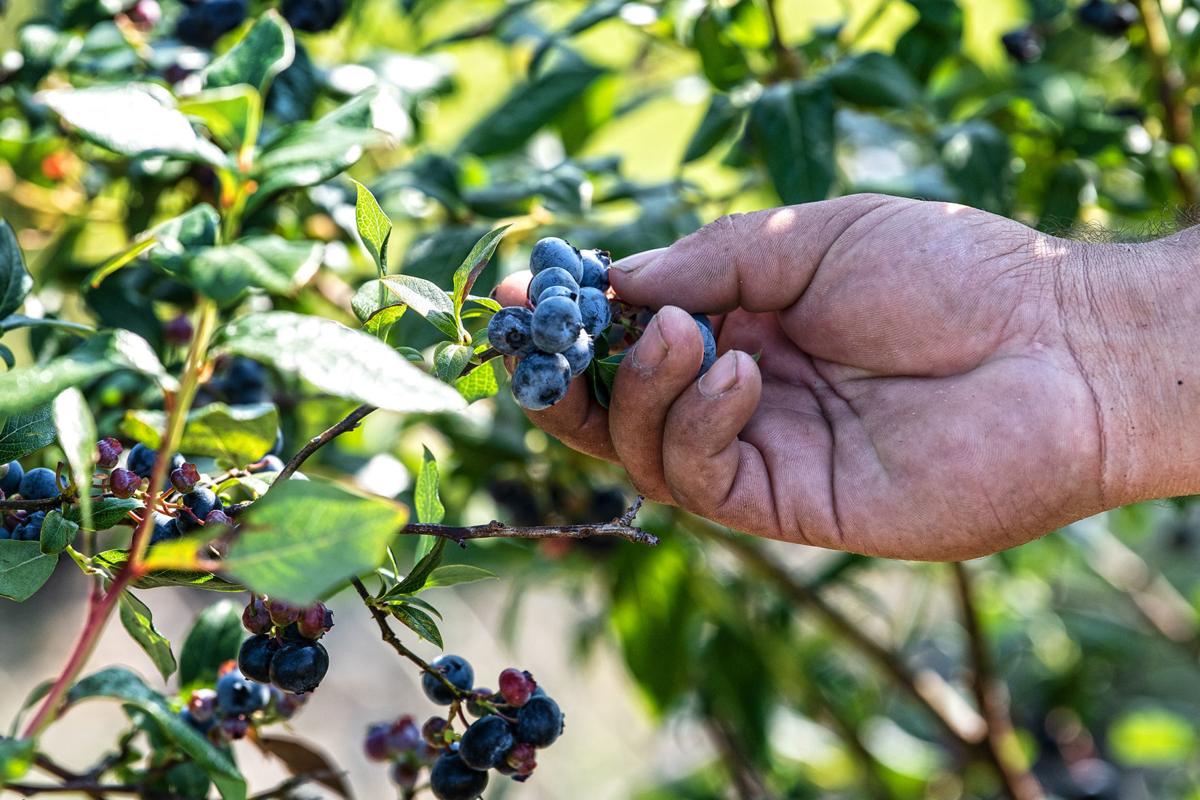 There is concern about seasonal or migrant farm workers as a vector for COVID-19 infections, but testing of the population so far has found the percent positive to be about 16% — similar to that of the general public getting tested — state officials said this week.

The highest rates of farmworker infection have been found in Salem and Gloucester counties, with lower rates in Cumberland and none testing positive in small samples in Ocean and Monmouth counties.

Atlantic County testing has not yet begun, but will start soon, according to the state.

By the time many migrant workers get to New Jersey, after working harvests in more southern states, they will already be well trained in social distancing and mask wearing, said blueberry farmer Denny Doyle.

The blueberry harvest will start about June 14, Doyle said, but he has been in contact with southern farmers and feels confident the pickers will arrive ready to follow CDC guidelines.

The state also issued guidance this week for farm owners on working conditions, testing and treatment procedures to minimize the risk of spreading COVID-19 among farm workers, who often are transitory and live in crowded, shared-living environments.

On Thursday, Health Commissioner Judy Persichilli said 595 seasonal farm workers had been tested on 16 farms, with 69 positives, at Gov. Phil Murphy’s Thursday news conference. She said the state is coordinating with four federally qualified health centers in testing on the farms.

That’s a positive rate of 16%, compared to about 14% of all those tested statewide this week, according to the state Department of Health.

The current testing is baseline testing, the health department spokesperson said. A retesting plan will be developed depending on the results.

Protecting the health of seasonal and migrant farm workers from COVID-19 is “not just a South reality, but is overwhelmingly a South Jersey reality,” said Murphy at the Thursday news conference.

Doyle, who is also chairman of the New Jersey Blueberry Advisory Council and heads up the Good Practices Committee for the national High Bush Council, said he is optimistic that blueberry pickers will arrive well trained and ready to follow health guidelines to prevent viral spread.

“Florida has finished their harvest, and got through without any major incidents. Georgia is picking now and doing fine. North Carolina has started,” Doyle said. “So, we’ve had a chance to see how the other states handled this.”

New Jersey’s blueberry pickers come from Georgia and North Carolina predominantly, Doyle said. “Everybody’s been doing what the CDC wants us to do.”

He said blueberry growers are in constant communication with each other about the issue through online meetings.

But State Senate President Steve Sweeney said Tuesday during a Press of Atlantic City editorial board meeting that he is concerned about high rates in Salem and Gloucester counties.

“One farm in Salem County had more than 50% positive,” Sweeney said. “These are people handling our produce — living in quarters on top of each other. That’s not conducive for safety.”

The state guidance to farm owners included information on social distancing, screening and education to prevent the spread of the novel coronavirus, Persichilli said.

They include requiring social distancing during work, in transportation and in farmer-provided housing. And those who are ill are to be given separate housing and kept away from other workers.

She said the education would include emphasizing the need to wear a mask at all times, and proper hand washing and disinfection techniques.

Persichilli also said the state has bed spaces set aside for seasonal workers who need to isolate.

The guidance was created as a joint effort between the state Departments of Health, Agriculture, and Labor and Workforce Development, according to Murphy’s office.

_ Workers must wear employer-provided face coverings or masks at all times during work hours, and in the presence of others;

_ Employers are to require workers to remain at least six feet from one another while working in the fields or any food farming production, processing or cultivation.

_ Employers must follow CDC recommendations for congregate living if workers are provided housing by the employer. Beds are to be at least six feet apart or at least three feet apart with a partition, such as hanging a sheet or a shower curtain.

_ Mealtimes should be staggered to reduce crowding and ventilation must be provided in sleeping and living quarters with openable windows or doors with properly fitted screens.

_ Employers must implement social distancing while transporting workers to and from their residency and work. Vehicles should be limited to 50% capacity.

_ Employers are to ensure disinfection of high-touch areas, such as in communal areas, work and transportation vehicles, in accordance with CDC guidance.

_ Employers are to collaborate with their local Federally Qualified Health Center (FQHC) or local public health officials to identify culturally, linguistically, and literacy-level appropriate posters and education materials for workers.

_ Employers are to screen workers for symptoms prior to work shifts. If any are shown, the worker must immediately be separated from other workers and connected to a physician. Pending medical attention and testing, workers with symptoms consistent with a COVID-19 infection are to be confined to individual rooms and avoid common areas.

_ Once a worker is suspected or diagnosed with COVID-10, employers are to contact the local health department and immediately assign the worker a separate bathroom and provide separate living space. Workers who were in close contact with the affected workers are to be screened and watched for symptoms.

The full guidance can be found at: https://nj.gov/health/cd/documents/topics/NCOV/COVID_MigrantFarmWorkerGuidance_5.20.2020.pdf

The group of seven young professionals from South Jersey learned about its common interests on Facebook. They were the sons and daughters of m…

South Jersey farms and state prepare for harvest during pandemic

In Hammonton, concern but no panic over high COVID numbers

HAMMONTON — On Thursday inside Tales of the Olive, one of the many specialty stores that line the downtown drag of Bellevue Avenue, manager Ke…