WEST WILDWOOD — Mayor Christopher Fox has been hit with about $25,000 in fines by the state Local Finance Board — the most ever levied against an elected official — for multiple ethics violations.

Fox did not immediately respond to requests for comment.

“We’re happy to see it wasn’t just a slap on the wrist,” said Susan Czwalina, treasurer of the Concerned Taxpayers of West Wildwood.

She said the group was not happy with the way a lawsuit brought by Ferentz against the borough was handled by Fox and the other commissioners.

“(The fine) is nothing compared to a $1.7 million judgment,” Czwalina said of the jury award to Ferentz in a case that alleged mistreatment by a former mayor. “But it’s something.”

To accommodate the payments, it furloughed workers last year and has frozen salaries this year and next. It also has increased taxes, which have been somewhat offset by a decrease in school taxes, but taxpayers would have received a tax cut if not for the judgment.

The borough’s insurance company refused to pay the judgment, alleging the borough failed to put on an adequate defense in the case.

Fox was notified of the fines in an April 11 letter from Melanie R. Walter, chairwoman of the Local Finance Board, according to a copy of the letter provided by the state Department of Community Affairs.

The letter said Fox could request an administrative hearing if he wanted to contest the fines.

Added to the letter were 21 pages of descriptions of the alleged ethics violations.

Some of the violations were related to his failure to disclose all income he receives on state-required financial disclosure statements and actions he took as mayor of West Wildwood to enter into a shared-services agreement with neighboring Wildwood, where he is employed as business administrator.

The board said Fox violated state ethics laws when he voted in favor of designating himself director of public safety, with oversight of the Police Department, 10 days before the borough reinstated Ferentz as a police officer and about a month before she was named chief.

Fox also allegedly violated the law when he gave Ferentz back pay and pension credit for a time in which she did not serve in the Police Department; and voted in favor of a 50 percent increase in Ferentz’s salary from $67,000 to $101,000, from 2015 to 2017.

The investigation of Fox was opened in August, according to the documents. 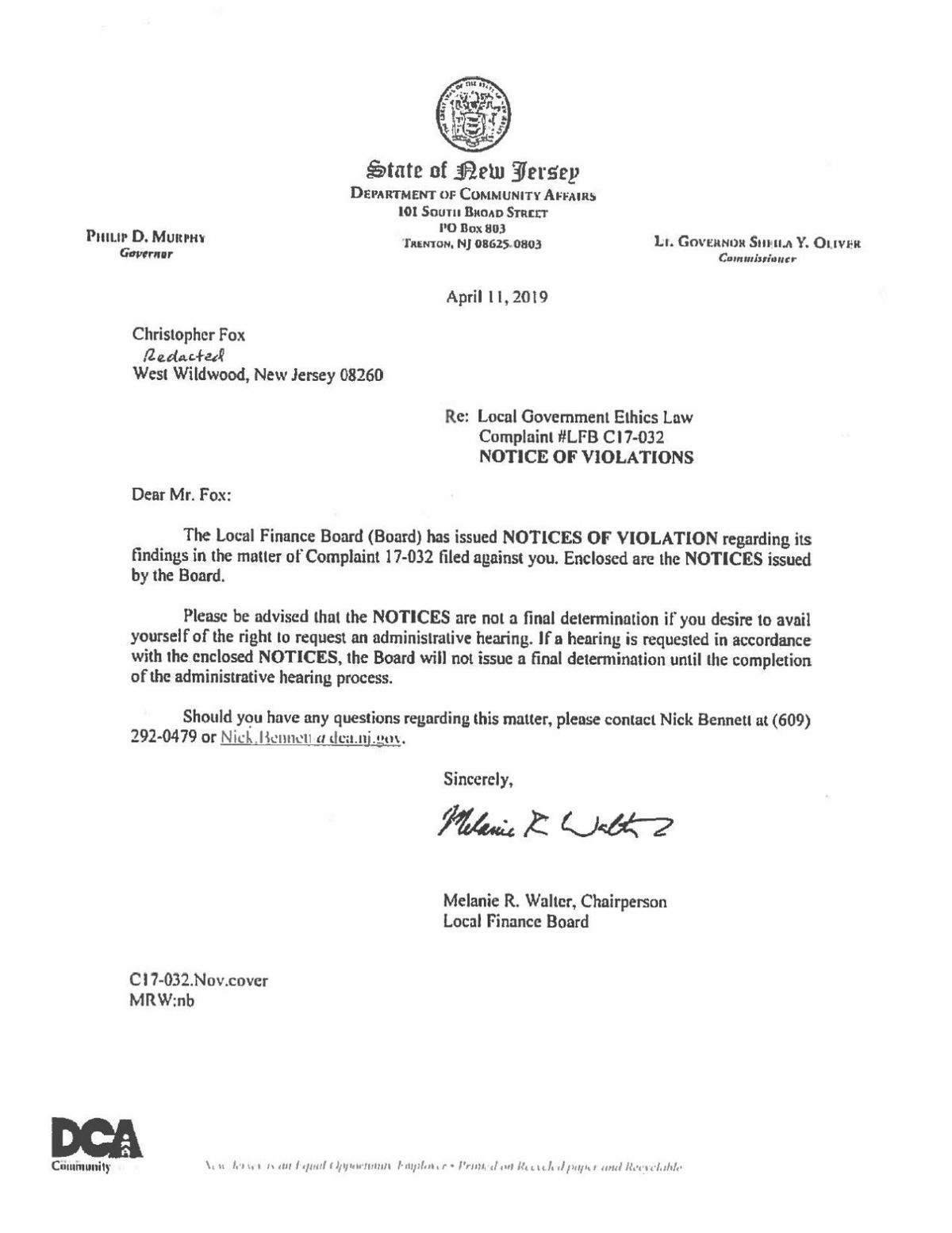 The fine for each violation is within the prescribed $100-$500 statutory range, said DCA spokeswoman Lisa Ryan.

The state could not previously release information on the investigation or fines, said Ryan, because board regulations require 30 days to pass after a determination before cases can be discussed.

WILDWOOD — Commissioners voted 2 to 1 on Wednesday to terminate city Administrator Christopher Fox, the mayor of West Wildwood who was recentl…

WEST WILDWOOD — Second homeowners make up about 65% of the borough’s population, but they cannot vote here without giving up voting rights at …

WEST WILDWOOD — At the first Borough Commission meeting since Mayor Chris Fox’s $24,900 in state ethics fines became public and he lost his jo…

Things just go from worst to even worse in West Wildwood, the town that shouldn’t exist (as an entity separate from the other Wildwoods).

Too much power? Commission form gives local leaders most clout

WEST WILDWOOD — The nonpartisan commission form of government used here, where the mayor is under a cloud of state ethics charges, gives more …

WEST WILDWOOD — Mayor Christopher Fox has requested an administrative hearing to appeal his recent ethics violations and $24,900 in fines from…

Who will hear West Wildwood mayor's appeal of $24,900 in ethics fines?

WEST WILDWOOD — Mayor Christopher Fox’s appeal of $24,900 in fines for alleged violations of state ethics laws will either be heard by the Dep…

WEST WILDWOOD — Christopher Ridings has resigned as borough administrator of the tiny municipality where the mayor is fighting $24,900 in stat…

WEST WILDWOOD — It wasn’t just that commissioners rehired Jacquelyn Ferentz as a police officer, dropped disciplinary charges against her and …

WEST WILDWOOD — There will be a borough commissioners meeting Wednesday at 3 p.m. — the first since two appellate judges said the town, not it…

West Wildwood officials say attorney told them to do it

WEST WILDWOOD — The borough has agreed to pay former Class II police Officer Jerermy Mawhinney $215,000 to settle his lawsuit against the boro…

Just a meeting change? West Wildwood residents say it's a way to silence them

WEST WILDWOOD — Residents are demanding the return of the Friday night Borough Commission meeting, a decades-old tradition that allowed the ma…