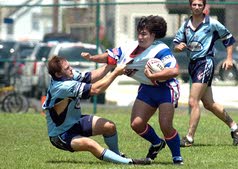 Members of the New York Knights rugby team gang up on a player from the Bucks County Sharks on Saturday during the War at the Shore tournament at Dealy Field in Sea Isle City. 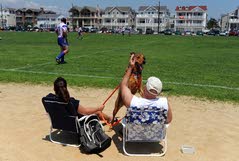 Stephanie and Steve Natalie, of West Chester, Pa., watch the games from the sideline with their dog Sadie. The three were part of a crowd of mostly players’ family and friends.
By EMILY PREVITI, Staff Writer, 609-272-7221

It costs nothing for spectators to hang out at War at the Shore, the annual, daylong tournament among American Rugby League teams at Sea Isle City's Dealy Field. But paying fans will determine whether the sport's appeal can sustain a professional league when the National Rugby League of the United States launches in March.

At the very least, the planned $15 ticket price will offer a cheaper alternative to the comparative expense of attending football and basketball games, according to Martinelli, who played rugby during his college years.

"Baseball tickets are cheaper, but Phillies (games) are always sold out," the West Chester, Pa., resident said. "So, especially around here, there's nothing for kids to go and watch. … I would watch (professional rugby), but I would not invest in it. Same with soccer, but I don't see that catching on."

As they planned the National Rugby League, investors and organizers studied soccer but looked more closely at lacrosse and football. Those sports follow a style of play and command a skill set similar to those involved in rugby, according to Marc Cecero, a principal in the new league.

The league will field teams in eight major cities. The list is not yet finalized but is expected to include Philadelphia, New York, Denver and Los Angeles.

The existing 12-year-old American league will continue to operate as an amateur organization but also pool potential talent for the National league. Initially, the league will build its core by recruiting players at the ends of their careers in well-established pro leagues in Australia, New Zealand, South Africa and the United Kingdom, according to Cecero, who played the sport himself for eight years starting in 1973 when he entered college.

He also anticipates drawing from 800,000 athletes already playing what is known as rugby union for community, high school and college clubs nationwide.

In rugby union, the ball remains in play between 15-player squads for shorter durations than in rugby league, which uses 13-player teams.

That makes league games faster-paced, higher-scoring and, therefore, potentially better entertainment, said Cecero, based on the response to the rugby league in the Australian market.

He also looked favorably at the 17,000-fan turnout to a November 2008 game between all-star teams from the U.S. and Australia at Franklin Field in Philadelphia.

The American audience, however, faces an ever-burgeoning bevy of diversions that make success tough for any fledgling venture, according to Niranjan Pati, dean of the Rohrer College of Business at Rowan University in Glassboro, Gloucester County. He admitted limited knowledge of rugby but expressed doubt about how well it would fare in that atmosphere, especially as compounded by the recession, and said Cecero's prediction the league would break even in three years seemed somewhat optimistic.

The forthcoming league will cost $25 million per year to run. Top players will get $100,000 salaries to start. That pales in comparison with other athletic contracts in the U.S. and is about 36 percent of the paychecks typically cut in countries where the sport has a significant following, but it could allow those players to extend their careers, Cecero said.

Cecero and others - including David Niu, a former pro player from Australia who founded the American league and will head the National league - are negotiating with several television networks, including SpikeTV, over a reality series chronicling try-outs scheduled for October. Meanwhile, they hope the sport will continue to expand among children and amateurs.

"We believe U.S. players ultimately will emerge as the best," Cecero said. "That's something that will help rugby league worldwide because everyone looks to the U.S. for sports."

Such growth would create a needed infrastructure and youth base here, Pati said. He questioned the sustainability of professional rugby without it, given pro soccer's slow ascension despite its wild popularity abroad and amateur growth stateside in the wake of the 1996 Olympics. Women's soccer debuted at those games. The U.S. team won the gold medal then and did the same in 2004 and 2008.

"If you poll 100 people, I don't know how many people would say, 'Yeah, I'm familiar with the game,'" Pati said. "I'd say rugby has market potential, but I don't know the time is ripe enough. But again, who knows?"

Members of the New York Knights rugby team gang up on a player from the Bucks County Sharks on Saturday during the War at the Shore tournament at Dealy Field in Sea Isle City.

Stephanie and Steve Natalie, of West Chester, Pa., watch the games from the sideline with their dog Sadie. The three were part of a crowd of mostly players’ family and friends.
© Copyright 2021 The Press of Atlantic City, 1000 West Washington Ave. Pleasantville, NJ | Terms of Use | Privacy Policy
Powered by BLOX Content Management System from TownNews.com.
You don't have any notifications.