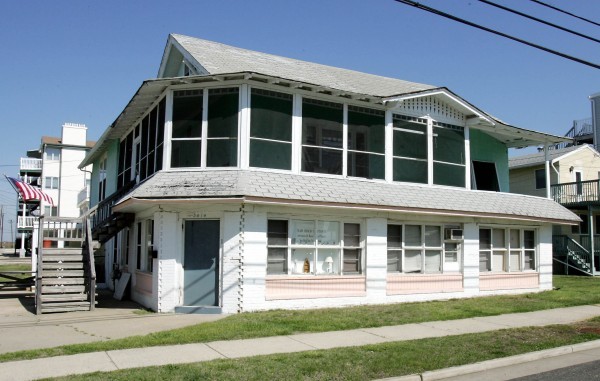 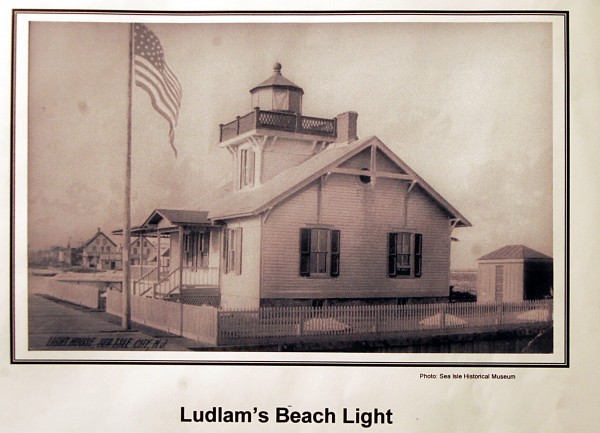 The Ludlam Beach Lighthouse as it appeared when it was a lighthouse.
By BRIAN IANIERI Staff Writer

Charles Adams lost a city Zoning Board hearing Monday night in which he sought variances to build a triplex on his 8,000-square foot lot at 3414 Landis Ave. — the site of the old lighthouse. City zoning rules allow only two units in that area.

The decision thwarts a nonprofit preservation group’s hopes to move the building and restore it to its original 1885 appearance.

“Last night was a must win, and I didn’t win,” said Adams, who had planned to donate the building if he received approval to rebuild.

Adams is considering an appeal of the 6-1 vote denying his application.

The former lighthouse is currently a six-unit summer rental sitting on a flood-prone area of Landis Avenue two blocks from the ocean.

The federal government constructed the lighthouse at the request of city founder Charles K. Landis but took it out of service in 1924.

The building, which has no Fresnel lens and no longer resembles a lighthouse, has been used as a residence for decades. It was moved twice in the past 85 years.

For several years, Adams had plans to construct new rentals to replace the hulking building on the corner of 34th Street.

The former Ludlam Beach Lighthouse seemed destined for a landfill until Upper Township resident Bob Uhrmann started an effort to preserve the building, which has been dubbed “The Forgotten Lighthouse.”

Even the great grandson of the lighthouse’s first keeper — Joshua Hand Reeves — had thought a storm destroyed the lighthouse decades ago.

The place is becoming better known.

The Landis Avenue building was included as a bonus stop for the New Jersey Lighthouse Challenge in October. Despite a weekend storm that dumped eight inches of water in the backyard, more than 700 lighthouse enthusiasts toured the house, Adams said.

The Friends of the Ludlam Beach Lighthouse has worked with Sea Isle City officials to find a place to move the structure.

“There are very few buildings in Sea Isle City that have historical value,” said Genevieve Doris, a member of the lighthouse group.

However, the future of the old lighthouse is more complicated than one Zoning Board decision.

Sea Isle City is not sure whether it even wants the old building.

Officials are lured by the prospect of a lighthouse that could be used as a tourism attraction in a city whose economy relies on tourists. But some worry it could become a million-dollar money pit.

The City Council on Tuesday morning debated whether to include $100,000 for the building in next year’s capital plan.

The money would include funding to move the former lighthouse — at least temporarily — to a parcel of city-owned property near Fifth Street, officials said.

On Tuesday, some members of City Council said they only recently learned that the Friends of the Ludlam Beach Lighthouse wants the city to take ownership of the building to assist in earning grants to fund restorations.

City Councilman Frank Edwardi Jr. said he worries that ownership would put the city on the hook for much more than $100,000.

An early estimate suggests restorations would exceed $1 million. The city would also need to police the building and insure it, he said.

“Once we take ownership, we have it. We can’t put it back,” Edwardi said.

City Council expects to hold a meeting addressing the lighthouse before the end of the year.

“The dust just hasn’t settled yet to figure out what’s going to happen here,” Uhrmann said.

SEA ISLE CITY - The former Ludlam Beach Lighthouse had seemed destined for an obscure demolition in a town that said goodbye to it in 1924.

A wrecking ball in fall for Sea Isle lighthouse?

SEA ISLE CITY - The clock is ticking on an effort to move the former Ludlam Beach Lighthouse and find a place on the island to put it.

SEA ISLE CITY - Genevieve Doris has fond memories of growing up in what used to be the Ludlam's Beach Lighthouse. Now she is part of a group o…

The Ludlam Beach Lighthouse as it appeared when it was a lighthouse.
© Copyright 2021 The Press of Atlantic City, 1000 West Washington Ave. Pleasantville, NJ | Terms of Use | Privacy Policy
Powered by BLOX Content Management System from TownNews.com.
You don't have any notifications.