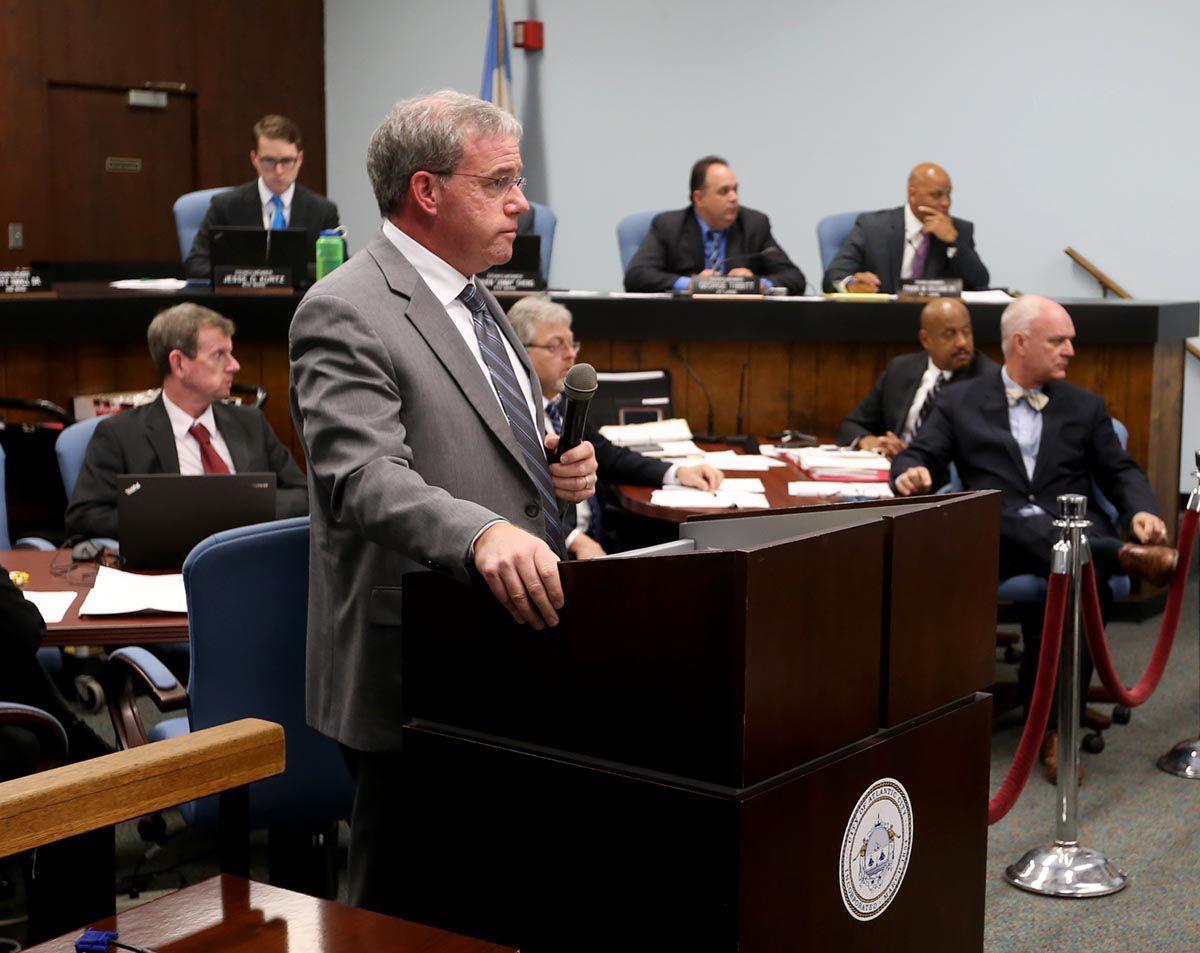 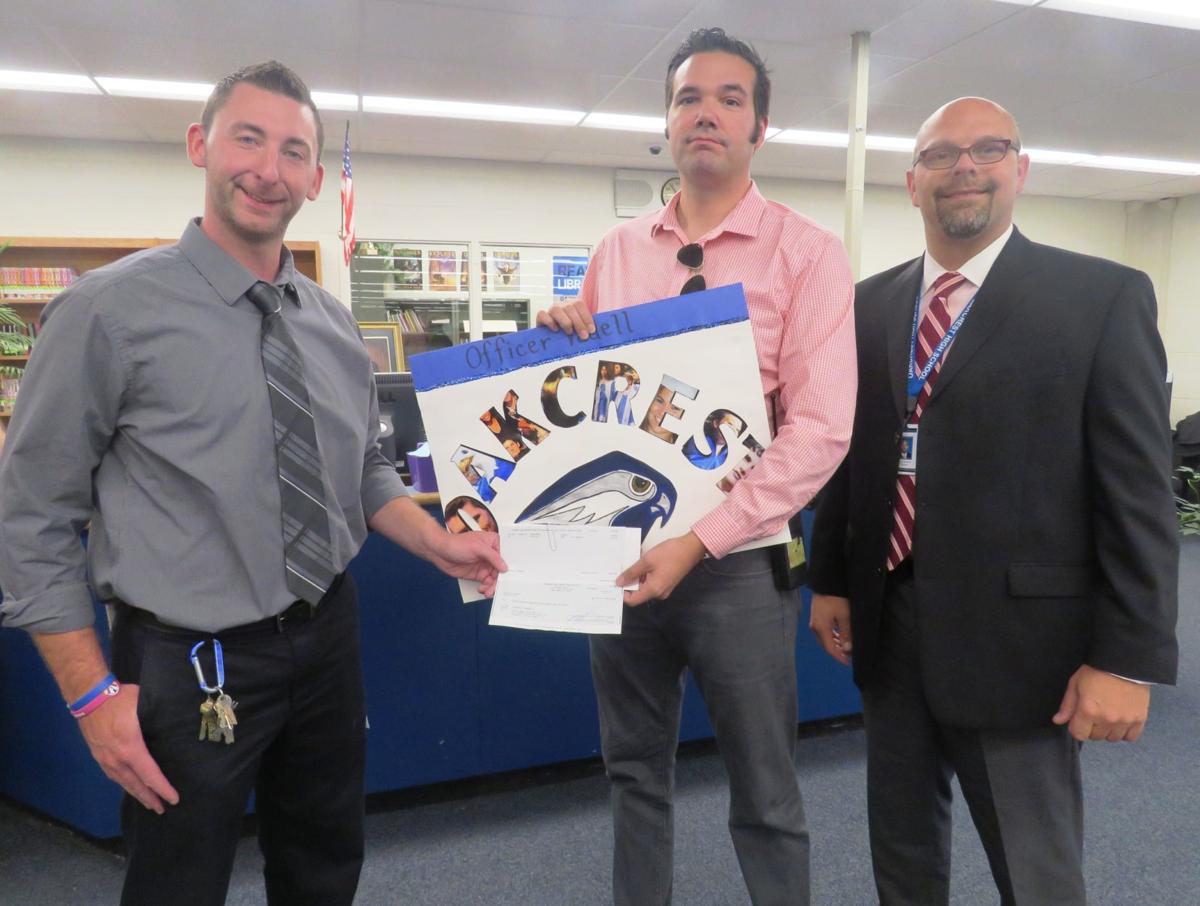 Matt Rogers, center, president of the Atlantic City Police Officer’s Benevolent Association Local 24, accepts a check for $575 from Oakcrest High School media teacher Jason Thomas, left, on behalf of the faculty and staff at the school. The group raised the money to assist in the recovery of Atlantic City Police Officer Joshlee Vadell, who was shot and critically injured Sept. 3. Joining them in the check presentation is Oakcrest Principal James Reina.

ATLANTIC CITY — The state moved to unilaterally change union contracts for the city’s police officers even as it awaits a ruling on whether it can proceed with similar cuts to the city’s firefighters.

The state’s plan cuts salaries, eliminates some benefits and changes the officers’ health care plan, according to letters sent to officers and city officials from Jeffrey Chiesa, the state’s point man in Atlantic City.

The letters were dated Monday but weren’t received by the city until Tuesday, according to copies obtained by The Press of Atlantic City. State offices were closed Tuesday due to the winter storm. The changes take effect Wednesday.

Matt Rogers, president of the city’s police union, PBA Local 24, criticized the timing of the letter, which he said he received Tuesday morning. Rogers, who said the PBA may take legal action, said his union couldn’t even file a lawsuit Tuesday because the courthouse was closed.

“On the day of a state of emergency, we were alerted we were going to be severely cut,” Rogers said. “It’s absolutely punitive.”

State spokeswoman Lisa Ryan said the letter was sent after the union stepped away Monday from “reasonable and fair solutions” to the city’s budget crisis.

“The fact is that for every day changes aren’t made, it costs the city thousands of dollars,” she said.

ATLANTIC CITY — Through 97 days, the state had little to show for its takeover of the city’s…

But the state is in court over the changes to the firefighters’ contract. Superior Court Judge Julio Mendez still hasn’t issued a ruling on whether those cuts can proceed while a legal case against the state takeover advances.

“As you are aware, the City of Atlantic City is in severe financial distress,” Chiesa wrote. “Over the past two months, representatives of the director (of the Division of Local Government Services) and the City have tried to agree to modify the PBA contract in order to make it more affordable. Unfortunately, those efforts were not successful. The PBA leadership has been aware of the following changes since late December of 2016.”

The changes amount to cuts in compensation of up to 25 percent, Rogers said. The new schedule would make patrol officers work 12-hour days, up from the current 10-hour shift, he said.

In addition, Rogers said the state eventually wants to cut the Police Department’s staff from 274 to 250.

“This is what the fight against the state takeover was all about, the trampling of collective bargaining rights,” Small said. “This is exactly what we were trying to avoid.”

Mayor Don Guardian said he was shocked by the news because as of Monday, the negotiations between the union and the state seemed to have been going well.

“I find the position the state has taken very unfortunate,” Guardian said. “The cuts to police are being made by people who don’t live here and don’t know the day-to-day operations of the city.”

Guardian said he expects the union to file a lawsuit.

He pointed out that one state entity, the Casino Reinvestment Development Authority, is considering adding 15 more Class 2 officers to patrol Pacific Avenue while another state entity, the Department of Community Affairs, is going to cut officers.

The so-called takeover law gave the state authority to amend or break union contracts, among other powers, to fix the city’s finances.

NORTHFIELD — Atlantic County is taking steps to overturn the state takeover of Atlantic City and the PILOT bill.

ATLANTIC CITY — State overseer Jeffrey Chiesa said Friday that lawsuits against him are no more than “money grabs” by public safety unions.

ATLANTIC CITY - The state can move forward with plans to slash Atlantic City firefighters' pay and benefits, according to a ruling from Superi…

For A.C. firefighters, a familiar fight over staff, benefits cuts

ATLANTIC CITY — The legal battle between the city’s firefighters and state overseers is just the latest tussle over cuts to the Fire Department.

ATLANTIC CITY — The state has hired a high-ranking city official to help in its takeover of the city’s finances.

ATLANTIC CITY — The city and Atlantic County are still fighting over $4 million.

ATLANTIC CITY — Jeffrey Chiesa will make $400 an hour as he heads a state takeover of the city, according to a state retention agreement.

ATLANTIC CITY — For the past three decades, the Casino Reinvestment Development Authority has been at the center of development funding in the…

State to veto $3,000 gifts to Atlantic City MUA board members

ATLANTIC CITY — The state will use its new power over the city to veto the water authority’s decision to give its board members $3,000 gifts.

ATLANTIC CITY — In rejecting this city’s plan to avoid a state takeover, a state official spent much time on another road map to recovery, one…

Matt Rogers, center, president of the Atlantic City Police Officer’s Benevolent Association Local 24, accepts a check for $575 from Oakcrest High School media teacher Jason Thomas, left, on behalf of the faculty and staff at the school. The group raised the money to assist in the recovery of Atlantic City Police Officer Joshlee Vadell, who was shot and critically injured Sept. 3. Joining them in the check presentation is Oakcrest Principal James Reina. 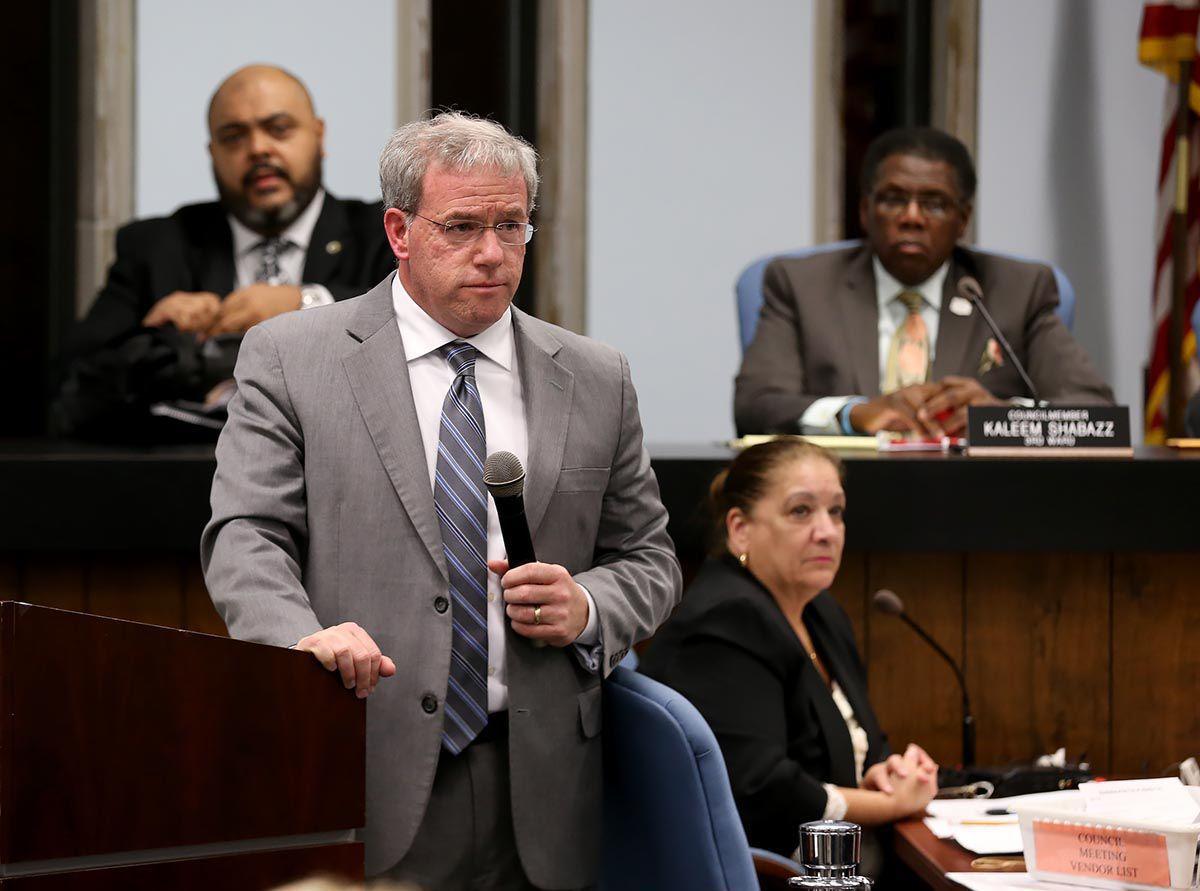