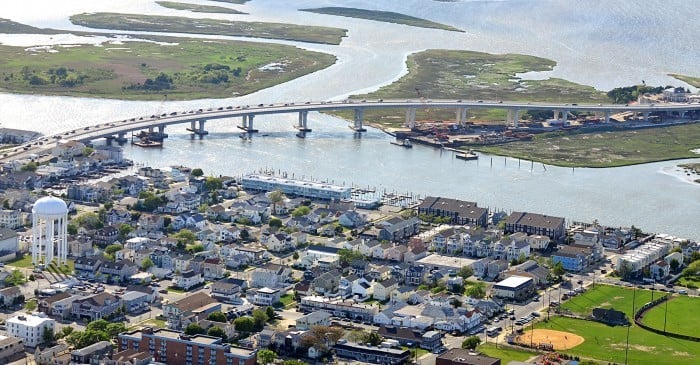 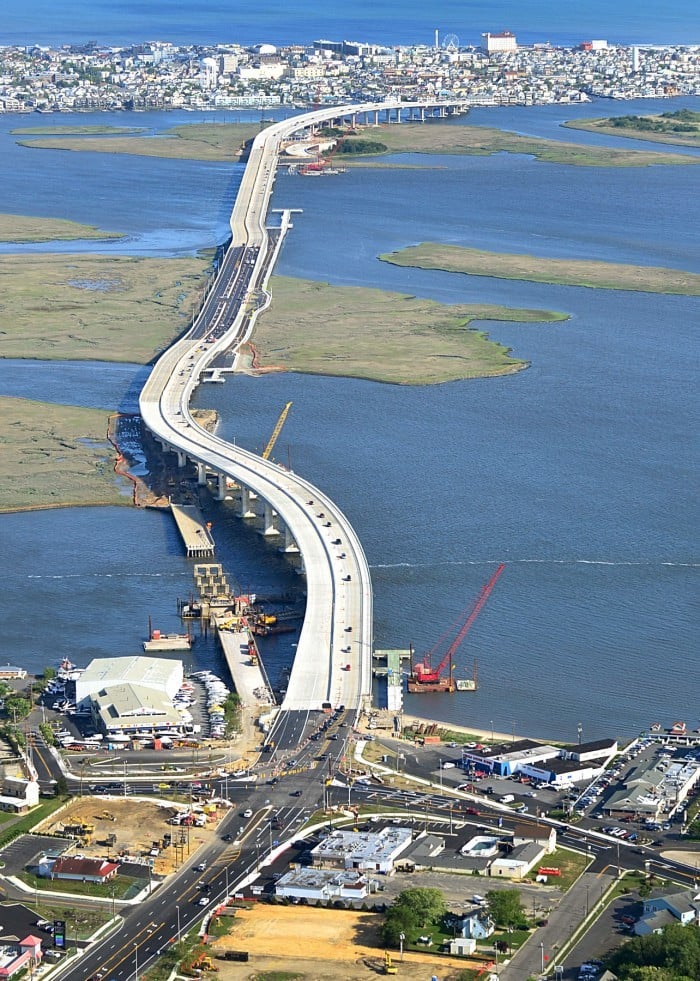 An engineer looks at the span and sees a modern marvel of steel, concrete and rebar that spans two miles of the Great Egg Harbor Bay.

An average driver looks at the new Route 52 causeway and sees a better way to and from Ocean City — a badly needed replacement for a crumbling old bridge.

“It was dangerous, it was narrow, it was bumpy, it was brutal,” said Gregory Kelchner, of Bay Avenue in Ocean City.

The entire $500 million Route 52 project is the most expensive ever for the New Jersey Department of Transportation, and it’s much more than just a bridge. Its aesthetics and amenities make it an attraction on its own.

“This is a once-in-a-lifetime project,” said Frank Inverso, project manager for the DOT.

All four lanes of the new bridge opened Tuesday, the primary milestone since construction began in the summer of 2006. The final elements of the project will be completed by December, on time, as originally planned.

Exactly a century has passed since the first wooden bridge was built over the bay to Ocean City. It was replaced in 1933 by the concrete structure that stood until recently, having been mostly demolished and trucked away during the past few years.

The new span largely traces that same route, retaining the S-curve on the way into the island that was originally necessary to avoid conflicting with now long-gone trolley trestles on Eighth Street.

Over time, Ocean City grew in popularity as a summer resort, and more boaters started using the Intracoastal Waterway and needed the drawbridges to open.

Two drawbridges on the old span opened an average of 3,250 times per year, as many as 22 times a day in the summer, according to the DOT. Boaters had to call the drawbridge operators ahead of time to be let through, and often had to wait.

When it was too hot, the bridges got stuck open, causing long traffic backups — as many as 40,000 cars cross the bridge each day in July and August — until the fire department came and hosed down the over-heated metal.

That wasn’t just annoying — it was dangerous.

The causeway is the primary evacuation route for Ocean City. It did little good during powerful storms, when waves would overtop its railings.

Official discussions on replacing the bridge began in 1992, and more than a dozen alternative ideas for the project were considered over the years. The plan eventually chosen was meant to minimize the impact on private property and the sensitive tidal environments surrounding the bridge.

The new fixed spans will each be 55 feet above the water, permitting nearly all boats that would normally travel through the drawbridges to pass safely underneath.

Lanes have been expanded from 10 to 12 feet each, with shoulders of 5, 8 and 11 feet in width where there were originally none. Those changes are projected to reduce accidents by 20 percent.

The bridge is 2.2 miles long, but the entire project is 2.8 miles in length, from Route 9 in Somers Point to West Avenue in Ocean City. Other road improvements, making up $35 million of the total project, included widening MacArthur Boulevard in Somers Point, replacing the Somers Point circle with a signalized intersection and raising Ninth Street in Ocean City to prevent flooding.

And then there’s everything on the sides of the roadway, with dramatically improved pedestrian and bicycle access and unprecedented opportunities for fishermen, boaters, birdwatchers and tourists of all kinds.

Shared walkways will stretch the length of the bridge, making it safe to walk from Somers Point to Ocean City for the first time when they fully open later in the summer. Along that path there are four fishing piers, two boat ramps, several scenic outlooks and a visitors center that provides an unparalleled view of the bay from its second level.

“It really is another location that’s recreational,” said Michele Gillian, executive director of the Ocean City Chamber of Commerce, whose new offices will be located in the new visitors center. “It provides a whole new look at Ocean City. ... We’ll really be highlighting the bay.”

The two fishing piers that are already opened were filled with fishermen on a recent sunny afternoon. The bridge has been known as a good fishing location for years, because of its deep channels, but there was little access.

“Any spot that people can get to with good parking, without having to search for, they’ll just flock to,” said Jay Caldwell, of Mays Landing, an employee at Tackle Direct on Tilton Road in Egg Harbor Township.

The bridge’s view will be beautiful during the day, but it is intended to be part of the scenery at night.

Underneath the bridge’s highest arches are rows of LED lights that will shine downward on piers, creating unique lighting effects because of the piers’ “bow tie” shapes.

It hardly needs to be said that much more planning went into making the structure look picturesque.

“The old bridge was ugly. Did you see it?” said Dave Lambert, DOT director of bridge engineering and infrastructure management. “It looked like Stonehenge.”

Nevertheless, the former bridge, formally called the World War Memorial Bridge, was historic, and pieces of it will be on display near the new bridge and in local museums.

But in comparing the two bridges, there is no comparison.

“There are a million different things that make this better,” Kelchner said.

Discover the details and the numbers on the new Route 52 bridge.