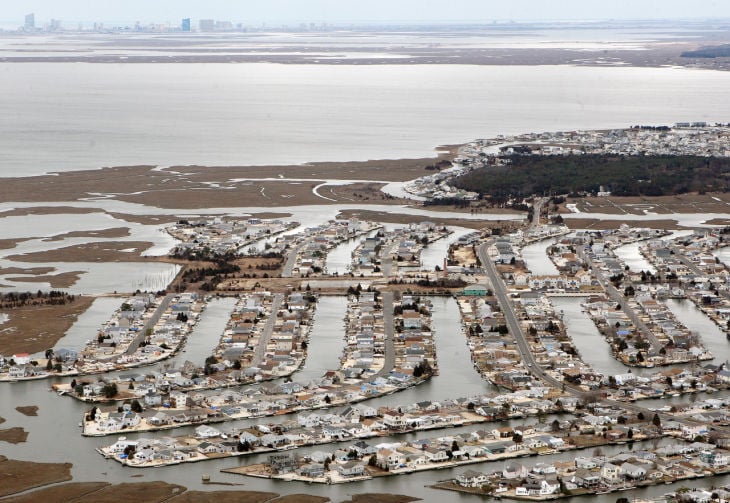 Many homes were destroyed by Sandy on Mystic Island 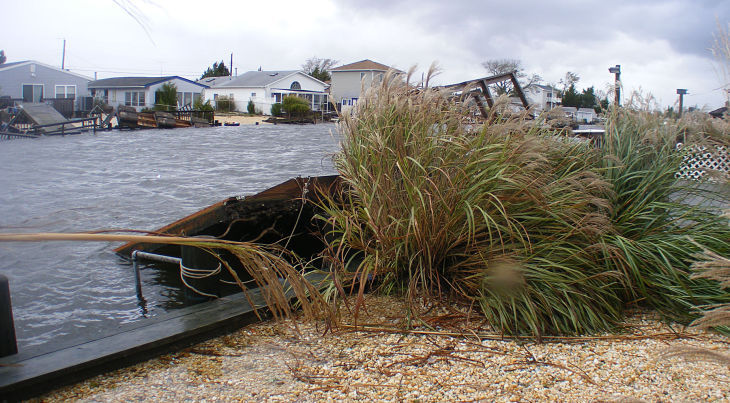 Hurricane Sandy proved the Jersey Shore is not invincible and the sea level is still rising, so a quiet discussion has been building over the past 18 months about depopulating the coast.

Some New Jersey residents and officials are adamant: Retreating from the coast is not going to happen — this is a salty-water culture that will not succumb to fear of another storm.

Others, however, are still shell-shocked and undecided about staying near the water.

Garrett Smith, of Franklin Park, Somerset County, is one of those homeowners who has a newfound fear of the water that flooded his home during Sandy.

Smith retired a few years ago and planned on making his summer home of 37 years in the Mystic Island section of Little Egg Harbor Township his full-time residence.

Smith hired a builder to demolish his Susquehanna Drive home and rebuild, but the 66-year-old retiree is still concerned that the water will come over the bulkheads or roads.

“Twenty years ago during a storm, I had 8 inches of water, but that wasn’t a constant — it only happened one time. This time, I got 41 inches of water in the house.”

His land is now assessed at $150,000. His house, more than half of which was damaged, is assessed at $35,000, he said. He said he has his retirement money to rebuild, but he recently received a notice in the mail from a builder asking to buy his property.

“I get scared about going forward because I don’t know what is going to happen. I’m on the fence as to whether to rebuild or retreat. I love it down there, but I’m afraid they’re going to say no one is rebuilding, and I hate to pay $300,000 to build a home and then be told that no one can live there,” he said.

Mayor Arthur Midgley knows that many of the residents in Mystic Island who were flooded out during Sandy never went home, but for those who did and others who stayed, he said he doesn’t see signs of retreat from the water.

Most of the homeowners who suffered storm damage and are staying are rebuilding on piling, and the people who are demolishing are holding onto the property and waiting to sell, Midgley said.

He said he is confident that, over time, people will buy up the vacant properties on the water and rebuild.

“They’re not making more waterfront. I think people will always want to live at the shore and on the water. This is something that hopefully won’t happen again for another 100 years,” he said.

The U.S. Army Corps of Engineers is examining the big picture and looking at a range of structural and nonstructural strategies to address flood risks, including property buyouts, corps spokesman Stephen Rochette said. The $19.5 million North Atlantic Coast Comprehensive Study is underway by the corps and is due to Congress in January.

“We’re looking at a lot of different things right now and a broad big picture. It’s a collaborative effort between the corps, NOAA, government agencies and researchers,” Rochette said.

Rochette said the corps is not typically charged with depopulation procedures, but in terms of assessing certain areas, it could be something that is part of the larger plan.

After Hurricane Katrina, the corps developed a multibillion-dollar plan to depopulate large portions of the Gulf Coast with the idea that the creation of a natural barrier would protect the region against devastating flooding events in the future.

Retreating from the waterfront and other vulnerable coastal regions is an option that should be taken seriously, said Michael Kennish, a research professor for the Institute of Marine and Coastal Sciences at Rutgers University.

“Retreating is something that needs to be looked at. When people built these homes, they weren’t looking at sea levels rising, but in the last 50 years that has changed. If you’re going to defend and want to live in these places, you have to put in the infrastructure,” Kennish said.

For residents, leaving the waterfront is two-pronged, he said. The homeowner feels the possibility of threats to people and property, as well as a threat of financial collapse because of the cost to live there.

Since Sandy, Kennish has worked with New Jersey towns where flooding is an issue. Locally, he has worked with Tuckerton, Little Egg Harbor and Stafford Township, towns that had flooding problems in low-lying areas well before Sandy.

It makes a lot of sense for homes constructed in a marsh habitat that were lost due to flooding not to be rebuilt, he said.

“I think people are doing that now and are not going back to salt marsh areas to live after the storm. We’re not talking about what scientists are saying; we’re also talking about the cost of rebuilding. There will be significant increases in costs to live in these environments,” he said.

In areas such as the oceanfront of Atlantic City, there is no option to move casinos, so protection will come from the construction of 22-foot dunes and sea walls, he said.

“When you look at the shore area, there is overwhelming concern in defending the homes on the oceanfront because the ocean is such an ominous body of water. But the bays really have not been the focus of all of this. If you look at flooding damage there, it was very significant,” Kennish said.

Long Beach Township Mayor Joseph Mancini said there is no way that people will retreat from Long Beach Island and leave the oceanfront — Sandy didn’t scare them that much, he said.

The township is preparing for future storms and protecting homes by building sand dunes along the oceanfront, Mancini said. Long Beach Township also just recently passed an ordinance raising the height of bulkheads by 2 feet, he said.

“The island has $15 billion in ratables. That’s a hell of a lot of ratables, and I don’t see anyone retreating. Our real estate market in the last six weeks is about as robust as I’ve seen it since 2008. Properties are selling, and inventory is down,” he said.

The forecast shows serious flooding in areas where there are manmade lagoons because the communities were built very close to sea level, Kennish said. The bayshore areas don’t have dunes to protect them like the oceanfront does, he added. There are bulkheads, but they are not contiguous and not high enough, he said.

“These areas will have to look at other options like sea walls,” he said. “There will be the raising of homes and roads, bulkheads and sea walls.”

Many homes were destroyed by Sandy on Mystic Island