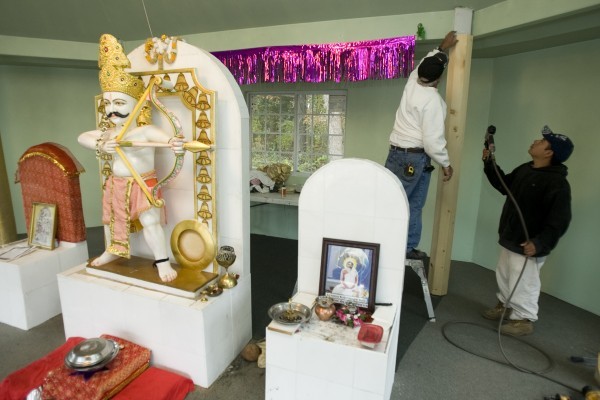 Onelio Desousa of Somers Point , left Sabeno Garca of Atlantic City, right work on gazebos serve as mini-temples for some of the hundreds of gods Indian Hindus worship at Hindu Temple of South Jersey in Galloway Friday, Oct 23, 2009. 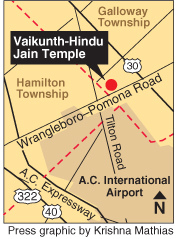 GALLOWAY TOWNSHIP - Construction continued Friday at the Vaikunth-Hindu Jain Temple, despite the dark sky threatening rain that would end work for the afternoon.

Workers have completed four of 10 free-standing worship structures slated for the seven-acre compound.

Temple leaders decided to build the outdoor mini-temples to accommodate the gods members want to worship beyond the 15 deities already stationed in the main, 11,850-square-foot temple, according to Cannon Ghelani, who goes to the temple and has been involved in planning the exterior buildings.

"They ran out of room. There are hundreds of different gods in the Hindu faith," Ghelani said Friday. "So ... they built gazebo structures outside, to let people worship quickly and move on."

The $2.5 million Vaikunth-Hindu Jain Temple was the region's first Hindu worship hall. It opened in 2001.

The pressing need to expand worship space speaks to the continued growth of the Indian population locally and statewide: Indian immigrants are three times as likely as new arrivals from other countries to live in New Jersey, according to 2008 statistics from the U.S. Department of Immigration and Naturalization.

But the expanding scope of regions represented among the succeeding waves of Indian immigrants is not connected to whether shrines to deities are placed within the main temple or an external gazebo at the compound in Galloway, according to Kishor Ghelani, Cannon Ghelani's father and one of the key players in the original project. Kishor Ghelani also is overseeing the current initiative.

The temple picks which gods to honor with their own worship centers based on requests from members and the amount of money donated toward building costs for a gazebo for a specific deity, Kishor Ghelani said.

"In India, I've seen them and I based the design on that," he said Friday. "But I have not seen a whole lot in the United States."

Each gazebo centers around one of the hundreds of gods worshipped by Hindus. The design reflects the characteristics of that deity, Ghelani said.

For example, Ghantakarna Mahavir hates the cold, Ghelani said. So the worshippers of the bow-and-arrow-equipped protector of the faithful and virtuous pay their respects on green carpet, surrounded by white-sided walls, beneath a crystal chandelier sparkling in natural light flowing through windows and a sliding-glass front door.

The rest of the structures will be open-air, such as the recently completed, tiled worship center dedicated to Shiva, the god of the yogis and the self-controlled who represents death and destruction in general as well as bad habits.

HAMILTON TOWNSHIP — A 69-year-old man was found dead Thursday after being trapped underneath a car, Detective Michael Tantum said.

Now, a member of the Board of Education is leveling the accusations against other elected board members.

Girl assaulted on her way to school in Pleasantville

PLEASANTVILLE — A child was assaulted on her way to school Thursday, and police are looking for a suspect.

A Galloway Township woman was indicted on animal cruelty charges after she abandoned five dogs in a wooded area near North Pitney Road, acting…

GALLOWAY TOWNSHIP — The multimillion-dollar proposed project known as Pomona Commons will not move forward at this time, and the status of the…

BRIDGETON — A city man was sentenced to 45 years in prison for killing a Vineland man in 2017, the Cumberland County Prosecutor’s Office said …

Onelio Desousa of Somers Point , left Sabeno Garca of Atlantic City, right work on gazebos serve as mini-temples for some of the hundreds of gods Indian Hindus worship at Hindu Temple of South Jersey in Galloway Friday, Oct 23, 2009.