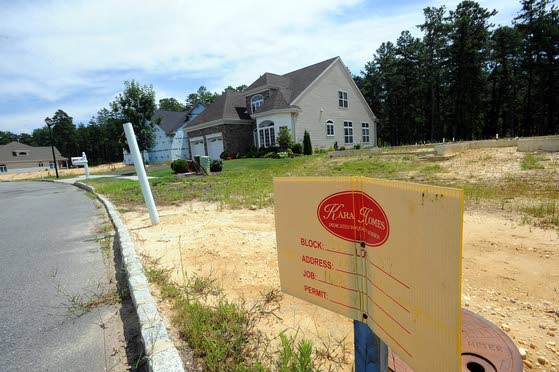 Empty lots and unfinished homes in the Horizons at Woods Landing 55-and-over development in Mays Landing have convinced township officials to reluctantly back off on requirements made of the previous failed developer. 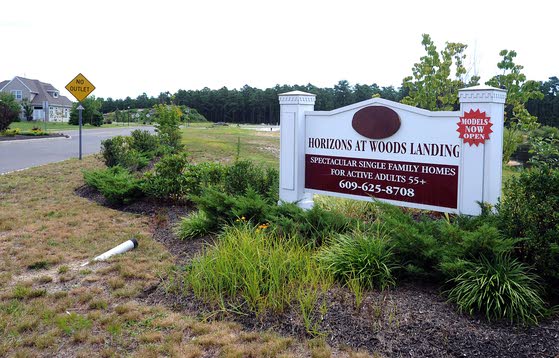 Horizons at Woods development in Mays Landing. A new developer is taking up the unfinished development. Friday August 07 2009 (The Press of Atlantic City/Anthony Smedile ) 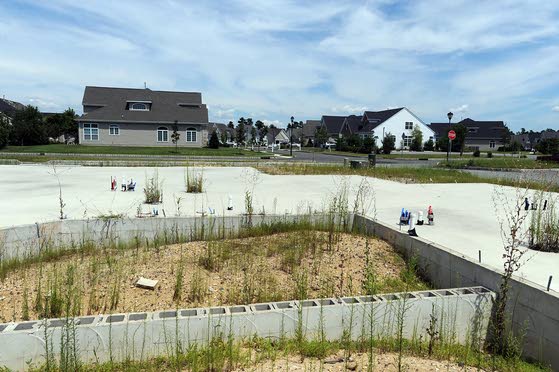 An unfinished foundation sits across from homes in the Horizons at Woods Landing development in Hamilton Township.
By THOMAS BARLAS, Staff Writer, 609-272-7201

HAMILTON TOWNSHIP - The clubhouse for the Horizons at Woods Landing age-restricted development here won't be as luxurious as originally planned.

Residents won't have as many paths on which to walk and there will be fewer trees to shade them from the sun. And the township will eventually have to repair stretches of some roads that were to be upgraded by the developer as part of the project.

But the township is making concessions on these types of requirements to help a new developer complete construction of the neighborhood, which has sat half-finished since Kara Homes filed for bankruptcy in 2006.

"When housing was going great guns and they were achieving substantial profits, (developers) were willing to commit to improvements they could make economically," Planning Board Chairman Gordon Dahl said. "When the housing prices weren't what they were three or four years ago, the economics of the project are different. It changes the whole dynamics of what a board can ask for and what developers are willing to pay."

Home resales have fallen 38 percent and sales of new homes have tumbled 76 percent since the real estate boom in 2005 and 2006. Construction of homes and apartments have skidded 79 percent. And for the first time in more than four decades of record keeping, home prices have posted consecutive annual declines.

And even though signs indicate the housing market is stabilizing, local governments are dealing with developers looking to finish projects as inexpensively as possible.

The Hamilton Township Planning Board on Thursday agreed to allow a new developer - Lakewood-based Fenmoor Homes at Woods Landing - to build the final 106 homes. The board granted Fenmoor, a contract purchaser working with the bank that foreclosed on Kara Homes, most of the cost-cutting measures Fenmoor said it would need.

Some Planning Board members cast their votes reluctantly. While they did not want to discard hard-won agreements with Kara Homes, they also understood that allowing Fenmoor to save some money by reducing the scope of the work was necessary to get tax-producing projects such as this one completed during bad economic times.

Still, it's not something everyone likes.

"Fair share on the pavement," Planning Board member Henry Dorsey said about possibly getting Fenmoor to pay for some road-paving work. "Did I hear that? I guess not. We're trying to give away too much."

And Planning Board member William Christman said allowing Fenmoor to cut more than 1,700 plants, shrubs and bushes from a landscaping plan developed after a year's worth of negotiations with Kara Homes is hard to accept: The final tally imposed on Kara Homes was to upgrade land that was cleared of trees without proper approval.

"The issue of those trees is very serious," he said.

Dahl said it's a matter of being realistic.

"You have a developer here who apparently has a good track record," Dahl said of Fenmoor. "We don't want to punish him for an agreement made in other economic times. There is an absolute benefit for the residents of this project and to the township. There is a clear economic and environmental benefit to proceeding with this, knowing that we still met the ordinance standards."

Horizons at Woods Landing wasn't the only project stymied by Kara Home's bankruptcy. Work on other Kara Home developments, including some in Ocean County, also came to a halt.

In Stafford Township, Ocean County, Kara Homes was developing The Landings at Manahawkin until the company's bankruptcy in 2006. Now it looks as though completion of the project may be on the horizon.

From the Garden State Parkway, motorists could see construction that was once booming suddenly at a standstill. The development was like a ghost town - no doors on the fronts of the homes and rows of unfinished units. Since Maplewood Homes assumed control of the development in October 2007, the roads have been cleaned up and landscaping completed, and a small crowd of residents lounged Saturday afternoon by the pool.

After Kara Homes went bankrupt, the U.S. Bankruptcy Court for the District of New Jersey transferred control of 12 Kara-related projects to Maplewood Homebuilders, including two in Little Egg Harbor Township as well as The Landings.

Once the community is finished, it will have 197 homes.

Prices are lower than they were when Kara Homes was in control, according to Pam Jablonski, sales manager for Maplewood Homes. Prices of the townhomes and condos range from $259,990 to $299,990.

Jablonski said she still has about 10 inventory homes left over from Kara for sale. And the homes are selling - just not as quickly as Jablonski would like. Since taking over, Maplewood is responsible for selling 70 of the homes.

"The economy has been difficult, and the whole market is totally changed. Kara was the first of all the builders to go under because they spread themselves too far," she said.

Margaret Shank-Knap is one of Horizon at Woods Landing's first residents, moving into her Lewis Drive home in April 2005.

Shank-Knap said one of the development's main selling points was the clubhouse, a facility important to age-restricted communities because of the social atmosphere it creates. She is still waiting for the clubhouse to be built.

"Over-55 communities usually start with the clubhouse and the pool," she said.

Robert Murie lives near Horizons at Woods Landing and said the project needs to be finished.

"It's an eyesore and a hazard," Murie said of some undeveloped sections. "I would like to see a reasonable party coming and finishing this so the (residents) can live with closure."

Fenmoor attorney Steve Nehmad said the company wants to start the work as soon as possible, even though "residential construction has literally ground to a halt."

Fenmoor sought relief from items such as street repair, landscaping and pedestrian walkways because completing those items as originally planned "makes it extraordinarily difficult from an economic standpoint to allowing this company to move forward," Nehmad said. Planning Boards can consider economics to some degree when considering projects, he said.

"Times have changed since this project was approved in good economic times," said Mayor Nelson Gaskill, a Planning Board member.

While Fenmoor, the township and the Horizon at Woods Landing residents association still must wrap up some details regarding the project, local officials and people living in the development are feeling better that the project will be finished.

That includes Shank-Knap, who is still waiting for her community center.

Staff writer Donna Weaver and the Associated Press contributed to this report.

Kara Homes built 143 homes for the age-restricted community before filing for bankruptcy in 2006. Hamilton Township's Planning Board on Thursday granted some cost-cutting concessions to help the new developer, Lakewood-based Fenmoor Homes at Woods Landing, finish the project and build the remaining 106 homes. Some of the concessions allow Fenmoor to:

A Somers Point man fighting for his life after setting himself on fire last week is a U.S. Army veteran under treatment for mental health issu…

GALLOWAY TOWNSHIP — The multimillion-dollar proposed project known as Pomona Commons will not move forward at this time, and the status of the…

BRIDGETON — A city man was sentenced to 45 years in prison for killing a Vineland man in 2017, the Cumberland County Prosecutor’s Office said …

Empty lots and unfinished homes in the Horizons at Woods Landing 55-and-over development in Mays Landing have convinced township officials to reluctantly back off on requirements made of the previous failed developer.

Horizons at Woods development in Mays Landing. A new developer is taking up the unfinished development. Friday August 07 2009 (The Press of Atlantic City/Anthony Smedile )

An unfinished foundation sits across from homes in the Horizons at Woods Landing development in Hamilton Township.
© Copyright 2021 The Press of Atlantic City, 1000 West Washington Ave. Pleasantville, NJ | Terms of Use | Privacy Policy
Powered by BLOX Content Management System from TownNews.com.
You don't have any notifications.