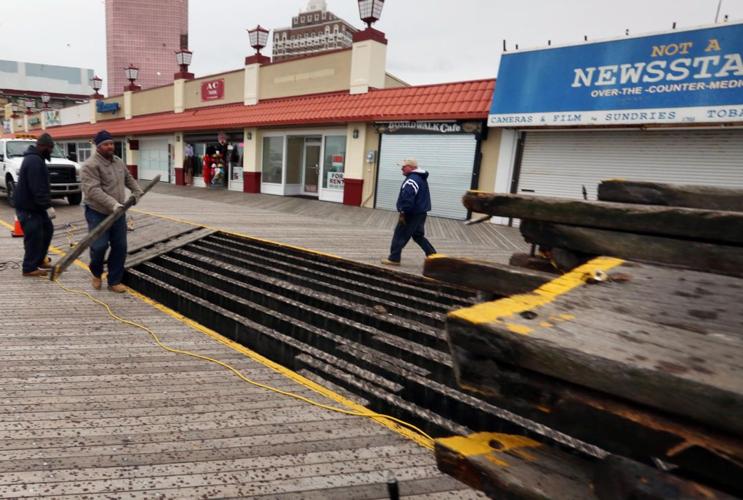 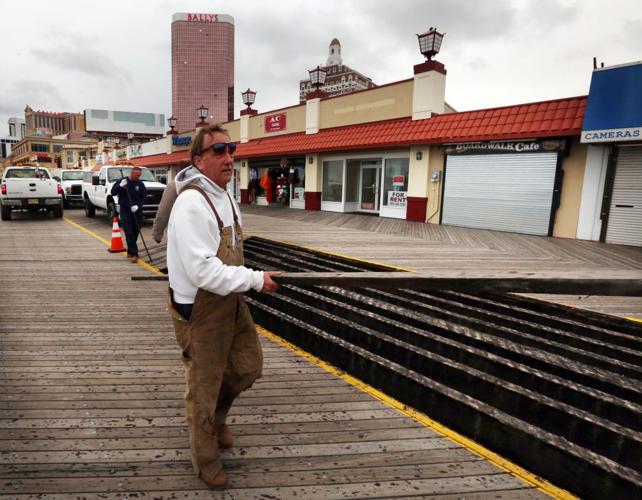 George Tittermary Superintendent of Beach and Boardwalk along with his crew makes repairs to Atlantic City Boardwalks at Martin Luther King Blvd. for the summer season Wednesday, April 227, 2016. 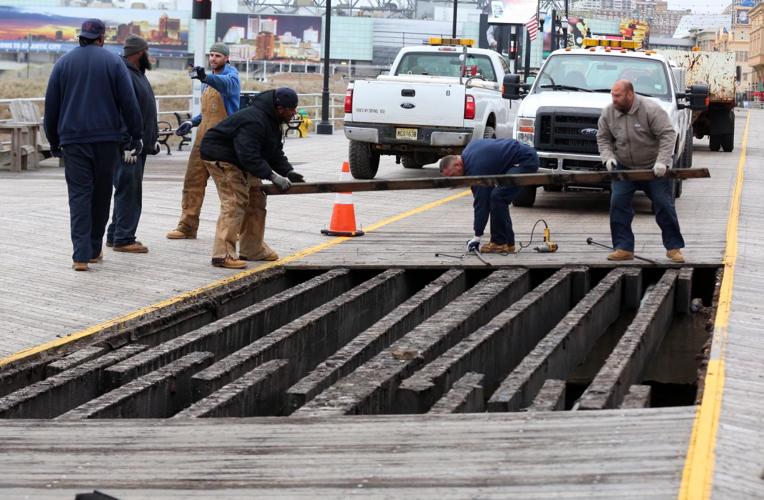 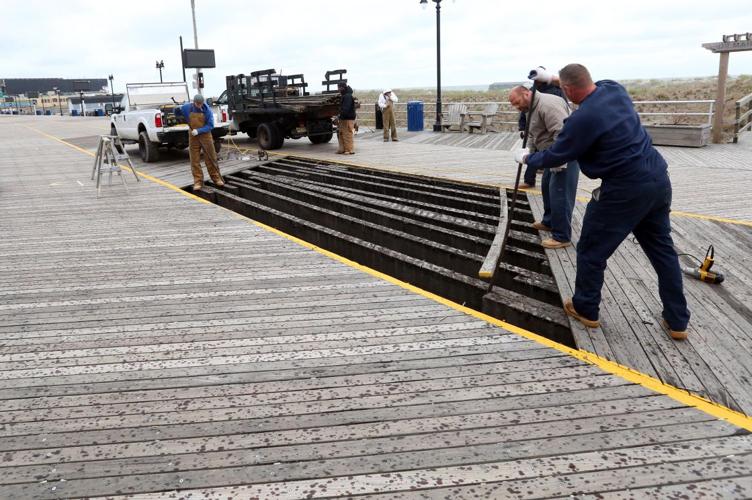 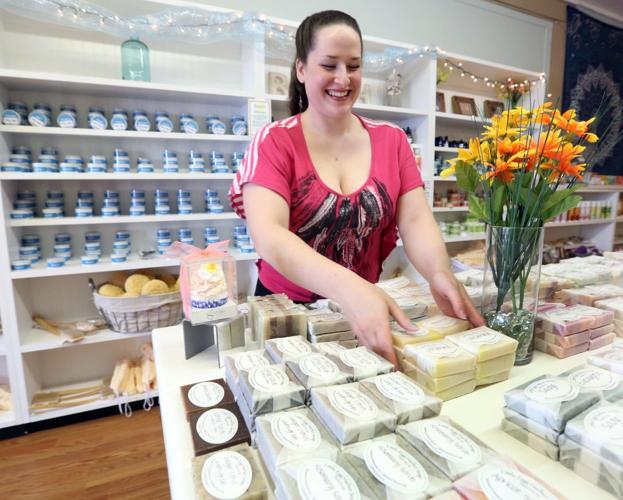 Sky Notaro, 22 of Egg Harbor Township manager of LEH Soap (Little Egg Harbor Soap) set up their display of soap at the Ocean City Boardwalk store Wednesday, April 27, 2016. The story is focusing on new attractions and businesses on the boardwalk this year. 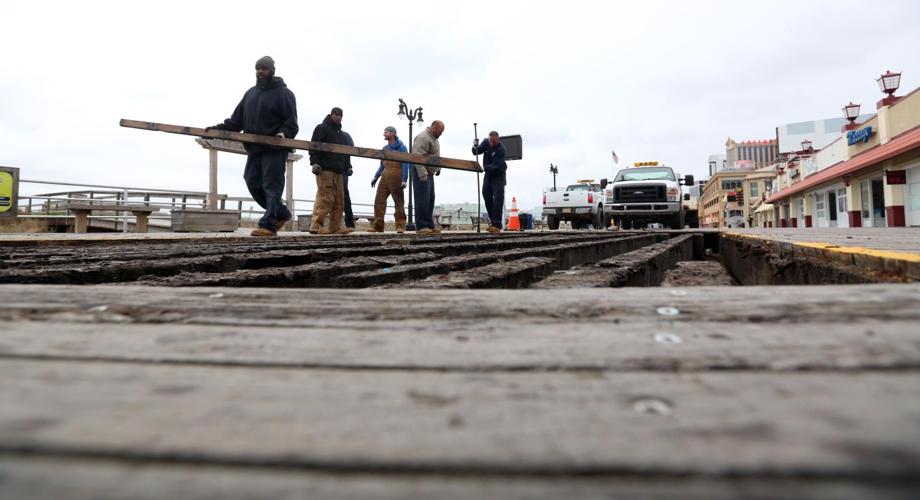 NORTH WILDWOOD — Joe and Darlene Ballantine, of Wildwood Crest, stopped their bikes on the Boardwalk on a sunny afternoon.

“We ride down the Boardwalk and get a slice of pizza at Mack’s,” Darlene Ballantine said. “Then you ride back into the wind to work it off.”

Beach towns spend the offseason making repairs both big and small to get ready for millions of visitors and the clarion call of “watch the tramcar, please.”

“We see them making minor repairs all the time. They do it every day,” she said.

“All the guys in my department take pride in taking care of the Boardwalk. It’s a big team effort,” he said.

“They’re the meeting place, the favorite gathering places,” she said.

According to tourism figures, Wieland said two-thirds of the 12.5 million visitors to Cape May County last year strolled a boardwalk during their stay. That’s more than 8 million people enjoying the views, the rides, the food, the shopping and the spectacle of the boardwalks.

Which South Jersey boardwalk do you think is best? Atlantic City? Wildwood?

Wieland said boardwalks are becoming more year-round attractions just as beach towns are. The Ocean City Music Pier and Wildwoods Convention Center host events that draw people to the boardwalks throughout the year.

“There’s something about the sights, sounds and aromas – the smell of the popcorn. It takes you back. Even the creosote of the piles,” she said. “I was born and raised in Wildwood and spent many hours on the Boardwalk and beach. Something triggers that nostalgia to go back.”

North Wildwood is considering rebuilding entire portions of its Boardwalk in 2017 or 2018, Ford said. In the meantime, workers inspect the deck virtually every day to make repairs as needed, he said. Some of its oldest sections of concrete date to the 1930s, he said.

This year has been busier than normal because of Winter Storm Jonas, he said.

The city had to make bulkhead repairs and spent weeks cleaning up storm debris and unclogging drains.

Often a single loose board will reveal deteriorating joists the need replacement, he said.

The city received a $5 million state Economic Development grant last year for Boardwalk renovations, and it budgets about $1 million per year to maintain its beaches and Boardwalk. The city keeps a store of Brazilian hardwood at its lumberyard for use on the Boardwalk. Ocean City and North Wildwood prefer yellow pine.

A comparatively snow-free winter made for easier maintenance on the Boardwalk this year, he said.

Ocean City is in the third year of a five-year, $10 million plan to replace the entire Boardwalk and substructure between Fifth and 12th streets.

This is the heart of Ocean City’s Boardwalk, home to the Music Pier concert hall and the amusement parks Gillian’s Wonderland Pier and Playland’s Castaway Cove.

The city is replacing the Boardwalk in sections during the offseason. Work began just after Columbus Day last fall and continued through February to ensure the Boardwalk was back open for the popular Easter parade.

Ocean City’s Boardwalk, too, has to hold up to lots of use, from the annual Miss New Jersey parade to car shows and festivals.

Its Boardwalk is virtually undeveloped on the ocean side, providing a 180-degree view of the beach and Atlantic Ocean.

But Bergen said the city is seeking permission from the state Department of Environmental Protection to build new gazebo-like pavilions on the oceanfront side of the Boardwalk like the one at 11th Street. The city is asking to build them at Sixth, Seventh, Eighth, Ninth and 10th streets to provide shade for people who want to sit, enjoy an ice-cream cone and admire the ocean views.

“Our beach and Boardwalk are the tandem that defines Ocean City,” Bergen said. “Really, the Boardwalk is what sets it apart from the other beach towns in South Jersey.”

WILDWOOD -- Firefighters doused a blaze at a home on West Youngs Avenue on Thursday.

CAPE MAY – Assignment Judge Julio Mendez presided over the naturalization ceremony for 30 new immigrants Tuesday at Congress Hall, a historic …

A beach badge is as essential as sunscreen and a towel in most shore towns. This year, Sea Isle City, Longport and Ventnor are joining Atlanti…

MIDDLE TOWNSHIP — Township police are warning the public about a possibly rabid fox that was seen a couple times this week in Reeds Beach.

Coast Guard to host second-annual community festival in Cape May

CAPE MAY – The U.S. Coast Guard will play host Saturday to the second-annual Community Festival at Training Center Cape May.

The 32nd annual Veterans Memorial Program will begin at 2 p.m. Friday, May 27 at the Atlantic County Veterans Cemetery located in the county p…

OCEAN CITY — Gillian’s Wonderland Pier will raise money for CASA for Children of Atlantic and Cape May Counties on July 25, by selling special…

You don’t need ID to vote in Cape May County, but you do need it if you want to complain in person to the candidates you elected.

Cop, teacher plan to walk from Atlantic City to San Francisco for veterans

To raise money for veterans, a math teacher and a police officer from Indianapolis plan to take a walk tomorrow in Atlantic City – a long walk.

George Tittermary Superintendent of Beach and Boardwalk along with his crew makes repairs to Atlantic City Boardwalks at Martin Luther King Blvd. for the summer season Wednesday, April 227, 2016.

Sky Notaro, 22 of Egg Harbor Township manager of LEH Soap (Little Egg Harbor Soap) set up their display of soap at the Ocean City Boardwalk store Wednesday, April 27, 2016. The story is focusing on new attractions and businesses on the boardwalk this year.