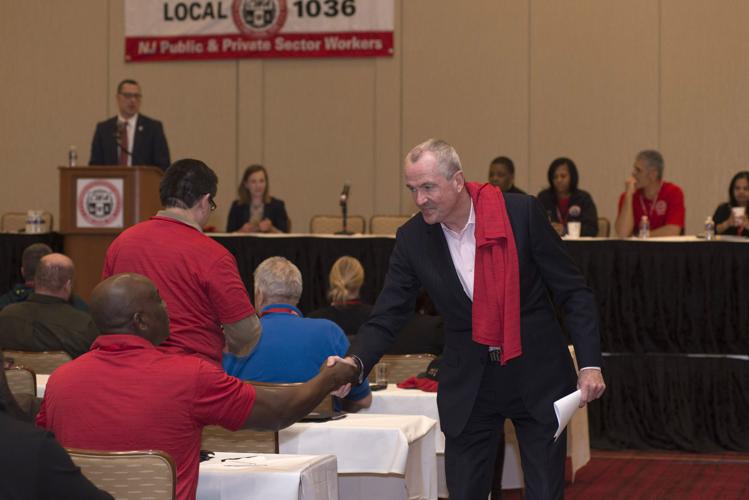 Democratic Gov. Phil Murphy told CWA members gathered Monday at the Harrah’s Resort Conference Center they need to be ‘partners in turning state government around.’ He thanked them ‘for what you do for the people of New Jersey.’ 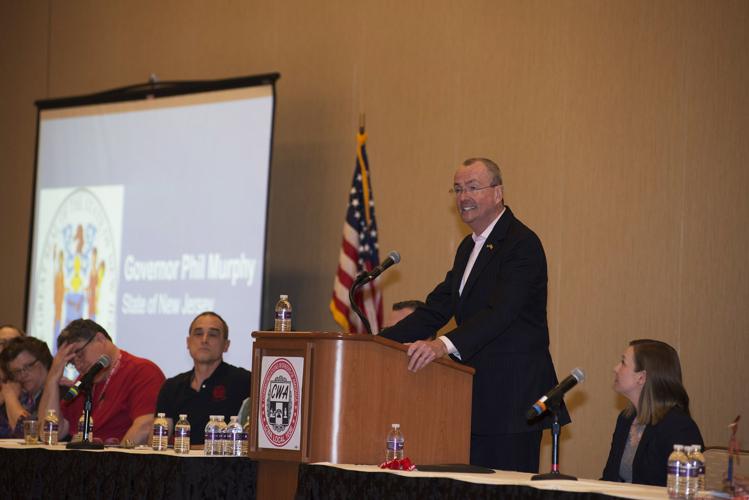 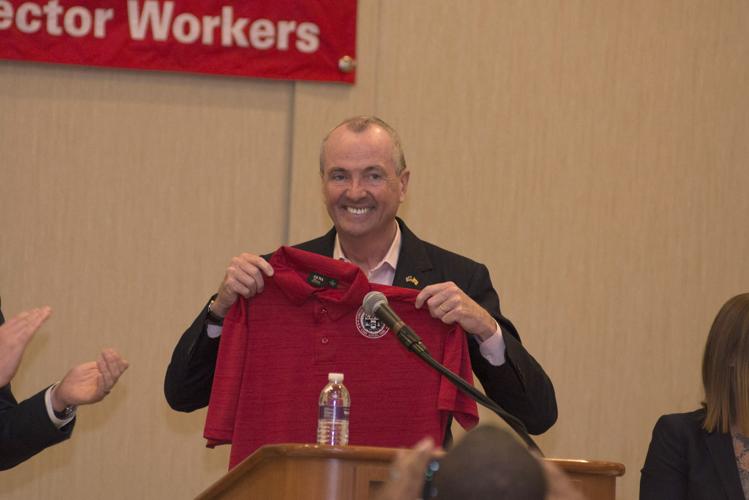 On March 26 2018, Governor Phil Murphy speaks at the 8th annual CWA Local 1036 Shop Steward Leadership Conference, held at the Harrah's Casino Convention center in Atlantic City. The Governor holds up a CWA shirt just given to him. 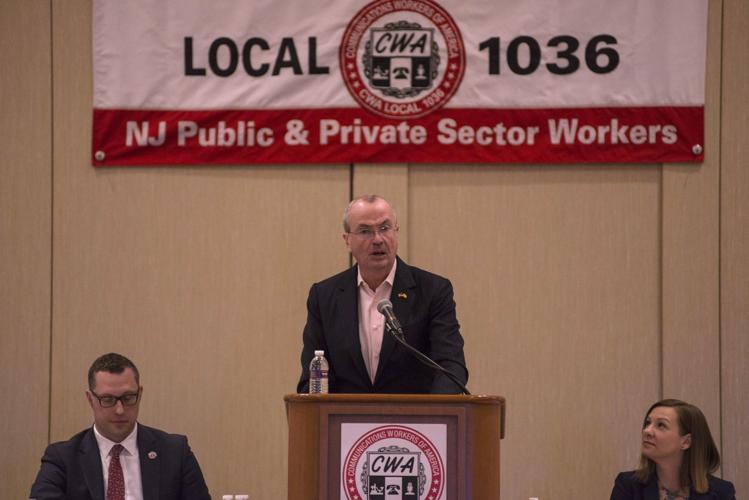 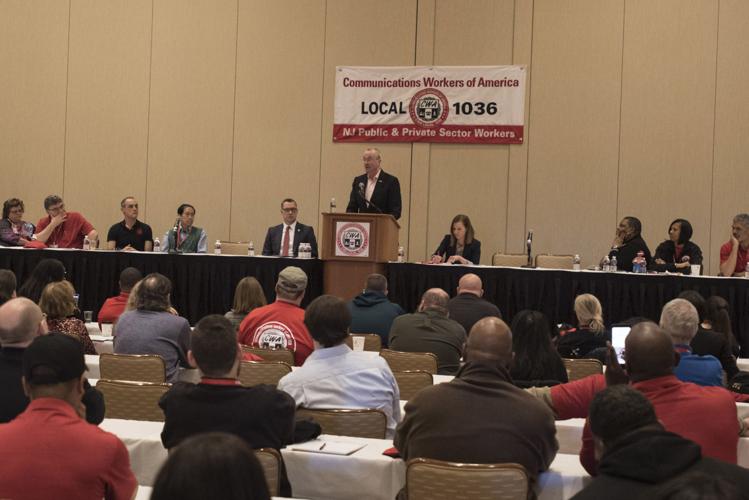 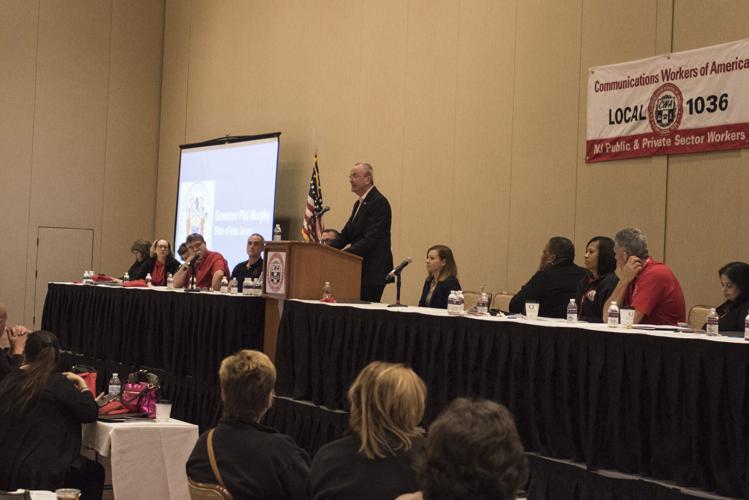 ATLANTIC CITY — After years of a contentious relationship with the Governor’s Office, the state’s largest union apparently has an ally in Trenton.

“I know how the last administration treated you,” Gov. Phil Murphy told attendees during the eighth annual Communications Workers of America Local 1036 Shop Steward Leadership Conference at the Harrah’s Waterfront Conference Center on Monday afternoon. “That era of disrespect ended at noon on Jan. 16. And as long as I’m governor, it’s not coming back.”

Murphy, a Democrat, was referring to the public battles his predecessor, Republican Gov. Chris Christie, had with the CWA during the previous eight years.

The most recent example was a ruling by the state Supreme Court that sided with the union after the Public Employment Relations Commission decided local governments were not obligated to make milestone salary increases during lapses in contracts even though explicit contract language guaranteed it.

CWA’s contract with the state expired in July 2015. Murphy made no mention Monday of ongoing contract negotiations between his administration and the labor union, which represents nearly 7,000 members in the public and private sectors, including the Atlantic County Prosecutor’s Office and various municipal government units in the county.

Murphy chastised the approach by the previous administration of “short-sighted budgeting practices” at the expense of public employees. He said CWA members have been asked “to do more with less” during the past eight years.

“I am committed to working with my cabinet to ensure we meet both the needs of our residents and the needs of your specific departments,” he said.

Under Christie, wage increases for state workers averaged less than 1 percent a year, and he pushed for several pension and health care reforms that required larger contributions by the public employees.

“(We) cannot continue down the path of simply hollowing out essential offices in the name of politics and somehow expecting better results,” Murphy said. “Our former governor wanted to be the next (Gov.) Scott Walker. You can see in Wisconsin how well that’s worked out.”

Murphy told CWA members Monday they “must be part” of the state’s “renewal” and “partners in turning state government around.” He also thanked them “for what you do for the people of New Jersey.”

“I know it’s been a while since you’ve heard that from a governor, but you just did,” he said.

Adam Liebtag, president of CWA Local 1036, could not immediately be reached for comment.

Murphy plans to spend $1.5B tax hike, do little for NJ finances

The record $37.4 billion state budget proposed this month by Gov. Phil Murphy counts on $1.5 billion in new and higher taxes in a state alread…

Free college proposal from Gov. Murphy has fans and foes

MAYS LANDING — Matthew Williams decided to start his education at community college because it was affordable.

Murphy, Oliver scheduled to be back in Atlantic City Tuesday

Democratic Gov. Phil Murphy told CWA members gathered Monday at the Harrah’s Resort Conference Center they need to be ‘partners in turning state government around.’ He thanked them ‘for what you do for the people of New Jersey.’

On March 26 2018, Governor Phil Murphy speaks at the 8th annual CWA Local 1036 Shop Steward Leadership Conference, held at the Harrah's Casino Convention center in Atlantic City. The Governor holds up a CWA shirt just given to him.