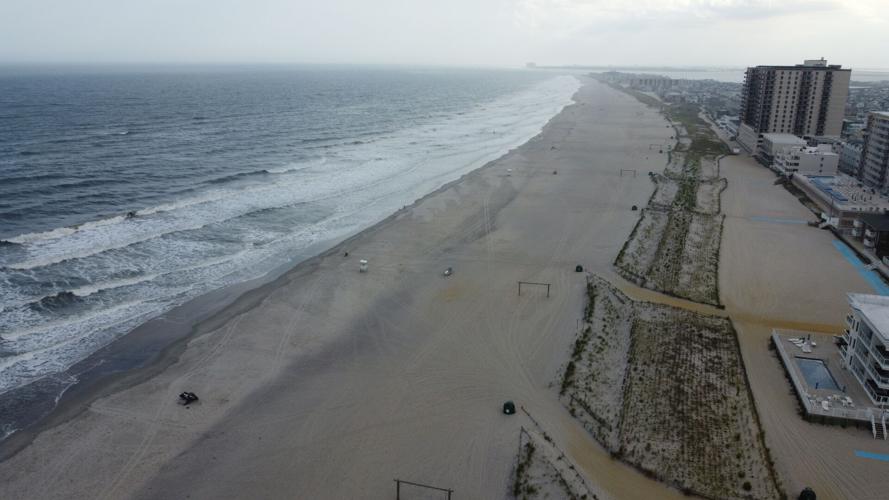 Temperatures in the 90s on the mainland drove people to the beach in Margate and other shore towns last week seeking relief, but when they arrived they were surprised to find chillier than normal ocean water. 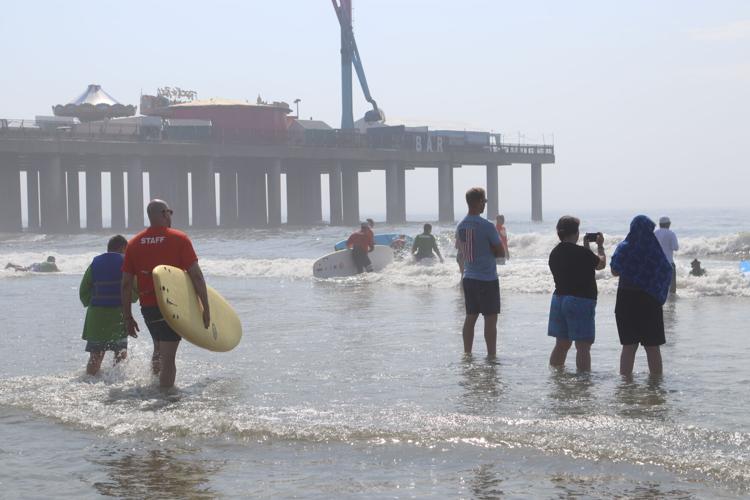 More than 100 families participated in the Heart of Surfing event last Sunday on the Atlantic City beach, during a heat wave that nevertheless saw ocean temperatures in the 50s and 60s.

ATLANTIC CITY — Those flocking to the area’s beaches in order to beat the oppressive heat may be in for a shock.

Despite the high heat last week, water temperatures dipped into the 50s, meaning that although you were sweating on the beach, if you went to take a quick dive in the ocean to cool off, you would walk out of it shivering.

“I walked out, put my feet in the water and then said, ‘I’m definitely not going in today,’” said Laurie Jenkins, of Atlantic City. “But at least it’s still a nice day to sit out here and enjoy the beach.”

It seems like the trend of chilly ocean temperatures has carried over into this week because as of Friday morning, despite it being 80 degrees inland, the ocean temperature in Atlantic City was a bone-chilling 56.8 degrees, according to the National Oceanic and Atmospheric Administration’s tides and currents website.

The colder ocean temperatures are expected to continue through the weekend.

Most people have seemed content sitting under an umbrella or lying in the sand for now, but the colder than usual water has not deterred some people from enjoying the Atlantic Ocean.

Jeremy Anderson, of Quebec, Canada, who came to the resort for a weeklong vacation with his family, spent some time in the ocean and thought, at least for a short period, the water felt pretty nice.

“It’s definitely pretty chilly once you first stand in it, but once you get fully into it, your body will get used to it and it isn’t too bad,” Anderson said.

Anderson does recommend that you don’t spend too much time in it, though.

“Eventually you will start to feel cold again, and you’ll definitely feel the difference once you step back onto the sand where it is 20 degrees warmer,” he said.

Why is the ocean temperature so vastly different from the air temperature? The reason is called upwelling, which is when water that is near the sea floor is brought up to the surface.

Since the Earth is curved, water is not pulled in the same direction as wind, as it is pulled at about a 45-degree angle to the right of the wind direction. For upwelling to occur, from Long Beach Island all the way to Cape May, the winds need to be blowing south to southwest.

So far this month, 20 of the first 27 days met the wind direction criteria for upwelling, according to Sen. Frank S. Farley State Marina in Atlantic City.

Typically this time of year, the water temperature in Atlantic City is in the mid- to upper 70s, and the warmest it’s been so far this month was 75.7 degrees, which was recorded on NOAA’s tidal and currents website July 18.

Locals and tourists alike are hoping the water temperature will soon rise again but also are still finding ways to enjoy the beach.

“It’s tough with how cold the water is, especially for the kids because the first thing they want to do is jump right in and spend the whole day in it,” said Tatiana Rodriguez, of Brooklyn, New York, a mother of two boys. “But they are still having fun running around and playing in the sand, so they are making the best of it.”

Kimberley Watson, of Pleasantville, took advantage of a day off from work to come to the beach, and although she would like the water to be more comfortable, she enjoys spending the day sitting out there.

“I think the beach is the perfect place to come to just clear your mind,” Watson said. “Normally any time I come here, I take a dip in the ocean, but it just feels way too cold at the moment. I don’t mind kicking back in the sand, catching a tan and reading a good book though, so I really can’t complain. We still have a couple months of the summer left, and I’m sure the water won’t be like this forever.”

The third heat wave of 2022 may already be in the works. With inland 90s Tuesday and forecast 90s possible through Friday, we could be in one. Oh, and it'll be sticky too. The shore does get sea breeze relief, with cold ocean waters returning.

Two North Jersey men were arrested after a woman in Beach Haven received second-degree burns from a firework thrown from a passing car, author…

BRIGANTINE — A dredging project to deepen the entrance to St. George’s Thorofare is scheduled to commence on or about Aug. 8, city officials s…

Temperatures in the 90s on the mainland drove people to the beach in Margate and other shore towns last week seeking relief, but when they arrived they were surprised to find chillier than normal ocean water.

More than 100 families participated in the Heart of Surfing event last Sunday on the Atlantic City beach, during a heat wave that nevertheless saw ocean temperatures in the 50s and 60s.