Route 206 is closed to traffic north of Hammonton due to a wildfire in Wharton State Forest on Monday.

A map of the area affected by a wildfire burning in Wharton State Forest is posted on a New Jersey Forest Fire Service vehicle Monday in Shamong, Burlington County. 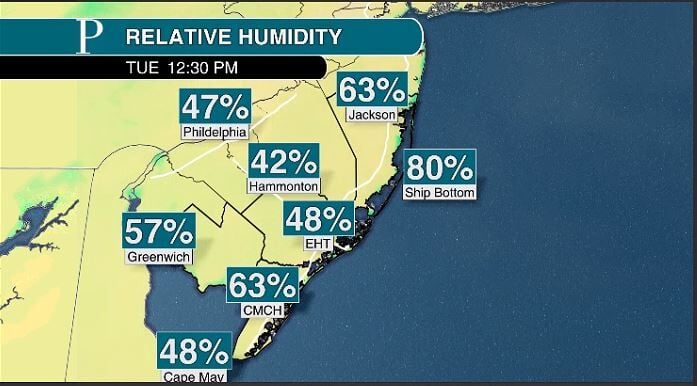 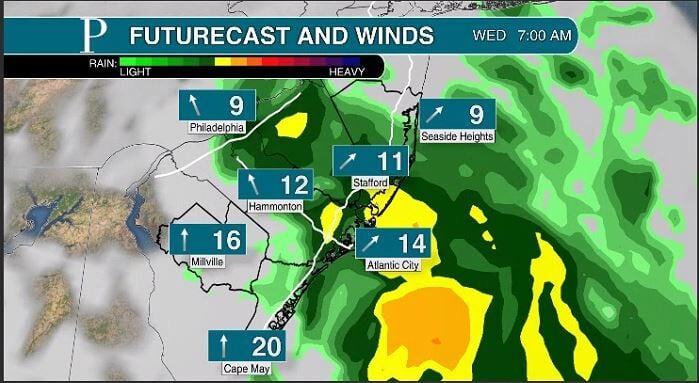 A fire burning in Wharton State Forest was 95% contained as of late afternoon Tuesday, and firefighters were confident it would not spread beyond perimeter lines they had created.

The fire is believed to have been caused by an illegal, unattended campfire in the woods, said Greg McLaughlin, chief of the New Jersey Forest Fire Service.

He said the fire had burned 13,500 of the 15,175-acre containment area that was set up around it. That estimate remained current as of late Tuesday afternoon.

Both firefighters and the state Department of Environmental Protection on Monday anticipated the fire burning through about 15,000 acres of land since its start Sunday morning, making it the worst state wildfire in more than a decade.

No one was injured, and none of the 18 structures threatened was damaged.

The blaze broke out at 10 a.m. Sunday and quickly spread to areas in Washington Township in Burlington County and Mullica Township in Atlantic County.

Wharton State Forest fire could be fully contained by Tuesday

A fast-moving fire in Wharton State Forest had destroyed more than 11,000 acres of woodlands…

“It was essentially a makeshift (camp) fire,” McLaughlin said. “We suspect that people were passing through, whether on the river or hiking. But we have ruled out natural causes.”

At least 50 people had to be evacuated from remote campsites within the forest that were only accessible by river or through hiking.

Pinelands Adventures has paused kayak and canoe trips, which will continue until further notice, the Fire Service said.

The fire was burning in a remote area of the forest where access is difficult because of the configuration of roads through the park, and the fact that many of them are pitted with holes that fill with water, slowing the progress of arriving firefighting vehicles.

The weekend of June 17-19 started out summery but by the time it wrapped up Sunday night, it…

Firefighters used 22 engines, a helicopter with a 325-gallon bucket and other equipment to battle the fire, which was expected to continue to spew smoke for several more days.

McLaughlin said Monday he expected the fire to be fully contained by Tuesday or Wednesday, adding that additional days would likely be needed to fully bring the fire under control. Rain showers are expected Wednesday, which may help the cause.

Local roads near the fire were opened Tuesday morning. Motorists traveling in the area should stay vigilant in case they reach heavily smoke-filled areas and encounter emergency vehicles working alongside the roads, the Fire Service said.

The blaze threatened nearly half the 40 historic structures in Batsto Village, a tourist attraction popular with hikers and canoers.

Firetrucks were stationed near those buildings as well as some private structures that were in the path of the fire to protect them.

Hiking trails in Wharton State Forest will continue to be off limits for several days until they can be inspected for any safety hazards.

LOWER TOWNSHIP — A new Overdose Response Team is being added to the township’s resources, expanding on its efforts to help recent overdose patients.

The over 13,000 acre Wharton State Forest Fire earlier in the week has generated interest across the country, including in the notoriously fir…

Steve Harbaugh — builder, philanthropist, dad — is creating a family-friendly entertainment destination in Mullica Hill, where he grew up.

Tourists stranded inside, outside Yellowstone amid record floods

"Cinder" is now safe at a veterinary clinic and will be eligible for release into the wild in about four months. Here's her story.

It'll be the same old song and dance from Friday into the weekend. Each morning will bring the potential for a killing freeze, with wildfire concerns in the afternoon, especially Saturday. Temperatures will finally warm into the 60s, though.

Unbelievable! This is the moment after a gunman opened fire in a crowd in Philadelphia

Route 206 is closed to traffic north of Hammonton due to a wildfire in Wharton State Forest on Monday.

A map of the area affected by a wildfire burning in Wharton State Forest is posted on a New Jersey Forest Fire Service vehicle Monday in Shamong, Burlington County.