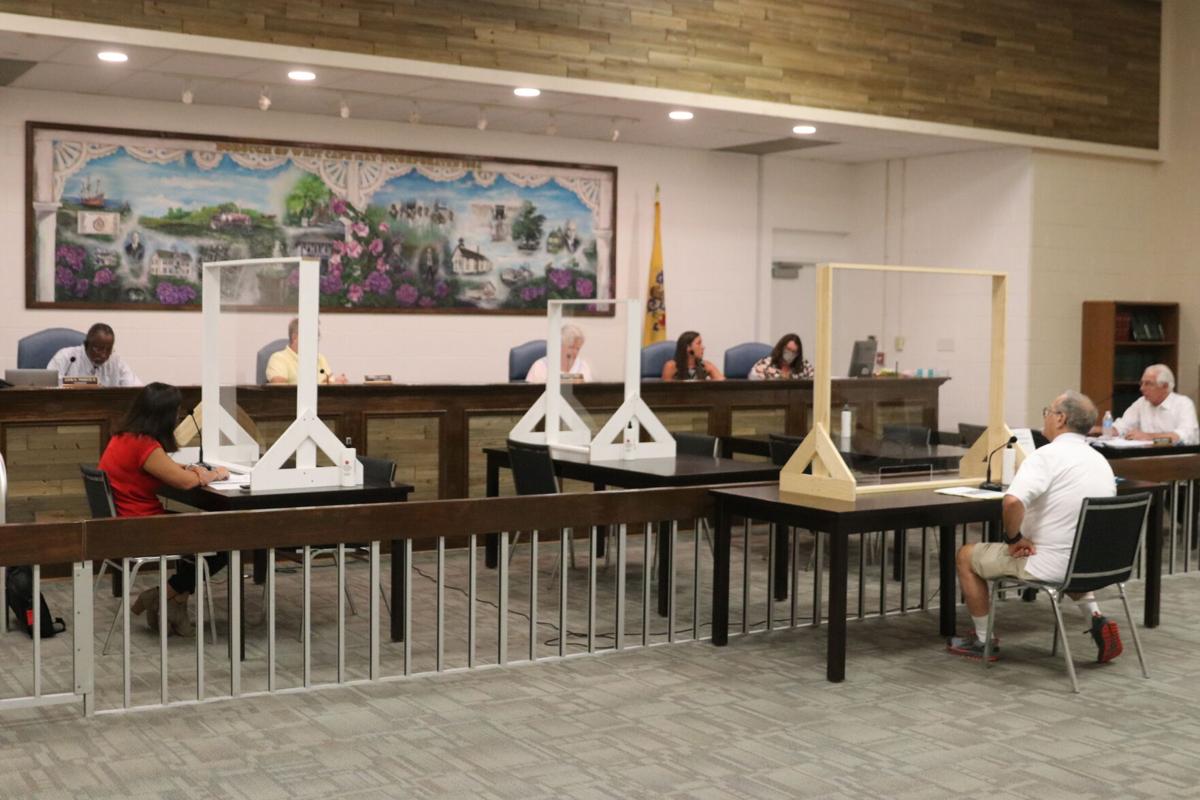 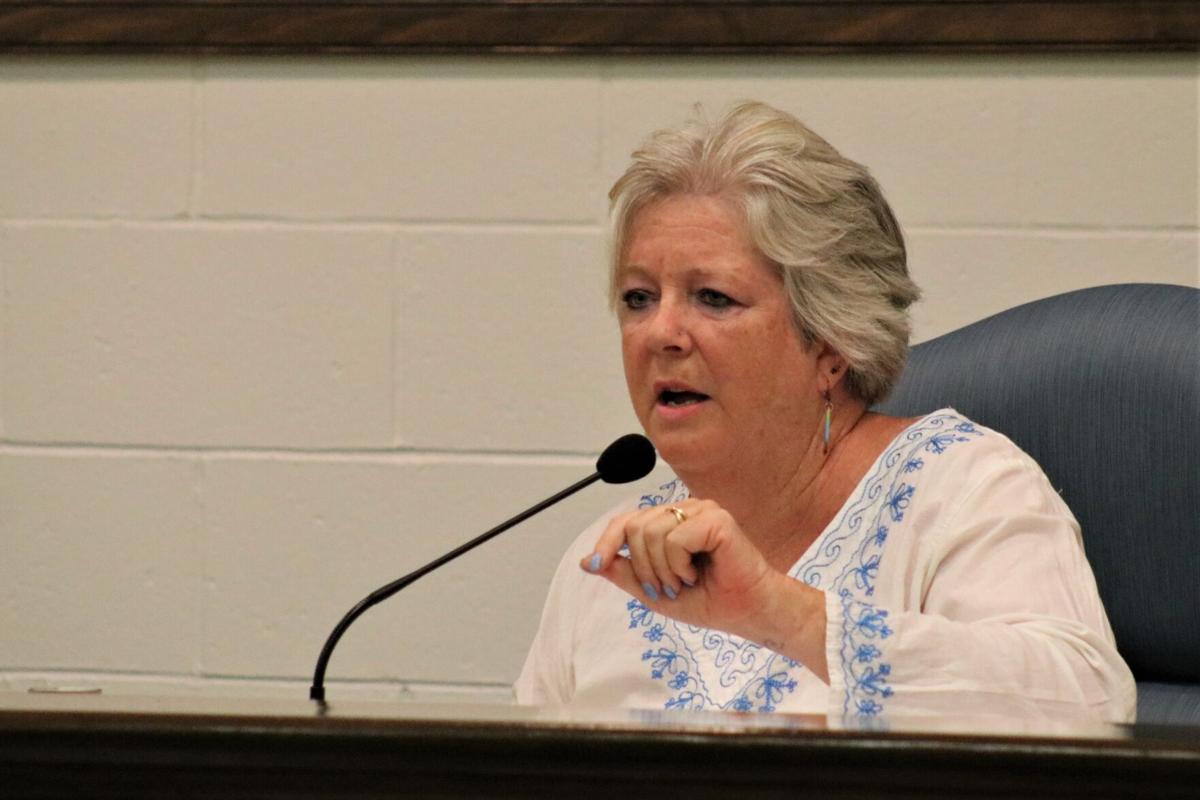 West Cape May Mayor Carol Sabo listens to speakers for and against allowing cannabis sales in the borough. On Wednesday, she and the two other commission members unanimously approved an ordinance allowing sales and cannabis growing, citing the potential revenue. 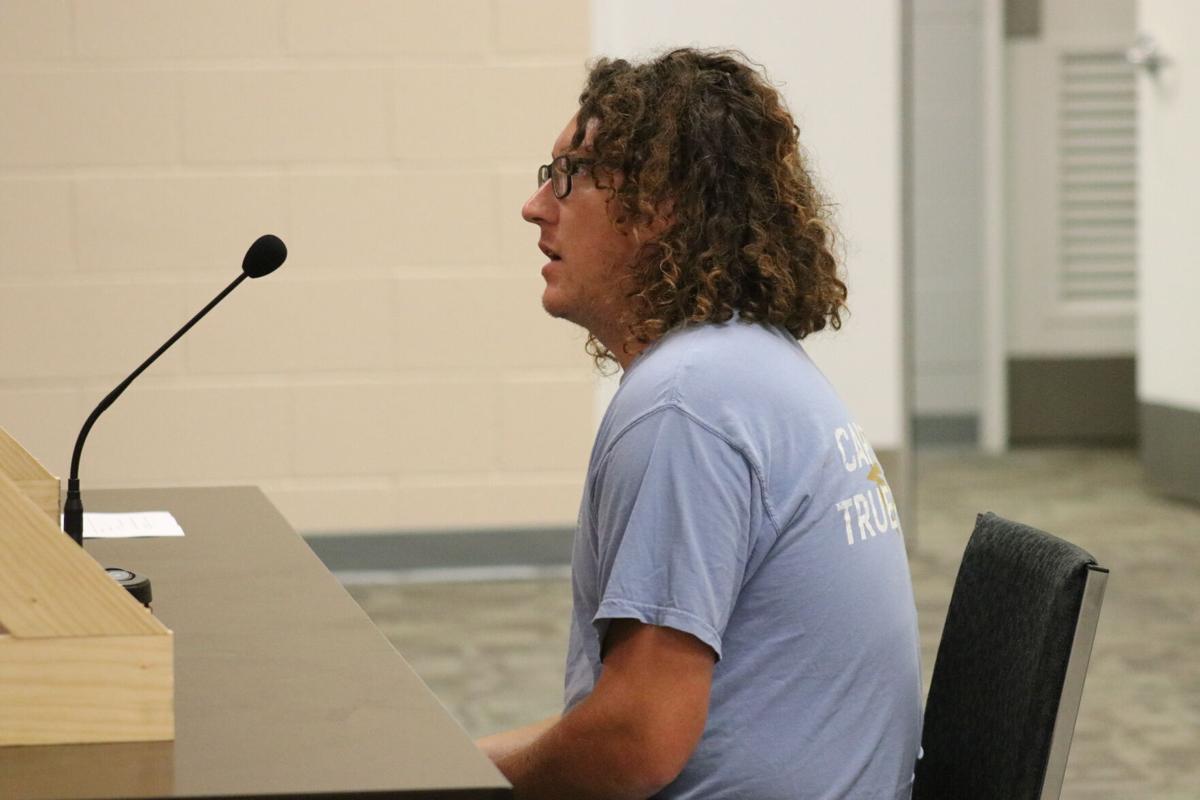 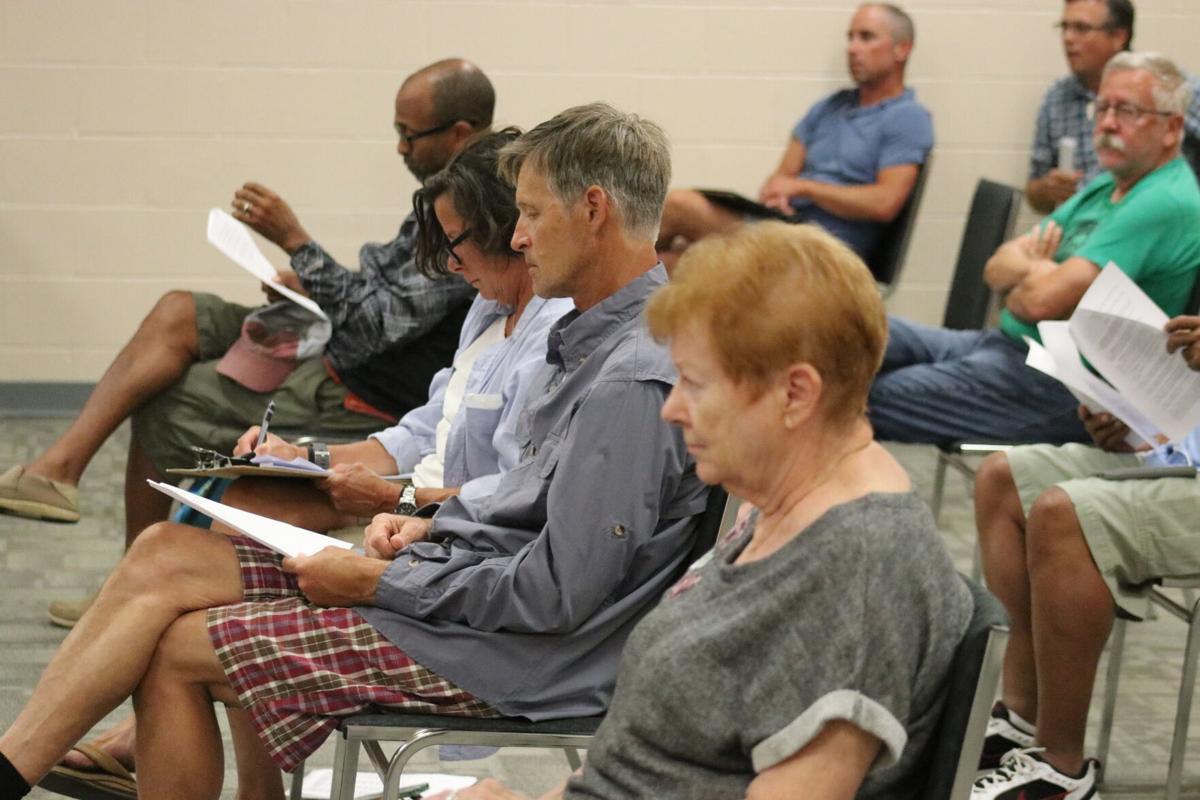 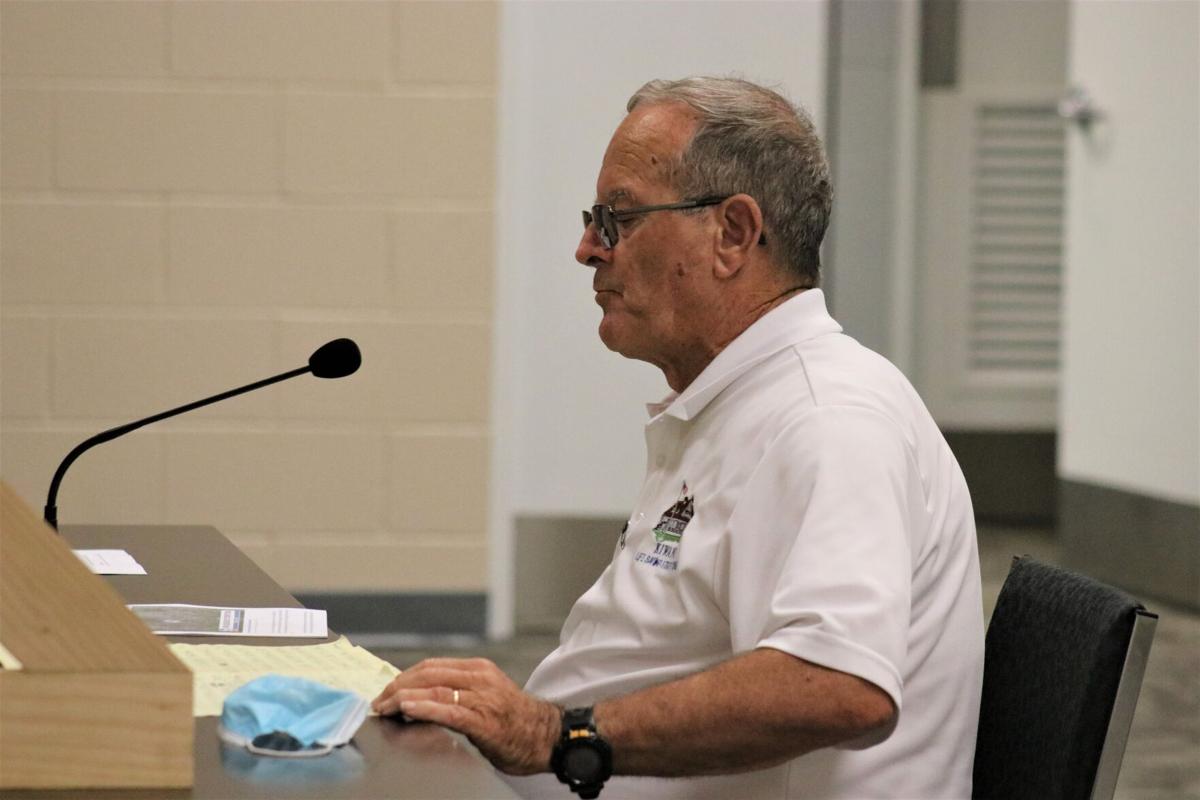 West Cape May resident Jack Killeen tells the Borough Commission he has strong objections to the proposal to allow cannabis sales, calling it a mistake.

WEST CAPE MAY — Supporters of a proposal to allow cannabis to be grown and sold in town cited the potential revenue and the borough’s history as an agricultural area.

Speakers on both sides of the issue had their say Wednesday evening during a public hearing on an ordinance allowing the use. Supporters outnumbered those in opposition, but some residents raised concerns about potential disruption to the borough and encouragement of drug use.

The meeting remained polite and low key, with speakers each waiting their turn to sit at a microphone separated from borough commissioners by a sheet of Plexiglas. In the end, the three-member governing body unanimously approved the ordinance, which will allow cannabis cultivation, retail sales and delivery services in the borough.

That makes West Cape May the second Cape May County town to say yes to cannabis sales, joining Lower Township, which approved its own ordinance July 6. Under the state law legalizing cannabis possession and licensed sales, towns have until Aug. 22 to decide whether to allow sales. If there is no decision by then, the sales will be allowed by default.

Most towns in the county have opted out, some vehemently, others reluctantly. Neighboring Cape May has said no to cannabis sales, while nearby Middle Township had considered their potential but decided there was not yet enough information from the state, which is working through rules for a new market.

West Cape May cited the potential revenue from allowing the sales. The ordinance establishes a local tax of 2% on sales from cultivation and manufacturing and 1% of each wholesale or retail sale. That will be in addition to state taxes on the product.

“You’ve indicated to us that there is going to be quite a bit of money coming from this project,” said resident Judy Smith. She wanted to know what the borough will do with the funds.

Mayor Carol Sabo said she did not know how much money would be raised but said the borough has plenty of infrastructure needs that would otherwise be funded by taxpayers. She did not have an estimate for how much could be raised.

“But you’re expecting a great deal of revenue from this?” Smith said.

LOWER TOWNSHIP — In a 5-0 vote on Tuesday, the township became the first municipality in Cap…

Smith said bringing legal gambling to Atlantic City was also supposed to bring plenty of revenue and solve a variety of problems.

“And now they have nothing but a big mess on their hands,” she said.

Resident Jack Killeen said he had strong objections to the proposal. He brought up the disruption caused by marijuana in the armed forces at the end of the Vietnam War, and problems experienced this summer in shore towns throughout the region with rowdy young people.

“Plus I’ve been a police officer for a number of years,” he said. “In my view, you’re now bringing some of those same problems to my small, family-oriented hometown. I think it’s a mistake.”

He cited issues in Avalon, where Mayor Martin Pagliughi signed an order this summer restricting access to the Boardwalk and beaches overnight, citing unruly crowds. Killeen also mentioned a decision in Long Branch, Monmouth County, to cancel fireworks for July 4 over a large and rowdy beach party.

“I want you to know that I and a lot of other neighbors, when this goes wrong, are going to hold you accountable for it,” Killeen told the commissioners.

Commissioner Peter Burke said the towns Killeen cited do not allow cannabis sales now, adding the majority of voters said yes to legal marijuana. He added that West Cape May was a dry town when he moved there, but now has alcohol sales.

Resident Andrew Ewing supported the ordinance, one of several speakers who did.

“It could be an economic stimulus for the neighborhood and also has potential for a local family to have an agricultural business in West Cape May,” he said.

Rich Kauffeld supported the ordinance but suggested limiting the size of the growing facilities.

“Other than that, I think this is a great opportunity for West Cape May,” he said.

Other speakers supported the overall idea but had questions about security, setbacks and other issues. One man said the hours of operation included in the ordinance — 8 a.m. to 10 p.m. — were overly generous.

Jan Dwyer said the commissioners came up with a responsible and measured ordinance that conforms to the will of the voters.

As approved, the ordinance allows state-licensed cannabis sales in two commercial zones, including a stretch along Sunset Boulevard and a portion of Park Boulevard, but not along Broadway, the main route through town. The operations would have to be at least 1,000 feet from any church, school or school playground.

Cannabis growing operations could be located as a conditional use farther from the town center, with a restriction that they have at least 5 acres of property.

So far, the state has not issued any licenses to grow or sell cannabis beyond the existing medical market. Voters strongly approved a ballot question in November legalizing marijuana, and in February, Gov. Phil Murphy signed off on legalization, giving municipalities 180 days to decide whether to allow retail sales.

NORTHFIELD — An ordinance to allow cannabis sales in Northfield is set for a public hearing and final vote Aug. 10, after a divided council in…

LINWOOD — City Council introduced an ordinance July 14 that, if passed after a public hearing Aug. 11, would prohibit the retail sale of all c…

CAPE MAY — It was about 11:30 a.m. June 9, 2018, when a truck driving on Osborne Street toward Franklin Street inadvertently clipped a row of …

MIDDLE TOWNSHIP — Insa, a Massachusetts-based cannabis company with plans to become the first to legally grow the plant in Cape May County, an…

Sacha Baron Cohen has filed a lawsuit against a cannabis dispensary after it used his character "Borat" on a billboard.

West Cape May Mayor Carol Sabo listens to speakers for and against allowing cannabis sales in the borough. On Wednesday, she and the two other commission members unanimously approved an ordinance allowing sales and cannabis growing, citing the potential revenue.

West Cape May resident Jack Killeen tells the Borough Commission he has strong objections to the proposal to allow cannabis sales, calling it a mistake.