When it rains, it pours. That will be the theme for the rest of the week as the sticky weather continues. However, there will still be plenty of dry time for outdoor plans.

It’ll be more like South Florida than South Jersey on Wednesday morning, at least by early June standards. Similar to the past few mornings, the mainland will be warmer, in the low 70s, while the shore will be in the upper 60s. Dew points will be near the sticky 70-degree mark.

That will continue into Wednesday. In terms of being able to do outdoor work, exercise or go to sporting events, I wouldn’t cancel anything right away unless you have little tolerance for rain. The closer to the event you can wait it out, the better.

Thunderstorms will fire up randomly throughout the day. The morning will see isolated storm coverage, increasing to scattered coverage for the afternoon, waning during the early evening. Flooding rains will be the main problem with these storms. Without much of a current aloft to steer them, they stay in one place and just dump rain. Flood alerts were out from Philadelphia to New York City on Tuesday. Some of that kind of rain will be around our way.

The reason is that precipitable water (PWAT) values will be very high. The PWAT measures how much liquid is in a column of air if you were to ring out all of its moisture and measure it. Anything above 2 inches means tropical downpours will be likely, and we will have just that.

In terms of temperatures, expect upper 80s in Mullica Township and inland spots, while Margate and the shore will be in the low 80s. Factor in the dew points, and it’ll feel like 90 to 95 inland.

Storms will get out of here by 9 p.m. Then, we’ll turn partly cloudy. Temperatures will be in the 80s and 70s during the evening. Staying sticky, it’ll be tough to cool off. Lows won’t get past the upper 60s.

Come Thursday, we’ll try to get a glimpse of the partial solar eclipse between sunrise and 6:28 a.m. A solar eclipse is when the moon blocks the sun, casting a shadow on the Earth during the daytime. Dubbed a “ring of fire” eclipse, the rising sun will turn into a crescent shape.

With a partly sunny sky, there will be the opportunity to see it. Make sure you don’t look directly into the sun, though.

From there, we’re looking at scattered thunderstorms and showers for most of the day. It will be tricky, though. A cold front, with plenty of cool, stable air behind it, will move in from the north. Meanwhile, a pool of moisture will sit to our west, moving our way.

Where the cold front doesn’t pass through, essentially, the places farthest south in the state, we’re likely talking all-day scattered showers and storms. Highs will be in the upper 80s again and very sticky.

Meanwhile, Ocean County should just be stormy for the morning. The front will then pass, and a cooling, easterly wind will keep highs in the low 70s. In between, it will slowly get hotter and stormier as you go south.

As the front slowly slides south, so will the showers and storm coverage overnight. While Cape May will have hit-or-miss storms all night long, Atlantic City and Vineland could be dry by midnight. Temperatures will fall immediately into the 60s behind the front, staying in the 70s ahead of it.

Showers/storms between 3 and 8 a.m. Then, dry, though and humid. Storms arrive after 6 p.m.

Breezy from the easterly direction. Likely dry from Claudette's remnants

A line of thunderstorms, with severe weather, likely

Cape May councilman charged with cyber-harassment of ex-girlfriend

ATLANTIC CITY — A man was fatally stabbed Saturday night in the resort, and a woman who was also stabbed was hospitalized and remains in criti…

EGG HARBOR TOWNSHIP — Facing dwindling room for residential and commercial trash in its landfill, the Atlantic County Utilities Authority has …

Philadelphia police are investigating the murders of two South Jersey residents inside a car Tuesday.

ATLANTIC CITY — A city man was charged in the March overdose deaths of two men from the United Kingdom at a resort casino, the Atlantic County…

ATLANTIC CITY — Over a concern that the resort has become overrun with stray needles and out-of-towners who are addicted to drugs, City Counci… 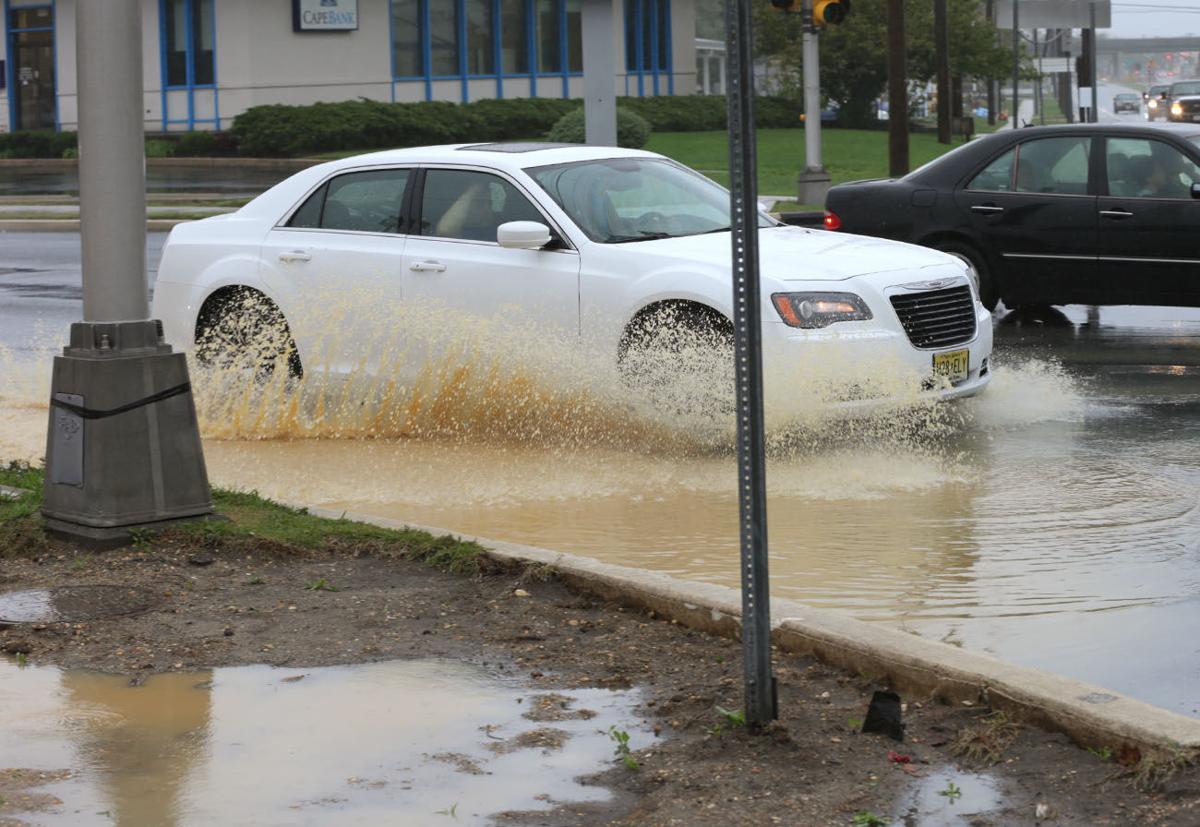 A vehicle drives through flood waters in 2016 on Fire Road at Route 322 in Egg Harbor Township. 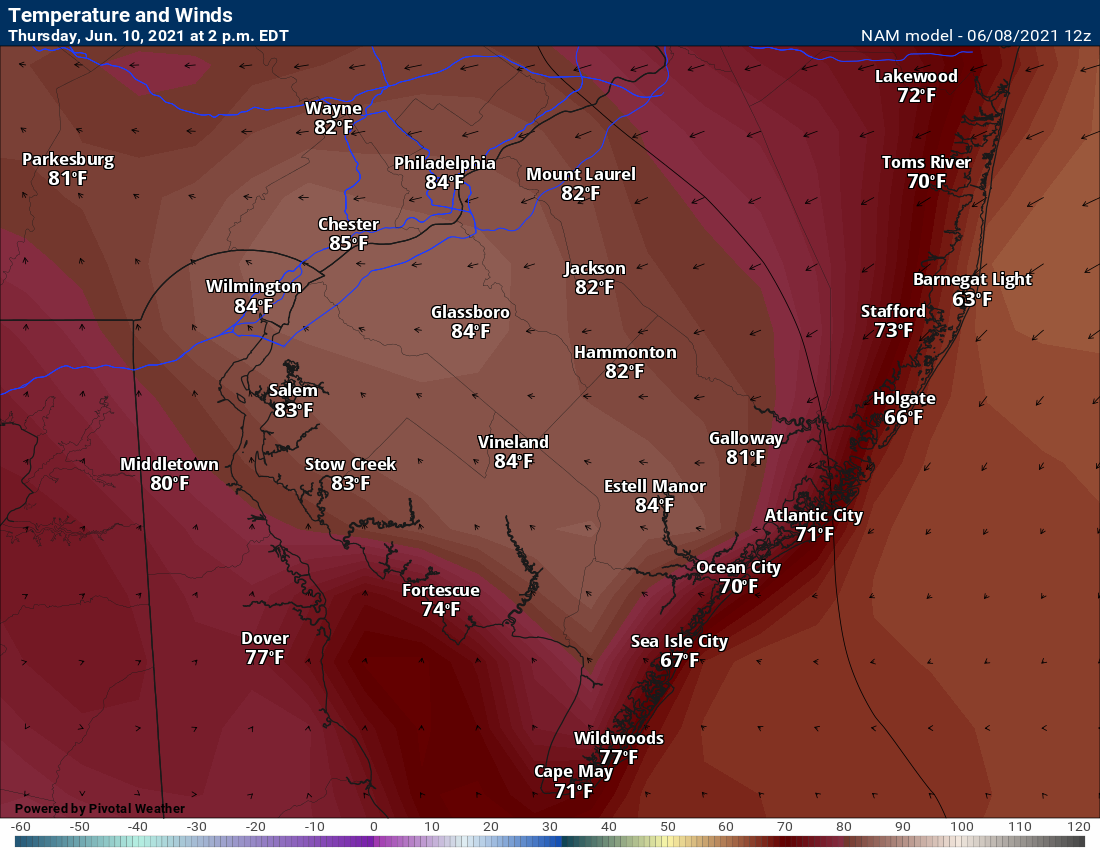 Thursday's temperatures at 2 p.m., according to the North American Model (NAM, American). The shore temperatures are likely too cold. 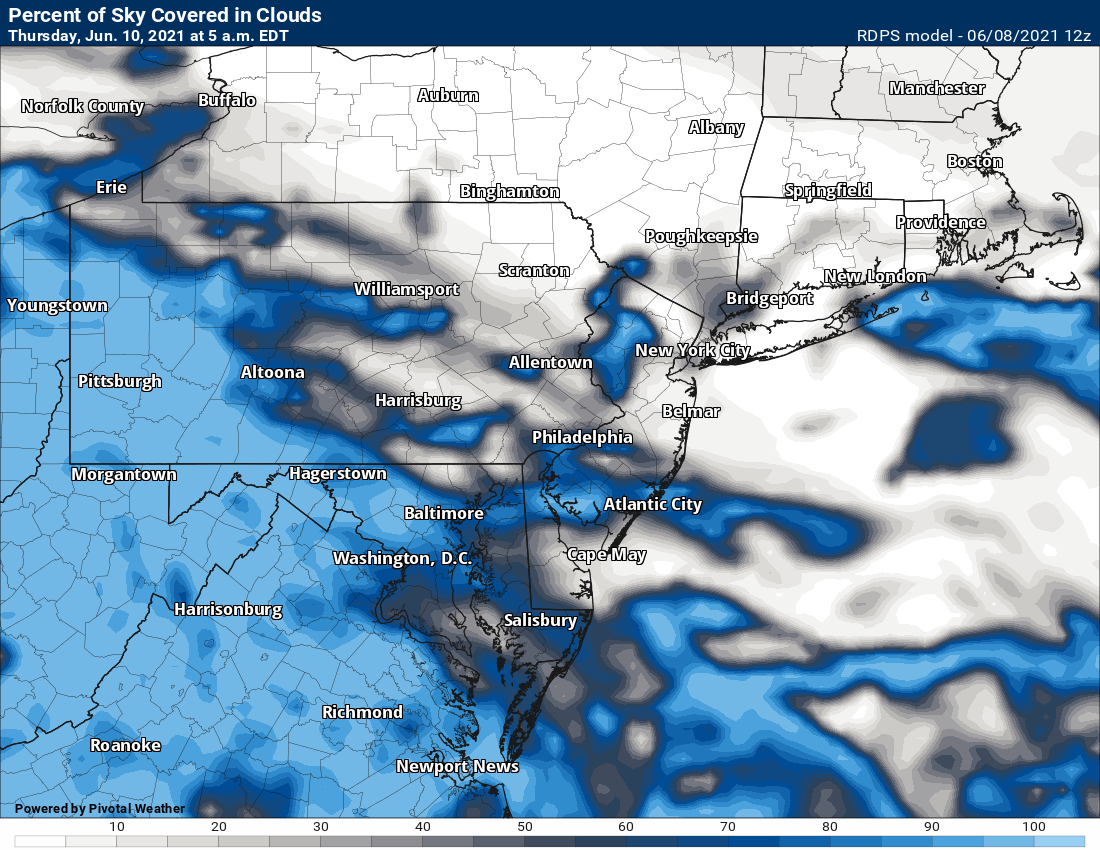 Cloud cover for 5 a.m. Thursday, around the time of the partial solar eclipse. 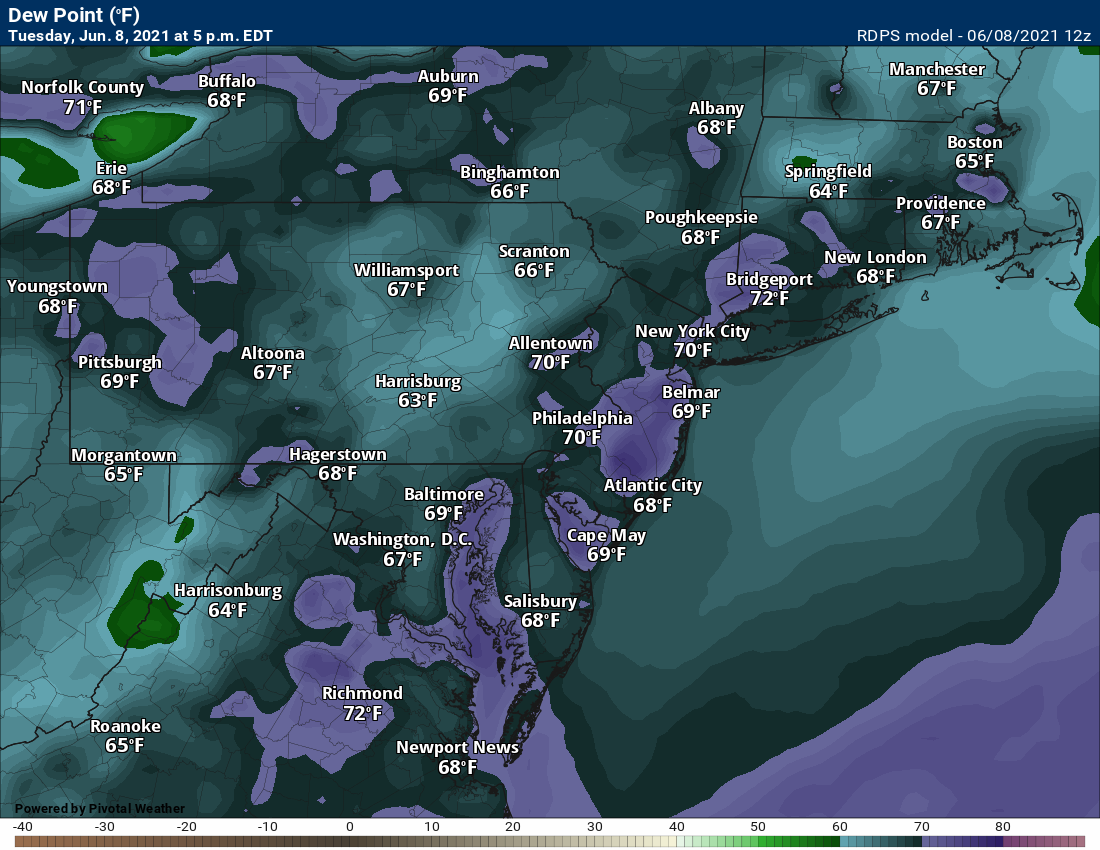 Dew points for 5 p.m. Tuesday, according to the Canadian model. Dew points above 70 are usually seen as sticky.

Forecasted rainfall for Wednesday, according to the Canadian model.

An animation of the solar eclipse moving across the Earth on June 10. New Jersey will get into a partial solar eclipse, with the area shaded in red seeing a complete blockout of the sun by the moon.