US daily virus death toll back above 1,000 for first time in over a month. Get the latest.

'We have to do better': Atlantic City has 'Black Lives Matter' painted on MLK Blvd.
1 comment
Share this
{{featured_button_text}}
1 of 15 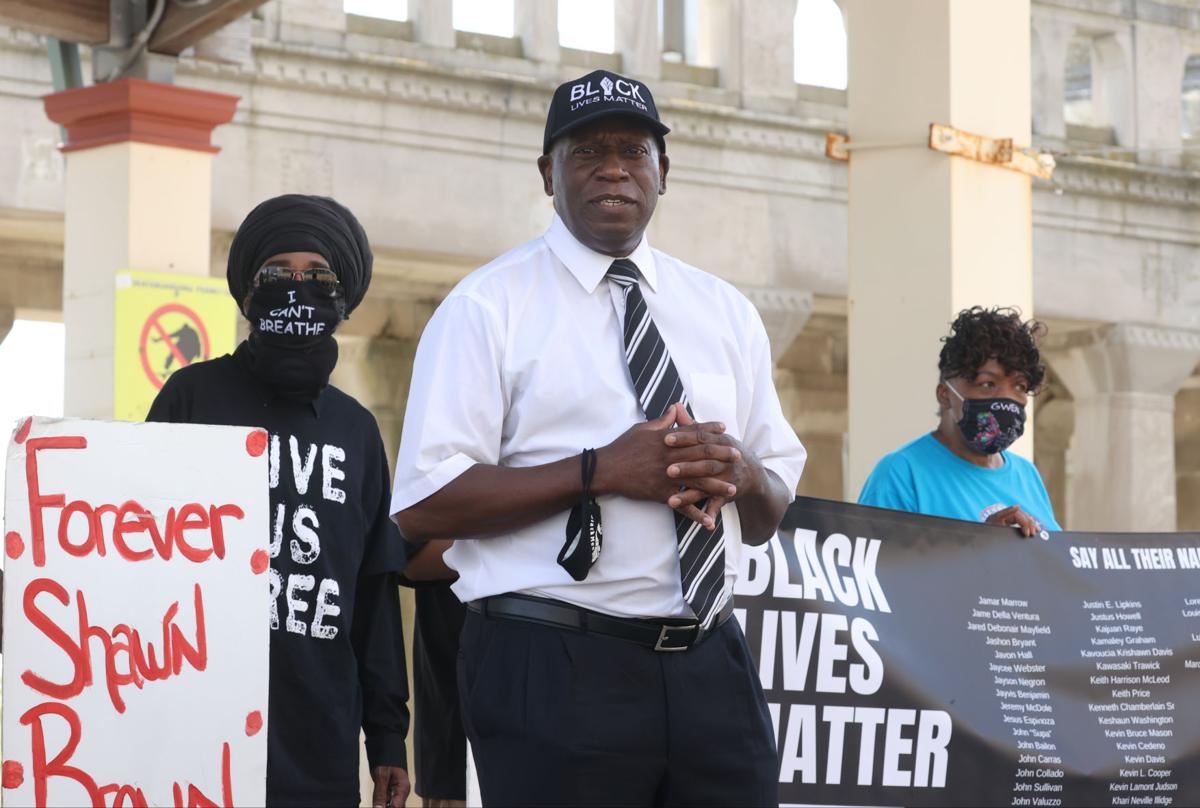 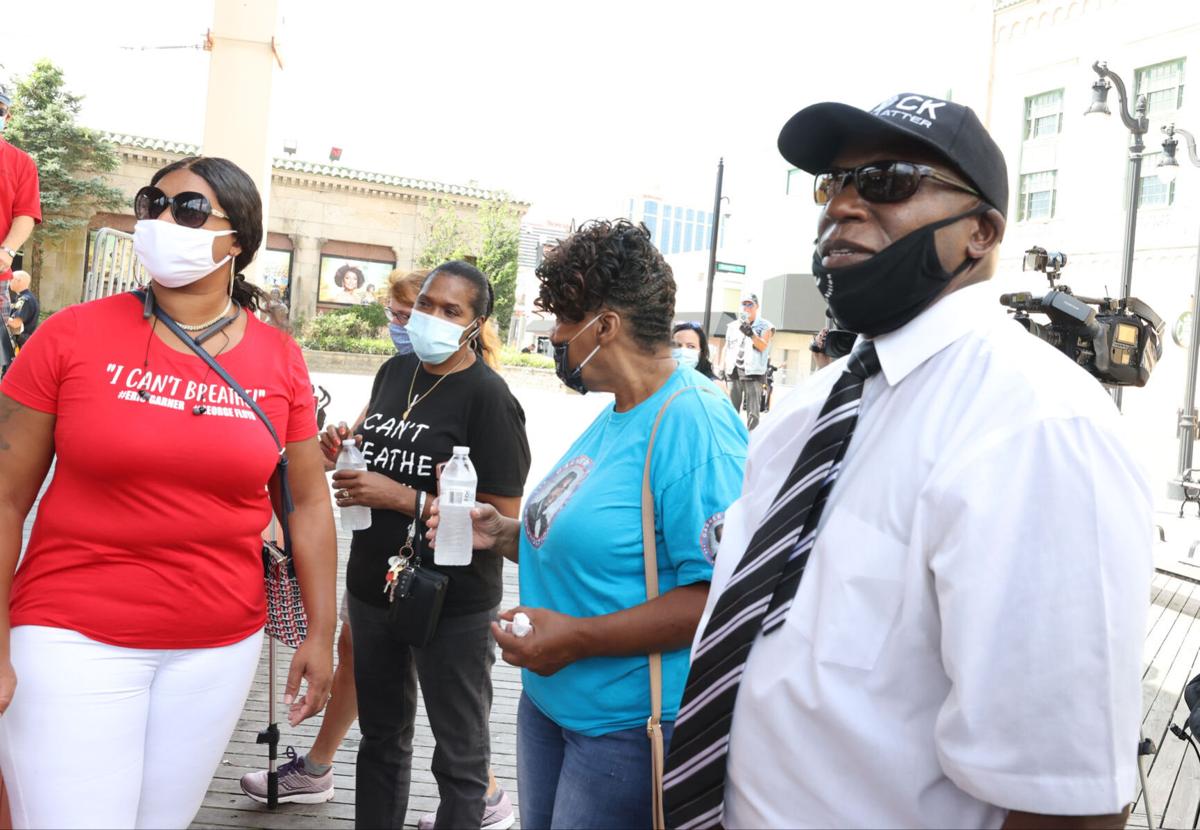 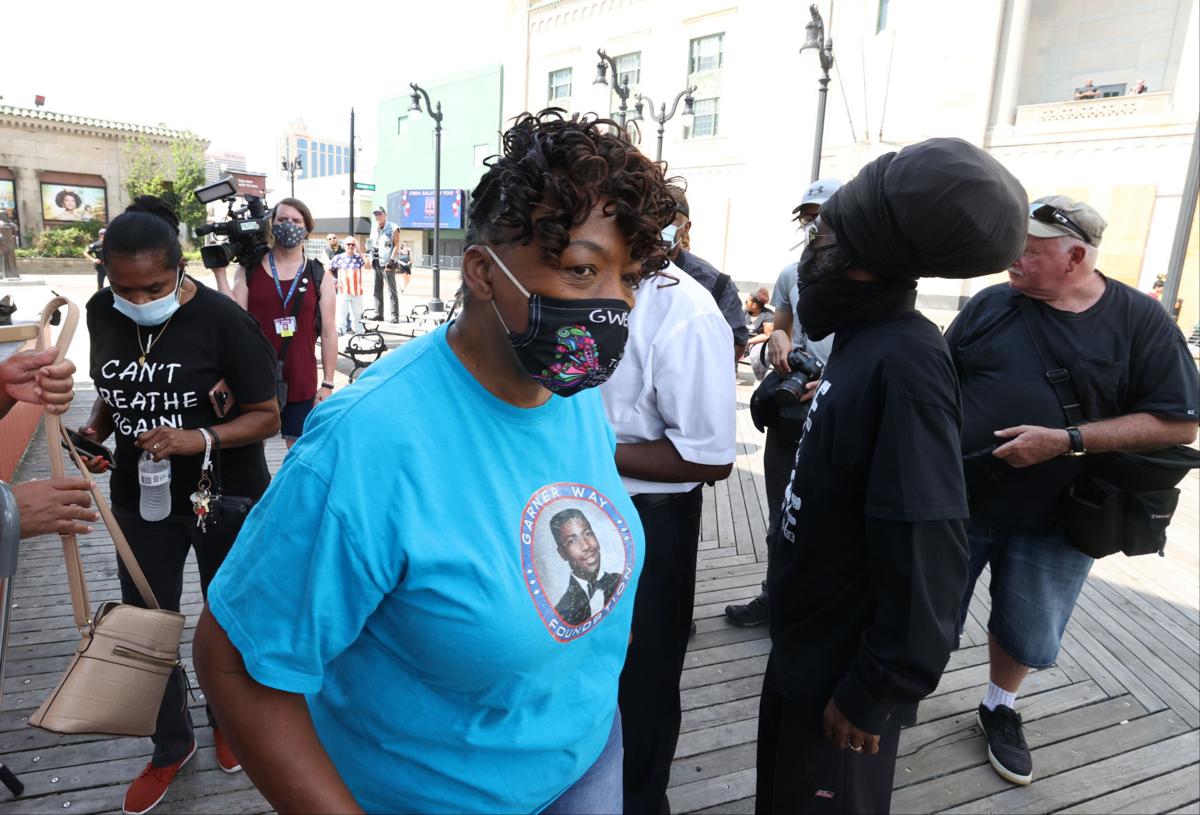 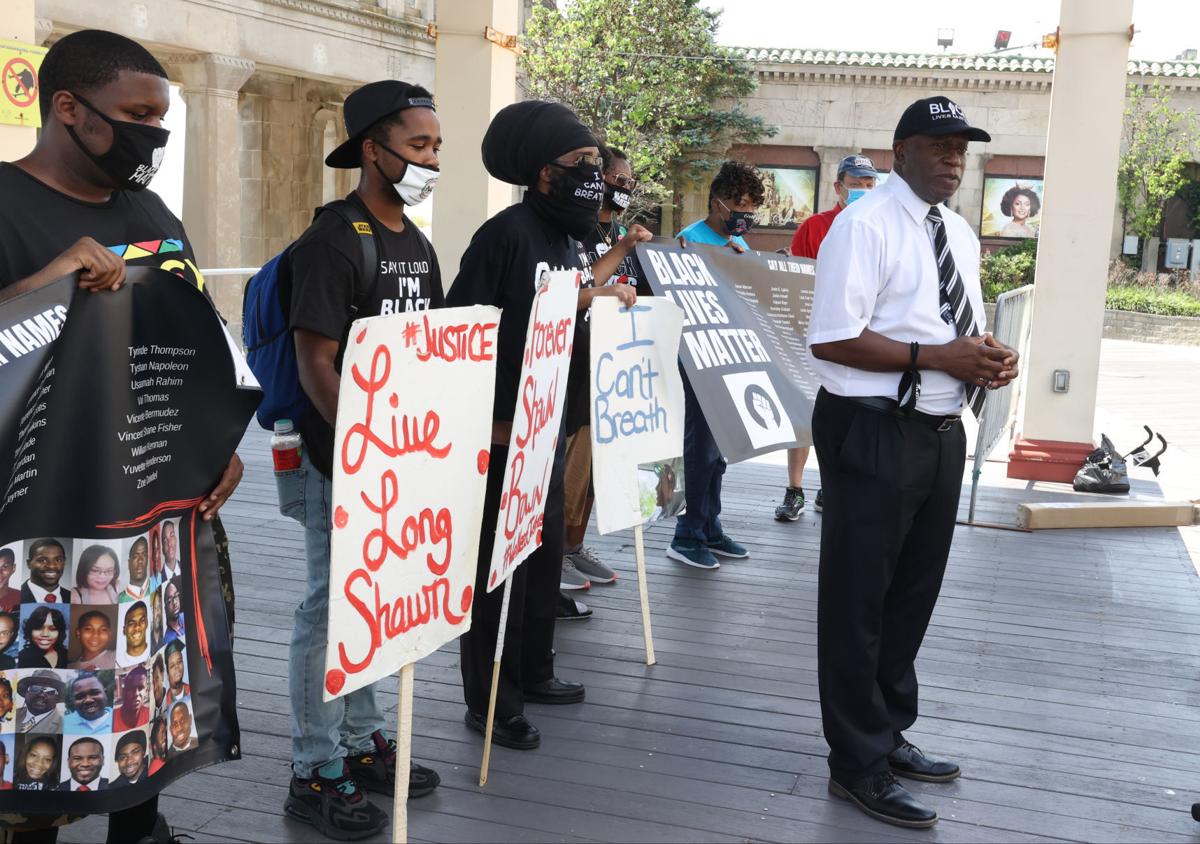 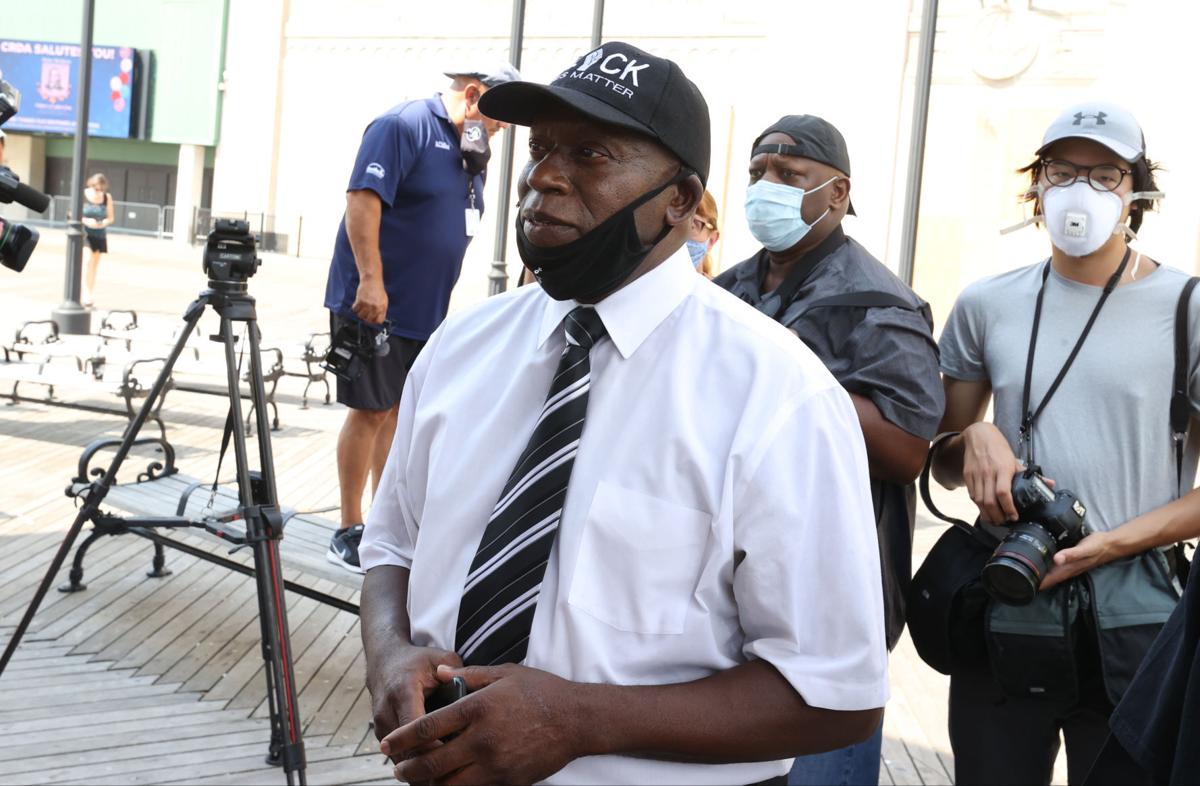 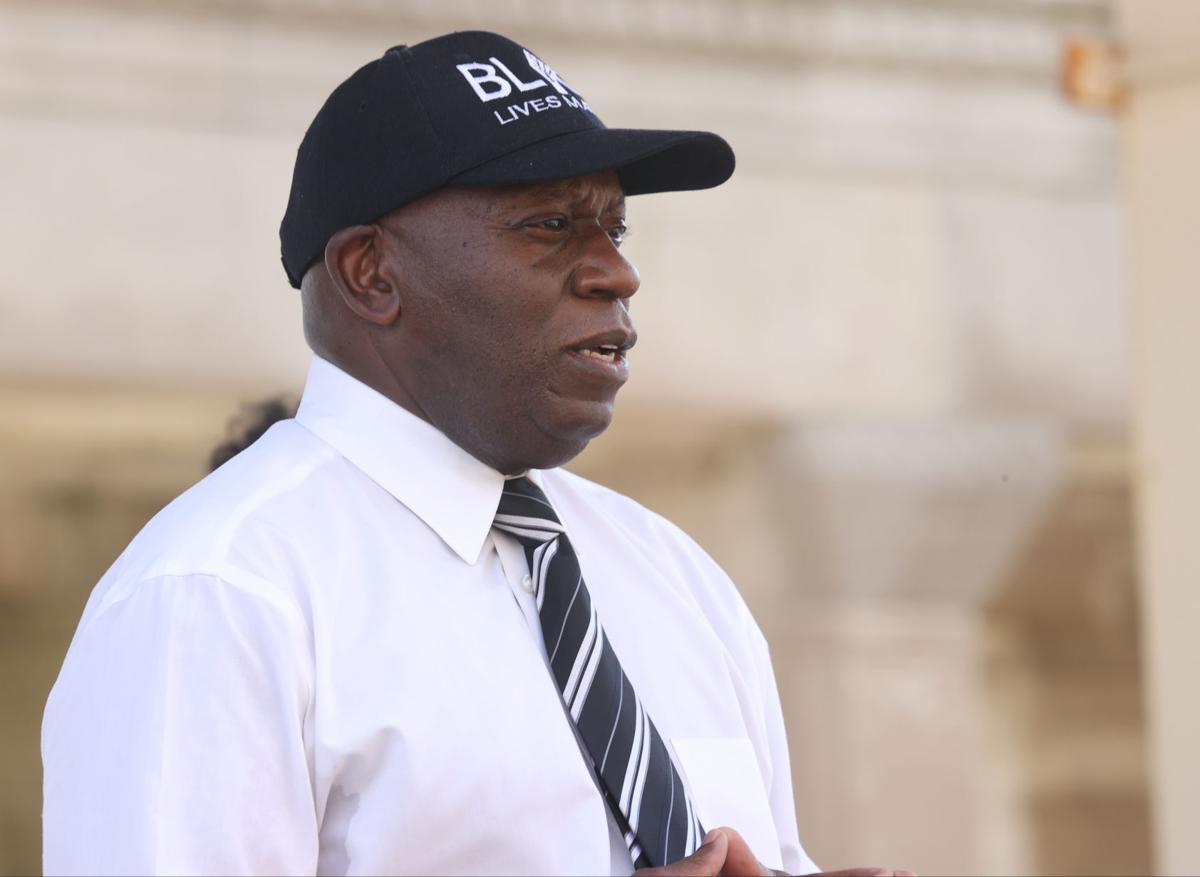 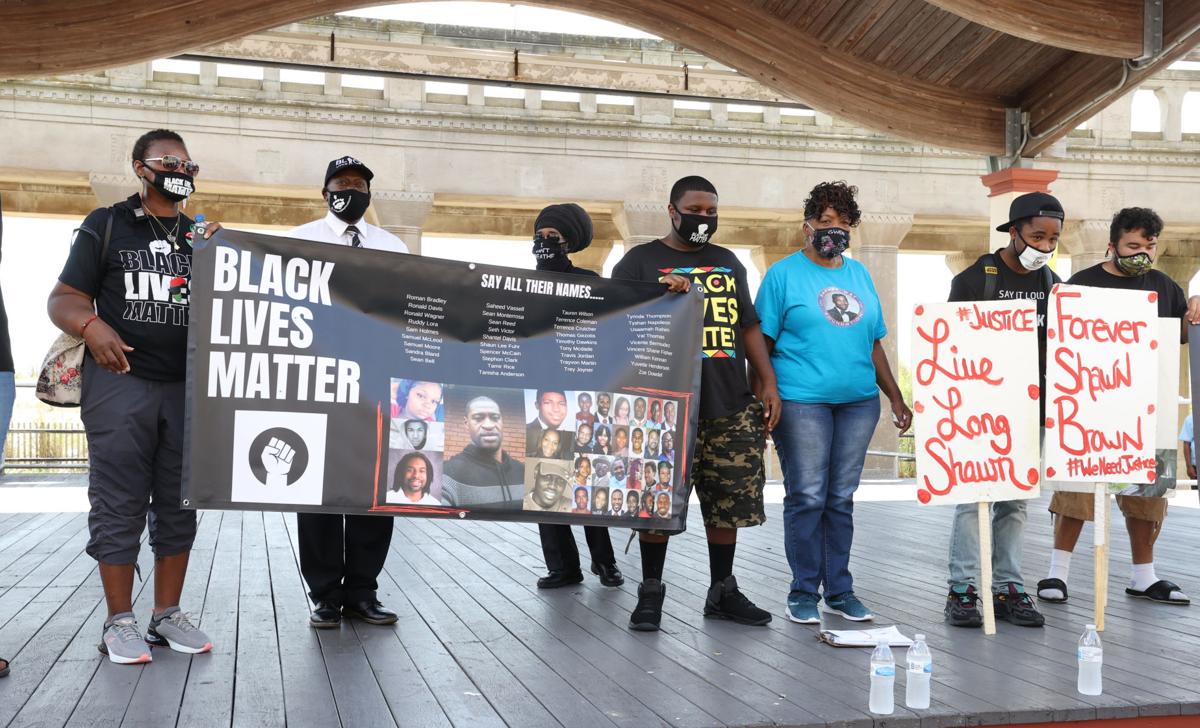 Young and others hold a Black Lives Matter rally on the Boardwalk. ‘We want to say this has been a hard road for the last 90 days,’ he said, a reference to the death of George Floyd in Minneapolis police custody in May. 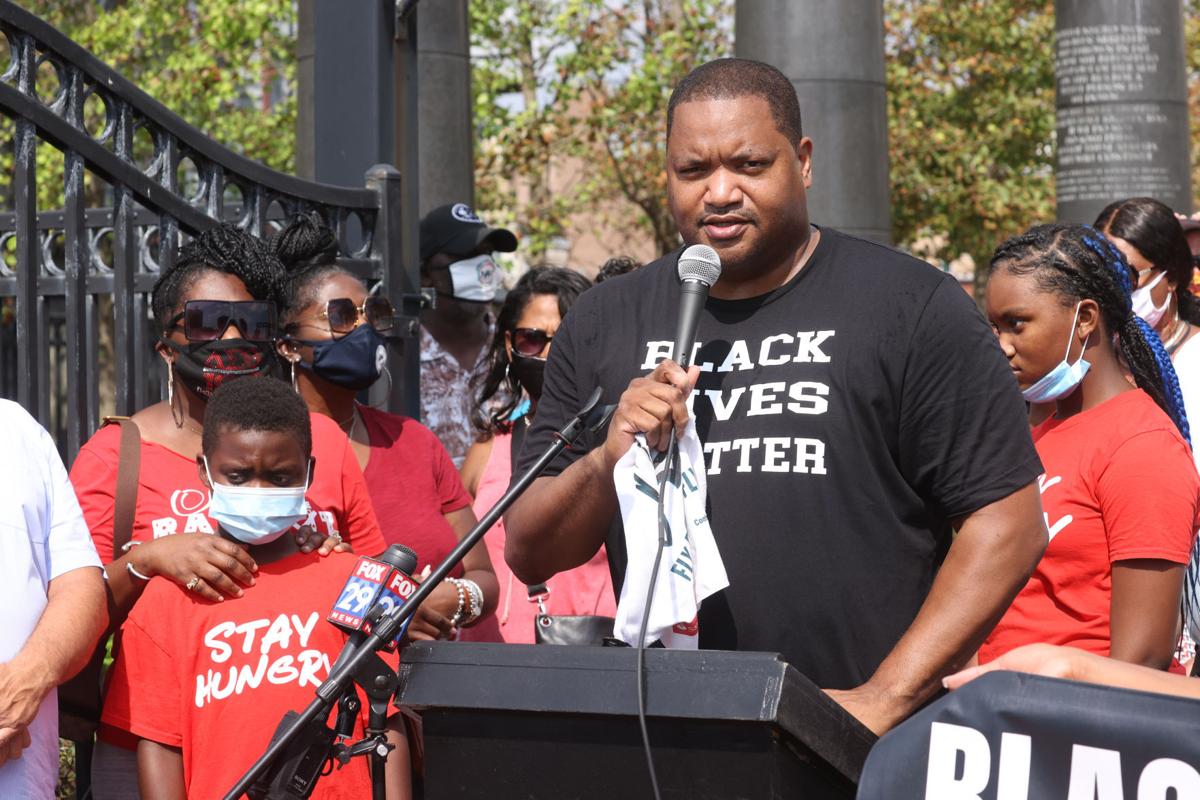 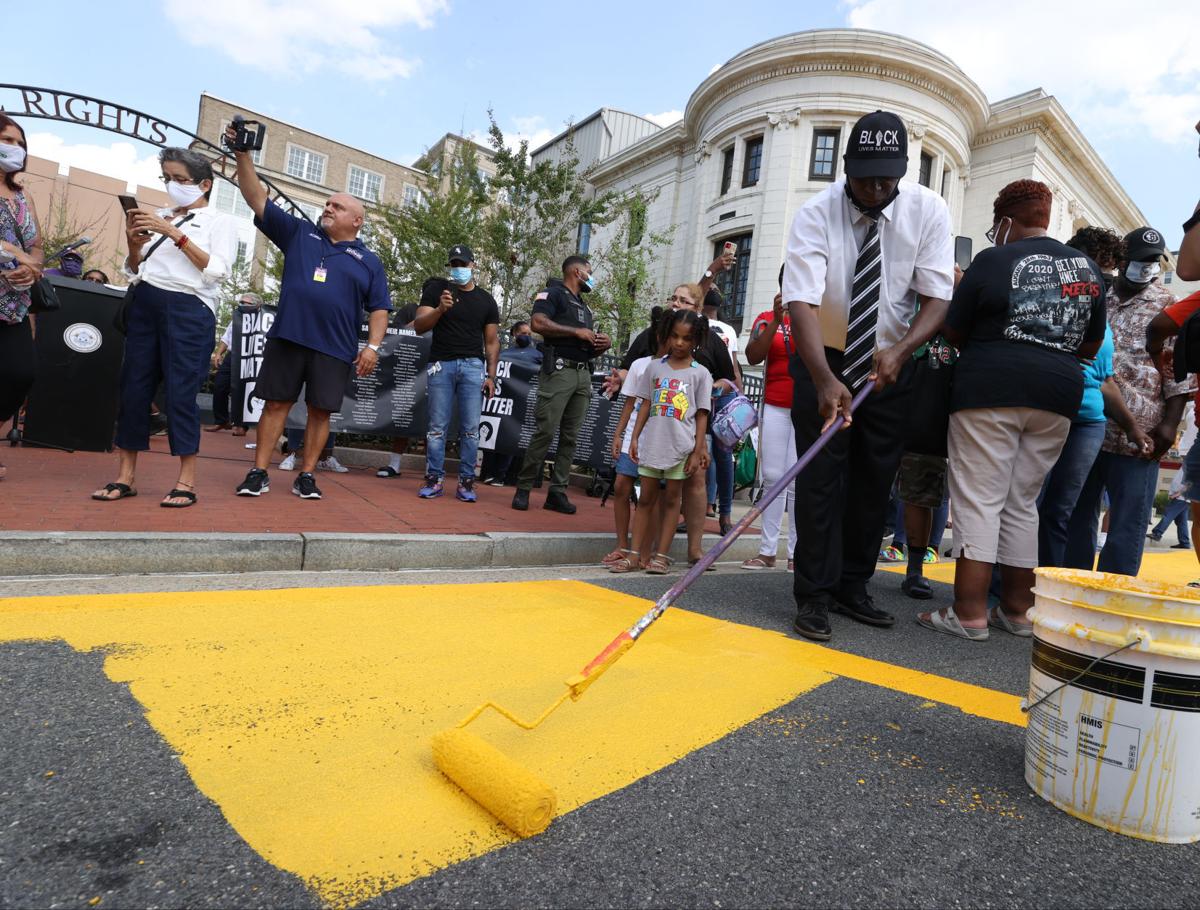 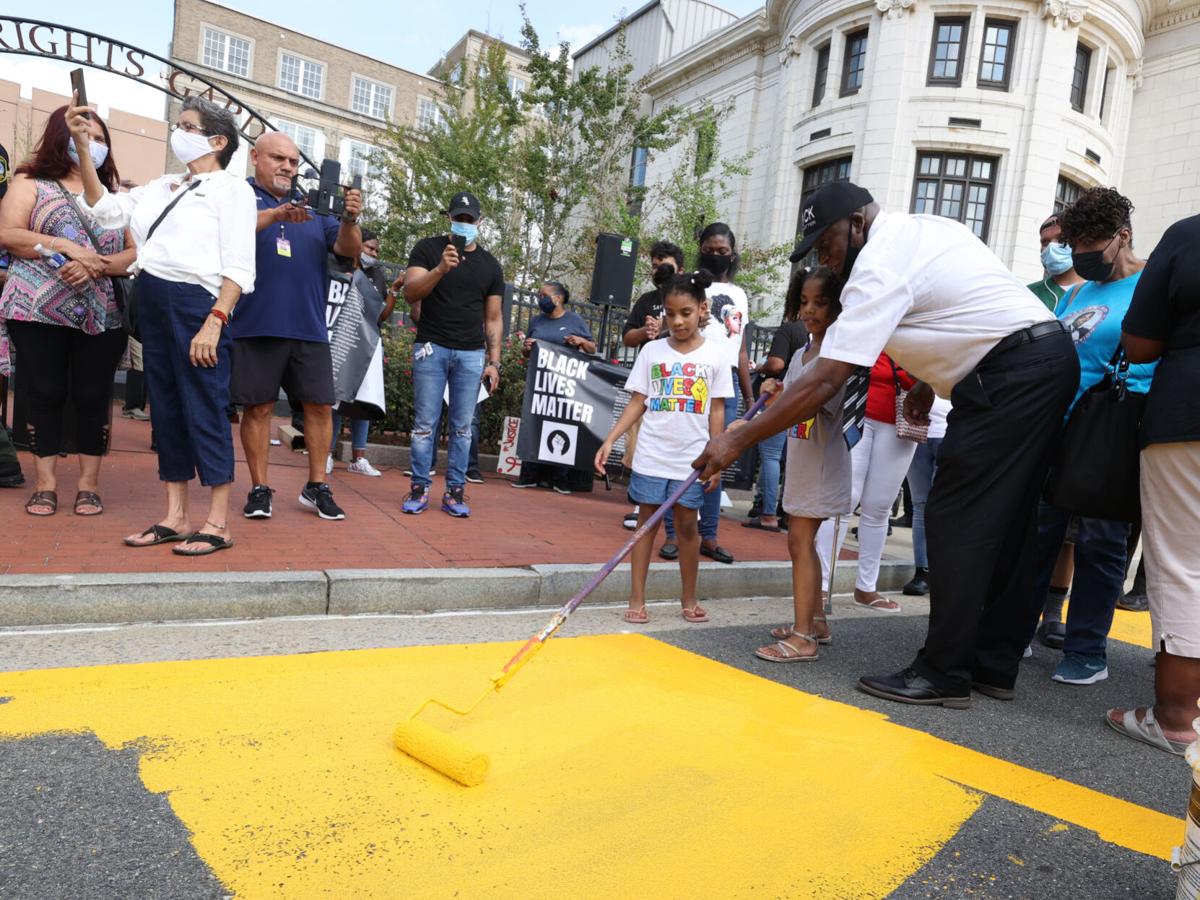 Heniyrah Brown, 9, left, and Derionna Brown, 6, join activist Steve Young in painting ‘Black Lives Matter’ on Dr. Martin Luther King Jr. Boulevard in front of the Civil Rights Garden on Friday in Atlantic City. Video and a photo gallery from the event are attached to this story at PressofAC.com. 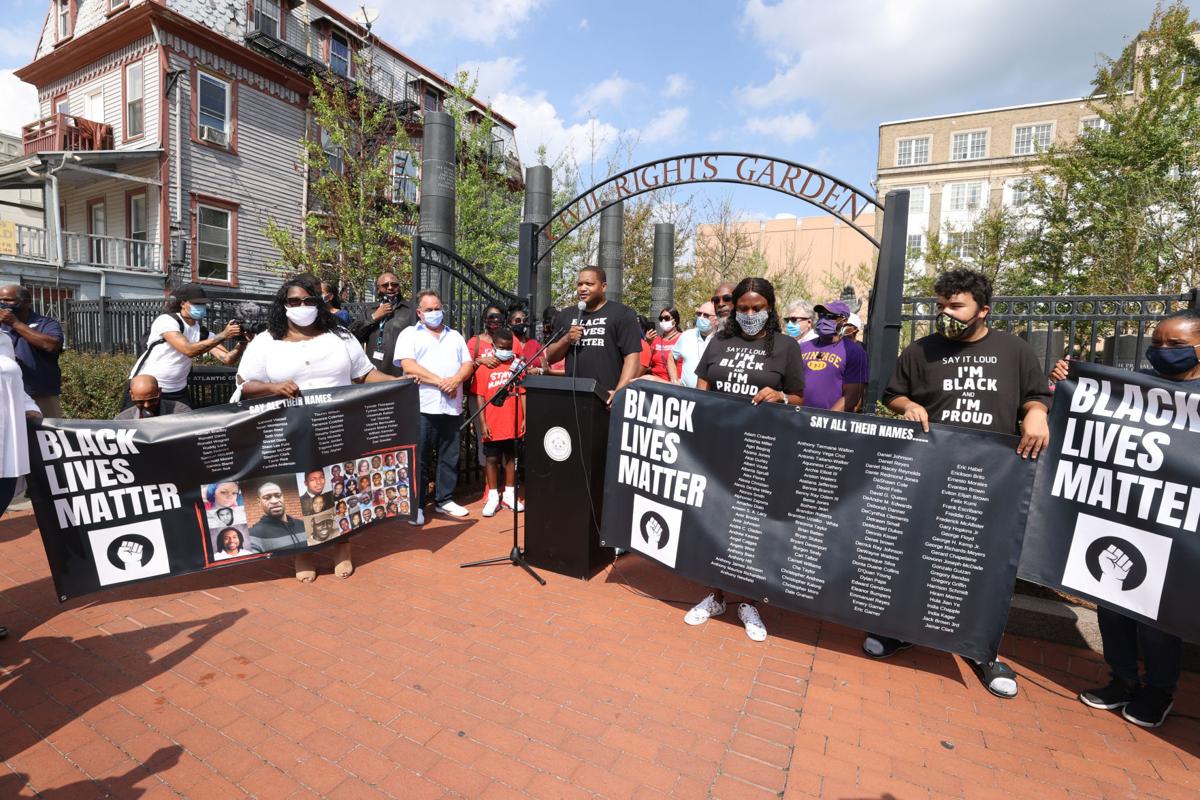 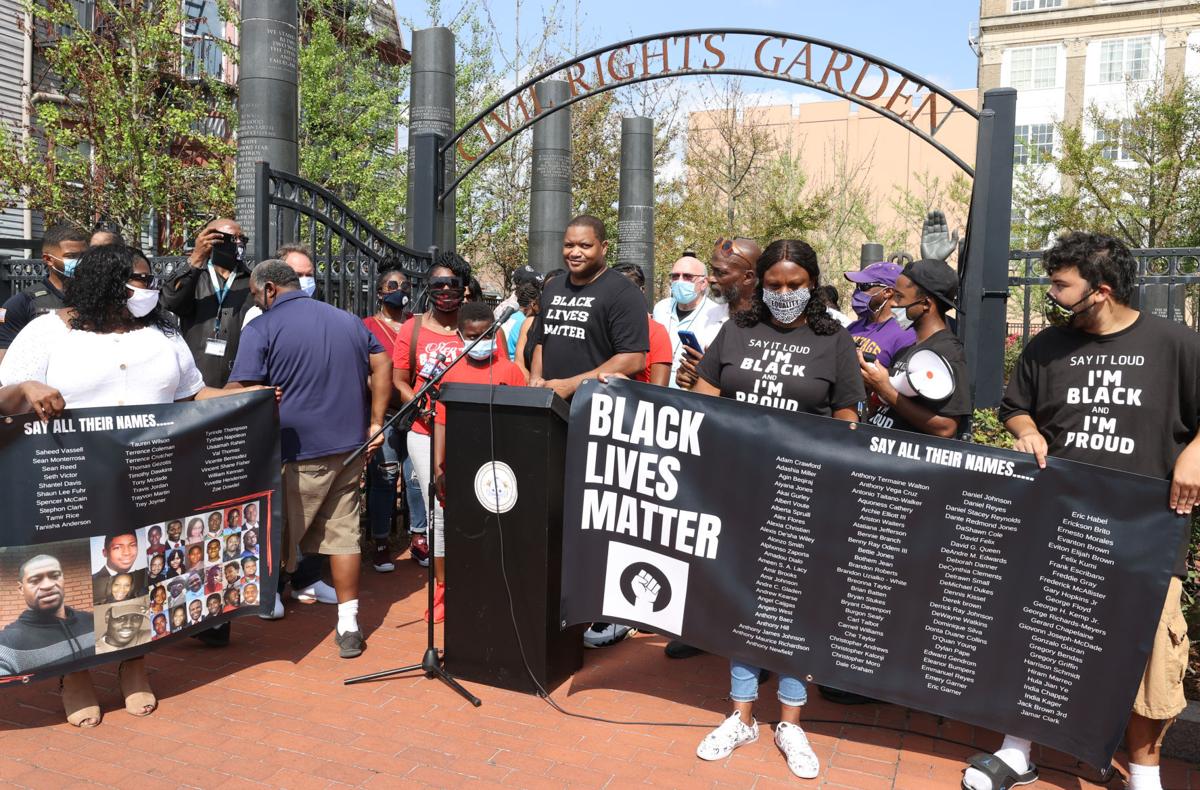 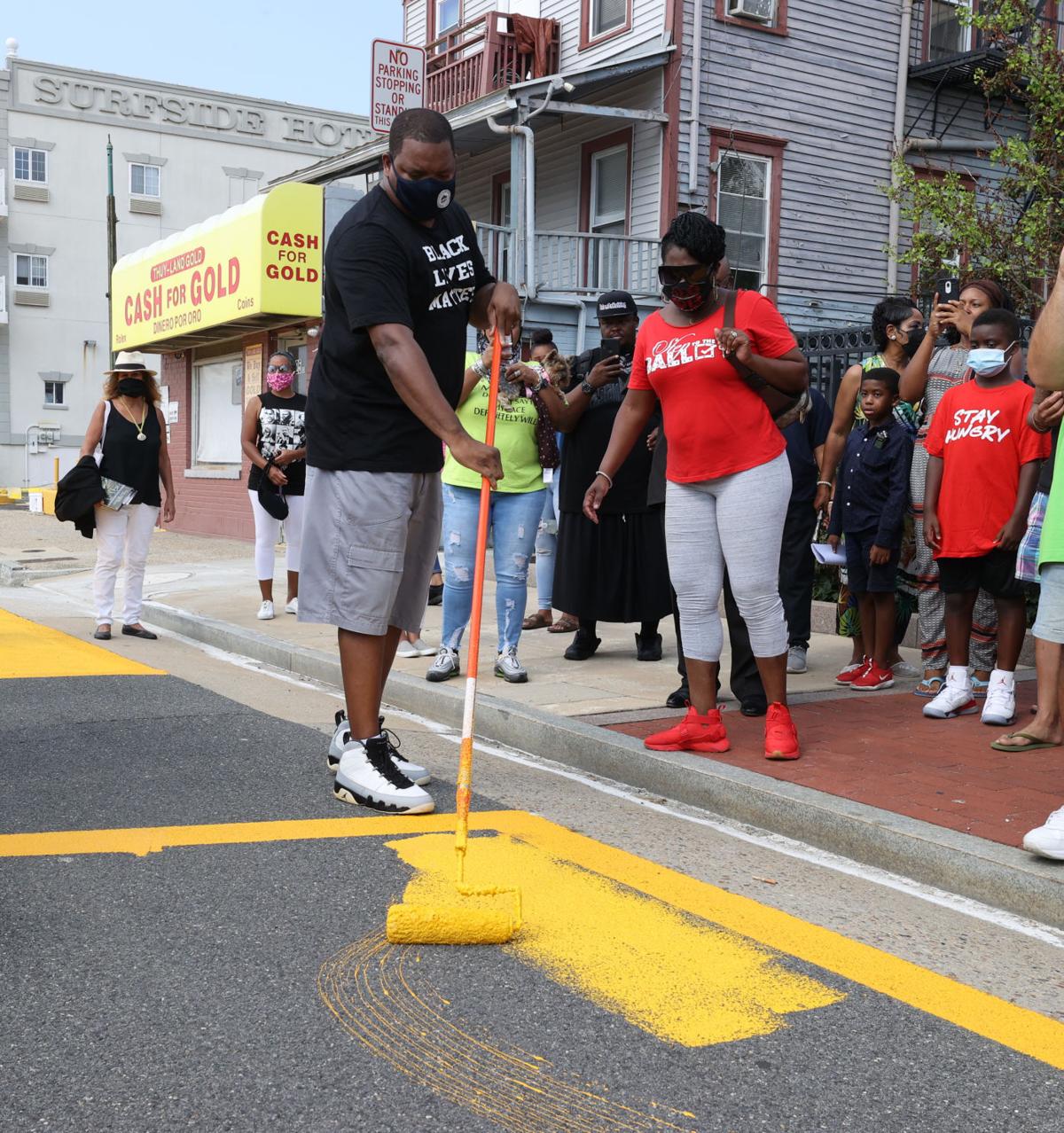 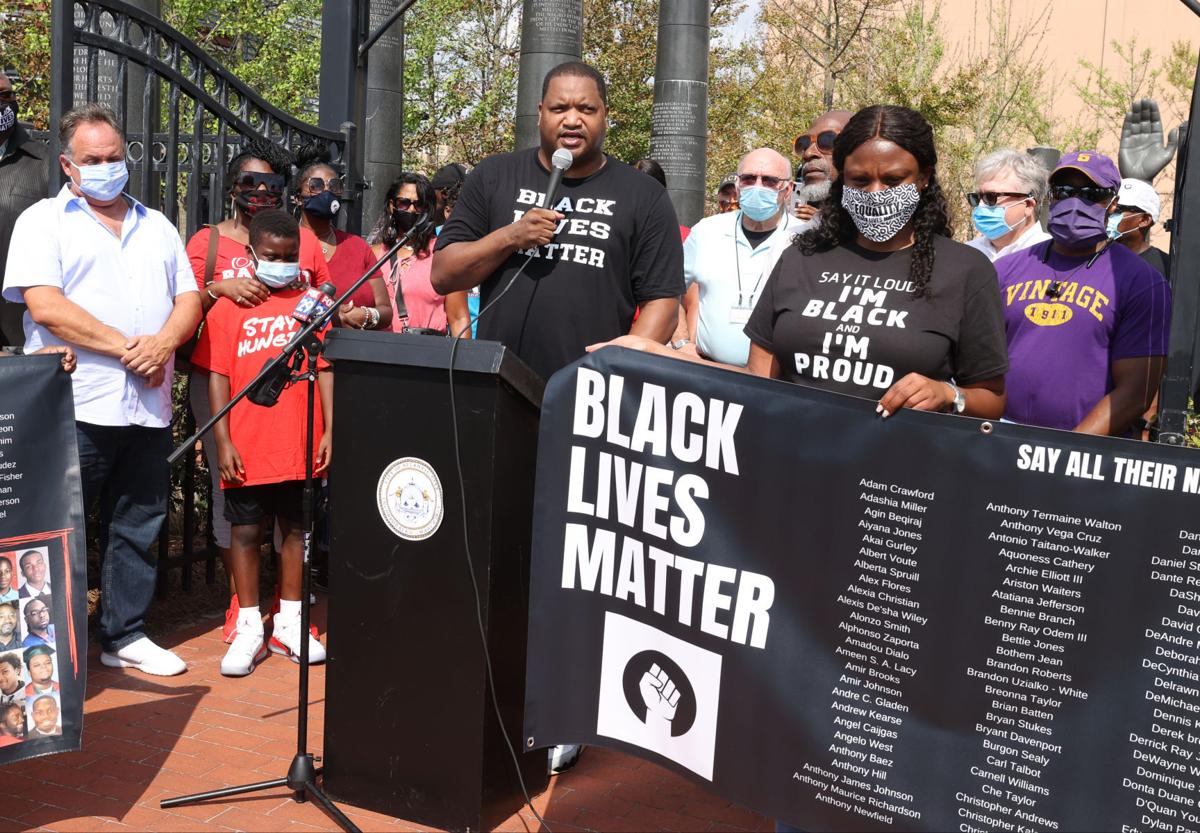 The 38-year-old owner of Lazan Design has been a resort resident all his life, and his family has been there for generations.

His mother grew up unable to use the same facilities as her white neighbors and watched the civil rights movement unfold with her own eyes.

On Friday, Faulk led a group of volunteers in the painting of “Black Lives Matter” along Dr. Martin Luther King Jr. Boulevard. The words were displayed in front of the city’s Civil Rights Garden and spanned the entire block between Atlantic and Pacific avenues.

“For her to be able to come see that her son did this, and she grew up in the same place where she wasn’t allowed to go to certain bathrooms with other people ... it’s hard not to get emotional.”

Young spoke about the Black Men United Coalition, a group he to which he belongs, and how its members created a “Black Agenda” and have proposed a plan to uplift the Black community in the resort through education and health.

“We want to say this has been a hard road for the last 90 days,” Young said, a reference to the death of George Floyd while in Minneapolis police custody in May. “We felt that — and we felt it all the way here in Atlantic City.”

“We were saying to the world, ‘If Black lives mattered to you, why would you want to open a city and let the beach be open in which the majority of Black people live here?’” Young said. “You’re saying Black lives don’t matter — it speaks for itself.”

The group wanted “to shut Atlantic City down”

“Until we think about the solution and how we’re going to open it together,” Young said. “Because, after all, we are the majority here, and we’ve been oppressed the most.”

Levar Davis, 21, of Atlantic City, spoke about the need for peace, saying that “silence is beyond betrayal; it’s disgusting.”

“I will be damned if I let an officer that’s sworn his oath to protect me take my life because you feel threatened,” he said. “I will be damned if I sit here and let another fallen soldier be forgotten. There’s so many names that go beyond the list that it makes my skin crawl … It makes me want to get violent. But I know for a fact that’s not the answer.”

Davis, along with Young, were among the seven arrested during a Black Lives Matter demonstration in the resort on the Fourth of July.

Gwen Carr, the mother of Eric Garner, who died in 2014 after an officer put him in a prohibited chokehold during his arrest in Staten Island, New York, said that officers who commit crimes should be held accountable, just like any other citizen, she said.

Young originally wanted to paint “BLM” on the Boardwalk, but doing so would have violated local laws. For most of the week, it seemed Young would again be at odds with the city, until he accepted Mayor Marty Small Sr.’s invitation Thursday to take part in the painting on MLK Boulevard. Many of the Boardwalk protesters joined, too.

Lazan was first contacted by Young about the Boardwalk painting, but the plan was scratched when he realized the legal hurdles that could come with such a decision. Then, Small reached out and asked if he’d like to do the one on MLK Boulevard. Faulk accepted and got in touch with Dennis Badger, owner of Badger Painting, in search of volunteers from another local, Black-owned business.

Shortly after 2:30, Small said a few words before introducing Carr to speak again. Then, after acknowledging members of the community with plaques for their involvement in Friday’s demonstration, Small read a proclamation designating September as “Black Lives Matter Month” in the city beginning next year. It will be a month of celebration and education throughout the community.

“We can’t say ‘Black Lives Matter’ and then turn around and kill each other,” Small said after the speech. “That has to stop, the senseless violence, and my administration is taking a proactive approach to solve the violence in this community as we move forward.”

The volunteer painters intentionally left three letters unfinished so members of the community could pitch in after the speeches and finish it together. By then, Faulk had changed into a custom baseball jersey with the letters “ACNJ” on the front. To him, it has two meanings: Atlantic City, New Jersey and “Another City Needing Justice,” a phrase he uses often in his art.

“It warms my heart,” he said as he watched everyone painting. “It’s just more than I could have imagined. It’s community at its finest.”

The Cape May County Department of Health on Saturday reported 14 new positive cases among county residents and no new deaths.

Atlantic City activist resigns from county Democratic Committee, arguing it has been unresponsive to calls for justice for Black community

ATLANTIC CITY — The Black vote has been taken advantage of for profit and white interests, a city activist said in a Monday letter in which he…

JERSEY CITY — A man whose phone number was found in the pocket of one of the assailants who killed a police officer and, later, three people i…

Young and others hold a Black Lives Matter rally on the Boardwalk. ‘We want to say this has been a hard road for the last 90 days,’ he said, a reference to the death of George Floyd in Minneapolis police custody in May.

Heniyrah Brown, 9, left, and Derionna Brown, 6, join activist Steve Young in painting ‘Black Lives Matter’ on Dr. Martin Luther King Jr. Boulevard in front of the Civil Rights Garden on Friday in Atlantic City. Video and a photo gallery from the event are attached to this story at PressofAC.com.