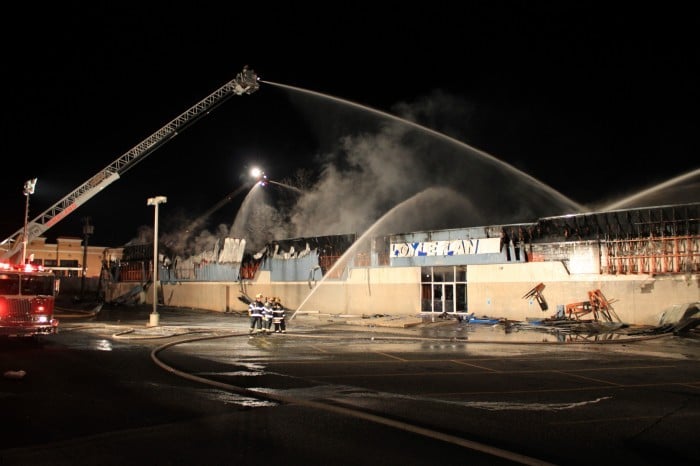 Loyle Lanes, located on South Delsea Drive in Vineland, Cumberland County, was destroyed by fire on Monday morning. Dozens of firefighters tried to put out the fire. The fire ripped through the bowling alley's roof and walls. 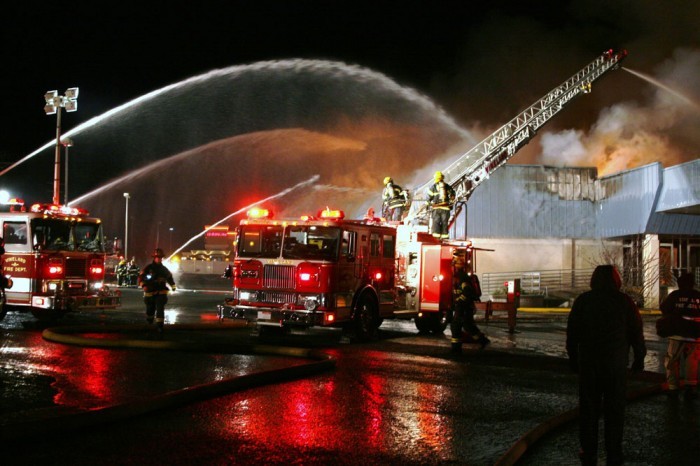 A fire destroyed the Loyle Lanes in Vineland Monday. 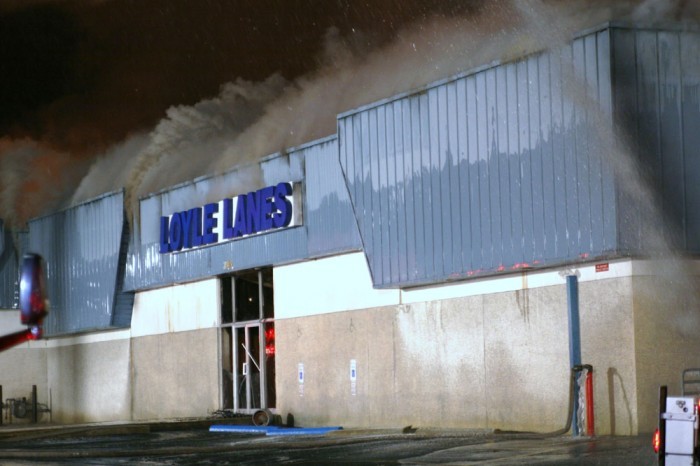 Smoke pours from the roof of the Loyle Lanes. 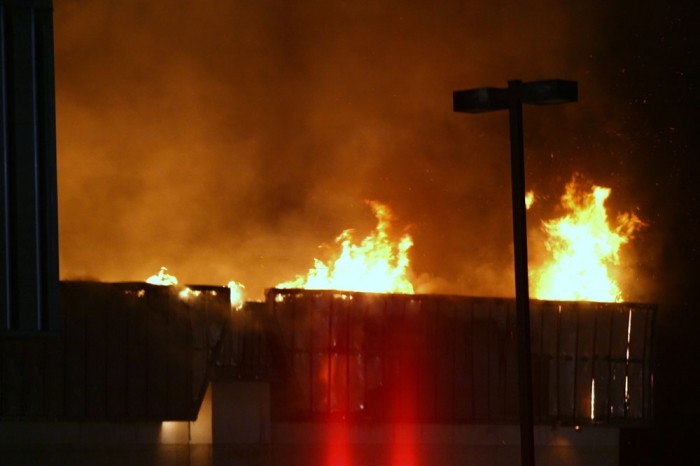 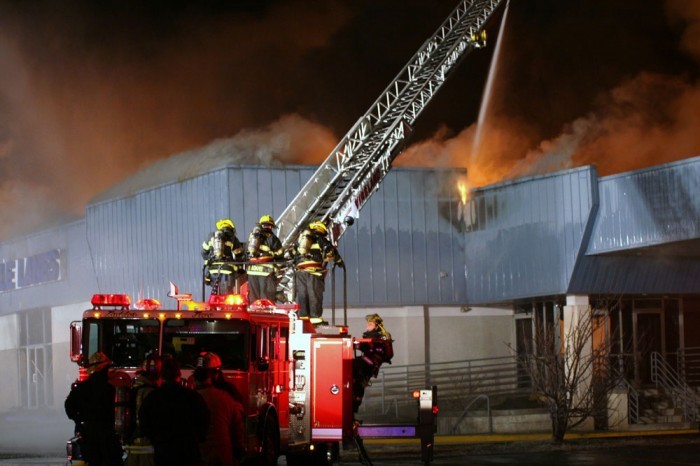 Click to view a photo gallery of firefighters battling the fire.

VINELAND - As Charlie Loyle stared out the window Monday, he kept thinking about the past 50 years.

That's how long ago he and his brother John built Loyle Lanes Bowling Center. There was no highway along South Delsea Drive in Vineland then, and no Cumberland Mall a quarter-mile away. There was one motel across the street and nothing else, just open land.

So the Loyles built a bowling alley and watched as the world around them changed.

In recent years, the owners added a bar. Local bands played there.

In the early-morning Monday hours, the bowling alley underwent its latest change, as fire reduced the polyurethane balls and wooden pins and aerosol shoe deodorizer cans to black smoke and ash.

The fire has been labeled suspicious.

So Charlie Loyle stood next to the window inside the Friendly's family restaurant neighboring the bowling alley. As Loyle Lanes Bowling Center smoldered, officials shut down the roadway in front of the restaurant and bowling alley.

Friendly's opened at 7 just as it does every morning, but with its driveway blocked by fire trucks, the restaurant turned into a meeting point for family and friends who spent some of their happiest moments inside the bowling alley.

Swanson ordered French toast and bacon, and asked his friend if he wanted breakfast.

"I can't eat anything," Loyle said.

The fire started somewhere around 2:30 a.m.

Officials aren't sure how the fire began, but it's being labeled suspicious. Within 20 minutes, fire crews at the scene called for more help. Four hook-and-ladder fire trucks sprayed the building with water - 4,000 gallons a minute, according to Vineland Fire Chief Robert Pagnini. Extra water trucks arrived.

Despite the salt, the water mixed with below-freezing early-morning temperatures to turn the parking lots near the bowling center and restaurant into slushy rivulets.

Firefighters spent 31/2 hours trying to contain the fire, and remained on the scene hours past daybreak.

The fire ate through the roof, leaving behind bare wood and twisted metal. Burned, mangled debris lay in the parking lot. The letters on the front of the building - spelling the name of the alley, Loyle Lanes - were warped, the final two letters, ‘E' and ‘S', melted away.

But somehow, long after the hot-burning fire had been extinguished, the letters L-O-Y-L-E remained hanging from the side of the building.

After 20 minutes of seeing his friend Charlie Loyle slouch and mumble and stumble about the restaurant, Bob Swanson leaned over the counter to talk to the waitress.

"Do you have anything with blueberry in it, maybe a bagel or an English muffin?" he asked. "I'm afraid Charlie isn't going to eat anything."

Swanson tossed the waitress a folded dollar bill, in that subtle way an aunt or uncle or grandparent might slip a child money. She slid it back.

A few minutes later the waitress handed Swanson a Styrofoam container with a blueberry muffin inside. Swanson placed the container on a table next to the window.

"Here you go, Charlie, you can sit down and eat this, and you can still see everything," Swanson said.

Charlie sat and crossed his left leg over his right and took one bite out of the muffin, continuing to look out the window.

Eventually Charlie Loyle's brother John arrived, the brother he started the company with 50 years ago. Chuck and Mike, Charlie's sons, too. The sons own the bowling alley now, after their father and uncle retired. But it wasn't a very convincing retirement, as Charlie was still a fixture at the bowling alley.

The family celebrated New Year's at the alley. Pictures from that party, posted on the business's Web page on the social networking site Facebook, show smiling, happy people. Charlie's wife, Grace, wears a "Happy New Year" visor in one of the photos.

Less than two weeks into 2010, three days after the pictures were posted online, the smiles have been wiped away.

But this Monday, instead of turning on lights and opening doors, the sons spent most of the morning outside, talking to fire officials.

This Monday, a community mourned and reflected. The fire took a part of them, too.

For John Madkiff III, Monday was a chance to return a few favors. Madkiff, of Vineland, 52, was about 10 years old when he started bowling at Loyle Lanes.

"My parents couldn't afford to buy me a bowling ball, so John Loyle gave me one," Madkiff said. "It was my first bowling ball."

Madkiff spent his teen and early adult years coming to and from the bowling alley, racing his motorcycle up and down the nearby railroad tracks with a bowling ball strapped to the back.

When the bike was broken, he would carry the ball to a bus stop, where the Loyles would pick up Madkiff and other area bowlers in a bus for Saturday league play.

In recent years, Madkiff fell on hard times - it's tough being a unionized laborer in this type of economy. But he'd be bowling on Mondays and Tuesdays, and sometimes the Loyles would clean his ball and waive the fee.

Now Madkiff's bowling ball is gone. His wife's, too.

The melted bowling balls took stories with them, the stories of nicks and scratches acquired on wooden lanes against wooden pins that seemed to hold some magic in them.

Bowling is a sport of noise, of kinetic energy transferred from a ball with three holes onto 10 defenseless white pins. The bowler tosses the ball, and the ball whrrrrs down the lane ...

But neither is destined to happen, the roll marked by final, total silence.

So after a lot of noise, Loyle Lanes - the host of midnight bowling and Bowl-A-Thons and Special Olympics, the place where people met best friends and spouses - fell quiet Monday.

It is too soon to tell what the family will do next. Those questions will be answered in time, after the cause of the fire is determined, after Vineland's bowling community has a chance to celebrate what was.

That's what Charlie Loyle did as he sat next to the Friendly's window. A woman approached and placed her hand on his shoulder. He glanced up and stood.

"Charlie, I'm so sorry," she said. They hugged.

He didn't say anything, just shrugged and tossed his hands in the air.

And before long he was sitting back down in front of the forgotten blueberry muffin and a lukewarm cup of coffee, looking out the window beyond icy slush and fire trucks and yellow tape, all the things that could never overshadow the past 50 years.

Steven Smink pleaded not guilty Monday to charges that he orchestrated the Jan. 11 fire that destroyed Loyle Lanes Bowling Center in Vineland.

A month after arson, Loyle Lanes prepares to celebrate its 50th anniversary

Loyle Lanes Bowling Center opened half a century ago - February 1960 - along South Delsea Drive in Vineland.

With links to past coverage - including fire video.

Loyle Lanes arsonist to be resentenced in March

A Philadelphia man responsible for the 2010 torching of Loyle Lanes in Vineland will be resentenced in March.

If any one good thing has come out of the Loyle Lanes arson, it’s that the Loyle family and their patrons found out just how good their friend…

Loyle Lanes, located on South Delsea Drive in Vineland, Cumberland County, was destroyed by fire on Monday morning. Dozens of firefighters tried to put out the fire. The fire ripped through the bowling alley's roof and walls.

A fire destroyed the Loyle Lanes in Vineland Monday.

Smoke pours from the roof of the Loyle Lanes.

Firefighters battle blaze at the Loyle Lanes in Vineland.
© Copyright 2021 The Press of Atlantic City, 1000 West Washington Ave. Pleasantville, NJ | Terms of Use | Privacy Policy
Powered by BLOX Content Management System from TownNews.com.
You don't have any notifications.