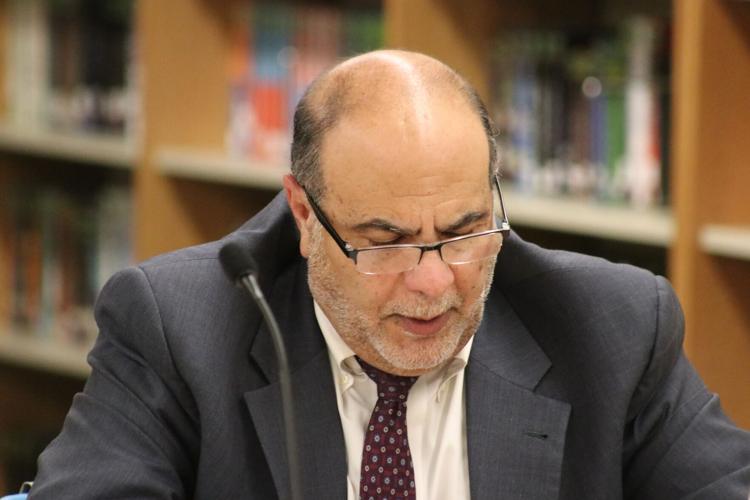 Attorney Frank P. Cavallo Jr. reads a statement about the separation agreement with former Superintendent Vincent Palmieri at the start of the Monday meeting of the Upper Township Board of Education. 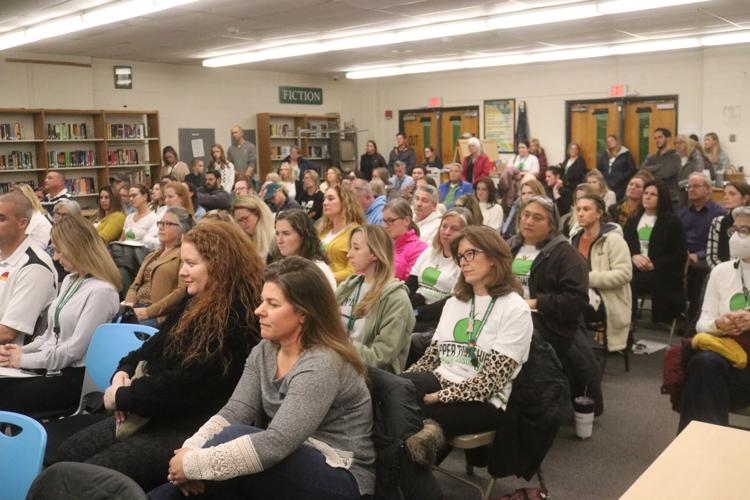 There was a full house at the Upper Township Board of Education meeting Monday. 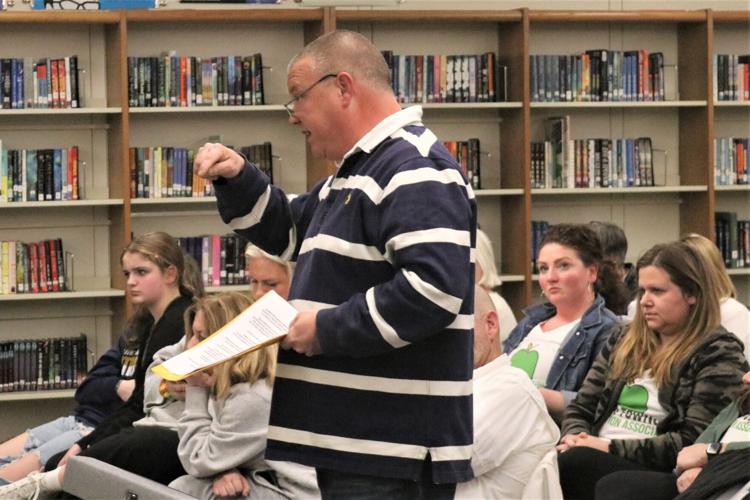 Mike Scanlan called recent issues involving the former superintendent a battle between good and evil and accused the board of representing evil.

UPPER TOWNSHIP — Parents and residents at a crowded Board of Education meeting Monday asked why the district approved a separation agreement with former Superintendent Vincent Palmieri worth more than $300,000.

Several members of the public criticized the board over the cost of the agreement and called for more details to be released about it.

“We the parents and taxpayers in Upper Township expect and demand answers to why the board thought this would be a good idea,” resident Mike Scanlan said.

They did not get very much.

Before opening the meeting to public comment, the board had its attorney, Frank P. Cavallo Jr., read a statement about the agreement, saying the redactions made to a released copy of the document were required by law.

The district released a copy of the agreement after a request from a reporter, citing New Jersey’s Open Public Records Act. But significant sections of the eight-page document were redacted. Significant parts of sections two and three were blacked out, as were all of sections five, six, seven and eight. Section five appeared to be the longest of the sections in the document, covering close to three pages.

Attorney: Upper’s separation deal with former super was not secret

So far, board members have not said why Palmieri left the job in the middle of the school year, beyond a statement that the separation was by mutual agreement. Members of the board said Monday they wished they could say more.

At the meeting, Cavallo said Palmieri accepted less in the agreement than he would have otherwise been owed, stating that Palmieri held tenure in the district as a school principal, and significant vacation and sick time accrued over his 20 years in the district, for which he would be entitled to compensation.

Teachers, parents and community members crowded the library of Upper Township Middle School in the Petersburg section of the township, where the board meets. The board had a full agenda, which did not include any further action on Palmieri’s agreement, but the agreement dominated the comments from the public.

“It has become apparent that somewhere along the line, this board has forgotten who they work for,” Scanlan said. “And who you work for are the parents and the taxpayers in Upper Township. You’re supposed to be serving our children, and from what I’ve seen so far, I don’t see too much of that going on.”

Scanlan called it “the most recent scandal” for the board, and went so far as to describe a battle between good and evil in which the board represents evil.

“Be on notice, we the parents and taxpayers of Upper Township are now paying attention and demand answers. The redacted copy that came out is not going to fly with us,” Scanlan said. “We are not going to give up.”

Other speakers said the money could have funded other priorities for the district, such as a school resource officer. At the same meeting, Business Administrator Laurie Ryan reported on the continued loss of state aid for the district, saying it would face difficult choices in preparing its budget for the next school year.

“We as taxpayers do not want to pay two superintendent salaries,” Pelkaus said.

Under the agreement, Kobik will work four days a week, at a daily rate of $675.

Others speakers at the meeting said the spending took funds away from building improvements and other priorities, and called for a detailed explanation.

At least one speaker was satisfied with the attorney’s explanation, and the assertion that more details could not be released.

“I’m not sure why some people are having a hard time with that, but I appreciate the explanation,” said Gina Abarno-Johnson. She thanked the school board members for their efforts.

Some said the district could have waited until Palmieri’s contract expired at the close of the school year.

According to Cavallo’s statement, Palmieri had tenure as a principal in the district, and had legal claims to a position with the school even if his contract as superintendent were not renewed.

“To be clear, Mr. Palmieri accepted less than he was entitled as part of this separation agreement and the Board of Education paid less than it would have been legally required to pay in order to end the relationship,” Cavallo said, reading from a statement.

Parents were notified of Palmieri’s departure in November via email. Since then, attempts to contact Palmieri have not been successful.

“At this moment in time, the BOE and I have agreed that the best thing for the district is for me to move on and allow the BOE to begin a new search for its next educational leader; sooner rather than later,” read the letter, on school district letterhead and signed by Palmieri and school board President Michele Barbieri. It was dated Nov. 22.

In his statement, Cavallo seemed to bristle at suggestions that the board concealed the agreement.

“Lastly, there was some accusation that the board hid this agreement,” Cavallo said. “The Board of Education is not permitted to publicly discuss an employee’s status or disclose information contained in an employee’s personnel records. However, the board approved this settlement at a public meeting and disclosed the separation agreement, with redactions it was required to make by law, through a request under Open Public Records Act. The separation agreement was also openly discussed at a public meeting. The board has consistently followed the law on public access to employee records and information.”

How have school districts impacted by funding reforms responded to cuts?

After school aid reforms signed into law last year moved millions of dollars from some districts to others that were underfunded, school distr…

Attorney Frank P. Cavallo Jr. reads a statement about the separation agreement with former Superintendent Vincent Palmieri at the start of the Monday meeting of the Upper Township Board of Education.

There was a full house at the Upper Township Board of Education meeting Monday.

Mike Scanlan called recent issues involving the former superintendent a battle between good and evil and accused the board of representing evil.