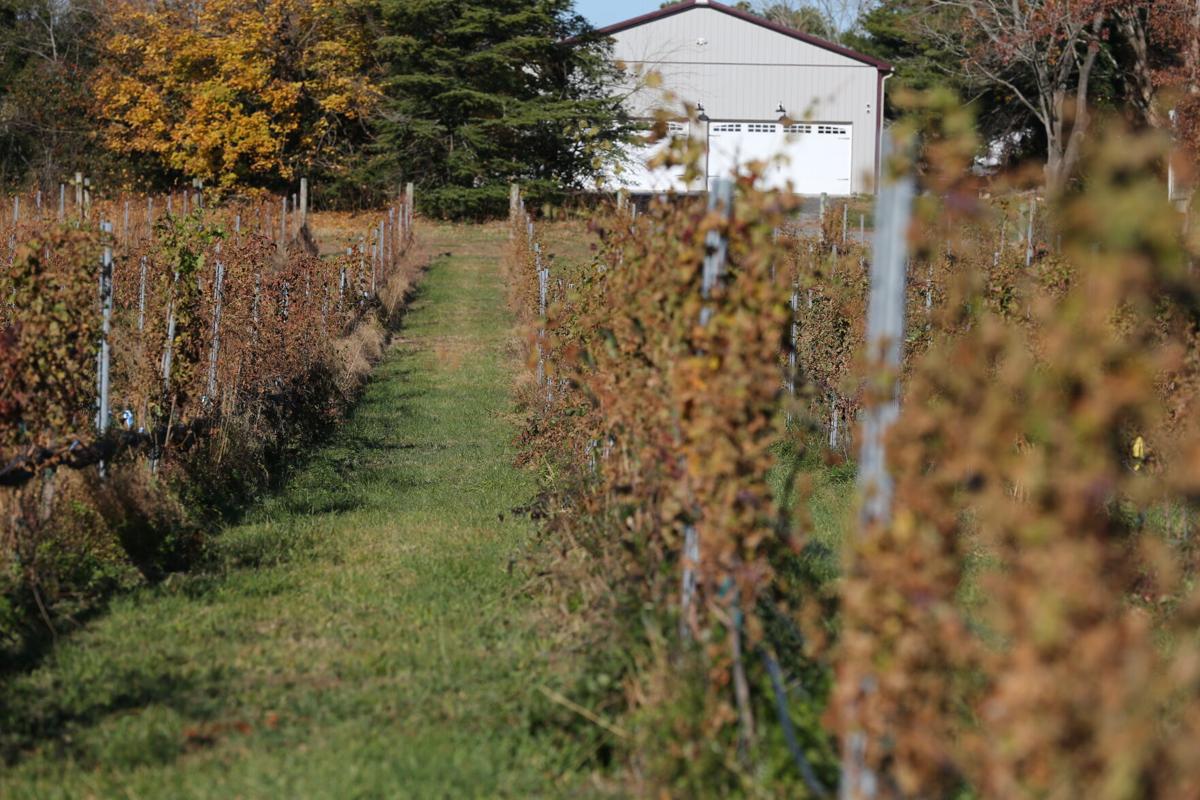 Set in a quiet neighborhood in the Beesleys Point section of Upper Township, lines of grapes grow in a small vineyard. It is set to be dubbed Ocean City Winery. 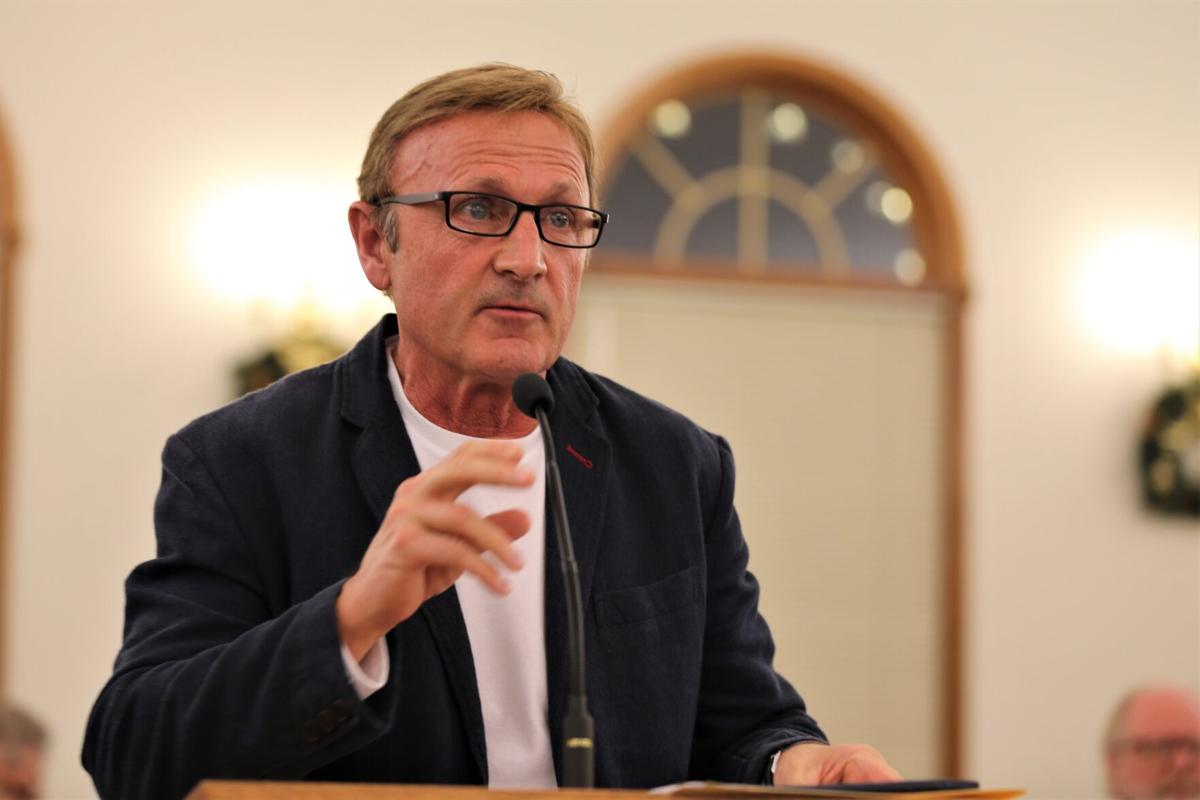 Neighbor Ed Price speaks against plans for a small winery in Beesleys Point to Upper Township Committee on Monday.

UPPER TOWNSHIP — It will be years before a small vineyard off Route 9 in Beesleys Point produces a single glass of wine, but neighbors want to nip the proposal in the bud.

Owner Michael Halpern has about 3 acres of chambourcin and cabernet grapes planted in rows at the site of a former Christmas tree farm, with plans to eventually open the Ocean City Winery.

Several neighbors seem to hate the proposal. Many came to a Township Committee meeting Monday asking their elected officials to block the proposal. Many believe the business will grow far beyond a small wine tasting and sales of bottles from a local farm.

Resident Ed Price, a former candidate for mayor in Ocean City, described the plan as an entertainment venue being called a winery. He and other neighbors told committee members of their worries about noise, traffic and other problems coming to their quiet dead-end streets set between Route 9 and the Garden State Parkway.

“This is a very quiet, pastoral street. It’s got some of the cutest kids in the township, short of my grandchildren,” said Victor Nappen, who said he owns property in the neighborhood.

The property has been designated a working farm by the Cape May County Agricultural Development Board.

The neighbors want the township to appeal that decision and take any possible steps to derail the winery plan.

“I can’t believe that anyone here would want to wake up one day to find this in their own backyard,” said one of the speakers.

Mayor Richard Palombo said township officials have to be careful about what they say, to avoid any appearance of influence on a matter that could come in front of the Planning Board.

He said a Planning Board subcommittee, including the board’s attorney, met with neighbors and the owner to discuss some of the issues. Township attorney Dan Young said at the meeting Monday that committee members had several of the same concerns as the neighbors about traffic and noise when they were first notified of the winery proposal about two years ago.

The proposal may not need to go in front of the Planning Board at all. That’s the opinion of Colin Bell, an attorney representing the property owner. Under New Jersey’s Right to Farm legislation, he argued in a phone interview, the proposal could get approval from the county’s agricultural board.

The board has already ruled that the site is a working farm, he said. According to Bell, a tasting room is considered an allowable ancillary use for a winery, much like a farm stand.

At a previous meeting of the county agricultural board, the winery asked that the site plan be tabled, Bell said. He said Halpern wants to work with neighbors and with the township.

“We’re certainly willing to be very reasonable so long as my client has the right to develop an economically viable farm,” he said.

According to Bell, the winery has already agreed not to allow any outside music, food trucks, weddings or parties, with the exception of family members.

While neighbors worry about increased traffic on Bayaire Road, a quiet, residential cul-de-sac, current plans call for an entrance on Route 9. He said the winery has also agreed to limited hours of operations.

But neighbors say they plan to keep fighting and expect to hire their own attorney to oppose the plan. They asked the township to send its attorney to the next Agricultural Development Board meeting to oppose the winery plan. A meeting of the board scheduled for Nov. 29 has been canceled, according to the county website.

In addition to fears of loud music, special events and more traffic, several of the neighbors at the Monday meeting spoke about the application of pesticides. They said they were worried for their children and their groundwater in an area that depends on well water. Neighbors spoke of clouds of fog being applied to the fields by someone in a protective suit.

LOWER TOWNSHIP — When Jake Hauser turned 21, he became a frequent visitor to the tasting roo…

At the meeting, Committee member Curtis Corson said any agricultural application of pesticides must be done under strict state guidelines by someone with a license. He said the off-the-shelf products applied to lawns are of greater concern for well users than commercial agricultural uses.

Halpern declined to comment on most issues, leaving it to Bell to speak on his behalf. But he spoke about pesticide use, saying he only uses chemicals that are labeled for use on grapes, and only as specified under state guidelines.

That includes the use of protective gear when applying the aerial spray, he said. Halpern said he is not obligated to notify neighbors, but he does so.

He purchased the land in 2005 and lives at the site. The total property is about 5 acres, with 3 acres under cultivation. Property records posted online state the property sold at that time for $333,000.

As Palombo pointed out, the property has been used as a working farm for many years. It was the site of Trops Trees, which was its use when the property’s development rights were sold under the Farmland Preservation Program. The former tree farm had a sign on Route 9 identifying it as preserved farmland.

Even if the approvals come quickly, it will be some time before anyone uncorks a bottle of Ocean City wine grown in Upper Township.

“Even if it gets approval by the end of this year or early next year, it will still be two years before we get the tasting room open,” Bell said.

Here's how badly space affects the blood of astronauts

WH: Russia could 'at any point' attack Ukraine

WH: Russia could 'at any point' attack Ukraine

Insane base jumpers leap blind from cloudy cliff in Italy

Insane base jumpers leap blind from cloudy cliff in Italy

'It's coming directly towards us:' Eyewitnesses capture Florida tornado that left hundreds displaces

'It's coming directly towards us:' Eyewitnesses capture Florida tornado that left hundreds displaces

One hundred years ago, a postage stamp cost 2 cents, radios were the main source of entertainment, Margaret Gorman won the first Miss America …

Trees return to Ocean City beachfront for the holidays

OCEAN CITY — The popular beachfront holiday trees are back in Ocean City for 2021.

UPPER TOWNSHIP — In more than two decades as mayor, Rich Palombo has seen hurricanes, blizzards and tornadoes, as well as a pandemic. The comm…

Wineries have uncorked many additional revenue streams such as hosting weddings, dinners, parties and meetings. Since enactment of a 2015 law,…

Wineries have uncorked many additional revenue streams such as hosting weddings, dinners, parties and meetings. Since enactment of a 2015 law,…

The invasive species has made its way to 11 states so far, and wineries are worried about the damage they’ll cause to the industry.

Due to the COVID-19 pandemic and Gov. Phil Murphy’s executive orders, event planners are facing difficult decisions over the next few weeks ab…

Set in a quiet neighborhood in the Beesleys Point section of Upper Township, lines of grapes grow in a small vineyard. It is set to be dubbed Ocean City Winery.

Neighbor Ed Price speaks against plans for a small winery in Beesleys Point to Upper Township Committee on Monday.