Police and Coast Guard search for a missing person off the beaches in Ventnor and Atlantic City on Friday. The Coast Guard suspended its search Saturday for a recovery mission. 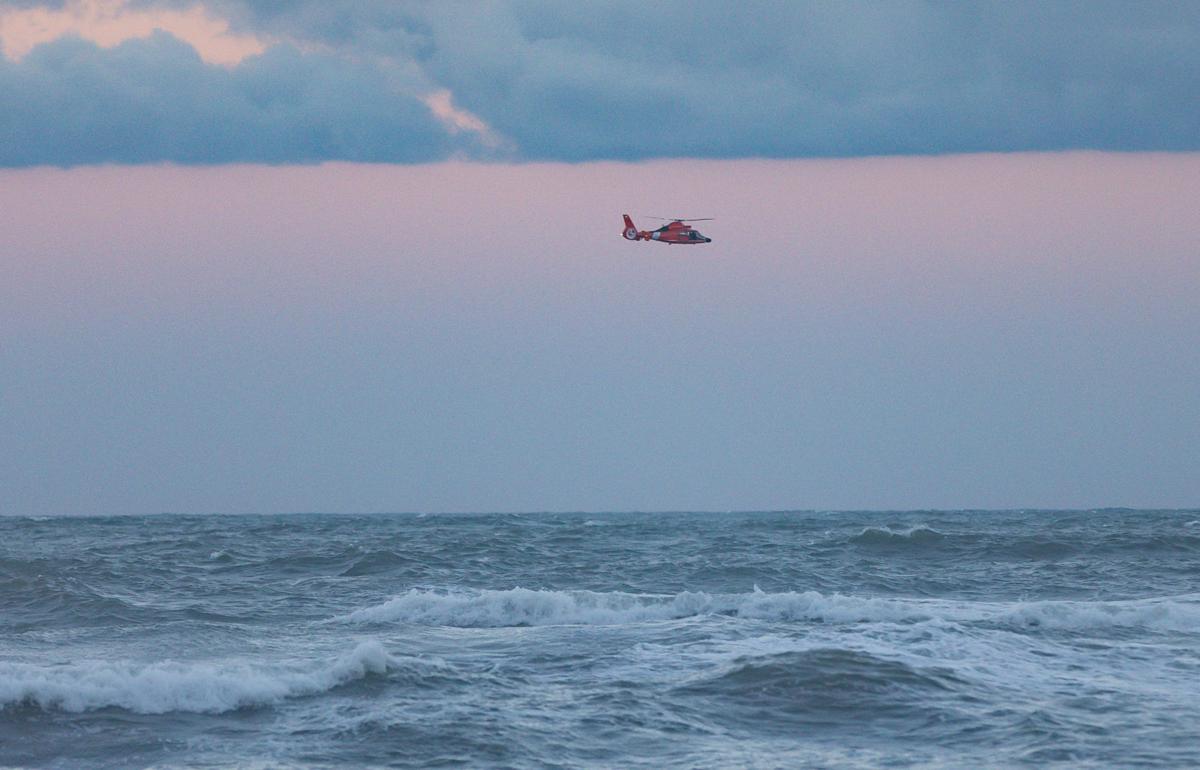 Police and Coast Guard search for a missing person off the beaches in Ventnor and Atlantic City on Friday.

"It is believed that the male victim assisted the two female swimmers to shore, thus putting himself in harm's way and ultimately sacrificing his own life," police Capt. Joe Fussner said.

The U.S. Coast Guard suspended all operations for recovery efforts, Fussner said Saturday afternoon, adding city police and lifeguards, along with those from neighboring jurisdictions, are still conducting periodic checks of the water.

The Press of Atlantic City also reached out to the Coast Guard for an update.

Fussner said the department received a 911 call for a distressed swimmer at 6:53 p.m. Friday and had officers on the beach within a minute or two.

"They observed the male 50 yards off the coast, several blocks south from his initial location," Fussner said. "The condition of the ocean was extremely rough."

For the tenth time since 1900, there is a tropical system that has made landfall in South Je…

Fussner said rescue units from Ventnor, Atlantic City and Margate's fire departments and beach patrols responded in addition to a helicopter and boats from the Coast Guard station in Atlantic City. Unfortunately, the officers lost sight of the man and didn't see him again.

Police don't know why his friends were able to get out of the water and he wasn't.

The municipal departments searched the beach and the water using personal watercraft until 8:58 p.m. Friday, when darkness forced them to quit. The Coast Guard still had an MH-65 Dolphin rescue helicopter on scene as of 10 p.m. Fussner said all three cities would have officers on the beach through the night and the water search would resume Saturday.

The man's name isn't being released pending contact with his family.

Gov. Phil Murphy on Saturday reported an additional 438 new COVID-19 cases across the state, along with 49 additional deaths.

'Kind, caring' teen died in ocean off Ventnor beach trying to save others

VENTNOR — Mark Alston said he was shocked his younger brother lost his life Friday in the Atlantic Ocean off Victoria Avenue.

WILDWOOD — A Philadelphia man is being lauded as a hero for saving a woman from drowning Monday night.

Tropical Storm Isaias is on track to arrive in South Jersey on Tuesday evening, but local seas already are building.

ATLANTIC CITY — A boy and a girl were pulled from the ocean by lifeguards in separate incidents over the past week, adding to the more than 1,…

Walking on the Atlantic City Boardwalk last week, Valeria Marcus said she saw only a mother and her daughter wearing masks. The majority of pe…

Police and Coast Guard search for a missing person off the beaches in Ventnor and Atlantic City on Friday. The Coast Guard suspended its search Saturday for a recovery mission.

Police and Coast Guard search for a missing person off the beaches in Ventnor and Atlantic City on Friday.