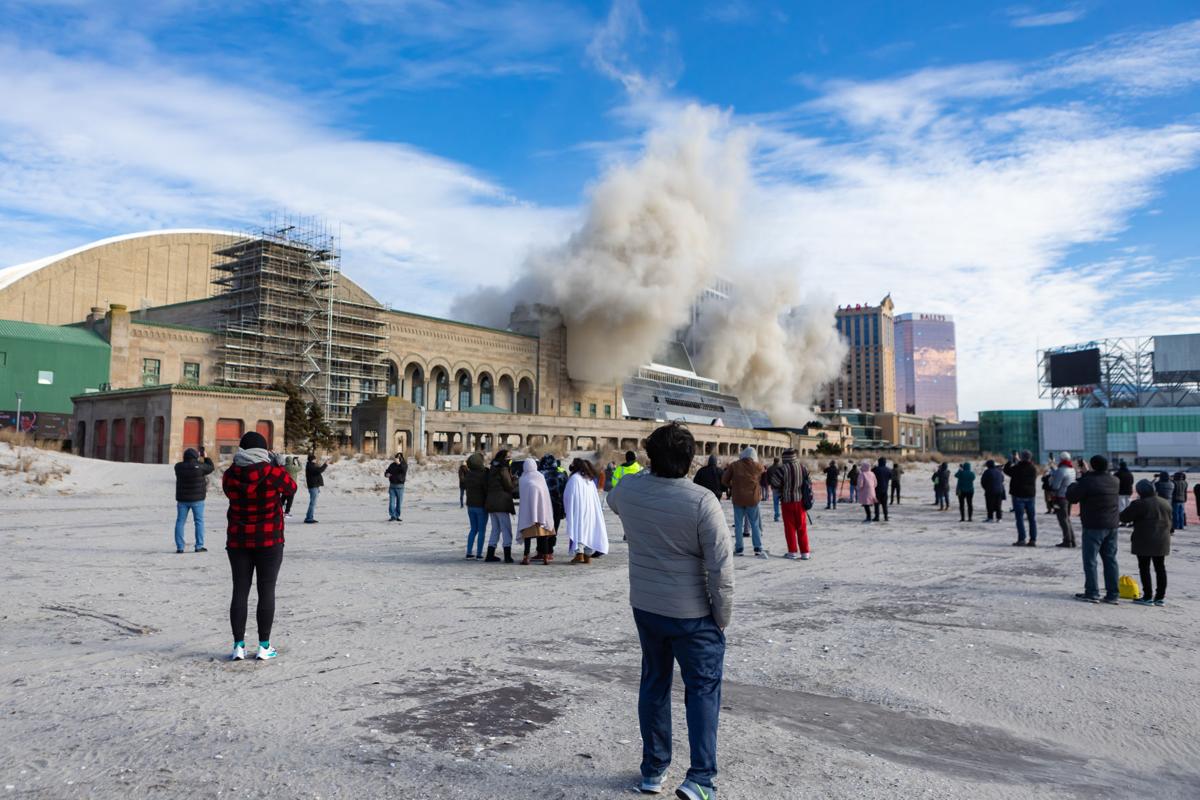 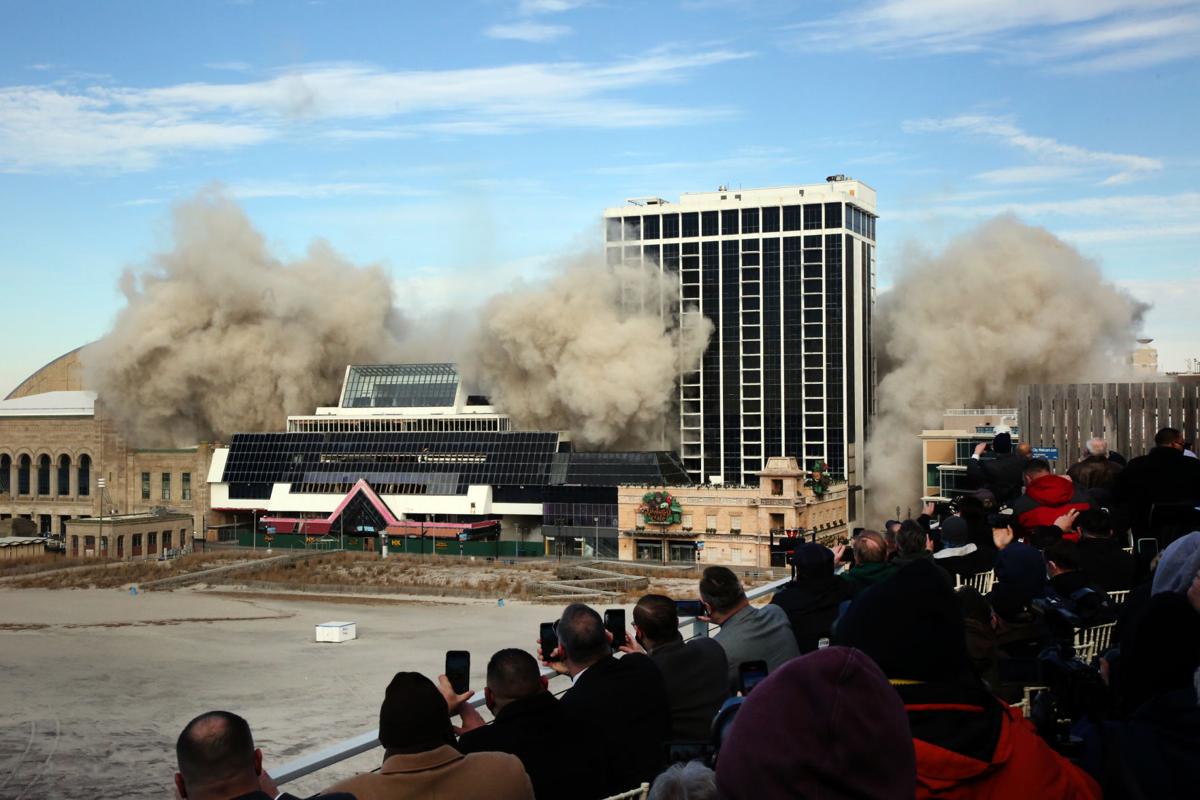 The former Trump Plaza Hotel and Casino is imploded as seen from the One Atlantic pier, in Atlantic City, Wednesday, Feb. 17, 2021. (VERNON OGRODNEK / For The Press) 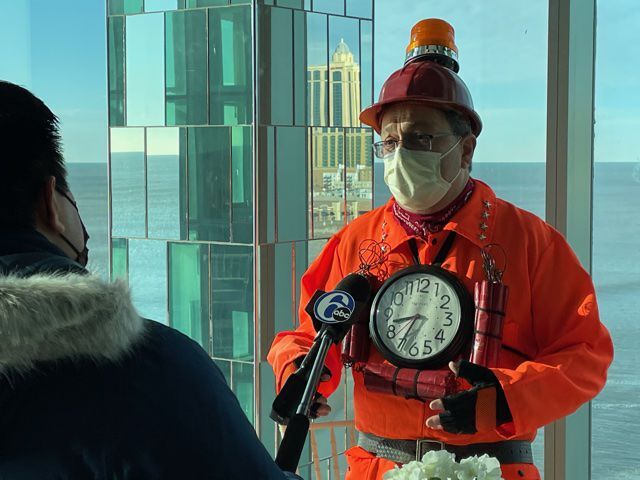 ‘Implosion Man’ Louis Woloszyn, of Philadelphia, was dressed like an explosive device for the Trump Plaza implosion Wednesday.

ATLANTIC CITY — The implosion of the 39-story Trump Plaza casino tower went off at 9:08 a.m., just a few minutes later than scheduled Wednesday, delayed as a few pedestrians were cleared from a closed Caesars Atlantic City parking garage.

As the long rumbling of the explosion finished, the building buckled from the back to the front, dropping straight down as intended.

The crowd of national and local media, officials and auction winners at a VIP party at the top of One Atlantic pier cheered, then ran inside to escape the smoke plume.

“Here comes the asbestos,” said a voice in the crowd. “It’s like snow.”

The Plaza was former President Donald J. Trump’s first casino in the city, opening in 1984, and its end followed closely on Trump’s political downfall. The city worked on getting current owner Carl Icahn to demolish the building for years, for public safety. Pieces of the building had been falling onto the street below, and it was an ugly, empty hulk in a prominent area of town.

The top of the roughly eight-story rubble pile could be seen just over the remaining glass frontage of the Plaza. That part will be demolished later, said Mayor Marty Small, leaving the former Plaza’s parking garage and one hotel tower to be sold with the site.

Craig Horsley, 61, a theater investor from Queens, New York, was one of 10 winning bidders at an auction to attend the VIP party and spend two nights free at casino properties, with two free dinners. The auction raised about $17,000 for the Boys & Girls Club of Atlantic City.

His interest was historical — he’s been coming to the resort since he was a kid on vacation, he said.

“I bid on pressing the button — my top bid was $30,000,” Horsley said of an earlier planned auction to be the one to implode the structure, also to benefit the Boys & Girls Club. It was stopped by Icahn due to safety concerns.

The bids hit $175,000 before the original auction was canceled, so Icahn donated that amount to the Boys & Girls Club. The auction of tickets to the VIP party, two nights in the city and two dinners went forward instead, raising almost $17,000 more.

ATLANTIC CITY — The city is poised for a development boom this year, including a new African…

Horsley said his winning bid was $600, which he called “a real bargain” compared to what he was willing to spend on the earlier auction.

The casino opened as Harrah’s at Trump Plaza in May 1984, with a 60,000-square-foot casino and 614 rooms, seven restaurants a 750-seat showroom and health club. Later that year, the name was changed to Trump Plaza to avoid confusion with Harrah’s marina property.

The entire Trump empire ended in bankruptcy, with Icahn as owner of the empty Plaza.

Another winning bidder of the VIP package was Louis Woloszyn, of Philadelphia, who dubbed himself “Implosion Man” as he was decked out in an orange suit with fake explosives attached.

“This started out as a bad Halloween costume in 1994,” Woloszyn said. That was the year he watched the Sears Catalog building imploded on Roosevelt Boulevard in Philadelphia, and he got hooked on implosions.

“The Sands implosion was awesome,” he said of the 2007 event in Atlantic City. “It was my first one at night, and they had fireworks before and after.”

Nothing has been built yet on the Sands site.

Woloszyn figures he’s seen about 10 implosions so far. Two things were different about the Plaza’s: The building was already taken down to a skeleton, and it was the first time a fundraiser was attached to the event.

He raised an additional $1,380 from friends and family for the Boys & Girls Club and presented the check Wednesday morning, he said.

James A. Sarkos, interim officer-in-charge of the Atlantic City Police Department, said the event went off well from a public safety standpoint.

Small was so excited about the eyesore of the former Trump Plaza coming down, he said he woke up at 4:13 a.m. and couldn’t get back to sleep.

“This is the best property in town. It needs no GPS,” Small said at a news conference after the implosion. “You just say, ‘Take the Atlantic City Expressway until it ends and you can’t go any further.’”

The mayor said he would like to see a family-friendly mixed-use development at the Plaza site to diversify the city away from over-reliance on casinos.

Casino Reinvestment Development Authority Executive Director Matt Doherty said later in the afternoon that Jim Whelan Boardwalk Hall, the closest building to the Plaza site, was unharmed by the blast. It was examined inside and out, Doherty said.

Small estimated it will take until about June 10 to remove all of the rubble from the implosion. Some people are interested in using some of it for an offshore reef, Small said, and he has helped them get in touch with the demolition company.

Asked if any of the rubble would be available as a souvenir, Small cautioned against going near the site.

“It might not have the danger of debris falling on you, like it did when the Plaza was up,” Small said, “but it’s still an active construction site.”

In fact, Pacific Ave between Missouri and Mississippi avenues will remained closed for the next four to six weeks due to cleanup, according go the city’s Office of Emergency Management.

The crush of dozens of national and local media outlets covering the implosion was impressive, but Small reminded them what comes later is what really counts.