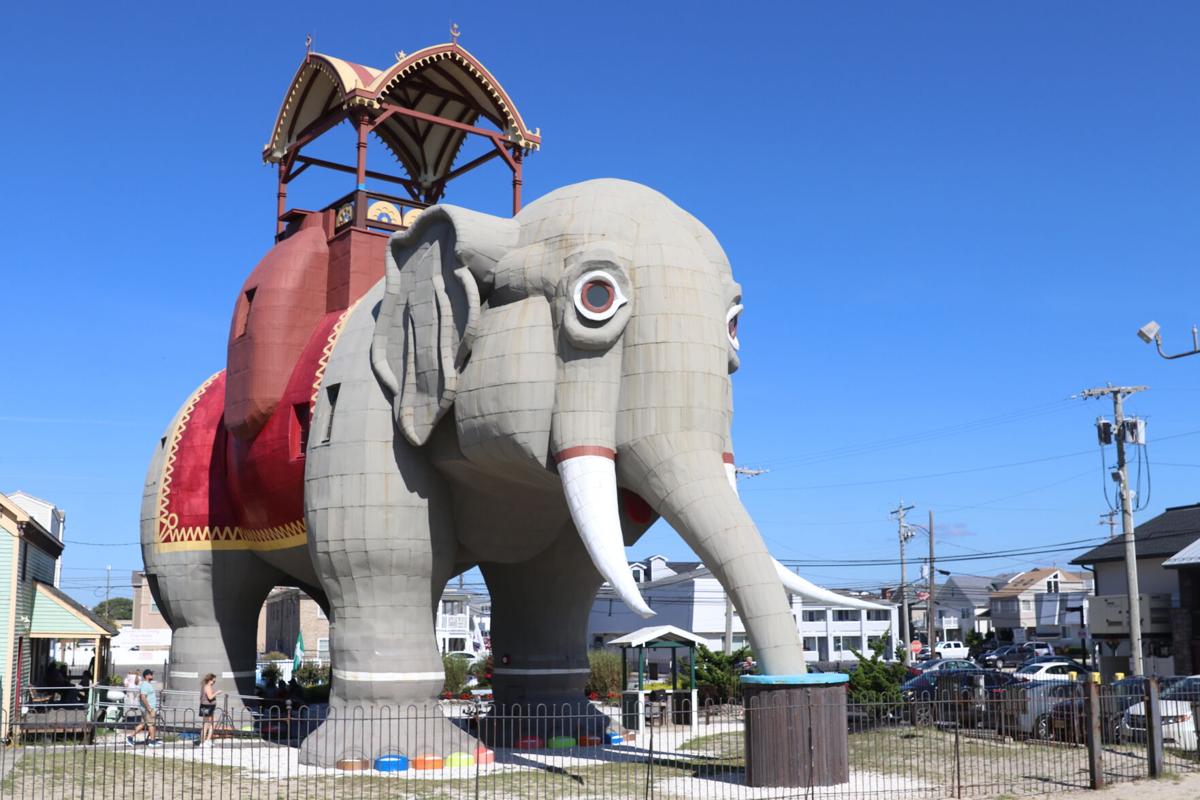 A $500,000 grant will go toward Lucy’s nine-month-long, multi-million-dollar makeover. 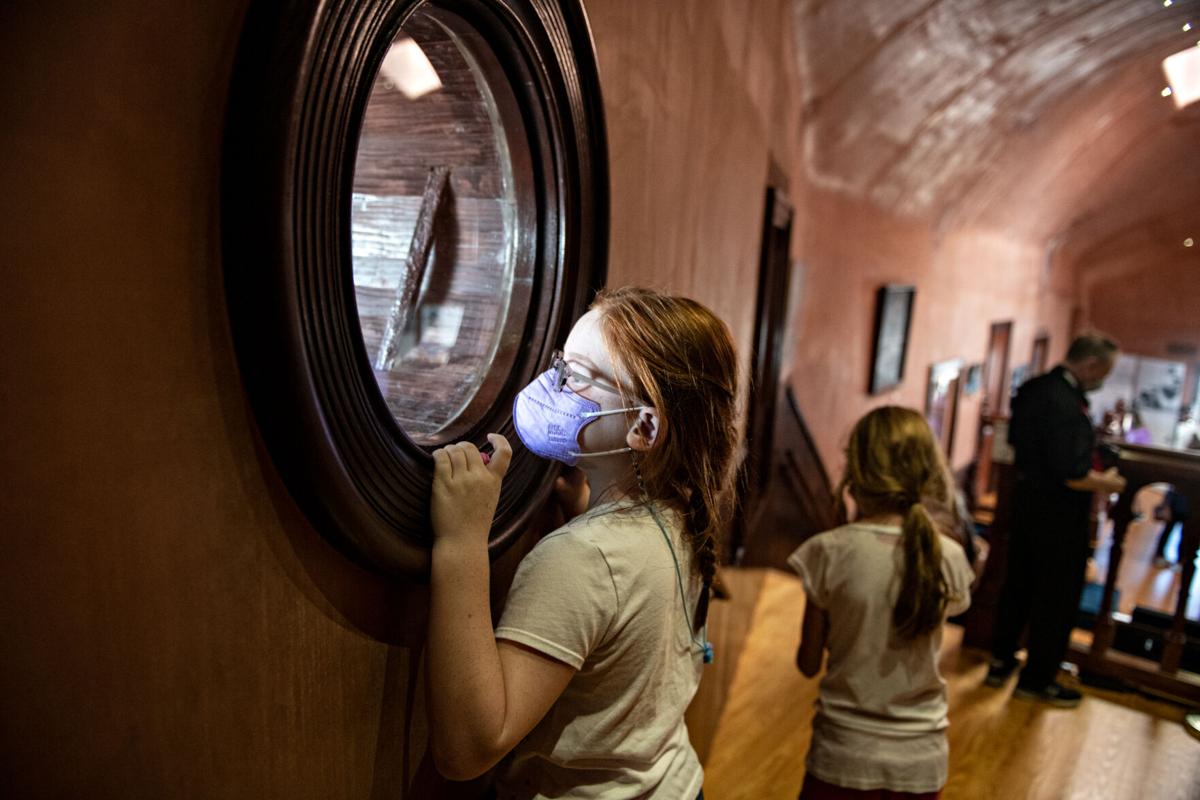 Ellen Estilow, 8, of Haddonfield, Camden County, takes a peek through one of Lucy’s eyes on Sunday, which was the last day the landmark will be open until next spring due to renovations. 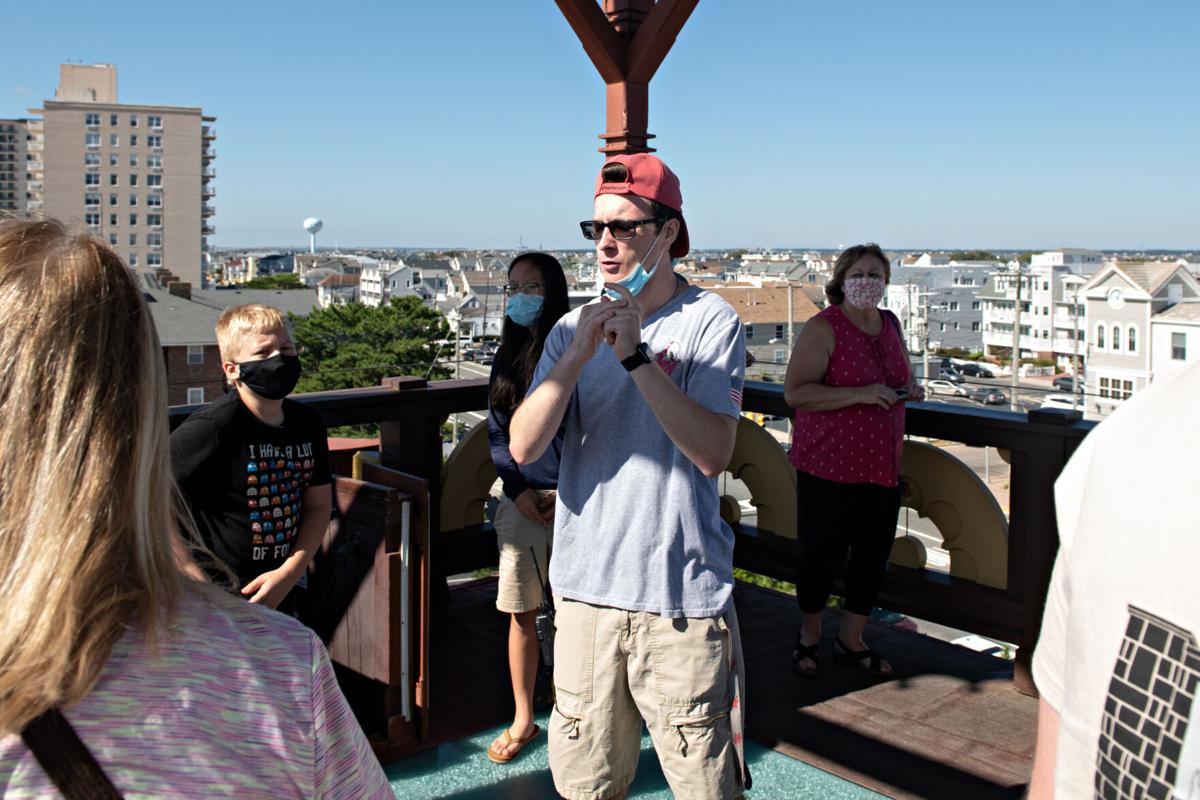 Tour guide Ian Schwadron, of Allendale Pennsylania, talks about the history of Lucy the Elephant from the howdah, the large carriage on top of Lucy’s back. 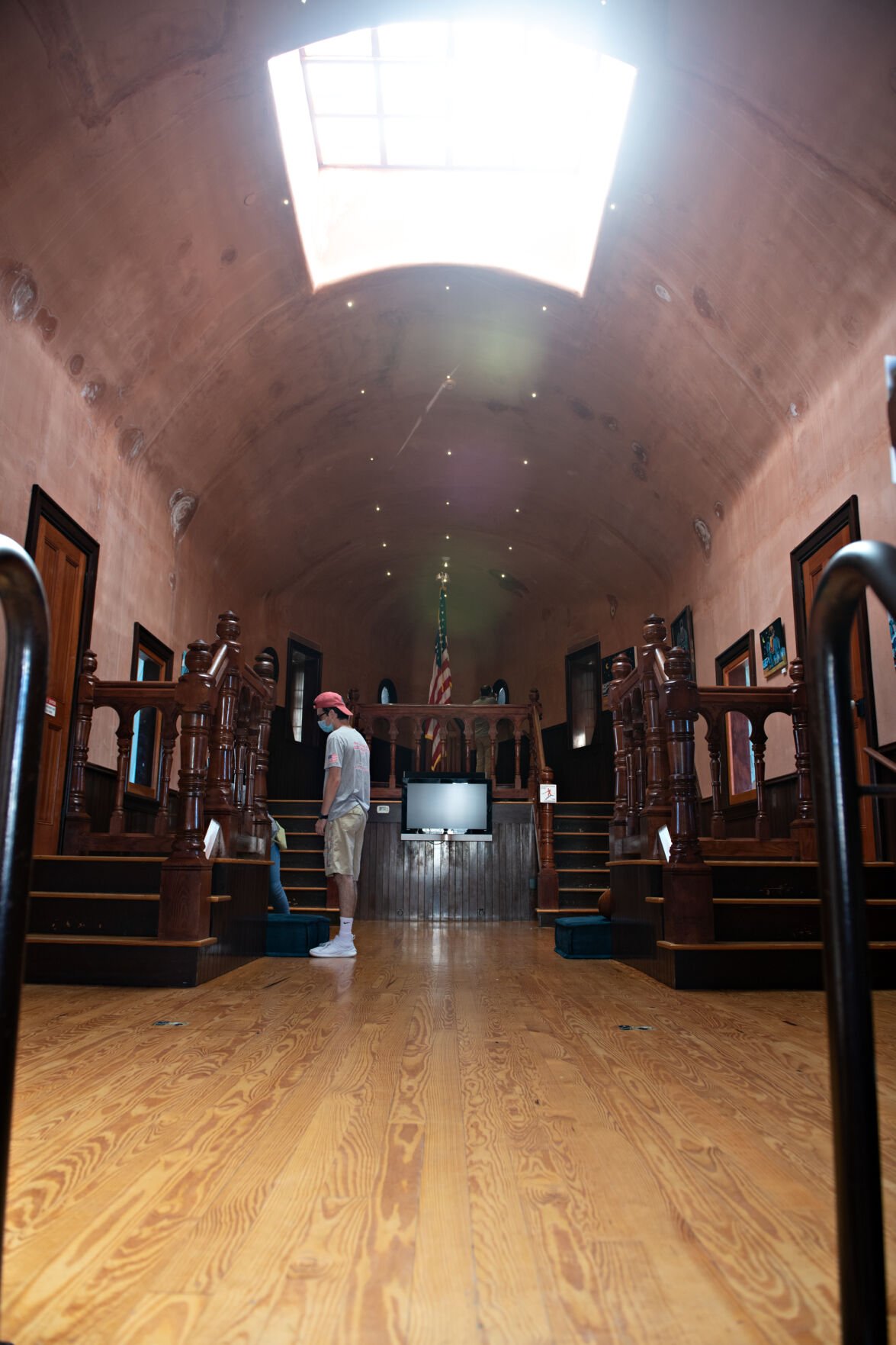 Tourists take part in one of the last tours of Lucy the Elephant on Sunday before the Margate landmark closes for a refurbishment project. 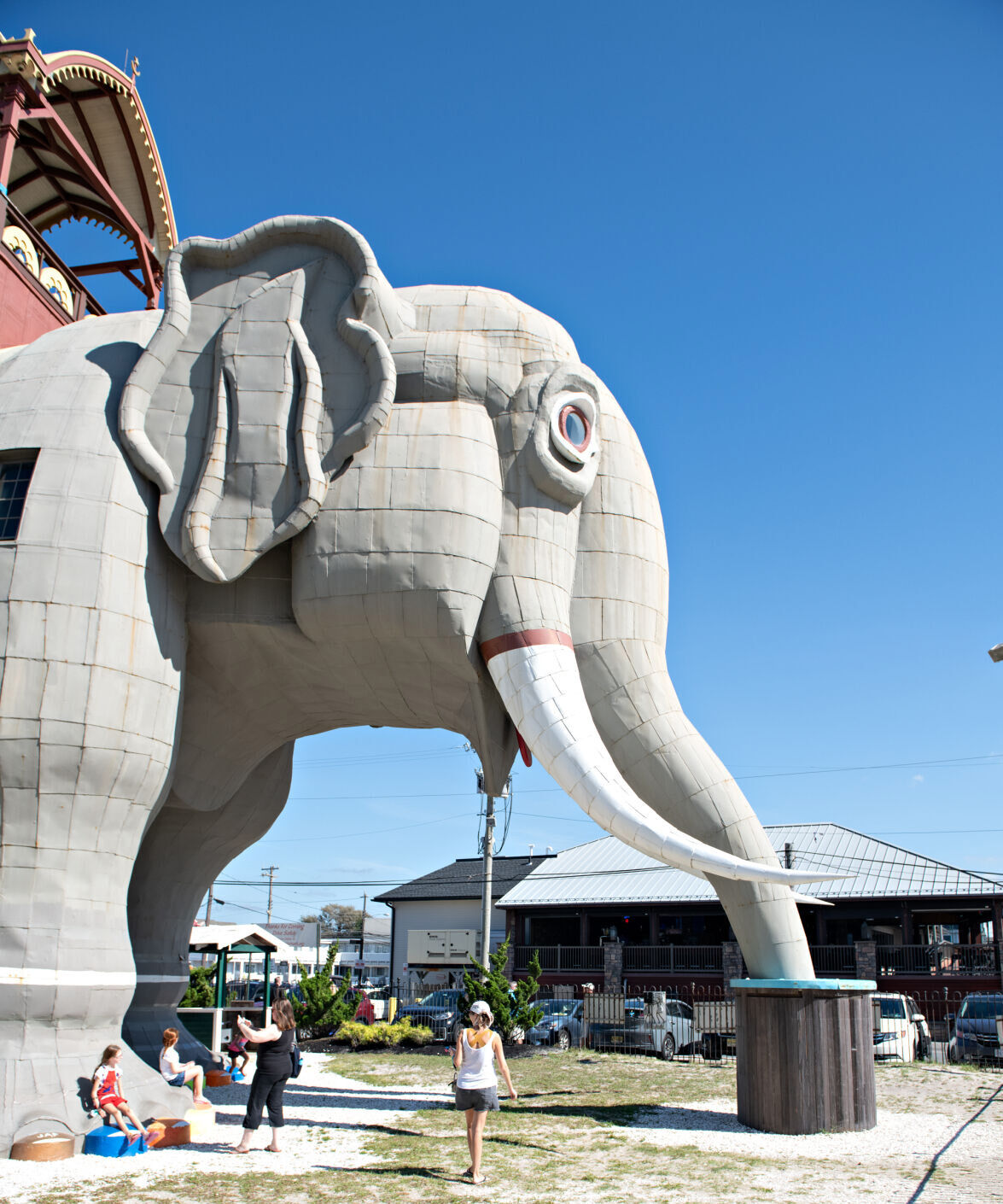 MARGATE — Matt Correll decided to visit Lucy the Elephant on a whim Sunday.

His girlfriend, Laura Herkenhan, loves elephants, he said. She was asleep in the car as they headed back home to Oxford Township, Warren County, after spending the weekend in Wildwood for the annual New Jersey Firemen’s Convention, and he decided to surprise her.

She was pleased to be on the tour. Ever since childhood, she has loved elephants. When she was a child, her mother used to buy her elephant figurines.

Krystole LaRosa also came at the last minute. She decided to take her 2-year-old son, Forrest Singley, to visit. They live near Allentown, Pennsylvania, and visit the beach every year, but had never been inside Lucy.

“He loves elephants,” LaRosa said. He likes to make an elephant noise, or try to come as close as he can, and on this visit, he learned the word ‘tusk.’

“He was very proud of that,” she said.

If they or the other visitors came back Monday, they would not have been able to tour the elephant-shaped building that has been a Margate landmark since the late 19th century. On Monday, scaffolding is set to go up for a $1.9 million renovation project, which will mean no tours until Memorial Day 2022.

This will be the largest renovation project since the building was moved a few blocks down the road in 1970, according to Richard Helfant, the executive director of the Save Lucy Committee.

The work is badly needed, he said. The cedar frame that holds the six-story structure up needs work, as does the metal skin on its exterior.

“We can’t paint it anymore. There’s so much that’s rotted or rusting badly, the experts thought it would be more cost-effective to do it this way,” Helfant said. More than half of the tin exterior is beyond repair.

Plans call for the entire building to be draped in a weatherproof cover, concealing Lucy from view. That will allow work to continue regardless of the weather.

The original plan called for a $1.4 million project, but materials and labor costs have increased since that estimate, Helfant said.

“It’s due to the three worst words in the English language: ‘Because of COVID,’” he said.

But the Save Lucy Committee will need more, with costs about $500,000 over the original estimate.

“That’s going to mean some aggressive fundraising,” Helfant said. “We just have to bite the bullet and do it.”

The committee’s funding comes from donations, tickets for tours and from the gift shop, which will remain open while the project is underway. But while the take from the gift shop brings in about as much as the tours, Helfant doubts it will make as much this winter.

“Without Lucy, who cares about a gift shop?” he said.

Lucy was close to demolition in the 1960s.

“It was minutes away from the wrecking ball,” Helfant said.

Lucy was condemned in 1962, after the major northeast storm that March. As a kid, Helfant would sneak in to the abandoned building and eat lunch, he said.

Local activists launched a campaign to raise money to save the building, raising enough to move it a few blocks to its current location at 9200 Atlantic Ave., overlooking the ocean. According to Helfant, most people at the time assumed the building would collapse in transit, but it made it, even though the trip took seven hours.

He advocates not painting the exterior, saying the metal will resemble elephant skin without painting, but that still has to be worked out with state historic preservation officials. Also to be determined is whether the howdah, the large carriage on top of Lucy’s back, will need to be removed or if it can be repaired in place.

This time, he said, plans include the installation of a vapor barrier, which will extend the life of the repairs.

On Sunday morning, under bright blue skies, about 15 people on the first tour of the day climbed the narrow wooden steps to the howdah to take in sweeping views of the beach and skyline. The visitors had a chance to roam the main room after a talk from tour guide Ian Schwadron and a short video on the history of the building, which was built as a roadside attraction in 1881 by James Lafferty.

Since that time, Schwadron told the visitors, it served as a summer home, a speakeasy and a tavern, and more recently and more briefly as an Airbnb. Visitors on Sunday looked out the round windows that form Lucy’s eyes and posed for photos against the upper rail with the ocean in the background, now knowing they’d be among the last to do so until at least next summer.

GALLERY: Look Back at Lucy the Elephant

Lucy the Elephant wins $500,000 grant for renovations from the National Park Service

MARGATE — The National Park Service recently announced that Lucy the Elephant was awarded a $500,000 grant for exterior restoration.

A $500,000 grant will go toward Lucy’s nine-month-long, multi-million-dollar makeover.

Ellen Estilow, 8, of Haddonfield, Camden County, takes a peek through one of Lucy’s eyes on Sunday, which was the last day the landmark will be open until next spring due to renovations.

Tour guide Ian Schwadron, of Allendale Pennsylania, talks about the history of Lucy the Elephant from the howdah, the large carriage on top of Lucy’s back.

Tourists take part in one of the last tours of Lucy the Elephant on Sunday before the Margate landmark closes for a refurbishment project.