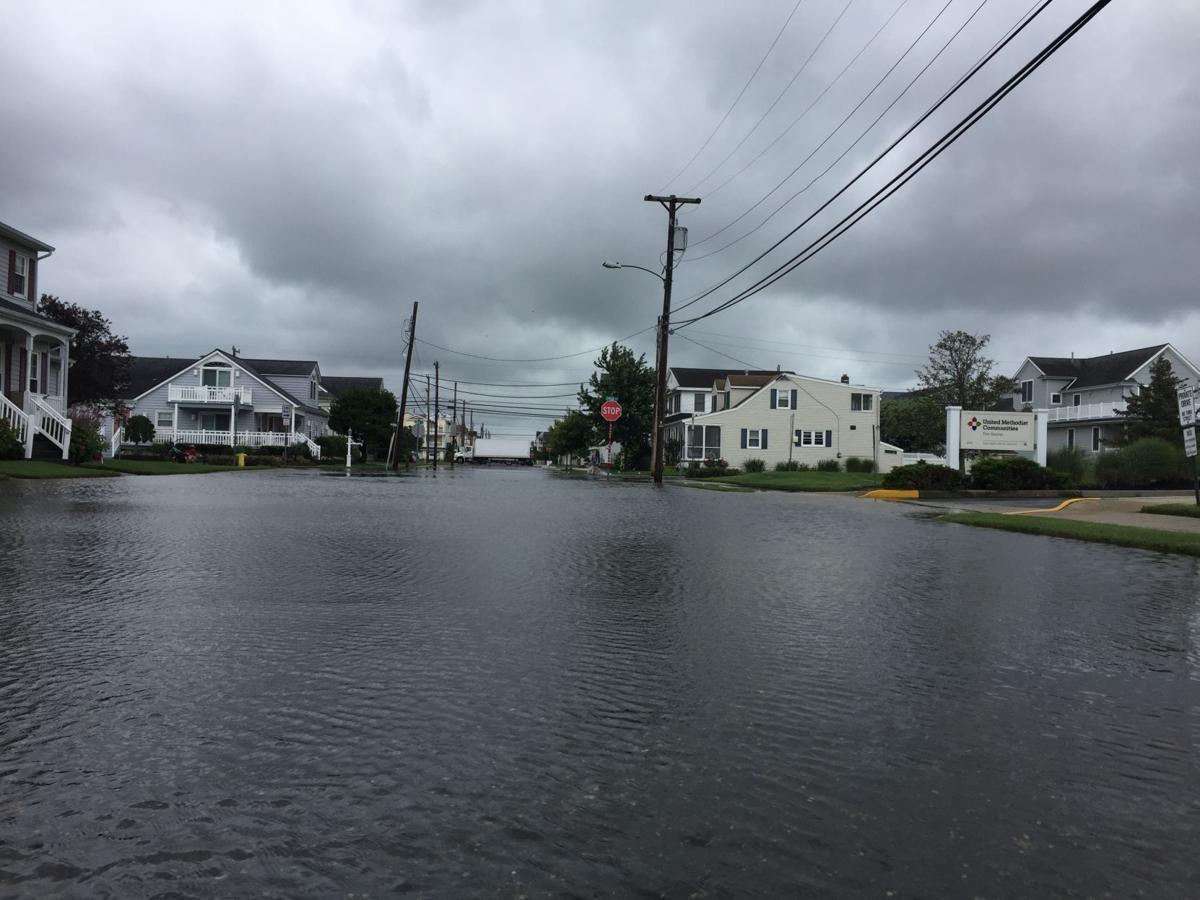 22nd Street in Ocean City looking at Haven Avenue during a flood. Ocean City is working on a flooding remediation project from about 28th to 33rd streets, from West Avenue to Bay Avenue. 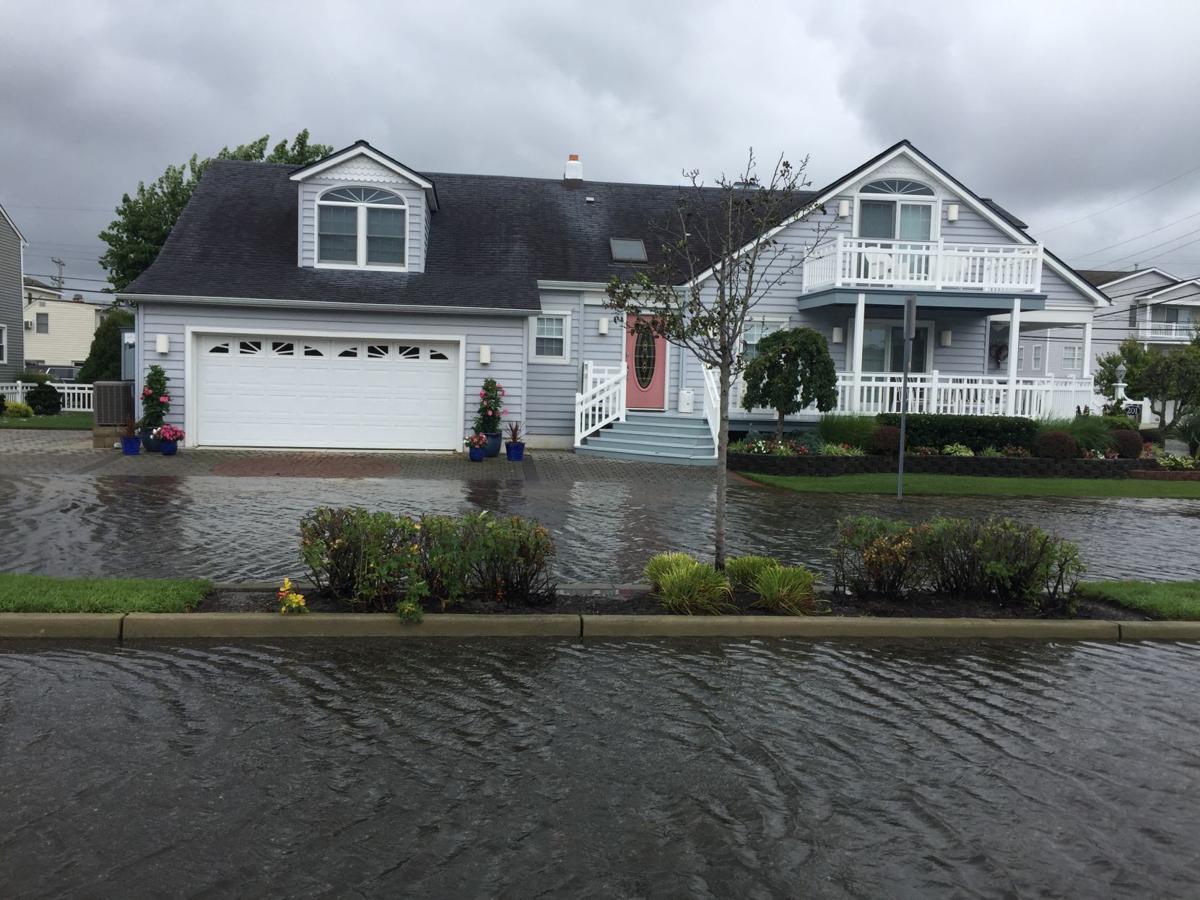 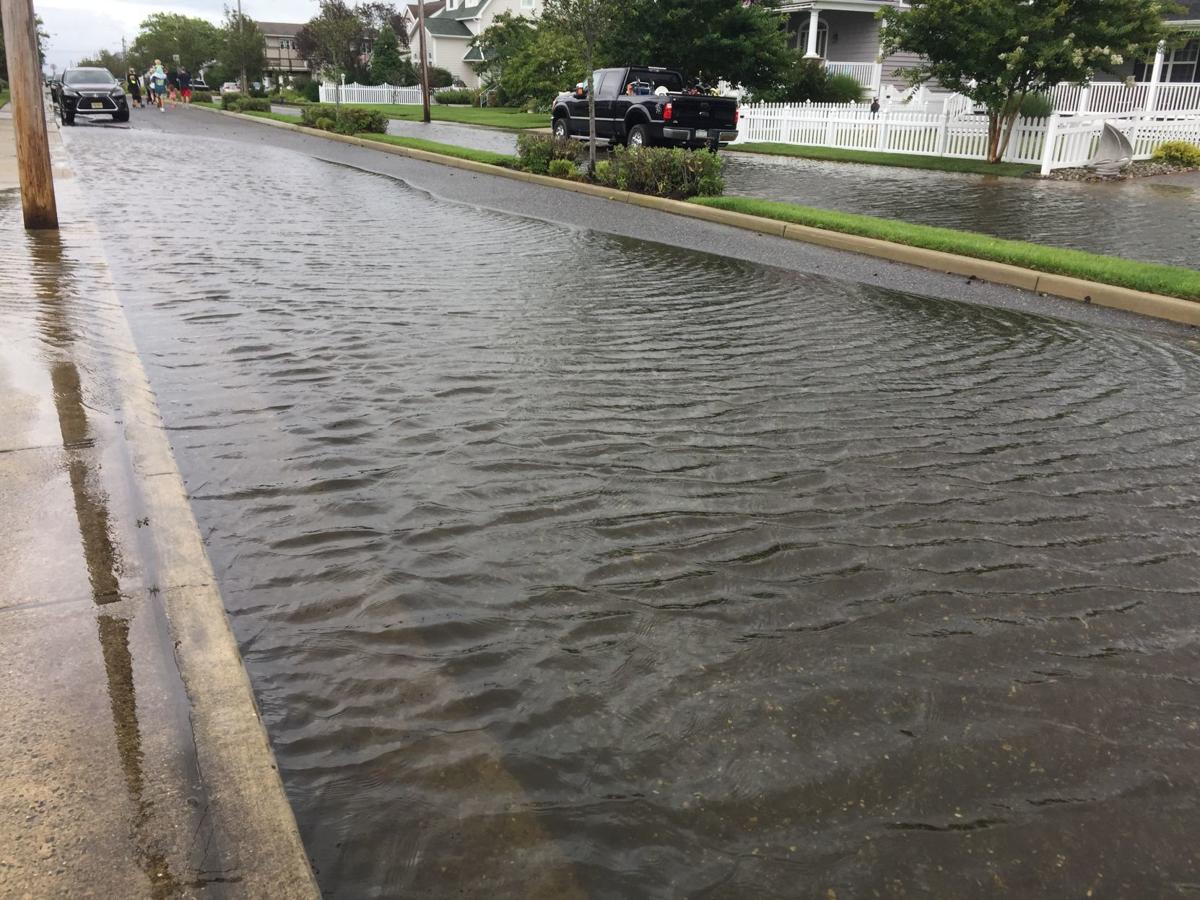 The Haven Avenue bike path at 22nd Street is underwater Saturday in Ocean City after a nor'easter passed over the region Friday night. 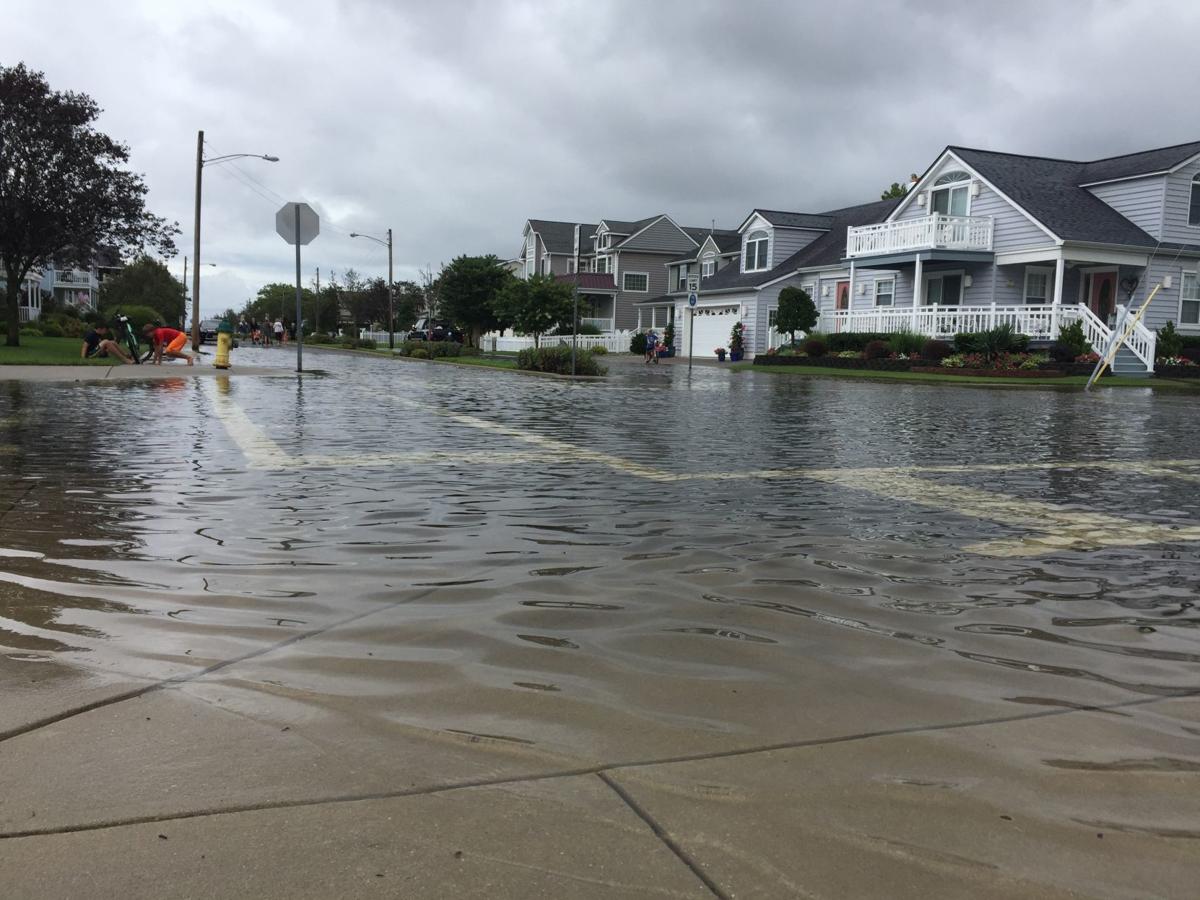 22nd Street in Ocean City looking at Haven Avenue during a flood. Ocean City is working on a flooding remediation project from about 28th to 33rd streets, from West Avenue to Bay Avenue.

The Haven Avenue bike path at 22nd Street is underwater Saturday in Ocean City after a nor'easter passed over the region Friday night.

Ocean City tops the list of New Jersey coastal towns with large numbers of properties projected to face chronic high-tide flooding by 2045, undermining real estate values and tax ratables, according to a new study by the Union of Concerned Scientists.

“(New Jersey) is always seen as the poster child for sea-level rise in the U.S.,” said study co-author Erika Spanger-Siegfried, the lead climate analyst for UCS, based in Cambridge, Massachusetts.

Even so, she called findings about New Jersey “pretty striking.”

Other communities predicted to be hard-hit include Atlantic City, Wildwood and parts of Long Beach Island. All face regular flooding of 36 to 40 percent of their homes. Other shore communities fared little better.

Chronic inundation is defined as having street flooding at least 26 times a year, Spanger-Siegfried said, and does not include storm-related flooding.

Andrea Palermo’s life has taken on the ups and downs of the tides she follows on her phone app.

Ocean City NJ Flooding is a subcommittee of the watchdog group Fairness in Taxes. It has 2,500 members, which is about a third of the year-round population of the island, and is working with a hydrologist from the American Geophysical Union to advocate for flooding issues at the state level, she said.

“Risen or rising, extreme tides already are part of life on our barrier island,” Gillian said. “Ocean City is making unprecedented investments in infrastructure upgrades, revising building codes to require construction at safe elevations and working with outside consultants to study other measures.”

A warming climate is causing sea level to rise, according to the UCS and other researchers. Sea level rises because of thermal expansion of warming ocean water; melting of land-based ice sheets, especially in Antarctica; and the sinking of land due to geological forces.

The polar ice cap is melting, our ocean is expanding and New Jersey is sinking.

Government policies encouraging building or rebuilding at the shore can make matters worse.

“Roughly 2,600 of the coastal New Jersey homes at risk by 2045 were built or rebuilt after Hurricane Sandy devastated the region in 2012,” the report said.

Real estate agent Gary Jessel, of Fox Real Estate in Ocean City, said potential home buyers have been more concerned about flooding since Sandy. But homes rebuilt after Sandy, and many built in the past 15 years, exceed federal standards and avoid problems of older, nonelevated homes, he said.

“You are never going to end it,” he said of flooding. “You are living on an island. But it’s not a problem with (newer) homes.”

The interactive map with this story allows readers to click on specific communities to see how much real estate is projected to be at risk.(tncms-asset)ce723b9e-70b2-11e8-b207-00163ec2aa77[3](/tncms-asset)

Property on the bay side of most barrier islands in New Jersey is most at risk, said Spanger-Siegfried.

“Being on the ocean side of barrier islands provides some protection,” she said. “Those parts tend to have higher elevation than the bay side.” And they benefit from beach replenishment.

Back bay flooding is much more difficult to address, she said.

The study uses the higher of three scenarios projected for sea-level rise by the National Climate Assessment of 2014.

Leary Hornick said Ocean City is working on a flooding remediation project from about 28th to 33rd streets, from West Avenue to Bay Avenue. It is one of several projects the city has undertaken to address flooding in specific neighborhoods.

But it will only be a temporary fix without a comprehensive, island-wide plan, Leary Hornick said. And it may just move water to new areas.

“It’s a Band-Aid on an amputation,” Leary Hornick said. “What we need is short-term and long-term flooding remediation island-wide.”

Some marshes look darker and grayer this spring, but that’s a good thing, biologists and wet…

A new tool may tell us where Delaware Bay sand travels

After years of rebuilding Delaware Bayshore beaches decimated by Hurricane Sandy, the Americ…

BRIGANTINE — Thirty years is a long time by human standards, and the blink of an eye at the …

Environmental groups have list of priorities for friendly new governor

After eight years of battles with Gov. Chris Christie’s administration, the state’s environm…

South Jersey is home to some of the best places on the East Coast for marshes, plants and an…

N.J. commercial properties at risk by 2045

N.J. commercial properties at risk by 2100

number of homes rebuilt after Sandy at risk by 2045

years in a conventional mortgage

homes in Atlantic City and Wildwood at risk by 2045, where about one-third of people live in poverty

"Properties will not be the only things to flood. Roads, bridges, power plants, airports, ports, public buildings, military bases and other critical infrastructure along the coast also face the risk of chronic inundation. The direct costs of replacing, repairing, strengthening or relocating infrastructure are not captured in our analysis." p. 2.

"Even as the reality of sea level rise has become clearer, development in flood-prone locations has burgeoned. Fifteen to 20 percent of the at-risk homes in 2045 and 2100 in both Florida and New Jersey were built or rebuilt after the year 2000." p. 7.

"New Jersey (and Louisiana, North Carolina and Maryland) also have significant numbers of highly exposed communities with above-average rates of poverty. ... People living in these doubly vulnerable communities stand to lose the most, yet have fewer resources to adapt to flooding or relocate to safer areas."

I sat down with Michelle Brunetti Post to talk about our year long series into coastal flooding in South Jersey, Rising Waters. This is the fi…

Tourists and hurricanes — we're ready for you

A flood insurance program heavily subsidized by taxpayers and $25 billion in debt will end July 31 if not reauthorized by Congress.

Meeting on back bay flooding in Ventnor on Wednesday night

Back bay flooding and how to combat it will be the subject of meetings Wednesday evening in Ventnor and Thursday in Toms River.

SEA ISLE CITY — For the residents of this small coastal community, one out of three of whom are seniors, Hurricane Sandy was an eye-opener.

In Atlantic City, a century-old solution to flooded streets is working again

ATLANTIC CITY — The resort can thank its great-great-grandparents for installing a major flood control system more than 100 years ago.

Study: Flooding has cost this Jersey Shore town $5.3B in home value losses

New Jersey has lost $4.5 billion in appreciation of home values since 2005 because of flooding related to sea-level rise, and Ocean City has l…

What will Ocean City do with $9M car lot? Block high-density housing

OCEAN CITY — City Council wants to buy 1.86 acres next to the Ocean City Community Center for $9 million to prevent high-density housing from …

The state Department of Environmental Protection’s ninth annual WILD Outdoor Expo — with more than 100 exhibits, demonstrations and seminars a…

Rutgers team may have evidence of earliest life protein

NEW BRUNSWICK — A team of Rutgers University researchers has modeled a simple protein that could help explain the start of life on Earth.

Projects to reduce back bay flooding still decade away

VENTNOR — A draft plan to lessen back-bay flooding in the state should be ready for public comment soon, but construction is still almost a de…

The first large coastal storm of the fall is brewing and will begin to bring rain, wind and coastal flooding as we enter the weekend.

We start mostly sunny, but clouds quickly build during the day. Highs will be in the 50s. Then, the coastal storm arrives.

9 things to know about the weekend coastal storm

The advisories, watches and warnings are up, the rain is closing in on South Jersey and we will await our first coastal storm of the "cold" se…

81% of the Jersey Shore is paved, and water has nowhere to go

Sea-level rise will make most of Atlantic City uninhabitable by 2100, report says