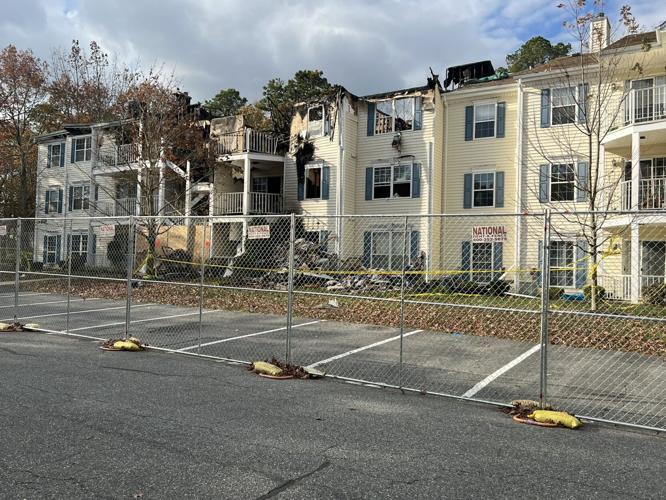 Metal fencing and posted signs surround an apartment building damaged by a three-alarm fire in Galloway Township on Oct. 29. Firefighters work the scene of the blaze Oct. 29 on Apache Court in Galloway Township.

GALLOWAY TOWNSHIP — It was shortly after 5 a.m. Oct. 29 when residents saw the first signs of fire at the apartments at Apache Court.

The fire spread quickly, and by the time the first call came into the township’s 911 emergency dispatchers, residents in the apartment complex were up and out their doors, raising the alarm and awakening their neighbors.

“Flames are coming out of the apartment,” said the first caller.

The woman told the dispatcher the fire was on the third floor. The dispatcher asked whether she knew if anyone was in the unit. The caller replied: “I know somebody lives up there, but I don’t see anybody.”

More calls arrived, with more information, and a growing sense of panic.

“There’s somebody trapped!” one caller frantically told a dispatcher.

One caller can be heard screaming as a dispatcher, unsure of her location, urged her to get outside to safety.

On Tuesday, police confirmed that human remains were discovered in the rubble of the building. Authorities had not yet identified the victim. While arson is not suspected, authorities said they are still investigating the fire and have not released the cause.

The Press of Atlantic City obtained the 911 calls and incident detail reports from both police and the township’s fire companies through an Open Public Records Act request.

According to the records, authorities that day located all of the units’ occupants, except for one woman.

Details also reported that a cadaver dog was brought on scene shortly after 10 a.m., according to a copy of the police incident details. The dogs are commonly brought in to search for human remains.

Other log entries in the report showed police obtained contact information for the one missing resident but were unable to locate her at AtlantiCare Regional Medical Center, Mainland Campus, or with relatives. Attempts to reach her through her cellphone went straight to voicemail when police called it, the records showed.

When contacted, T-Mobile said the woman’s cellphone pinged off a tower near Wrangleboro and Moss Mill roads about 9:03 p.m. Oct. 28, a short distance from the fire scene.

As of Thursday, the remains had yet to be positively identified, police Capt. Eric Hendrickson said.

The fire started in Unit 27 of Apache Court, spreading quickly throughout the building’s 18 units.

The fire was brought under control about 7:18 a.m., according to a log entry from the township fire prevention bureau.

Several residents and one police officer were treated for smoke inhalation.

The scene outside the damaged units was quiet on a recent morning. A pile of debris sat nearby. Fencing and signs warned that the building was unsafe and shouldn’t be approached.

Eliana Esposito and her godmother, who live in a next-door apartment building, were still rattled by the fire.

“We’re never prepared for anything that happens like that,” Esposito said while standing outside her front door Thursday. “Who can be prepared? How do we know when it’s going to happen?”

Esposito was celebrating her birthday with friends before she went to bed about 3 a.m. Oct. 29, only to be woken unexpectedly by a bright light coming through her window hours later.

Flames were shooting from the next-door building. Smoke filled the neighborhood, and debris began falling from the sky, she said.

“I was really shocked,” Esposito said.

Gabriel Alejandro lives in another apartment building on Apache, about 100 yards from the one that caught fire. He found out about the fire through friends, who texted him to check on him while he was in Florida.

“I came back, and I was glad to see it was here,” Alejandro said of his building. “I didn’t know someone had passed away.”

Having people displaced this time of year is especially hard, Alejandro said.

“With Christmas coming up, that’s going to be a hardship,” he said.

Mainland alumnus goes to Washington as aide to Ohio senator

ATLANTIC CITY — For hundreds of people in the area who weren’t fortunate enough to have food on their plates, a roof over their head, or famil…

Two-time NICU mom looks back on time at hospital

It’s usually a happy day for expecting mothers when they welcome their newest bundle of joy into the world.

Metal fencing and posted signs surround an apartment building damaged by a three-alarm fire in Galloway Township on Oct. 29.

Firefighters work the scene of the blaze Oct. 29 on Apache Court in Galloway Township.