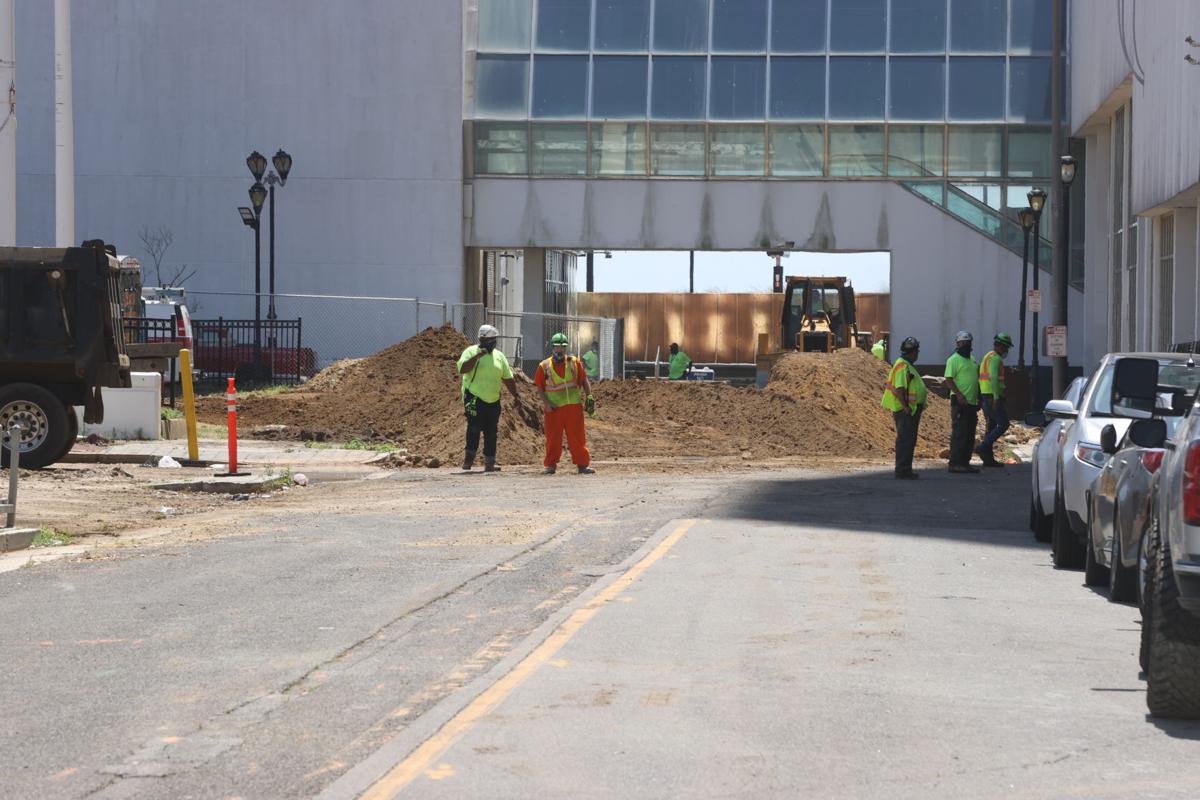 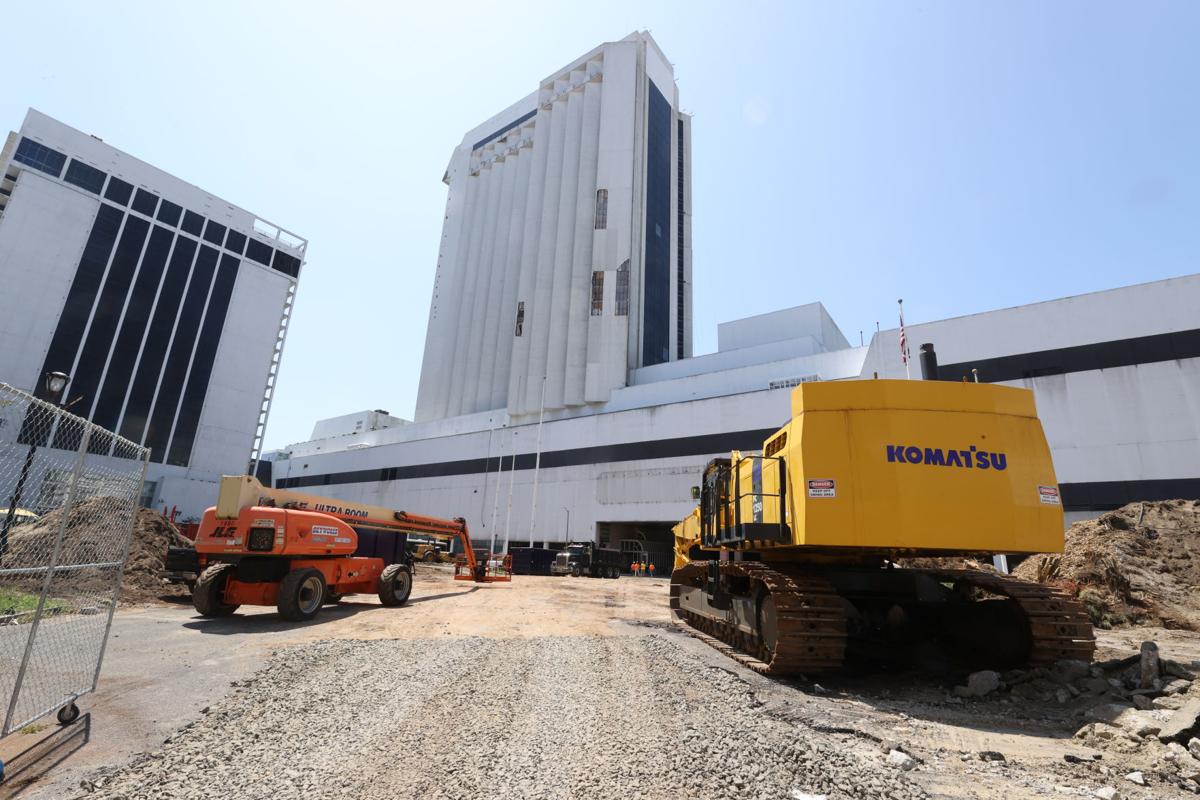 Construction crews have started the process of preparing the forme Trump Plaza casino in Atlantic City for demolition. 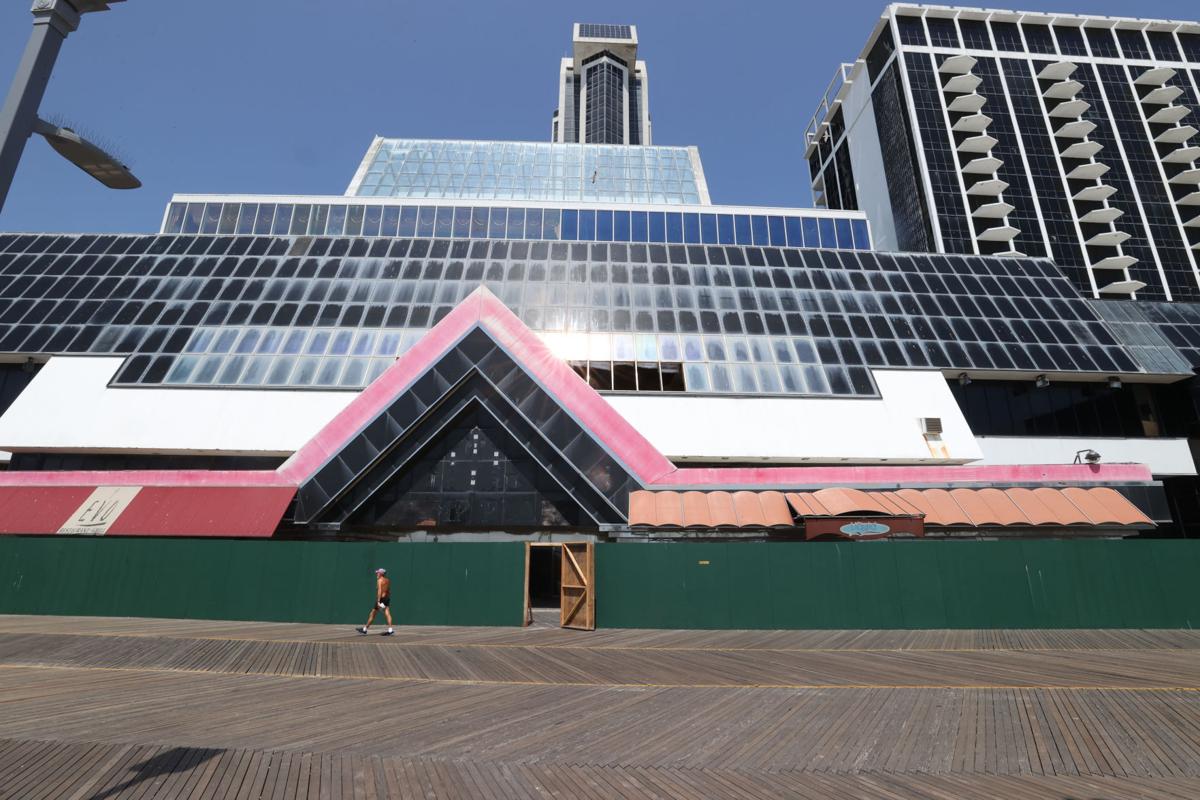 ATLANTIC CITY — The process of eliminating the former Trump Plaza casino from the resort’s skyline will still end with the boom of an implosion sometime next year.

But this month, a demolition crew from Pennsylvania began the slow work of gutting the interior and taking down portions of the building in preparation for the implosion.

The 10.5-acre property is owned by billionaire Carl Icahn.

On Monday, a small group of evangelical marchers, urging people to repent, noisily walked by along Pacific Avenue with signs and bullhorns, an event apparently unrelated to the work at the once-iconic casino.

Equipment from Haines & Kibblehouse and large mounds of dirt were on the property. Demolition had begun at part of a lower level next to one of the towers.

The entire property, including its Boardwalk frontage, has been fenced off. A Rainforest Cafe in a separate building on the property continues to operate on the Boardwalk.

Trump Plaza Hotel & Casino opened on May 14, 1984, with a top-coated Donald Trump posing for photos on a casino floor of purple carpets, red walls, and mirrored ceilings and chandeliers. It closed for good Sept. 16, 2014, one of four casinos in Atlantic City to close that year.

Its Trump logos were removed or painted over under pressure from the Trump Organization. Trump himself was no longer an owner at the time of its closure.

By its end, the casino sported stained carpet, squeaky revolving doors, and failing room service. Since closing, it has served as a backdrop for a Hillary Clinton rally, a spot for historical tours of Atlantic City, and a worsening eyesore as pieces of its white facade have come crashing to the ground.

Atlantic City Mayor Marty Small Sr., who has long advocated for the building’s demolition, said Tuesday that a final timeline was still being worked out. He wants the building down by February, while Icahn has submitted plans for a June 2021 timeline.

Small said he believed Haines & Kibblehouse was installing an elevator to facilitate gutting of the building’s interior.

The property, with a main tower and an east tower, sits at the center of the Boardwalk, at the foot of the Atlantic City Expressway. The city hopes the property can be sold or leased and then developed, possibly as an extension of the nearby Tanger outlets.

The resilient seaside resort, which never closed its beaches or Boardwalk during the coronavirus shutdown, has been packed with visitors this summer despite having no available indoor dining.

Trump was cut out of any ownership take of his Atlantic City properties in 2009, other than a 10% fee for the use of his name on what were then three Trump casinos in the city, including the Trump Marina and Trump Taj Mahal. That ended when Icahn took ownership of the company.

Crews began working on the demolition this summer after Atlantic City went to court, claiming the building was unsafe and posed a risk to the …

Atlantic City is shocked — shocked! — over Trump's tax revelations stemming from his casinos

After 25 years in Atlantic City and multiple bankruptcies that left behind a parade of unpaid casino creditors and investors, Donald Trump has…

ATLANTIC CITY — Bids to push the button and implode the former Trump Plaza Hotel & Casino have topped $62,500 as of Thursday afternoon.

ATLANTIC CITY — Bids to push the button and implode the former Trump Plaza Hotel & Casino have topped $175,000 as of Wednesday afternoon.

ATLANTIC CITY — Bids to push the button and implode the former Trump Plaza Hotel & Casino are holding at $175,000 as of Monday morning.

Construction crews have started the process of preparing the forme Trump Plaza casino in Atlantic City for demolition.