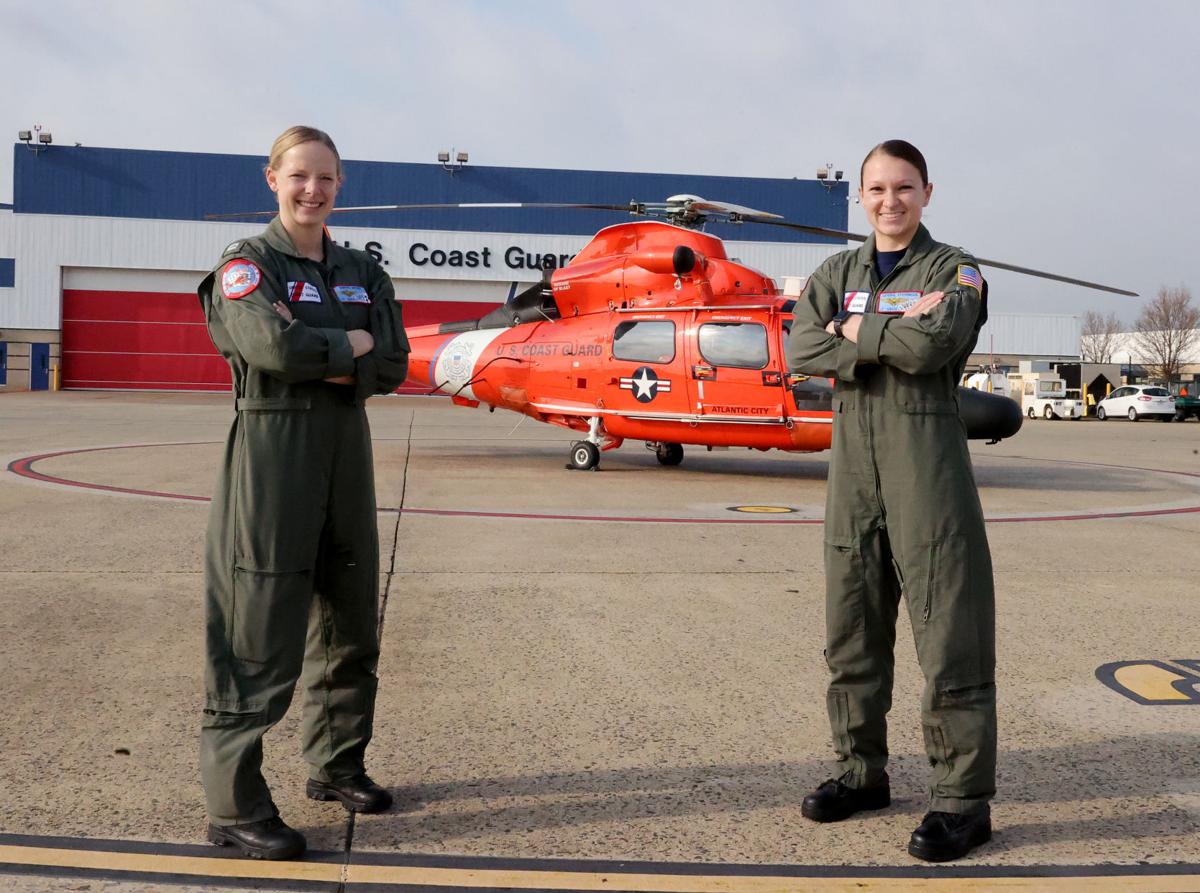 U.S. Air Force Staff Sgt. Christine M. Ampole, a crew chief at the 177th Fighter Wing of the New Jersey Air National Guard, checks a U.S. Air Force Thunderbirds F-16 for safety ahead of the Atlantic City Airshow in 2019 at the base in Egg Harbor Township.

U.S. Air Force Lt. Col. Jessica A. Lewis, 41, commander of the 177th Aircraft Maintenance Squadron, works in her office March 14 at the 177 Fighter Wing in  Egg Harbor Township. Lewis has been with the 177th Fighter Wing for over 20 years.

“I’m an adrenaline junkie, so I’d always run out there and get excited and say, ‘Yeah, that’s what I want to do,’” said Steinbeck, 27.

Christi McGee, who grew up sailing in Florida, knew she wanted a career on the water. While attending the U.S. Coast Guard Academy in New London, Connecticut, she took a flight lesson and immediately fell in love with flying.

Both women are helicopter pilots in the Coast Guard at Air Station Atlantic City in the township. While the aviation industry has seen more women in the past few decades, they are still a sliver of the workforce population.

Women a driving force in transportation jobs across state

When Joselyn Wall was younger, she simply wanted to be rich.

According to a 2019 report from the Federal Aviation Administration, 7.9% of pilots are women. Only 2.5% of aircraft mechanics are women.

“As a flight mechanic, I get one of the best views in the helicopter when I get the chance to hang outside the door,” she said.

Garnett grew up in Florida and met several people who worked in Coast Guard aviation. After attending community college, she wanted to find a way to travel and provide a roof over her head.

“The Coast Guard seemed like a reasonable option, so I reached out to a recruiter who, coincidentally, also happened to be in aviation and cherished his career,” she said. “When I decided to join, I knew there was only one route for me to pursue. Aviation was exciting and foreign and has definitely provided the traveling that I have dreamed of.”

The 177th Fighter Wing of the New Jersey Air National Guard, also based in the township, has its share of women paving the way for others in the field.

Jessica Lewis, 41, an aircraft maintenance squadron commander, and aircraft mechanics Michele Sangillo, 28, and Christine Ampole, 30, all say they love the family atmosphere the National Guard has provided them.

As commander, Lewis is responsible for leading, training and supporting the aircrew under her command. She also works directly with the 177th’s administrative programs and maintenance production.

On the job, Sangillo and Ampole inspect and maintain the aircraft and troubleshoot problems in addition to other duties.

Lewis enlisted in the service to help pay for her education and never left. While she didn’t always have a love of aviation, she was always dedicated to the military and its mission.

“It’s always something new,” she said of her job. “It’s never mundane. The constant churn of different events keeps it entertaining and exciting.”

Ampole joined the service in 2013. When she came across the aircraft mechanic job, she found it challenging and exciting.

Sangillo was doing business development and marketing for a credit union before joining the National Guard. While looking for a new career path, a friend told her to look into the Air Force.

Soon after, she had met a few 177th members at a restaurant and picked their brains about the job. The rest is history.

Sangillo likes the pride her job gives her. The biggest challenge is the responsibility the mechanics carry on their shoulders.

“We’re the last eyes on the jet before the pilot gets in,” she said.

As women in their roles, they typically receive praise for being in a male-dominated field, which is usually followed up with questions about what the job entails.

“Never underestimate your abilities,” Lewis said. “You are confident and capable, if not more. I learn that every day working (at the 177th).”

Ampole and Sangillo added that although the culture of women in male-dominated fields is constantly changing and improving, they should never be afraid to be outnumbered.

For Garnett in the Coast Guard, she loves teaching junior members about what it’s like to be an aviator.

“As women, we need to band together, find our allies and encourage each other to pursue our greatest dreams. Nothing, absolutely nothing, is impossible.”

As Coast Guard pilots, Steinbeck and McGee respond to search-and-rescue cases over water and participate in flight training, among other tasks.

McGee called the job rewarding, as she said being 30 feet above the water and working with another pilot, a flight mechanic and a rescue swimmer is “truly a team activity.”

She added that in the Coast Guard, women (her husband is also a Coast Guard pilot, and they have two small children) don’t have to sacrifice having a family for a career.

Steinbeck, too, loves the people she works with and said the most challenging aspect of the job is the unknown.

“As a call comes in for a search and rescue, you don’t really know what you’re getting yourself into,” she said. “You get some of the facts, but by the time we get out on scene a lot of that can change. Fortunately we train for that every single day.”

And while she’s happy “there are strong, independent women out there that are setting the example,” she said it’s just the start.

“When young girls see that, that’s the initial drive — knowing that you are absolutely capable to do anything and everything” she said.

MAYS LANDING — Give back. See the glass half full. Ask questions. Learn to pivot.

The Coast Guard rescued a kayaker who was in distress Thursday off Longport.

U.S. Air Force Staff Sgt. Christine M. Ampole, a crew chief at the 177th Fighter Wing of the New Jersey Air National Guard, checks a U.S. Air Force Thunderbirds F-16 for safety ahead of the Atlantic City Airshow in 2019 at the base in Egg Harbor Township.

U.S. Air Force Lt. Col. Jessica A. Lewis, 41, commander of the 177th Aircraft Maintenance Squadron, works in her office March 14 at the 177 Fighter Wing in  Egg Harbor Township. Lewis has been with the 177th Fighter Wing for over 20 years.