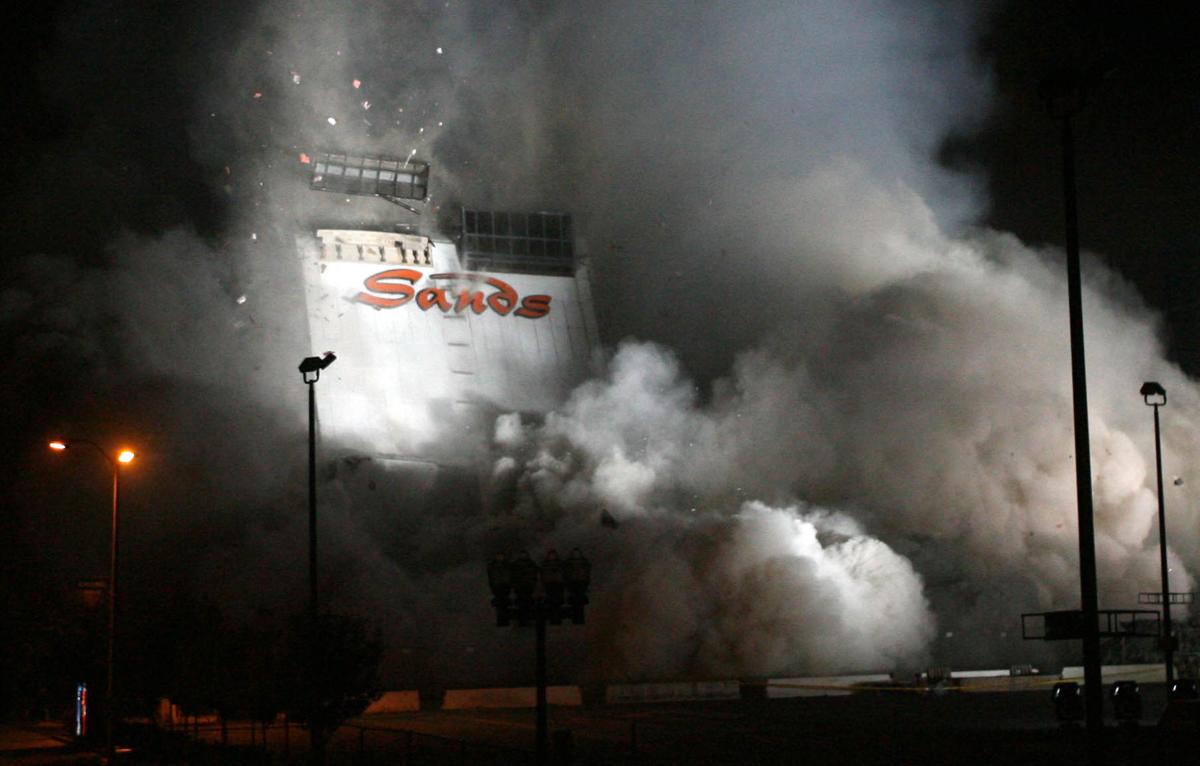 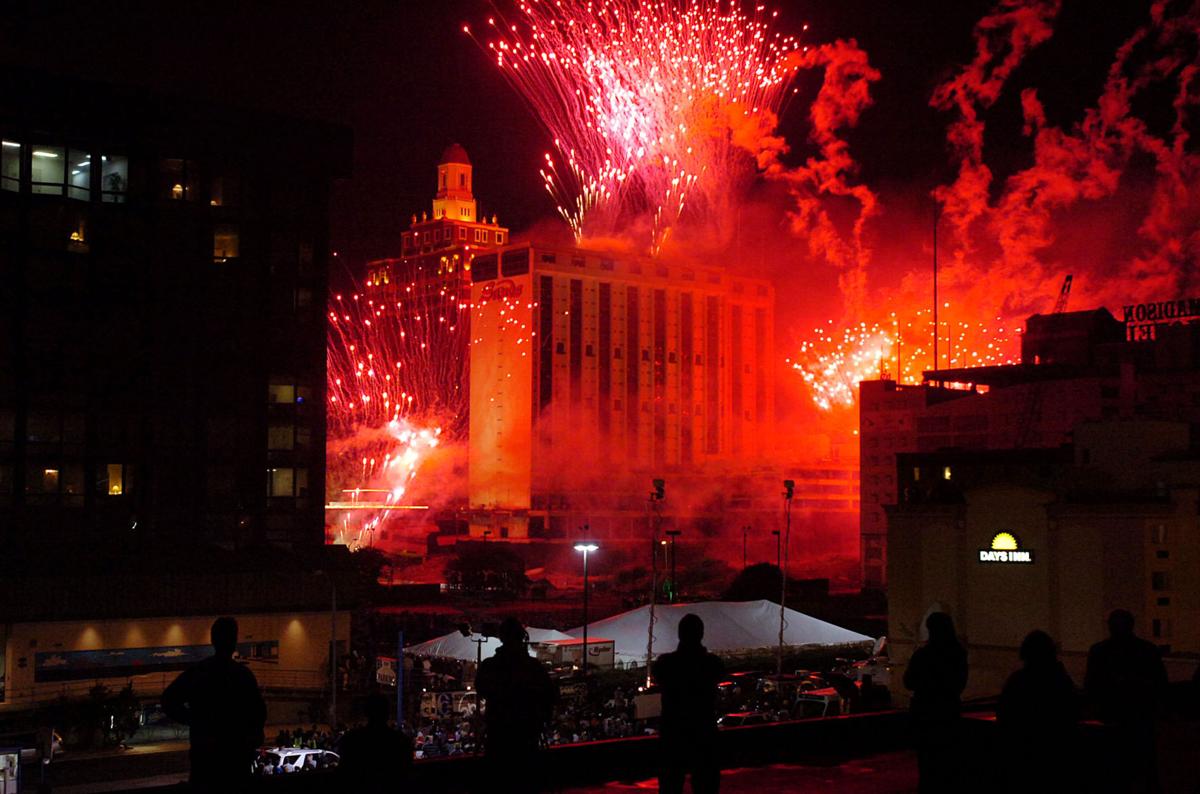 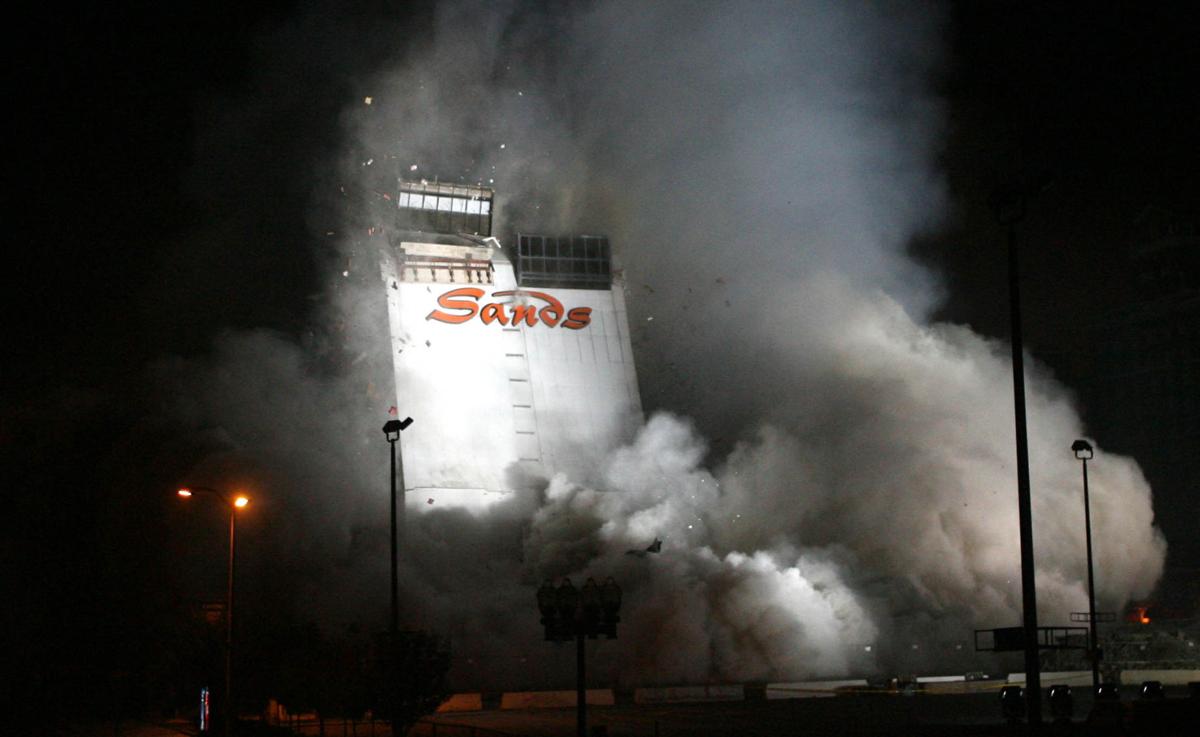 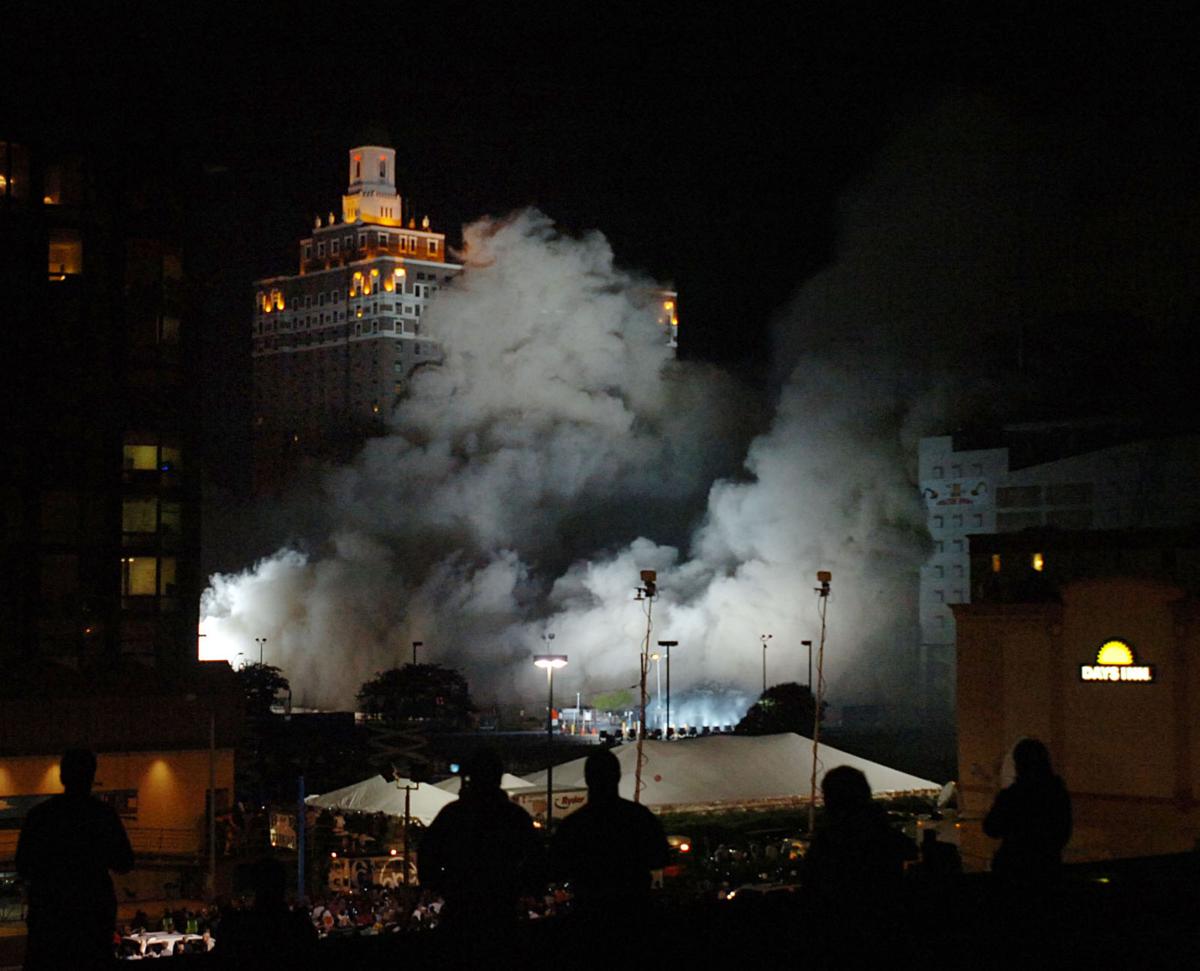 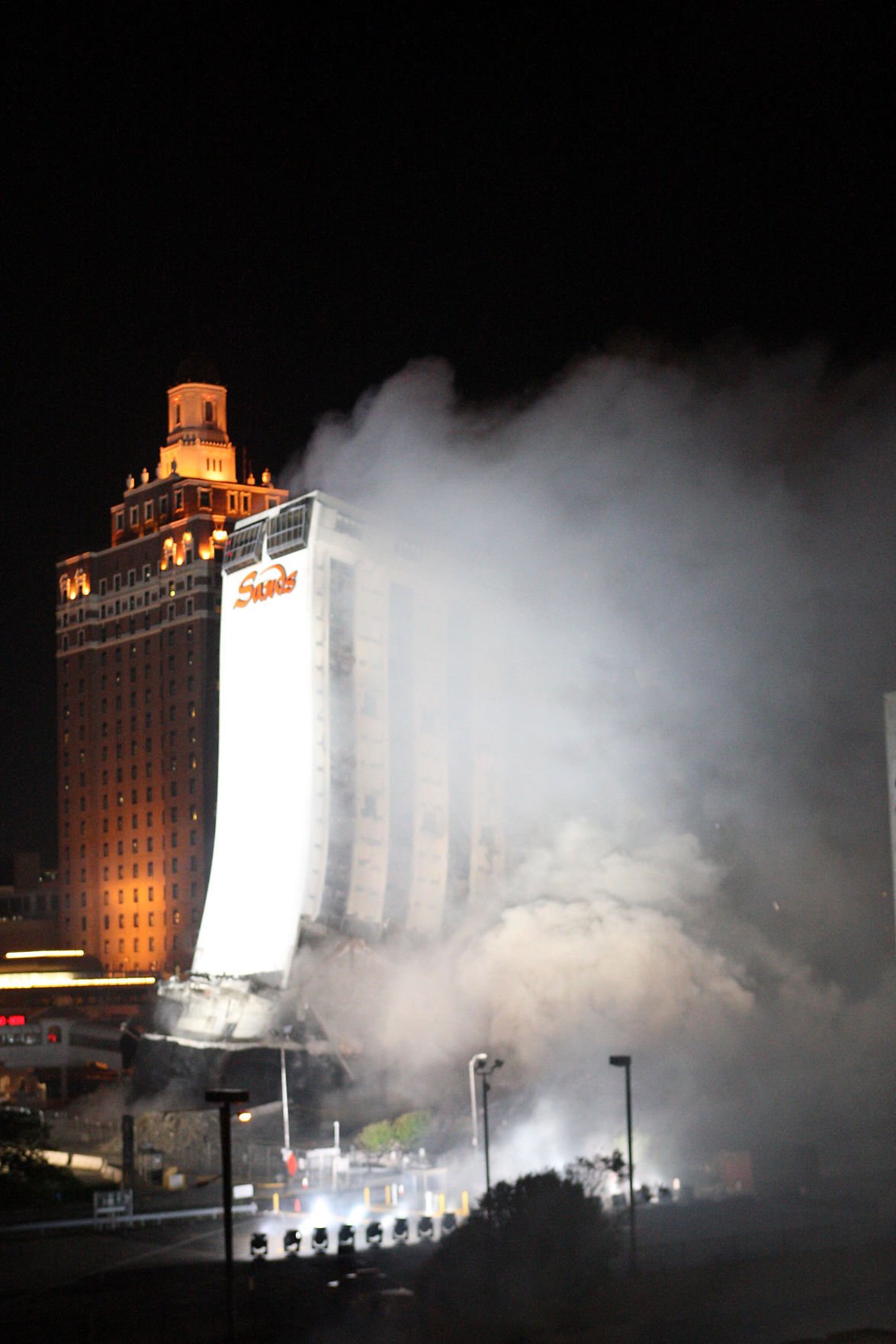 THE SANDS IMPLOSION / CASINO CRUMBLES IN LESS THAN 20 SECONDS

ATLANTIC CITY -- The Sands is now little more than sand.

The casino collapsed like a house of cards in a spectacular implosion Thursday night that reduced its 21-story hotel tower to rubble in just seconds and brought some Las Vegas-like flashiness to the Boardwalk.

As if a giant curtain had descended for the Sands' final act, the remnants of the casino disappeared in a billowing dust cloud that blanketed everything in its path as it blew inland.

An estimated crowd of more than 100,000 people lined the beaches and Boardwalk and cheered wildly at the spectacle. The show began with a shimmering fireworks and light display that served as a dramatic prelude to the Sands' destruction.

At 9:37 p.m., with a deafening rumble, a series of bangs and thud-like explosions ripped through the building before the Sands collapsed upon itself in a heap of concrete and steel.

"It's almost as if you lock your knees and someone taps you from behind," Thomas J. Dowd, of implosion contractor Controlled Demolition Inc., explained of the process for bringing down the building.

The Sands was razed to make way for a $1.5 billion to $2 billion megaresort planned by Las Vegas-based Pinnacle Entertainment Inc. Construction is scheduled to begin next year, with a grand opening in late 2011 or 2012.

"We have a footprint here where we can build a Las Vegas-style casino," declared Dan Lee, Pinnacle's chairman and chief executive officer. "We're going to have attractions that are better than Las Vegas."

Moments later, Lee and Gov. Jon S. Corzine pushed an old-fashioned explosives plunger that served as a prop to begin the implosion.

"This is more than an implosion. It's an explosion of opportunity," Corzine said, hailing Pinnacle for helping to lead Atlantic City's redevelopment.

The Sands, which closed Nov. 11 after 26 years in business, was destroyed in less than 20 seconds by explosive charges planted on five floors. Nearly 400 pounds of dynamite blew away the support structure, and then gravity took over to bring the building crashing down.

The remains of the building plopped into an empty lot where the famed Traymore Hotel once stood. The Traymore was imploded in 1972 and now that site will be combined with the Sands property to create an oceanfront setting for Pinnacle's new casino resort.

Pinnacle borrowed from the extravagant demolitions that occur semi-regularly on the Las Vegas Strip to stage Atlantic City's first casino implosion. But the fireworks displayed that preceded it, had a distinct New Jersey flavor.

A medley of Frank Sinatra, Bruce Springsteen and Bon Jovi songs accompanied what was billed as New Jersey's largest fireworks display ever. The Sands tower served as a backdrop for an extravagant show that illuminated the nighttime sky. Fireworks seemed to dance and bounce off the Sands.

On the Boardwalk, it was a party atmosphere, as people crammed together to get a view of the action. Many took pictures with small cameras or cell phones, as they talked about the implosion being an historic moment for Atlantic City.

Most of the prime viewing spaces were taken by 7:30 p.m., two hours before the fireworks went off. People camped out on the beach, stood on the walkways over the sand or sat on balconies or in the windows of neighboring hotels to gain a vantage point.

Fred Johnson, of Atlantic City, who worked at the Sands for about five years, arrived at the Boardwalk and Indiana Avenue at 2 p.m. to reserve his space.

"I would like to see it come down," Johnson said. "It was the last real job I ever had."

After the building was reduced to rubble, Johnson said it was worth the wait.

"Since I'm disabled, I haven't seen too much in my life," he said. "These few minutes have made up for all the things I missed in the last couple of years. I'll always remember this moment."

But Johnson said the implosion was also sad because he felt like he lost a friend.

Nick and Carol Kronyak, of Hasbrouck Heights, said they stayed in Atlantic City on Tuesday and Wednesday nights, and extended their stay when they learned the Sands was about to go down. They got to Indiana Avenue and the Boardwalk at 6 p.m.

"It's scary, my heart is pounding," Carol Kronyak said when it was all over. "You'll never see anything like that again."

"This is the spot," said Robert Mosetter, of Little Egg Harbor Township, as implosion hour approached. "We're going to feel it, see it, live it."

Afterward, he raised his fist in a joyous salute.

The Opa Bar and Grill was packed, as patrons were offered a prime viewing spot.

Former Sands employees Michael King, of Northfield, and Paula Blake, of Egg Harbor Township, sat at a table and reminisced about the years they spent together in the casino.

"It is amazing how the employees have stayed connected," King said.

They held a reunion recently and 250 people showed up for what organizers hope will become an annual event.

To prepare for the implosion, demolition crews reduced the hotel tower to a concrete and steel skeleton. Contractors stripped the building to the bare walls, removing asbestos and other hazardous materials to prevent anything toxic from mixing with the dust cloud.

Raising fears of airborne contaminants, the owner of a hotel across the street failed in a last-minute court fight to halt the implosion. Vincent Barth, of the Park Lane Apartment Hotel, alleged the Sands had not been cleaned of asbestos, but a state Superior Court judge ruled against him and allowed the implosion to go forward.

Pinnacle never thought of saving the Sands. Its odd location slightly off the Boardwalk and modest frontage along Pacific Avenue did not provide enough access, Townsend said.

"I think it was a beautiful, small boutique property in its day, but it didn't have a good location," said Kim Townsend, chief executive officer of Pinnacle Atlantic City.

The gaming hall opened Aug. 13, 1980, as the Brighton Hotel & Casino, switching to the iconic Sands name of Las Vegas fame the following year after a change in ownership.

In the Sands' heyday, its legendary Copa Room was a haunt of "Rat Pack" icons Sinatra and Sammy Davis Jr. and other A-list celebrities ranging from Cher to Robin Williams to Eddie Murphy. But the high rollers who made the Sands the "in place" in the 1980s and '90s jumped ship for the posh surroundings of the trendy Borgata Hotel Casino & Spa and other more modern gaming halls.

The Sands was a victim of its old age and a cramped casino floor that was the smallest in town. The huge casino that will replace it will be part of a multibillion-dollar building boom expected to bring three new gaming resorts and an array of upscale retail, dining and entertainment attractions to Atlantic City in the next five years.

"I think it's going to be a wave of change just like Las Vegas went through," Townsend said.

GALLERY: Look back at the implosion of The Sands Atlantic City

The building was imploded on October 18, 2007, the first-ever casino-hotel implosion on the East Coast.