The Kennedys will soon be gone in Congress. Unless Amy Kennedy beats Jeff Van Drew in New Jersey.
4 comments
Share this
{{featured_button_text}}
1 of 2 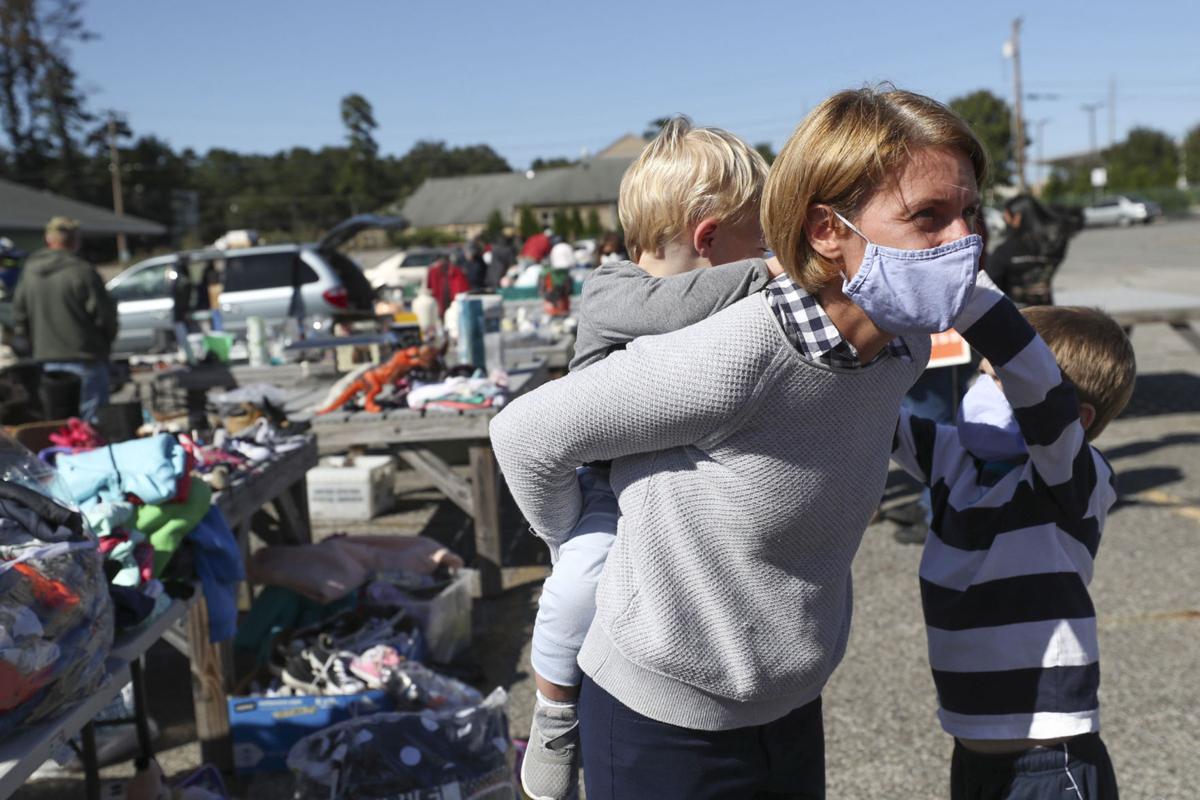 Amy Kennedy, Democratic nominee seeking to represent New Jersey's 2nd congressional district in the U.S. House of Representatives, meets with people at the Vineland Flea Market during a campaign tour of the area while she carries her son, Marshall, 2, on Saturday, Sept. 19, 2020. Kennedy is looking to unseat Jeff Van Drew, who switched to the Republican Party earlier this year. (Heather Khalifa/The Philadelphia Inquirer/TNS) 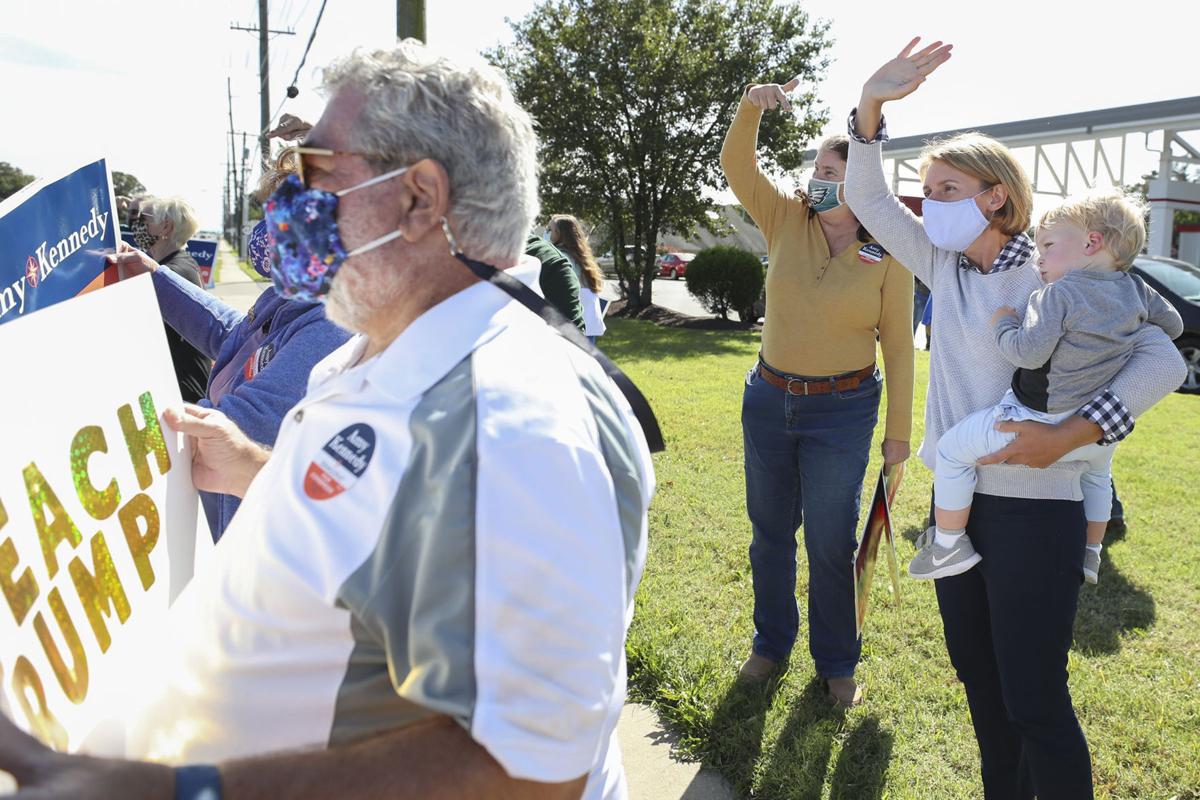 Amy Kennedy with campaign volunteers and supporters on Route 47 and in Vineland, N.J., on Sept. 19. (Heather Khalifa/The Philadelphia Inquirer/TNS)

Shane Harris was near a line of volunteers waving campaign signs at passing cars. Harris met Kennedy a few months ago, and had showed up again at a campaign stop here Saturday, this time with his adult daughter. He told Kennedy, who’s running for Congress in South Jersey’s 2nd District, that she had both their votes.

Harris, a Vineland police officer, voted to send Jeff Van Drew to Washington two years ago. He even phone-banked for him as a volunteer. So when Van Drew, a longtime Democrat, switched parties last year and pledged his “undying support” to President Donald Trump, Harris felt burned.

Kennedy has picked up many supporters like Harris since starting her campaign to unseat Van Drew, whose defection and opposition to impeaching Trump stoked fury among New Jersey Democrats. She said it was her own anger at Van Drew that sparked her decision to run. A 41-year-old former public schoolteacher, she won the July primary without the backing of South Jersey’s political establishment, with a message focused on her background as an educator and mental health advocate.

Another important element of her campaign: She’s a Kennedy.

If elected in November, Kennedy, whose husband is former U.S. Rep. Patrick Kennedy, will become the next member of a political dynasty whose power and influence span almost a century. If she loses, following U.S. Rep. Joe Kennedy’s unsuccessful Senate bid in Massachusetts, there will be no Kennedy in elected federal office next year.

Name not a burden

In an interview last week, Kennedy acknowledged her married name has helped raise money and form a robust campaign team. But she doesn’t feel the weight of the family’s history while she campaigns hundreds of miles from New England.

“Here, it’s not as big a deal,” she said. “And I’m trying to keep this focused on South Jersey, because it needs to be less about me and more about where we live and what the people here care about. And that’s health care, and jobs, and people who are worried about raising their kids.”

When talking to voters, she’s more likely to mention the family she was born into: four generations of Atlantic County residents who were part of local government, coached youth sports, and owned small businesses. Her father, Jerry Savell, was a county freeholder and a councilman in two townships. Michael Suleiman, chairman of the Atlantic County Democrats, said Kennedy’s roots matter more to voters than her husband’s.

“A lot of young folks don’t have the connection to the Kennedy name the way my parents do,” Suleiman said. “It might get you money and resources, but around here, it’s her family that is known for public service.”

Encompassing Atlantic, Cape May, Cumberland, and Salem counties, along with parts of four other counties, New Jersey’s vast 2nd District is a political battleground. More than 30% of registered voters aren’t affiliated with either party. Despite being held by a Republican for more than 20 years before Van Drew captured it for Democrats, the district voted twice for Barack Obama before backing Trump by 1 percentage point.

Van Drew, 67, a longtime Democrat in the State Senate with a conservative stance on guns, was seen as the ideal candidate to flip the seat. He won with 53% of the vote and helped Democrats gain their majority. Less than a year after getting to Washington, he was a Republican.

She was a middle school teacher in 2010 when she met Patrick Kennedy, who was visiting Atlantic City to speak at a charity event. They now live in Brigantine. She is education director of the Kennedy Forum, founded by her husband, where she advocates for education and mental health policy.

Doug Rubin, a Boston-based political strategist who advised Joe Kennedy in his 2012 House campaign, said the Kennedy name still means something to voters, no matter where they are.

“But there’s also an advantage that carries nationally, in terms of being able to raise money and make a name for yourself, and that is undeniable,” he said. “It just helps you shine a bigger spotlight.”

That financial advantage was on display in the primary, when she raised $1.4 million compared to $415,600 for Brigid Callahan Harrison, the preferred candidate of the famed South Jersey Democratic machine. In the general election, Kennedy is outspending Van Drew on the airwaves more than ninefold so far. From the day after the July primary through last week, Kennedy had spent about $844,000 on TV ads, compared to just $90,000 for Van Drew, according to the ad tracking firm Advertising Analytics.

It’s unclear why Van Drew isn’t heavily spending 41 days before what’s expected to be a hotly contested election, one the nonpartisan Cook Political Report, which tracks House races, rates a “toss-up.” His campaign raised about $435,000 in the most recent quarter and had $1.2 million as of June 30. Kennedy raised about $726,000 last quarter and spent much of it winning the primary, finishing June with $137,000 in the bank.

But a fresher picture of their campaigns’ finances won’t emerge until next month, when the next federal filings are released.

Van Drew enjoyed an initial surge in small-dollar donations from Trump supporters after his party switch. The president also appeared at a celebratory rally with him in Wildwood in January, and Van Drew got a speaking slot at last month’s Republican National Convention. But the campaign arm for House Republicans hasn’t gone to the airwaves on his behalf yet, according to Advertising Analytics, nor have any outside GOP super PACs.

Ron Filan, Van Drew’s campaign manager, didn’t address why Van Drew has yet to take to the airwaves in force, pointing instead to the money Kennedy and her family have earned from the Kennedy Forum. The organization receives funding from drug manufacturers and addiction-treatment companies. Patrick Kennedy founded it in part to advocate for mental health care, citing his past struggles with addiction.

“The Kennedys have made millions of dollars via their tax-exempt nonprofit foundation off of the big pharmaceutical companies that Amy now claims she’ll stand up to for raising prescription drug prices, which they’ve used to fund a lavish millionaire lifestyle that includes a mansion on the water,” Filan said.

Kennedy responded in a statement: “It’s beyond disappointing that Jeff Van Drew would somehow try to turn my work at The Kennedy Forum and my husband’s tireless advocacy and leadership to address the silent epidemic of mental health into something negative.”

That South Jersey’s Democratic power brokers didn’t want her allowed Kennedy to position herself as a political outsider — never mind her own wealth and political connections.

Most first-time candidates can’t loan their campaigns $500,000, as she has. When Kennedy invited Martin Luther King III to a protest outside Trump’s rally in Wildwood, the longtime Kennedy family friend was by her side.

“Amy brings positivity,” King, the eldest son of civil rights leader the Rev. Dr. Martin Luther King Jr., said in an interview. “We need people who are going to bring the country together, and that’s the energy she sends out.”

Kennedy has spent the last two months traveling the district, often trailed by some of her five young children, ages 2 to 12 (the oldest from a previous marriage). On a tour through Cumberland County on Saturday, she hewed close to the campaign message Democrats across the country are deploying, centered on the economy and health care — plus her own focus on funding mental health treatment.

During a stop at the Vineland Flea Market, one man insisted on showing Kennedy some Trump memes on his phone.

Looking uncomfortable, Kennedy suggested they take a selfie together so it would appear at the top of his social media feed.

In Millville, she spent 15 minutes talking to Scott Guzman, co-owner of a Latin American restaurant and market, about the challenges he’s faced this year during the pandemic.

Guzman, 41, said afterward that he had never voted before. A day later, he registered.

“It’s time for change,” he said. “We definitely need more women in power, and I like that this is her first time. She’s somebody new who hasn’t been in politics with all the same people.”

MILLVILLE — Police are investigating after a 29-year-old city man was shot in the leg Friday evening.

Congressman Jeff Van Drew, R-2nd, and Democratic challenger Amy Kennedy, of Brigantine, will face each other Thursday night in their first and…

Amy Kennedy, Democratic nominee seeking to represent New Jersey's 2nd congressional district in the U.S. House of Representatives, meets with people at the Vineland Flea Market during a campaign tour of the area while she carries her son, Marshall, 2, on Saturday, Sept. 19, 2020. Kennedy is looking to unseat Jeff Van Drew, who switched to the Republican Party earlier this year. (Heather Khalifa/The Philadelphia Inquirer/TNS)

Amy Kennedy with campaign volunteers and supporters on Route 47 and in Vineland, N.J., on Sept. 19. (Heather Khalifa/The Philadelphia Inquirer/TNS)